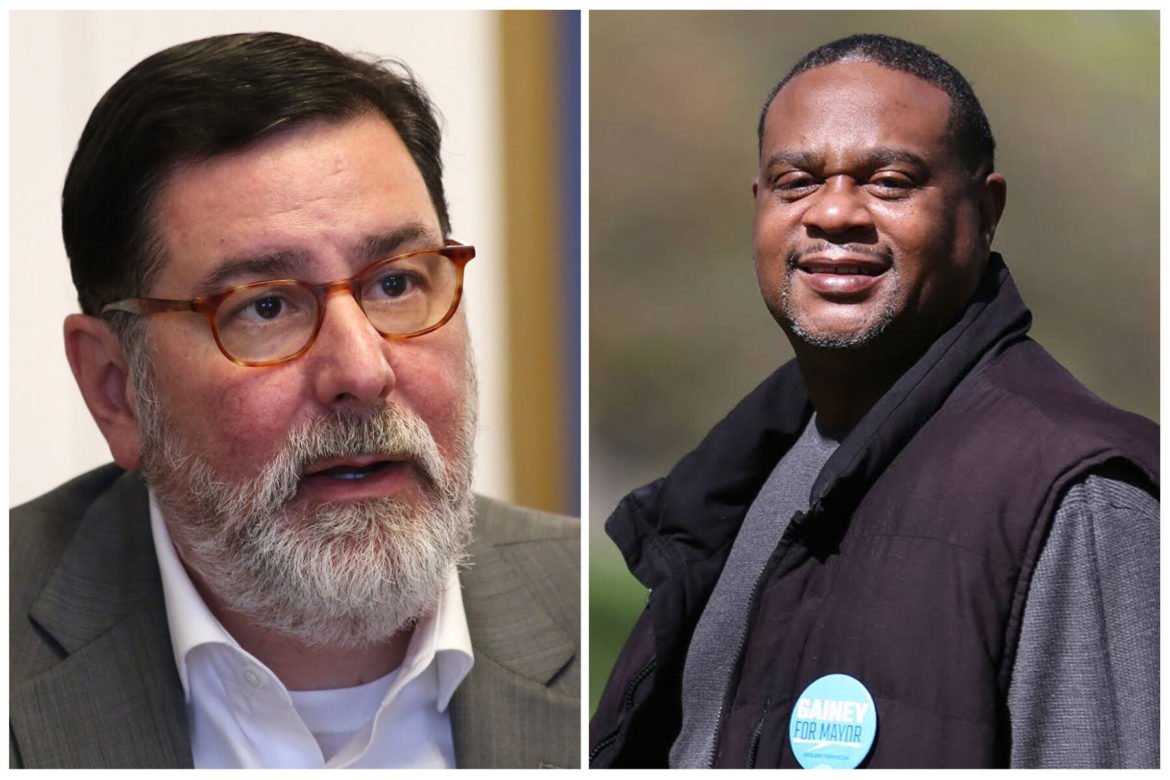 The financial records of their campaigns show markedly different strategies and donor bases. While Peduto holds a major financial advantage, raising far more money and pulling in tens of thousands of dollars in out-of-state contributions, Gainey leads in small donations and has more evenly dispersed support across the city.

PublicSource analyzed each candidate’s donations. Most are within Pittsburgh city limits but some are as far as California, Florida and Massachusetts.

Peduto, who spent years on City Council before his two terms as mayor, outraised his challengers with almost $900,000 from Jan. 1 through May 3, compared to Gainey’s $307,000, according to county campaign finance records. Additionally, Peduto came into 2021 with more than $180,000 in his campaign account, while Gainey entered the year with $2,600.

Still, Gainey’s fundraising shows he is a more legitimate challenger than what Peduto faced in his last reelection campaign in 2017. Then, neither of Peduto’s two challengers raised more than $30,000. Gainey is not a newcomer to local politics; he worked in city government under Mayors Luke Ravenstahl and Tom Murphy and has represented the 24th State House district since 2013.

These maps show the Pittsburgh-based donors of more than $250 for Peduto (top) and Gainey (bottom). Peduto’s money is much more concentrated than Gainey’s, coming mostly from the Squirrel Hill and Shadyside area he formerly represented on City Council, and the Downtown business district.

Gainey’s large donors are more dispersed across the city. Like Peduto, Squirrel Hill is one of his strongest areas, though his donors also have a big presence in Highland Park and a number of smaller outcrops of donors in neighborhoods along the rivers and outside the city to the east.

Peduto campaign spokesperson Matt Harrison said that “out of nearly 1,000 contributions in any amount from across the region, over 400 were from outside the East End and Downtown. This is a testament to the broad base of support that Mayor Peduto has built across all of our neighborhoods.”

A Gainey campaign spokesperson said that their effort “has been powered not by the wealthy and well-connected, but by everyday Pittsburghers, in every neighborhood, standing up for a vision of a better tomorrow.”

The mayoral election drew money from across the United States. Peduto pulled in more from locations throughout the United States while Gainey did a larger share of his fundraising in Pennsylvania.

Peduto reported more than $175,000 from out of state: more than $20,000 each from New York and California, more than $25,000 from Massachusetts, more than $40,000 from Ohio, and thousands more from Connecticut, Delaware, Florida, Illinois, Indiana, Maryland, Michigan, Missouri, New Jersey, Texas, Washington, West Virginia and the District of Columbia.

Gainey, meanwhile, raised more than $1,000 in just four states other than Pennsylvania: California, Georgia, Maryland and New York, with no more than $5,000 coming from any.

While Peduto has a bigger purse, Gainey outraised him when it came to smaller contributions, reporting more than $101,000 from donations under $250. Peduto, in comparison, raised about $64,000 from such donations.

The two other candidates that appear on the ballot are retired police officer Tony Moreno and math tutor Michael Thompson. Moreno reported raising fewer than $25,000 between Jan. 1 and May 3, and Thompson did not file reports.

The official campaign filings don’t tell the full story of the money in this race. Outside political action committees, or PACs, have raised hundreds of thousands of dollars, mostly coming from unions. These PACs go largely unchecked by the campaign finance regulations that apply to candidates’ official campaigns. SEIU Healthcare has thrown its support behind Gainey through a PAC called Pittsburgh Justice For All that had more than $400,000 on hand in early May — more than Gainey’s official campaign raised itself. 32BJ, a separate wing of SEIU that represents service workers, supports Peduto through a PAC called Good Jobs Pittsburgh, which held $133,000 in early May through large donations from labor unions.

Neither PAC has to spend its money by Election Day, and they aren’t required to spend it on either of these candidates. Final fundraising and expense reports, which will include spending since May 3, are due 30 days after the election.

WTAE reported last week that another PAC with ties to Gainey, African Americans for Good Government, had failed to properly report some fundraising in recent years. Gainey said he “has nothing to do” with the group’s finances while pro-Peduto ads have been keying on the WTAE report. The elections division has asked the county police department to investigate the matter.

We obtained each campaign’s total funds raised between Jan. 1 and May 3 through campaign finance reports that are required to be filed with the county. Campaigns must include donors’ addresses on these forms, so we were able to use ArcGIS/ESRI’s geocoding services and visualization software to produce these maps. There was one unique address from Gainey’s donations that was not able to be geocoded, so this address does not appear in our maps. Campaign filings can contain errors; we included exactly what the campaigns reported to the best of our knowledge.

Satvika Neti is graduating from CMU Heinz in May with a MS in Public Policy - Data Analytics. She can be reached at neti.satvika@gmail.com or on twitter at @satvikaneti.