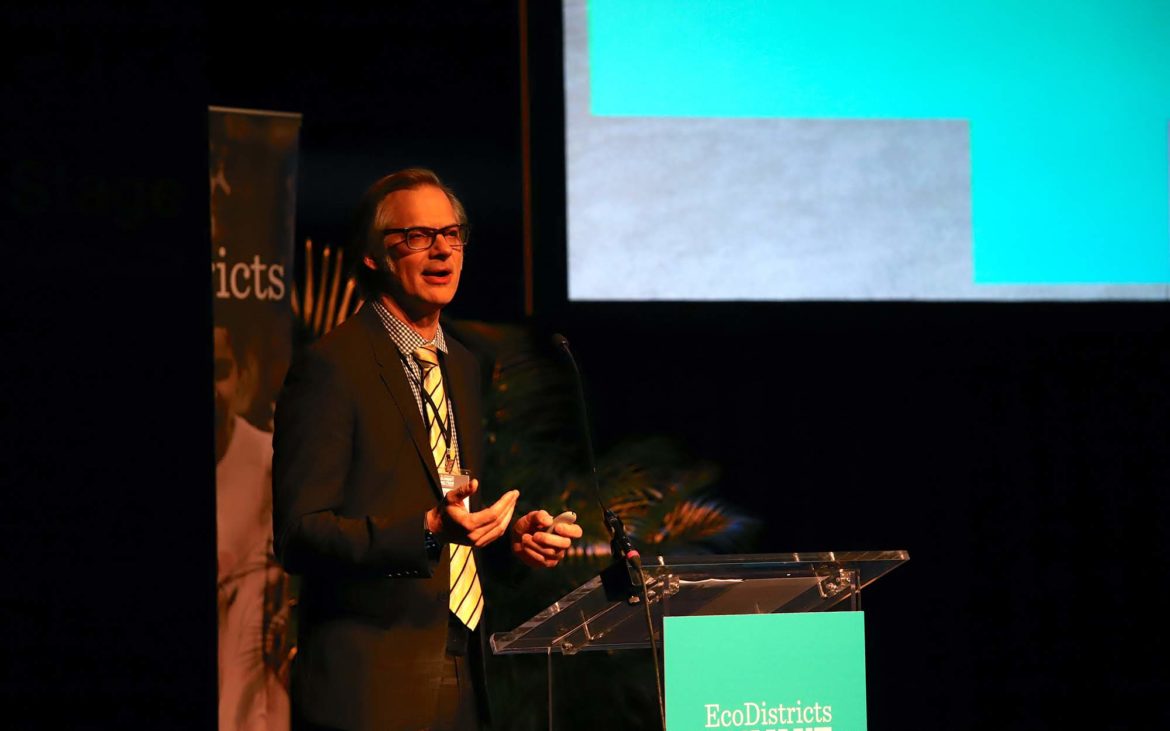 Rob Bennett, founder and CEO of EcoDistricts, addressing attendees of the EcoDistricts Summit on Nov. 4, 2019. (Photo by Jay Manning/PublicSource)

Mayor Bill Peduto on Monday laid out Pittsburgh’s aspirations to be a leader in embracing ideas of equity, resilience and climate protection.

“For decades, we wanted to be the example of a post-industrial city,” Peduto said at the 10th annual EcoDistricts Summit. “We’ve broken from that. Today, we want to be the model of a 21st century city. We want to be able to recognize that we did get past those challenges of generations ago, but we have a whole series of challenges we face today.”

EcoDistricts, a Portland-based nonprofit focused on building sustainable cities, awarded Pittsburgh with a CityMakers Award for its dedication to incorporating the EcoDistricts Protocol into city planning. Pittsburgh’s first project to adopt that protocol was the creation of the EcoInnovation District in the Uptown neighborhood. The district focuses on community revitalization while improving the environment, job growth and support for residents.

This week the city released the Neighborhood Plan Guide, which outlines how the EcoDistricts framework will merge with the city’s goals. The public can review and comment on the draft of the guide through December 12.

At the summit, Peduto and Allegheny County Executive Rich Fitzgerald explained how far the Pittsburgh-area has come since dramatic population loss and high unemployment following the collapse of the steel industry.

When asked how the city is dealing with gentrification, Peduto referenced the creation of the $10 million yearly Housing Opportunity Fund, made possible with an increase to the real estate transfer tax. He also highlighted a goal to keep the vacancy rate of new development from 10% to 15%, in order to ensure there’s room for lower-cost housing.

“One of the ways we look to address affordability in housing is through energy efficiency,” Peduto said. Upgrading older homes, for instance, could reduce the use of gas for heat in the winter and electricity for cooling in the summer.

Though EcoDistricts focuses on a bottom-up approach of building up cities through their neighborhoods, both Peduto and Fitzgerald spoke about the need for more state and federal action on green energy. Peduto, in support of a carbon tax, called on voters to push their Congress representatives to support the measure.

Fitzgerald stated a need for “a national policy that incentivizes renewables, and in many ways, dis-incentivizes fossil fuels.”

Later in the day, Grant Ervin, Pittsburgh’s chief resilience officer, criticized the reliance on incentives, adding that he wasn’t specifically picking on Fitzgerald for his comment.“It’s not about incentives, it’s about conscious decisions that we make.” Ervin spoke about the need to think critically as individuals about everyday choices: how we get to work, how we heat and cool our homes, what we purchase.

At the conference, the Borough of Etna was lauded as the first-ever community awarded the EcoDistricts Certified status. This standard is awarded to communities that have completed and followed the EcoDistrict Protocol, which outlines how to convene stakeholders, assess baseline performance and develop a roadmap towards achieving future targets.

Etna has set goals to reduce energy consumption by 50% before 2030 and to achieve carbon neutrality by 2050.

Below are notable excerpts from the summit’s panels and speakers.

Present and future of Pittsburgh neighborhoods

Forbes Fund President Fred Brown highlighted the obstacles that Pittsburgh neighborhoods face because of racial inequity, including the disproportionate impact of the justice system on Black residents.

Brown spoke of Larimer as a community with forward momentum, despite the obstacles. “When you think of a Larimer, sprouting up out of that… that’s success.” Despite years of disinvestment, Larimer is benefiting from a $30 million Choice Neighborhoods grant awarded in 2014 for the creation of housing at the border of Larimer and East Liberty.

Ervin described the city’s overall commitment to sustainable development and community improvement through OnePGH, a planned collaborative between the city government, local nonprofits and corporations. 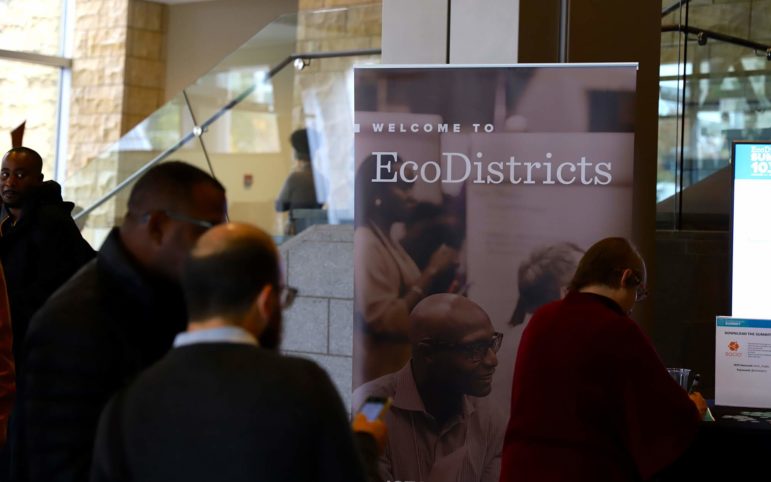 EcoDistricts attendees during a break period in the lobby of the August Wilson African American Cultural Center on Nov. 4, 2019. (Photo by Jay Manning/PublicSource)

Peduto presented the vision for OnePGH in April 2018. He recently said the initiative will cost around $4 billion and that he is seeking funding from local companies and nonprofits.

OnePGH includes proposed projects like universal pre-K and all-weather shelter for people experiencing homelessness, Ervin said. During the panel, Ervin said the initiative’s plans align with the United Nations Sustainable Development goals. “We’ve come up with 47 projects that the community can invest in, not just the city,” Ervin said.

Christine Mondor, Principal of evolveEA, underscored the impact that universities can have on Pittsburgh’s communities, saying they “have an obligation to intentionally address our communities.”

Mondor, who is also chair of Pittsburgh’s Planning Commission, said universities should have a stated commitment to their communities. “They need to talk about what best practices are, how you engage long term and not just for transaction, but for transformation,” Mondor said.

As cities continue to grow and redevelop, spatial justice and active listening could help ensure that development projects help improve quality of life in underserved communities, according to designer and urbanist Liz Ogbo.

Ogbo, founder and principal of Studio O in San Francisco, explained that spatial justice “means that justice has a geography, and that the outcome of a distribution of access, services and outcomes should be a basic human right.”

Examples of spatial injustice are neighborhoods which lack access to public transportation, have dirty power plants or other industry buildings and face urban blight, rather than the development of green spaces.

Ogbo highlighted the impact that the physical, built environment has on residents and their collective experiences. She pointed out that environmental issues and urban design have an impact on residents depending on race and class.

Many communities subject to spatial injustice have already gone through periods of neglect and divestment, Ogbo said. This divestment puts additional responsibility on those who hope to service communities to hear the experiences of local community members and try to understand the context of their stories.

One case study she highlighted was the closure of a power plant in the neighborhood of Bayview-Hunters Point in San Francisco, a historically black and low income community. Local activists successfully lobbied the city to close the plant in the 1990s. The closure left a 30-acre area of asphalt where the power plant once stood, that, for safety reasons, couldn’t be developed on for over a decade. In 2013, Ogbo and her collaborators sought to find temporary uses for the space, to transform it from an area of blight to a community space for events and social gatherings.

Despite the temporary solution, residents still feared gentrification as San Francisco looked to sell that 30-acre plot to a developer which, residents worried would build luxury condos in their neighborhood. The site still holds events, though the city approved a different luxury condo construction project in the neighborhood in 2015.

Ogbo talked about the importance of being an “intentional accomplice” in the stories of the communities that organizations serve. This approach, she said, means being an active advocate for change and putting resources, money, and reputation on the line in solidarity with communities who have a lot to lose.

Pittsburgh is among seven cities creating a Water Equity Taskforce tasked to ensure equitable access to water infrastructure. UrbanKind Institute CEO Jamil Bey is helping lead the project locally. Pittsburgh is still finalizing its roadmap, which Bey said puts the city in a good position to learn from cities like Buffalo, New York, and Louisville, Kentucky, and adapt their solutions to Pittsburgh’s needs. The national project is being organized by the US Water Alliance.

UrbanKind, a research and policy “think-and-do” tank, is collaborating with the Pittsburgh Water and Sewer Authority [PWSA], community leaders and organizations.

Some of the challenges facing Pittsburgh are water quality, affordable water pricing and combined sewage overflow. The task force also wants investment in workforce development to train new infrastructure employees and is open to working with the unions to help achieve this.

One issue unique to Pittsburgh is the PWSA’s relatively small size, compared to other cities. This makes affordable pricing more difficult, Bey said, because the cost can’t be spread over a large number of households. The issue is more stark in smaller communities in the Pittsburgh area that have their own water authority.

Still, Bey stressed that local partners were coming to the table, and the task force hopes to have a complete roadmap soon.