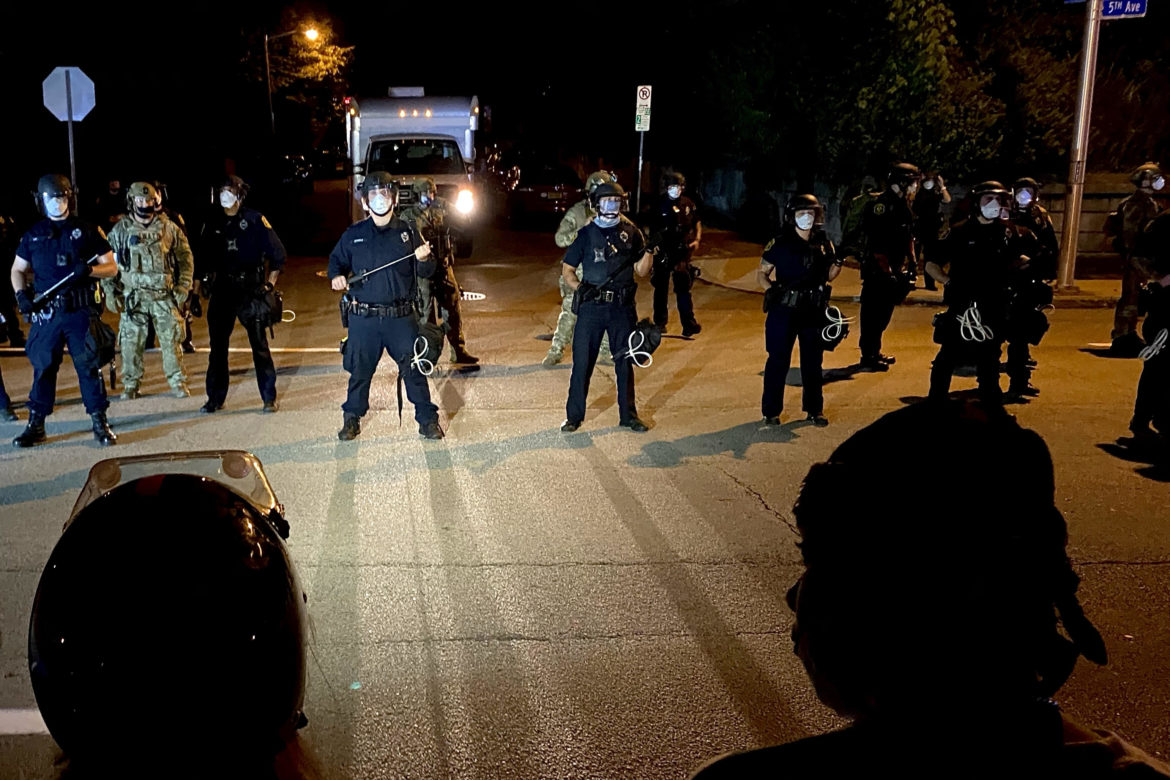 A group of law enforcement officers stands in a line on Fifth Avenue in Shadyside on Wed., Aug. 19, 2020. (Christian Snyder for PublicSource)

A controversial 'pop-out' arrest of a protest marshal by city police on Saturday, Aug. 15, led protesters to the doorstep of Mayor Bill Peduto's Point Breeze home several times this week.

"Hey hey, ho ho, Mayor Peduto has got to go," was among the chants calling for his resignation during demonstrations that lasted for hours into the night and early morning and ended in police using force to disperse protesters from the neighborhood on Wednesday night.

On Friday, the mayor issued a statement announcing changes in the command structure and prohibiting the use of ‘jump-out’ arrests during protests, but it remains to be seen if his latest actions will be enough to quell protesters’ demands.

Prior to Peduto's announcement, activist Lorenzo Rulli said protesters were calling for the mayor's resignation "because he’s a white man who doesn’t take accountability, responsibility, nor does he make true statements to the media or the people that he wants to keep him in office... He’s not the people’s mayor; he’s the police’s mayor.”

Peduto has joined a growing list of mayors and other public officials facing protests outside their homes and mounting pressure to resign.

How much power do mayors actually have over police reform?

It depends on the city, said Yucel Ors, the program director of public safety at National League of Cities. Mayors do not have control over the day-to-day operations of the police department or the hiring and firing of individual officers, and the municipal charter or state laws may limit local government’s authority to make significant changes to policing, he wrote in an email to PublicSource.

Yet local elected officials approve the police budget, which often “establishes the priorities and programs on how the police department will serve and protect their communities,” Ors wrote. Mayors also appoint public safety officials who can directly implement changes within a department. Peduto appointed Chief Scott Schubert in 2017 and Public Safety Director Wendell Hissrich in 2016.

Fraternal Order of Police Lodge 1 President Robert Swartzwelder told PublicSource on Thursday that because Pittsburgh’s police chief, public safety director and commanders all answer to Peduto, he can effectively do “anything he wants” to change policing strategy. While the mayor can’t rewrite policies, he can restrict police actions, including the use of force and pepper spray, and has done so “multiple times” since the protests began, Swartzwelder said.

PublicSource reached out to Peduto's office and Public Safety spokesman Chris Togneri for comment on what obstacles might prevent the mayor from implementing further police policy reforms but did not receive a response in time for publication.

George Dougherty, assistant professor at the University of Pittsburgh’s Graduate School of Public and International Affairs, said Pittsburgh has one of the few “strong-mayor” political systems in Western Pennsylvania, meaning the mayor has a “good amount of authority” to make change — but must do so “within the confines of the labor agreements of the police officers.”

Advocates of defunding the police have called for some police duties, like responding to mental health calls or domestic violence, to instead be handled by social workers or other civilian professionals. Yet union contracts typically preclude mayors from allocating police work to other entities, Dougherty said. The city currently has the right to subcontract out some public safety work, Swartzwelder told PublicSource in June. “We’re trying to get [the city’s power to subcontract] out of” the next contract, he said, which would start in 2023.

The union contract does govern how officers are disciplined.

“The fact is that, even if it’s doable in the long term, it’s just not necessarily something that can be done right away,” Dougherty said of implementing police reforms. “But that’s not an excuse for the mayor and for [city] council not to be creative” and find other strategic ways of implementing reform. For example, Dougherty said 911 responders could send mental health calls to both the police and professionals who help the caller navigate social services.

Sandra Susan Smith, a criminal justice professor at Harvard Kennedy School, also said mayors are limited by police contracts that give police protections. “I think their hands are often tied to these longstanding agreements that go years into the future,” she said. 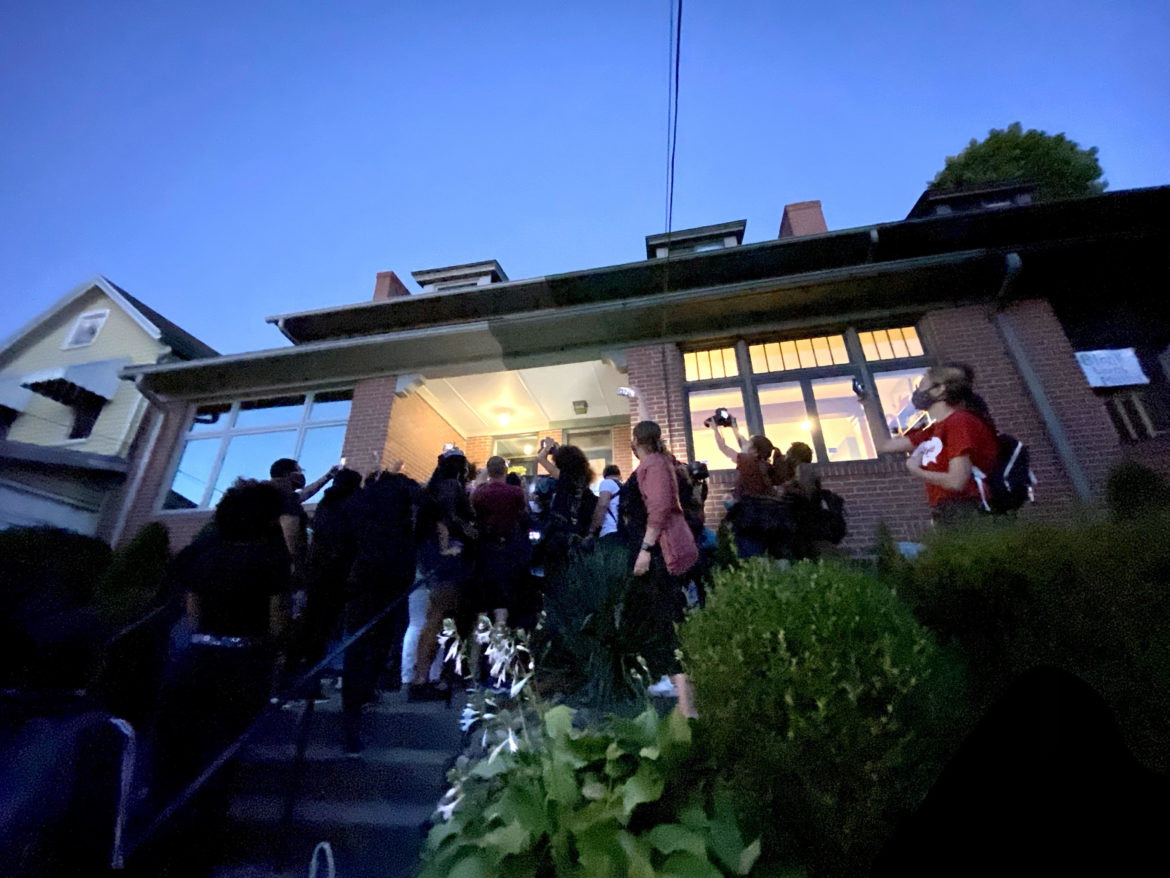 A group of protesters and media stand on the front porch of Mayor Bill Peduto’s residence Wednesday, Aug. 19, 2020, in Point Breeze, while conversing about Peduto’s politics and the city’s response to ongoing protests, including the arrest of a protest marshal by armed officers into an unmarked van on Saturday, Aug. 15. (Christian Snyder for PublicSource)

After a protest on June 1 in East Liberty, the mayor drew criticism over his statement at a press conference saying that “smoke, not tear gas” had been deployed. He later said he was misled. Togneri confirmed that tear gas had been used in East Liberty.

On Monday, after a “low-visibility arrest” caused public outrage, Peduto released a statement saying he “will never tolerate these tactics being used at peaceful protests again.”

On Friday, Peduto issued another statement announcing a number of policing changes, including assigning a new incident commander to oversee protests; assigning a new oversight and command structure for the Police Special Response Teams, which are trained in crowd-control methods; expanding the role of the Pittsburgh Police Community Engagement Office; and formally banning jump-out arrests of protesters by non-uniformed police in unmarked vehicles. “I have repeatedly watched interactions between police and protesters that escalated to uses of less-lethal weapons, arrest methods and other actions that I do not support, and which run counter to our common principles,” the statement said.

The city and police union have been in power struggles before. For instance, the Fraternal Order of Police and the city have been involved in an ongoing disagreement over how officers are questioned after they hurt or kill members of the public.

In June, The Allegheny County Black Activist/Organizer Collective issued a dozen demands to the city and county regarding police policies, budgets and staffing, including defunding and demilitarizing the police and ending “the criminalization of Black people.”

How mayors can affect the culture of policing

Smith of Harvard Kennedy School said it’s difficult for mayors to affect the culture of policing, which she said is “inherently racist” and has historically othered low-income communities of color, particularly Black communities.

“I don’t think [police reform] is something that can happen solely on the local level. I think there has to be shifts on multiple levels of government to remove some of the buffers, some of the protections that police have, so that accountability is a thing,” she said.

Swartzwelder said Peduto’s changing of policies puts police officers in a tough spot. “It’s paralyzing the decision-makers” within the bureau, Swartzwelder said. “Because they make a decision, he doesn’t like it, he threatens their job. So they have to make a choice: do they do what they were trained to do and risk getting fired?”

Peduto isn’t the only city leader protesters throughout the nation are visiting at home. Fake body bags were strewn across the lawn of Sacramento City Manager Howard Chan after a July protest calling for him to resign. Oakland, California, Mayor Libby Schaaf woke up to find her home covered in red paint and graffitied phrases like “Wake Up Libby” and “Blood on your hands” last month. And Chicago police have blocked protesters from demonstrating on Mayor Lori Lightfoot’s street altogether.

Only a few calls for resignation have been successful. In Philadelphia, managing director and Mayor Jim Kenney’s police liaison Brian Abernathy resigned in July amid pressure for police reform. In June, a small-town Alabama mayor resigned after criticizing the University of Alabama football team’s Black Lives Matter video.

Dougherty said protests can help bring attention to a cause and drive political agendas, but rarely are protesters’ exact demands met. “It’s an important part of the political process, but it doesn’t simply override all the other public processes we have, which are centered around representative democracy,” he said. 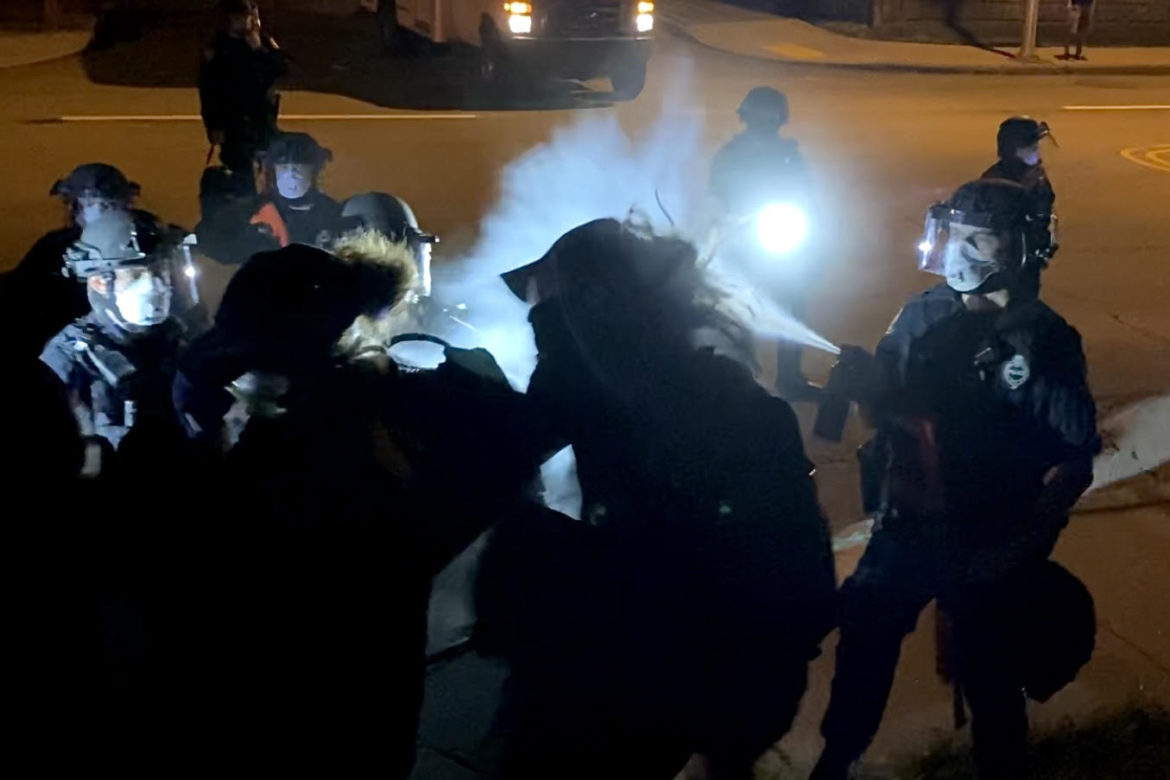 A police officer sprays a canister of chemical irritant from close range at a protester’s face in Shadyside on Wed., Aug. 19, 2020.  (Christian Snyder for PublicSource)

Who would be mayor if Peduto resigned?

If Peduto were to resign, City Council President Theresa Kail-Smith would be next in line for office. Kail-Smith declined to comment on steps she would take were she to become mayor, but said she has attended several protests and feels “that there are things that we need to change.”

She said she wants to implement policy changes that are well thought out, rather than reactive. “We need to understand before we start delving into throwing policy and legislation on the table… we need to make sure we have a sustainable effort in the change in the culture in policing, so our communities feel more safe in general,” she said. She said she organized a meeting with city council and Public Safety leaders on Aug. 27 to review police policies.

Rulli said Kail-Smith has not been responsive to his and other activist’s demands. “I feel like Theresa Kail-Smith, her white silence equals Black violence,” he said. “So, if Theresa Kail-Smith were to be in that position, she would be held just as accountable as Mayor Bill Peduto.”

Despite being critical of Pedutor’s handling of the protests, Swartzwelder said he doesn’t think Peduto should resign. “If he does that, he’s just bending to the will of these protesters,” he said, “and you’d allow protesters to dictate how society should be run.”

Dougherty said there’s “really no basis” to demand Peduto’s resignation, as it falls outside of the established political process.

“My response to anybody who’s really, really upset about who’s in office is, well, then run,” Dougherty said, “or find somebody who will run.”