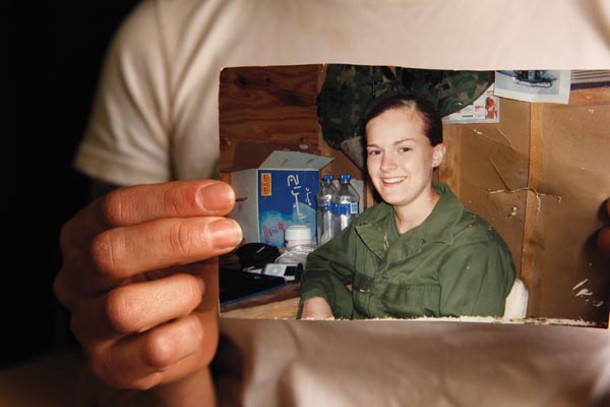 If you didn't know better, you might have thought the U.S. military opened an outpost on Grant Street last fall. And not just because of the M*A*S*H-looking mess tent.

Mellon Green was, in fact, the site of Occupy Pittsburgh, which denounced economic inequality and corporate corruption. But even radicals love a person in uniform.

Occupiers prominently displayed banners from groups like Iraq Veterans Against the War along Grant Street, along with a flag they said had been used in a military funeral. And veterans were among their supporters: "A lot of us go in young," said Joshua Heidecker, an Erie native and Marine vet, during the Oct. 15 march to establish the camp. But then "a lot of guys come out and get dealt a shitty hand of cards" when seeking a job.

Jeremy Teigen, an associate professor of political science at New Jersey's Ramapo College, says it's no surprise protesters are touting military ties. Polls suggest the military is the nation's most trusted institution, he says, so "when you go to an event like Occupy, you will find that military service is a political asset that can enhance legitimacy, no matter what the cause."

That's no news to politicians. Republican veterans outnumber Democrats 2-to-1 in Congress, but Democratic veterans of Iraq and Afghanistan are making an impact in Pennsylvania. Other vets hope to prevent future generations from marching in their footsteps.

After serving in a Missouri Army National Guard unit in 2003 and 2004, says Helen Gerhardt, one of Occupy Pittsburgh's prominent members, "My way of dealing with the trauma was to make restitution for those who'd been damaged."

Gerhardt might seem an unlikely recruit: She spent part of her childhood in communes and ashrams, and enlisted in the reserves partly because she needed "structure." When she enlisted in 2000, "I bought into the brochure claims about helping people in floods."

Joyce Wagner, too, is an unusual Marine Reservist. She enlisted in 2001 to become a mechanic because "I thought they wouldn't judge me for being female." When her Johnstown reserve unit was sent to Iraq in 2004 and 2005, she "felt the war was wrong, but I couldn't see a way out."

Such doubts may be more common than many civilians suppose.

Polling by the Pew Research Center last year found that 36 percent of post-9/11 veterans call themselves Republicans, while only 23 percent of the general public does. But female troops — whose numbers have quadrupled to 167,000 since the draft ended in 1973 — are more likely to have misgivings about the Iraq war. A 2011 Pew survey shows that nearly two-thirds of female vets "say the Iraq war was not worth fighting"; fewer than half of males agreed.

Neither Wagner nor Gerhardt fired a shot in anger, though they faced IEDs and mortar attacks. Gerhardt's unit ran supply convoys, while Wagner did tours in 2004 and 2005 working on Cobra helicopter gunships. ("I wish they didn't have missiles on them," she says, "but they're awesome.") Still, both say they witnessed mistreatment of Iraqis: civilians being needlessly threatened with weapons, bullied by reservists, or run off the road by military vehicles, for example. The incidents they made both women question who, exactly, Americans were liberating.

Both women admit doing little to stop the mistreatment. Gerhardt says that after she attempted to report a fellow soldier for wrongdoing and nothing happened, she grew numb: "the classic 'I don't want to know' response you find in authoritarian structures." Their service was also marred by private struggles. Gerhardt, who identifies as bisexual, was in a relationship with a woman. Serving in the age of "Don't Ask/Don't Tell," Gerhardt kept the relationship under wraps. "My life was a lie," she says — and that too discouraged her from speaking out. Wagner, meanwhile, says she was sexually assaulted by a fellow soldier, but did not report it. (See "Military struggles with rise in sexual-assault complaints".)

Since returning home, though, Wagner has become the national chair of Iraq Veterans Against the War, which has chapters in 48 states, though only a half-dozen members here. IVAW advocates complete withdrawal from Iraq and Afghanistan. The group also seeks to head off war by advocating "the right to heal": ensuring soldiers suffering battlefield stress are treated before  returning to the front.

Gerhardt, meanwhile, moved to Pittsburgh for a nonfiction writing program, intent on helping to tell the stories of torture victims and Iraqi refugees. She became a vocal presence in Occupy, trying to "educate people about the forces behind the military-industrial complex."

Political engagement, she says, is necessary for traumatized vets. "People aren't allowed to deal with the root causes of their depression: the consequences of what they were part of."

Patrick Murphy hasn't exactly been "Swiftboated" yet. But supporters of his campaign for state Attorney General aren't taking chances. So when a political blog reported that his Democratic rival, Kathleen Kane, had questioned whether Murphy's military service qualified him for the post, the counterattack was punishing.

Kane "has offended thousands of veterans," charged Jon Soltz, the head of VoteVets.org, during an April 3 conference call with reporters.

"The Kane campaign needs to apologize to Pennsylvania voters, and more importantly to their veterans," added AJ Gales, himself a veteran of Iraq and Afghanistan — and a Democrat running for the state House in Westmoreland County.

Kane denied that her camp had attacked Murphy's record, but it sure didn't hurt to have veterans speaking on his behalf. Murphy was awarded a Bronze Star for serving as a judge advocate with the 82nd Airborne Division in Iraq. There, he prosecuted accused terrorists and wayward soldiers, contending with enemy fire and recalcitrant Iraqi judges. In 2006, voters in the Philadelphia suburbs elected him to Congress. There, he sponsored the bill that ended Don't Ask/Don't Tell, before losing his seat in 2010.

Before Iraq, Murphy admits, "I didn't even vote in most elections." What motivated his political career, he says was "losing 19 men in our unit, and seeing how short-funded we were" — a fact he blames on clueless politicians. As late as the 1980s, roughly three-quarters of those in Congress were veterans; today it's less than one-quarter.  Many officials "don't have any skin in the game," Murphy grouses.

Other vets run for office because of what they see back home.

The son of a Marine, AJ Gales enlisted as a Marine reservist in 2004, after one year of college. He provided security to convoys in Iraq, and trained security forces in Afghanistan.

But Gales saw his own country fraying. "When I left for Iraq, my nieces and nephews had foreign-language classes in school," he says. "When I come back, all you see are cuts. I took care of my community when I was abroad, and now I want to help take care of it while I'm here."

Gales is no liberal: He's pro-life, and an NRA member. But he supports education and touts Democrats' willingness to expand veterans' benefits. His Republican rival, incumbent Tim Kreiger, is a Navy veteran himself. Still, Gales says, "I pull a lot of the cards Republicans take for granted" — like patriotism and a pro-gun agenda — "and put them back on the table."

Other candidates can raise money from professional connections — like fellow lawyers — or rely on longstanding community ties. But vets often "haven't lived in their home community for years," Soltz says. Nor can they raise funds from war buddies: "Vets don't have money."

But for vets with funding, Soltz says, "You can move voters, especially in core constituencies that Democrats have a hard time moving, like white men."

For example, VoteVets advocates federal spending on clean energy, arguing that buying oil from Middle Eastern despots finances attacks on our soldiers. "We're aligned with the environmental movement," says Soltz. "But who better to deliver that message than a veteran?"

But vets maintain their most important stand on issues is their pragmatic, non-partisan approach.  As Gales says, "You serve with guys who are very conservative and very liberal. You have to put all that aside for the mission."

Not always:  One Iraq war vet, Florida Congressman Allen West, recently made headlines by accusing progressive Democrats of being communists. Teigen, of Ramapo College, says "I'm not aware of empirical evidence" proving vets are less partisan, but adds veterans have much to offer. "I think if Mitt Romney went through the military instead of growing up in a bubble, he'd be a better candidate. Military experience is a boon in many walks of life."

Not to Helen Gerhardt. Being a veteran might give her some additional "rhetorical power." But that's a symptom of the militarism she opposes.

"I want to explode that romantic halo," she says.

View this story on the Pittsburgh City Paper site.