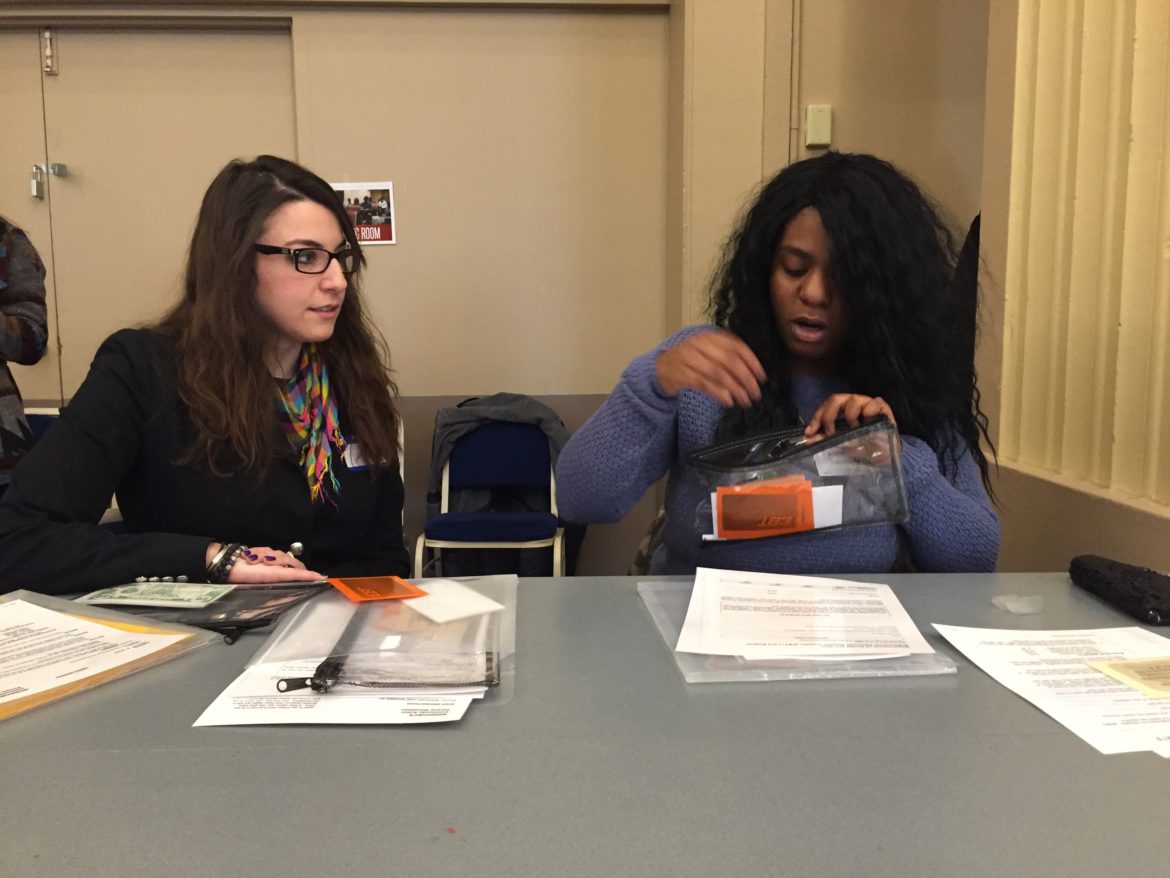 In a role-playing scenario, Megan Fahey visits with a social worker to go through the motions of applying for public assistance as part of a poverty simulation at Point Park University. (Photo by Mary Niederberger/PublicSource)

The disastrous decision that Megan Fahey made as she was trying to care for her fictional family after being abandoned in poverty by her husband was to spend her last $10 on food rather than bus passes.

Melina Izzy faced a similar problem in her role-play scenario. Living in a homeless shelter with her assigned partner, Loretta Siracusa, and a 1-year-old child, she needed to choose between using a transit pass to grocery shop or to visit a social service agency to apply for benefits. Groceries won out. Hunger was an immediate problem.

Welcome to the world of poverty’s difficult decisions.

The dilemmas faced by Fahey’s and Izzy’s families are real, though their participation was part of a poverty simulation held Friday at Point Park University and sponsored by its department of community engagement. The scenarios were drawn from real-life caseloads of social service workers, said Tammy Thompson, a consultant and simulation facilitator.

Fahey, coordinator for Point Park’s Center for Inclusive Excellence, is not really a single mother and does not live in poverty. Her children were played in the scenario by Point Park students Christopher Ciucanu and Emily Valentinetti, two 19-year-olds who have never experienced poverty.

Likewise, neither Izzy, a Point Park student, or Siracusa, an employee of the Allegheny Intermediate Unit, live in poverty. 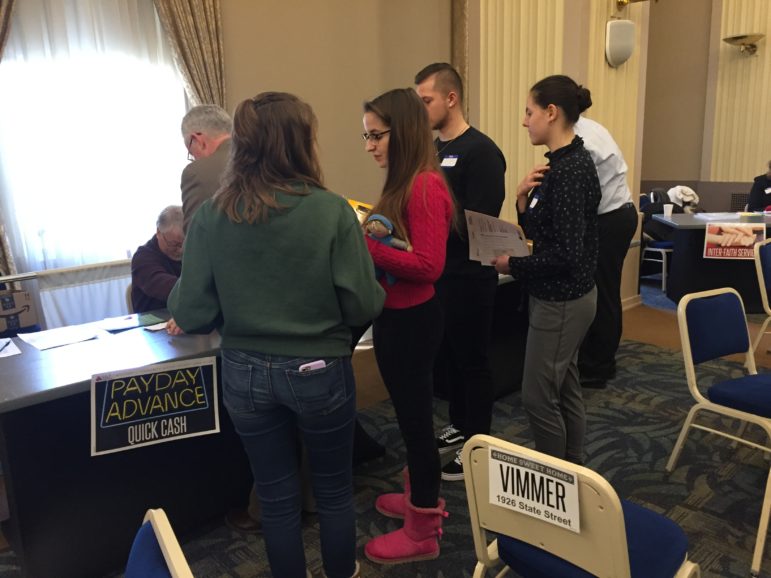 Participants in the Point Park University's poverty simulation line up at makeshift pawn shop to sell their family's belongings. (Photo by Mary Niederberger/PublicSource)

They were among several dozen individuals who showed up to role-play family scenarios passed out by the event’s organizers, the East Liberty group of Circles of Greater Pittsburgh.

“This is not a game,” Thompson said. But rather, she explained, an earnest attempt to understand the many challenges faced by people in poverty.

Thompson, who grew up in poverty, said she got involved with the simulations because “I realized that people have false assumptions about poverty and how to get out of it.”

In her role-playing scenario, Fahey’s decision to not buy transportation passes left her unable to revisit social services to see why her application for public assistance hadn’t gone through or to look for a job. It also prevented her 17-year-old son from getting to his newly acquired job in a cafeteria.

“We are done,” Fahey said, sitting defeated between her ‘children’ as she waited to be evicted from their $300-a-month apartment.

For Izzy and Siracusa, the pair found they couldn’t cash Siracusa’s paycheck because they had no transit pass to get to the bank. Siracusa set out to buy more transit passes, which paradoxically required a transit pass.

Most participants in the simulation were assigned to family units but some moved through as individuals. There were tables set up to represent the agencies and businesses that people in poverty interact with, including a social service agency, food store, pawn shop and check-cashing center. 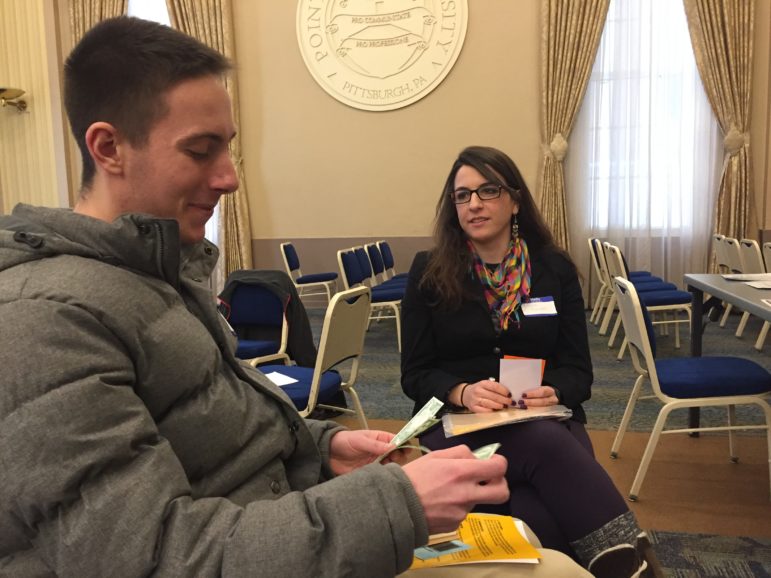 Point Park University student Christopher Ciucanu counts the money he received from a pawn shop for selling his fictional family's belongings. It was still not enough to cover their $300 assigned rent. (Photo by Mary Niederberger/PublicSource)

Each family or individual was assigned a scenario and a limited amount of resources, which included some cash, transportation passes and household items. They had to make decisions on how best to use the resources.

Thompson stopped the simulation every 10 minutes to see how participants were coping. Each 10 minutes represented a week in their fictional lives. She warned that the middle-to-the-end of the month is when families in poverty become vulnerable as money and other resources run short.

Three of the fictional families were evicted from their homes by the third week of the simulation.

It was also about that time that some family members considered stealing items from others in order to get by.

In Fahey’s family scenario, Ciucanu was a high school dropout with a pregnant girlfriend and he was dabbling in the drug trade. As the role-play exercise began, Ciucanu initially tried to get a job to help with the family’s bills. When the transportation issues prevented him from getting to work, he considered stealing transportation passes from other people’s homes.

Later, he sold most of the family’s possessions at a pawn shop but still didn’t get enough to cover the $300 rent. “If I really were this person, I think I would need to really work in my drug dealing,” he said.

Izzy also made the decision to sell her family’s possessions, getting just 30 to 40 percent of their value. She used it to buy transportation passes but lost some of her money because she didn’t have correct change. 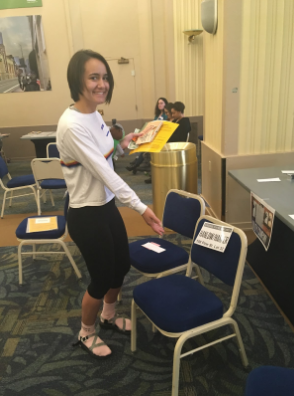 She still needed to buy groceries and find housing, a job and child care. She reflected on her progress: “It’s not going good.”

Eventually the couple decided to use Siracusa’s paycheck to rent an apartment for $235 a week. But that left little money for food or any medical care they may need.

Fahey said she was shocked at how just one wrong decision threw her fictional family into a downward spiral.

“It was a big error to buy food instead of transportation passes,” she said. “One mistake devastated our family.”

PublicSource intern Jordana Rosenfeld can be reached at jordana@publicsource.org.