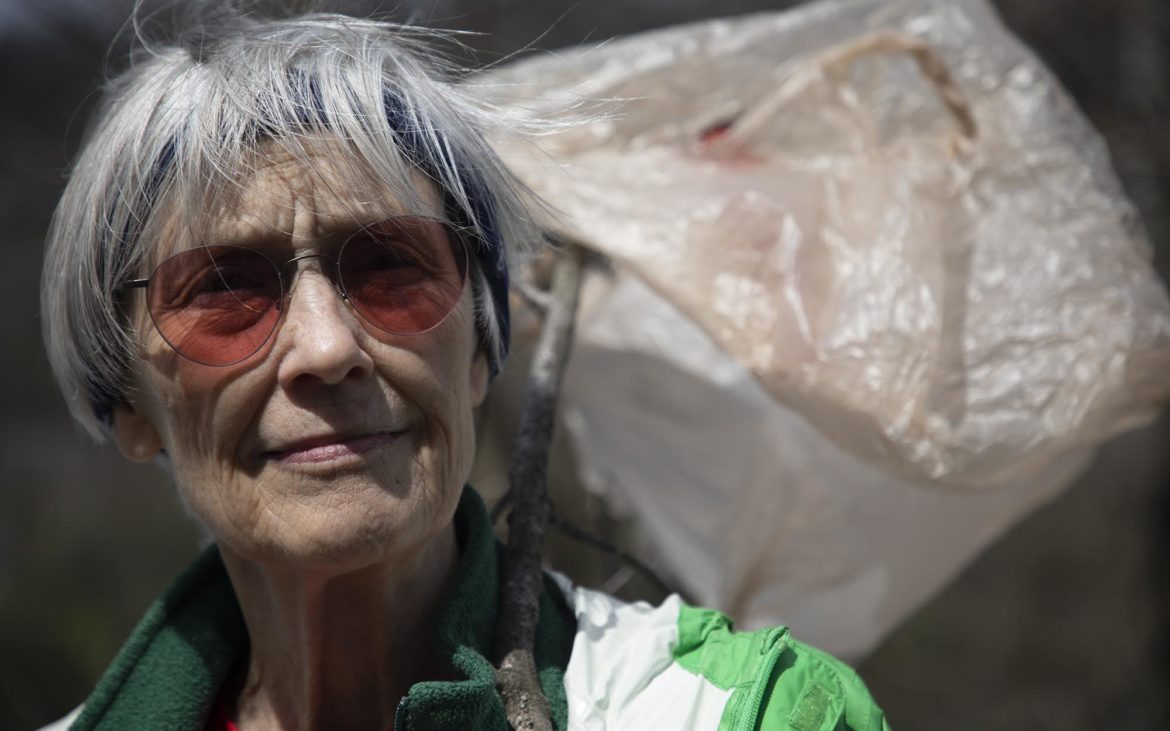 Ann Bristow protested outside the Marcellus and Manufacturing Development Conference in Morgantown on April 9, 2019. Bristow held a branch wrapped in plastic bags to represent pollution from the petrochemical industry. (Photo by Kat Procyk/PublicSource)

Attendees at an industry conference in West Virginia on Tuesday cheered projections for increased petrochemical production in the next 40 years, while protesters outside held up withered single-use plastic bags to show the environmental harm of petroleum products.

Both groups, however, shared a common view that the economic hype and resulting environmental impact predicted for the region may not pan out. It's how they feel about the prospect that diverges.

The Ohio River Valley region is projected to be on the brink of a petrochemical boom adding to its already booming natural gas industry: Production of ethane, which is used to make plastics, is expected to quadruple by 2025, according to a presentation by Brian Anderson, the director of the National Energy Technology Center at the U.S. Department of Energy.

Several top industry executives and analysts at the Marcellus and Manufacturing Development Conference in Morgantown spoke about the rare opportunity to create 100,000 jobs, an industry estimate, and bring billions of dollars in economic growth to the region, which includes Pennsylvania, West Virginia and Ohio.

“This is the chance of a lifetime to create a generational change for the region,” said Michael Graney, executive director of the West Virginia Development Office.

But the mood at the conference was not always celebratory. Several speakers focused on the urgent need to continue to sell the Appalachian region’s potential to the rest of the world.

Wally Kandel, the director of Shale Crescent USA, a nonprofit dedicated to promoting business growth through natural gas development in the Ohio River Valley, said the region is still trying to secure four more cracker plants in addition to Shell’s plant in Beaver County. Conference speakers reiterated that increased shale gas production could lead to a set of smaller, downstream facilities in the region.

According to Kandel, many of the companies large enough to invest the billions required to build a cracker plant still see Texas and Louisiana as the country’s primary location for billion-dollar petrochemical investments.

“The biggest obstacle is we have to educate people at the tops of the company,” he said.

Outside the conference hotel, protesters spoke out against industry growth they believe would create increasingly toxic, dirty and unlivable communities that would blight the region. 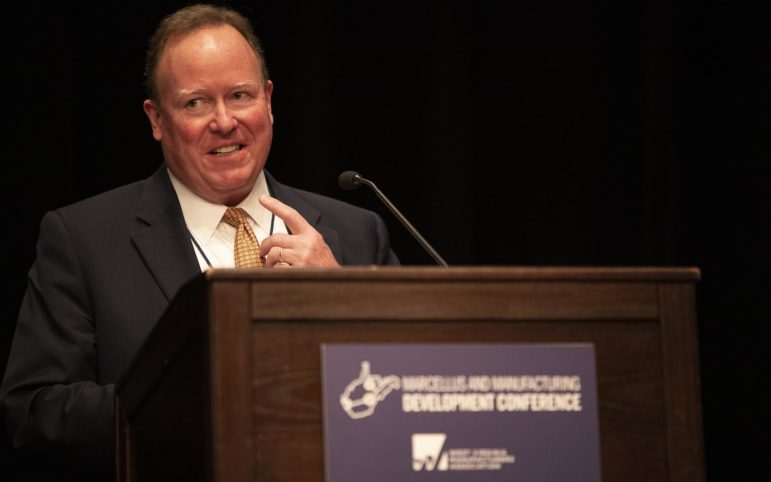 Mike Graney, executive director of the West Virginia Development Office, speaks at the Marcellus and Manufacturing Development Conference in Morgantown on April 9, 2019. (Photo by Kat Procyk/PublicSource)

“Inside the Marriott are people who are thinking only about the money and the profits and not giving one minute to what is going to happen to our air and water,” said BJ McManama, a protester and member of the Indigenous Environmental Network.

At the conference, Greg Kozera, the director of marketing at Shale Crescent USA, billed the region as a prime location for the industry. He said 70% of the factories in the United States that buy plastic materials are within a day’s drive.

Right now, Kandel said he’s been trying to promote the region to top energy executives. “…‘Appalachia’ and ‘Rust Belt’ have negative connotations.” He told the attendees to “please starting using the terminology ‘shale crescent’ instead.”

Frank Bakker, the CEO of US Methanol, said he has already begun to move two methanol production plants from Brazil and Slovenia into the Ohio River Valley. Methanol is a chemical made from natural gas.

The cost of natural gas has decreased over the last five years, Bakker said, while the demand for methanol has increased. So the company decided to move to Appalachia. They literally packed up and shipped their entire plant from Brazil to its new location near Charleston, West Virginia. Now, they’re putting it together “like IKEA.”

The plant is nearly halfway done, and the company is still deciding on a new location for its Slovenian plant. Each methanol plant creates about 50 permanent jobs and 200 construction jobs, Bakker said. In trying to draw the second plant to West Virginia, Graney mentioned the state’s lack of a business franchise tax and its right-to-work law that limits the abilities of unions to collect dues.

Protesters outside promised to continue to oppose the petrochemical buildout, despite the ongoing $6 billion construction of a cracker facility in Beaver County. They said they plan to protest a possible second cracker plant, which received permit approval to be built in Belmont County, Ohio.

“We can stop this,” said Dustin White, a project coordinator for the Ohio Valley Environmental Coalition. “This is not a done deal.”

Ashley Funk, a community organizer with Mountain Watershed Association, is concerned about negative health impacts. She questioned whether a potential cancer cluster in Washington County is a consequence of fracking in the region. The Pennsylvania Department of Health is currently investigating whether the area has a cluster and looking at possible environmental causes. 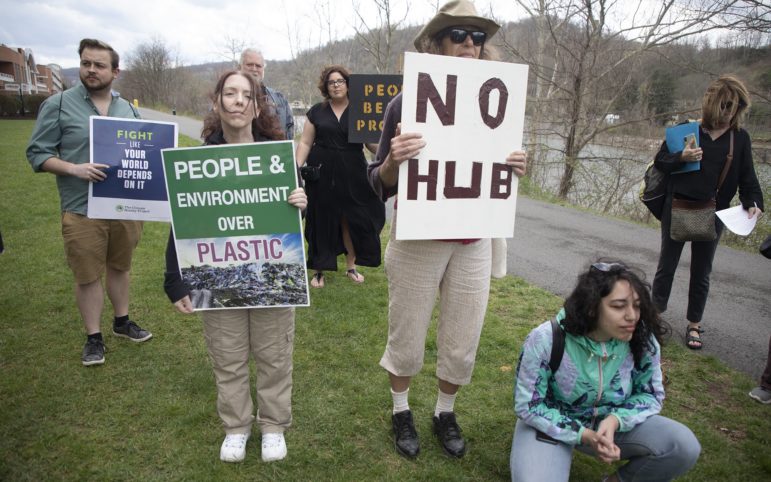 Protestors outside the Marcellus and Manufacturing Development Conference in Morgantown on April 9, 2019. (Photo by Kat Procyk/PublicSource)

One of the biggest environmental issues of the day — climate change — came up over and over again at the conference, but industry leaders largely avoided the term, instead talking about carbon capture technologies that they hope would allow them to continue to burn fuel without carbon emissions.

Steve Winberg, the secretary of fossil energy at the United States Department of Energy [DOE], praised President Donald Trump’s support of fossil fuels. But he also said the industry has to prepare for a future of “zero carbon emissions.”

“I don’t know where we are going with respect to regulation or legislation with respect to climate change,” Winberg said. “But the federal government and DOE needs to look out beyond the horizon to work on these technologies that could be used to reduce greenhouse gas emissions.”

Winberg mentioned the DOE’s investments in coal plants that the department hopes will generate zero emissions after the carbon burned is captured. Winberg said the DOE supports giving money to private companies that can remove excess carbon dioxide from the air.

“So then once we go there, then there is no reason you can’t continue to use fossil energy along with coal and wind and hydro and nuclear,” he said. 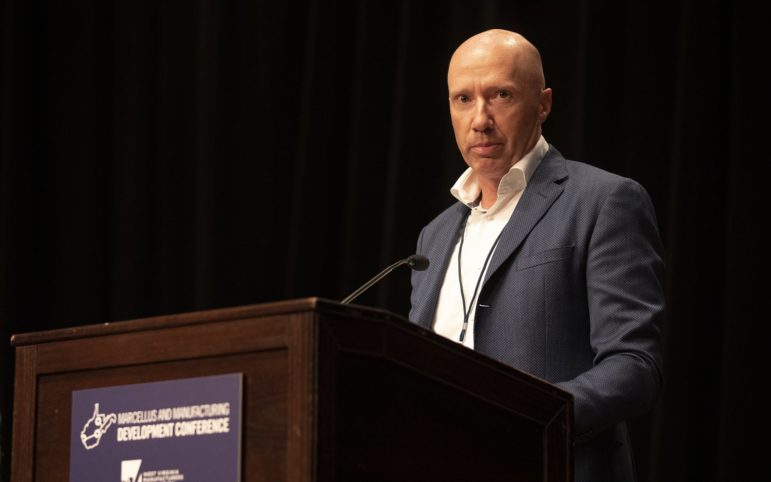 Frank Bakker, CEO Of US Methanol, is in the process of relocating two methanol production plants to the Ohio River Valley. (Photo by Kat Procyk/PublicSource)

But despite these goals, several presenters projected a future where fossil fuels and some of the most promising technologies to fight climate change are in tension. Kathryn Dyl, the lead modeler for natural gas at the US Energy Information Administration, said their projections show that the competition for new electricity generation in the country “will increasingly be natural gas versus renewables.”

In one model Dyl displayed, renewable energy sources become the dominant engine for electricity growth in the country by 2050. But if the supply of natural gas continues to increase and prices remain low, she said “natural gas tends to win out and rise at the expense of renewables.”

The natural gas boom in the region is not only about energy now. It’s also about plastics and chemical production. And what happens to those materials down the line. Bev Reed, a protester from Belmont County in Ohio, is concerned about the harm caused by plastics after they’re thrown away.

“The plastic patch in the Pacific Ocean is 1 million square miles in size,” she said, “and they want to make more?”