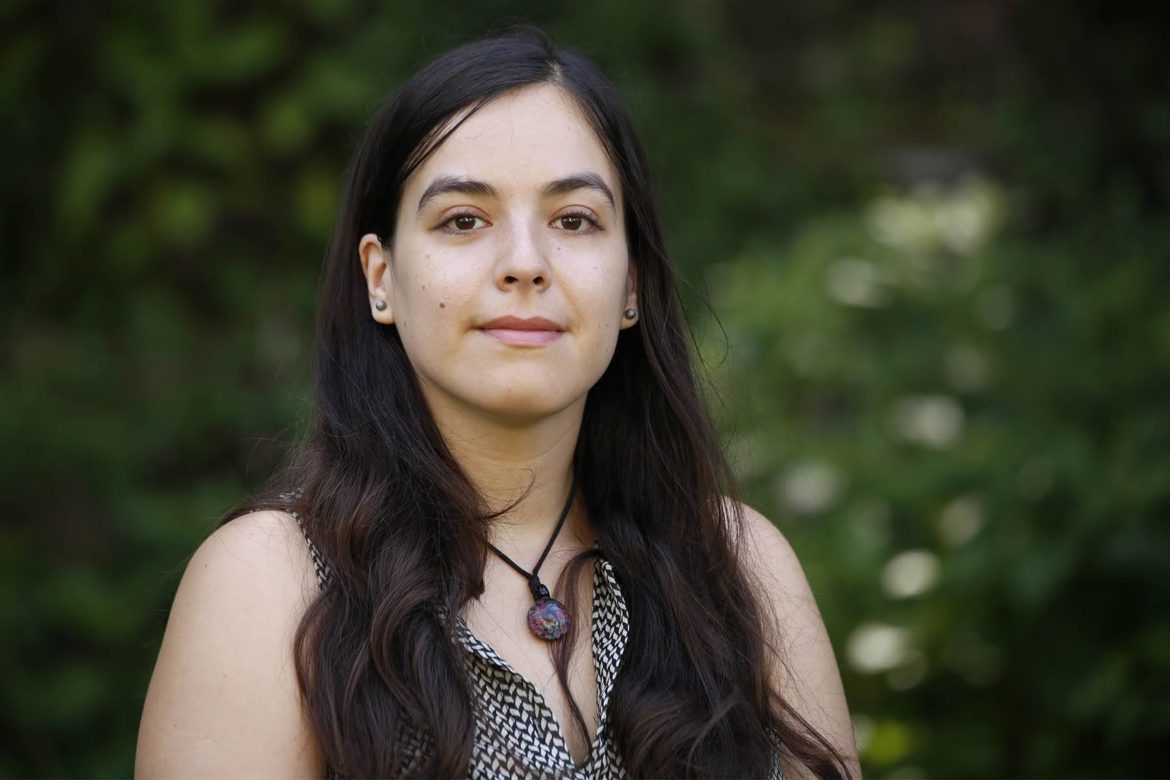 Marina Lopez Gonzalez Duran photographed at her home in Pittsburgh's North Side. (Photo by Ryan Loew/PublicSource)

A couple of weeks ago all international students living in the United States learned that they would soon be required to leave the country. A rapid-fire succession of lawsuits and public outrage forced the Trump administration to back off from the order targeting international students whose universities moved classes online due to coronavirus concerns. It was a close call. For days, the fates of more than a million lawful residents of this country hung in complete uncertainty, disrupting their lives and the pursuit of their dreams.

I was on an F1 student visa for seven years. A year and a half ago, I would have been one of those students. This whole affair reminded me of life as an international student; of how difficult it is to get and keep a student visa, how many rules you have to follow, of constant uncertainty and stress.

My mom, dad, sister and I moved to Pittsburgh in the summer 2011. As I boarded the airplane leaving my native Mexico City, all my earthly possessions reduced to two suitcases and a carry-on, I thought enthusiastically about the U.S. as land of opportunities. I hoped to become a great musician. I’d work hard, master my craft, and all the sacrifices made would end up being justified.

My dad was following a professional dream as well. He had been offered a job at the UPMC Children’s Hospital new telemedicine center. He was leaving a country in need that he greatly loved because, paradoxically, he could help more people virtually, from far away.

This was also an escape. The low rumble of dread had been steadily growing since 2006, when the U.S.-backed war on drugs exploded all around Mexico. I remember hearing about heads on spikes and bodies found hanging from bridges, first, in shock. Later, as acts of unspeakable violence became more and more commonplace, they became part of the static of everyday life.

The economic crisis of 2008 only made things worse. So that, by the time we left Mexico City, in spite of leaving friends and family, our holidays, our food, our roots behind, we felt as though we might just be headed for a better life.

Already in the U.S., we learned that, since I was almost 20 years old, I wouldn’t be able to remain as a dependent on my father’s O1 ‘extraordinary person’ immigration status. If I wanted to stay here, with my family, pursuing my dream, I would have to be enrolled in an American university before I turned 21.

So I fought. I emailed the head of Duquesne University’s piano department, Kenneth Burky, who luckily turned out to be a kind soul who guided me through the application process.

I knocked on door after door, trying to get a scholarship, since my parents wouldn't be able to afford a full tuition. I was not legally allowed to get a loan. I remember my mom trying to hold back tears as we talked to university secretary after secretary, hoping some sort of deal would come through.

When I finally started at Duquesne in spring 2012, the culture shock was instantaneous. My classmates came from similar backgrounds to one another, lived together in dorms and had gotten to know each other over the fall semester. Slowly, I found my footing, got involved in music composition, found a tutor and mentor in retired Duquesne professor David Stock.

I graduated in three and a half years. Then the uncertainty started all over again. I applied to grad schools. At every step the question emerged: “Should I keep pursuing my dreams, knowing it will make it unlikely for me to find the stability required of immigrants to keep their status?”

By that point, the stunting effect of being on an F1 Visa had begun to take its toll. I wasn’t allowed to legally work outside of the university. My university job couldn’t consist of more than 20 hours a week. I saw my friends grow, get their own apartments, careers, travel.

The life of an immigrant is an endless pile of paperwork, a long list of terms you memorize, that define you, to aspire to, to fear: O1, H1, I94, F1, J1, OPT, I20… A failed class, a misdemeanor, a clerical error can cost you your status.

I was accepted at Carnegie Mellon University’s master of music composition program. My plan was to get a Ph.D. and apply for a university job. A longshot, but a way of keeping my status.

Then the 2016 election happened. I woke up to the ugliest side of the American underbelly; watched the man who called people like me ‘rapists’ and ‘criminals’ in the opening remarks of his presidential campaign become president. And after he won, I heard of people who speak my language, who come from my culture, whom I’ve met, being raided at 6 in the morning, after a lifetime of peaceful, law-abiding existence in this city.

Now it was 2017, time to start the process all over again, to prepare for the GRE, take the TOEFL language exam for the umpteenth time, write essays, send portfolios, fill out applications. I was working a part-time university job and held two assistantships to pay for my tuition.

And I hit a wall. It was November 2017 when I decided I wasn’t going to move forward. I was burnt out. I had a very difficult conversation with my parents. At first, they were in shock, fearing that I wouldn’t be able to get a tourist visa to re-enter the US and come visit them. Then, they came to a reluctant acceptance of my choice. 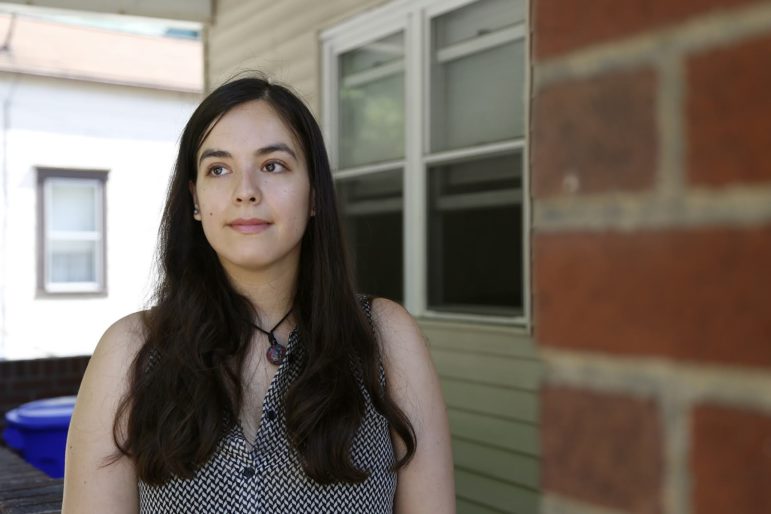 Marina Lopez Gonzalez Duran lived on an F1 student visa for seven years, a status that would have forced international students to leave the United States this fall before a plan from the Trump administration was scrapped. (Photo by Ryan Loew/PublicSource)

In January 2018, I went into a deep depression. Everything I’d fought and hoped for was gone. The country I thought was the key to my dreams had turned out to be a harsh, unforgiving, hateful place.

And then, in what I thought was my last semester in the U.S., I met the man who was to become my husband. I fell in love and I found the will to keep fighting. Will and I got married in the Spring of 2019, and last November I finally obtained my green card.

What really gets to me about the current situation is that if I somehow had been stronger and had found it within me to go through with doctoral applications, it would be me who’d be targeted by the deportation order now rescinded. After almost a decade of being in this country, of being careful about what I say online, of being in my best behavior, of keeping my grades up, it would have been me.

My story is in no way special or unique. There are many other people like me, who come here to pursue their dreams. Our stories are complex and diverse. We are not a monolith, but we are a net good for this nation.

There is a false narrative of division between different types of immigrants, claiming that somehow people who had the resources and opportunities to apply ‘the right way’ are better than those who were desperate enough to risk it all and come here in spite of threats of violence and deportation.

Recent events have proven that we are not so different in the eyes of those who wish us gone from this land; it isn’t about how you got here, it’s about who you are.

First, people from certain countries were barred from entering the U.S. Then, the most vulnerable, undocumented inmigrants and refugees were targeted. Then, there was the legal challenge to DACA. A few weeks ago, the White House announced it would be suspending work visas for a number of highly skilled people in the STEM fields. And now, its international students. Some of these attacks will be successful, and some won't, but their insistent onslaught proves my point.

This is scapegoating, plain and simple. It's a lack of imagination to not be able to see the net good that all this diverse talent from all over the globe brings into this country, and how we can coexist with and aid the advancement of American born citizens.

And it is a shame; it is this country expunging what makes it unique, strong, and beautiful.

Marina Lopez Gonzalez Duran is a musical composer and budding writer based in Pittsburgh, she can be reached at marinalopezcomposer.com.