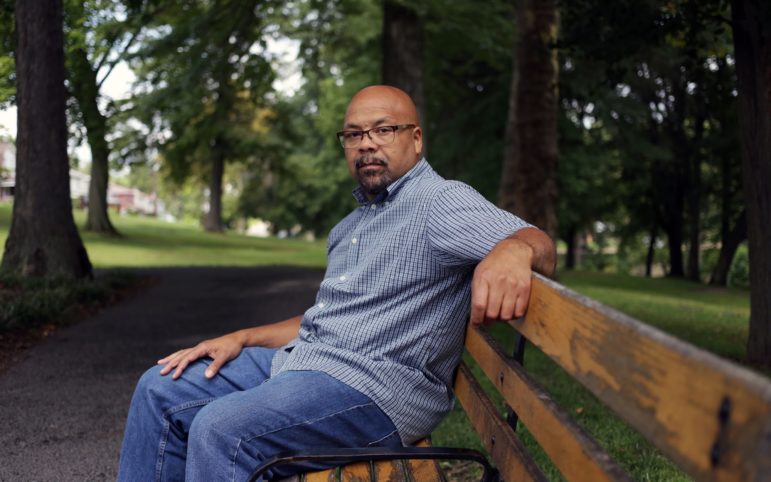 Dr. Jamil Bey is the president of UrbanKind Institute. (Photo by Ryan Loew/PublicSource)

What does it mean to be invisible?

Ralph Ellison in his novel "Invisible Man" describes the concept in these words: “I am invisible, understand, simply because people refuse to see me.” Ellison uses the metaphor of invisibility to describe the relationship that Black Americans have with white Americans. Through their social conditioning, whites are unable to see Blacks as actual beings.

Earlier this month, many Pittsburgh residents were talking about a map Carnegie Mellon University (CMU) published of the campus and surrounding area. On the map, all predominantly Black neighborhoods were made invisible. They were not labeled. There were no outlines showing borders. It’s a sign to mean that these invisible neighborhoods are not spaces or places worth living, visiting or even mentioning. Still, as egregious as CMU’s map faux pas was, it is not outstanding in the context of this city.

CMU’s complicity in the underdevelopment of the missing neighborhoods results from the fact that they are a large employer with resources and investment potential to be a positive agent of change, but they do not seem committed to neighborhood investment. Some of their success is predicated on their ability to source cheap labor from nearby communities. Many of the folks employed on CMU’s campus who live in the missing neighborhoods serve in critical yet undervalued jobs on CMU’s campus, including as security guards, on landscaping crews, as kitchen workers or as janitors.

The continuing injustice and inequity are not sustainable. They already stifle the region’s growth.

CMU, however, is not the sole beneficiary nor are they the primary driver of maintaining a system that benefits from a permanent underclass. In addition to CMU, the other universities, the region’s museums, financial institutions, large corporations, philanthropy, municipalities and state government can all be implicated in employing policies and actions that have contributed to the decline, decay and virtual invisibility of the neighborhoods not labeled on CMU’s map. The current conditions in these neighborhoods are the result of decades of disinvestment, exploitation, underdevelopment and neglect.

So, let us not waste much more time on the map. Not to dismiss or take it lightly – let’s just not make that the focus of our indignation. Nor should we seek to make CMU the scapegoat for the systemic failure of public and private institutions that have not provided equity and justice for all residents.

It did not start with CMU’s map. The infrastructure in the “invisible neighborhoods” is crumbling not just because of CMU. The city and the county have not adequately invested there either.

The housing stock is devalued not just because of CMU. The region’s financial institutions have discriminated in their lending practices and prevented residents from owning homes and investing in their communities.

The poor air and water quality in these neighborhoods cannot be directly attributed to CMU. County actions, state laws and federal regulations do not adequately protect residents from polluters.

Make the necessary changes to break from the practices, policies and programs that created the injustices...

The point here is tremendous disparity exists in the city of Pittsburgh and in the region, and it is the result of policies and practices by a range of institutions that have undervalued and impacted these neighborhoods for a long time.

The continuing injustice and inequity are not sustainable. They already stifle the region’s growth. The number of Black residents in the city continues to decline at a higher rate than the rate of new residents that the city attracts.

The challenge to institutions and leaders like CMU, Pitt, PNC Bank, UPMC, the mayor, the county executive, city council, the school district and everyone else who cares about our region is to rethink your current theories of change and scale tools to address the size of the problem. Make the necessary changes to break from the practices, policies and programs that created the injustices, inequities and that continue to damage our living environments. Adopt models that cut across generations, jurisdictions, sectors and disciplines to solve the problems that we face as a city and county.

If we, as a city, are serious about improving the lives of our region’s residents and making Pittsburgh a place where all families can thrive, we would take a more comprehensive look at how the challenges in the invisible neighborhoods intersect and compound to affect the quality of life for residents. This requires us to de-silo our approach to problem-solving. We need to be more strategically collaborative in our efforts. And we need to trust the expertise and analysis of  residents to help solve the complicated mix of challenges impacting them.

We invite you to join us as the UrbanKind Institute spearheads a coalition to expand the All In Pittsburgh initiative to incorporate goals and priorities to create a regional Just, Equitable and Sustainable platform built on the following pillars:

Pay attention for more information on opportunities to get involved. We invite you to join us. Hopefully,  you are willing to roll up your sleeves and put in the necessary work to make our city an equitable, just and sustainable Pittsburgh for all.

Dr. Jamil Bey is the president of UrbanKind Institute, a Pittsburgh-based think-and-do-tank committed to advancing policies, practices, and programs that are kind to urban people and environments. He can be reached at Jamil@urbankind.org.