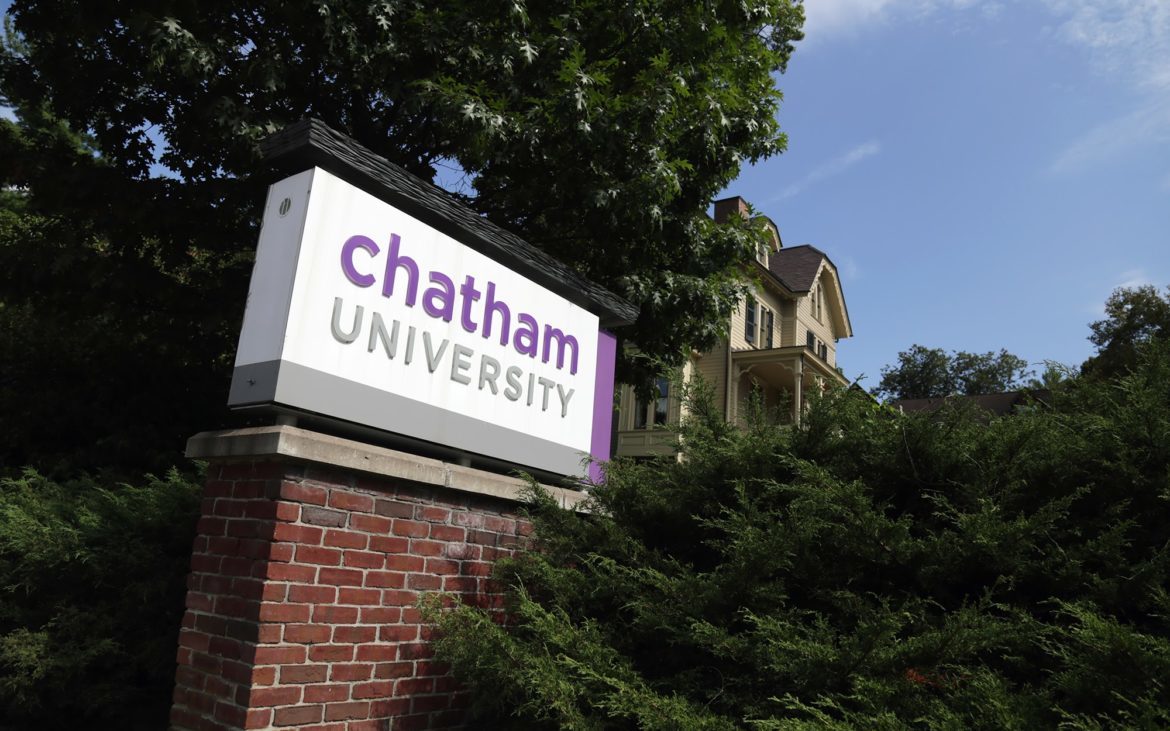 A view of Chatham University's campus from Fifth Avenue in Oakland. (Photo by Ryan Loew/PublicSource)

Chatham University has altered its honor code for the first time in nearly a decade to remove a zero-tolerance policy for self-harm and suicidal behavior on campus, according to an email sent to the student body on Wednesday morning.

The honor code is the institution's guiding document on community standards, and the policy on self-injury that triggered discipline in some cases is at least a decade old.

Following a PublicSource report where three young women shared their stories of experiencing a mental health crisis while at Chatham, the university created a task force in early September to review the school’s honor code. The code said students could be removed from campus housing or expelled for self-injury, expressing suicidal thoughts or threats and attempts of suicide. After the publication of the initial article, many students and alumni shared their own stories and reactions to the policy online, contacted PublicSource to detail their experiences and even created an online petition calling for a repeal of the controversial policy. Students also raised concerns to PublicSource that the university’s counseling services were inadequate.

University spokesman Bill Campbell said the institution was unaware that students had these experiences prior to the PublicSource story.

“It shined a light on something that could be made better,” he said.

The university’s mental health task force is comprised of two university professors, the directors of counseling services and disability services, and Vice President of Student Affairs & Dean of Students Zauyah Waite. The group, according to the Wednesday email message, determined there was “room for improvement in regard to the language around mental health and self-harm in the Chatham Honor Code.”

The task force, which met weekly for more than two months, recommended the university remove self-harm behavior from the zero tolerance for violence section of the school’s honor code. The university approved the change and added a health and wellness section to the honor code.

“The idea around the changes was related to the way the previous honor code was written and the confusion, potentially, in terms of who to reach out to and potentially what the response could be,” said task force member Sharon Novalis, assistant professor of occupational therapy. “We really tried to make revisions that would reflect that there’s support available.”

The new section includes language indicating that in cases where there is an imminent risk to the health or safety of a student, “further response, as determined by the university on a case-by-case basis, may be required.”

“While there are many positive things being done in this area, our task force has also determined that there is room for improvement in regard to the language around mental health and self-harm in the Chatham Honor Code.”

A self-harm protocol form once used by the university also will no longer be used, Campbell said. This form outlined what staff and students should do if they learned of a student self-injuring or talking about suicide. The form said the student should be reported to the Student Affairs office, which would determine the next steps for the student. The next steps could have included referrals to counseling as well as convening a Student Behavioral Review Committee or having the student sign a ‘behavioral contract.’

Both Novalis and task force member Deanna Hamilton, associate professor of graduate psychology, said students who self-harm or have suicidal thoughts will not be in jeopardy of being removed from campus housing or punished by the school.

If a student is found to be harming themselves or having suicidal thoughts, they likely would be referred to the school’s counseling services. Each case will be handled on an individual basis. Campbell declined to say who would make the decision as to what would happen to the student, adding he would not comment on hypotheticals.

The task force recommended a student support team be developed to work with students who are struggling. However, that team has yet to be created.

There is still work to be done, school leaders said.

“It shined a light on something that could be made better."

That includes improving communication with students to ensure they are aware of services offered to those suffering from mental illness, Novalis said. Task force members, however, did not have specifics as to how that will occur.

The university also removed a paragraph in the honor code’s Conduct Standing section that referred to mental or bodily harm to self as behavior that could trigger a conduct review.

However, the university can launch a conduct review for a student who “intentionally inflict[s] mental or bodily harm upon any person.’ That does not include self-harm, Campbell said.

Over the last two months, the task force reviewed school policies and procedures and spoke with students, faculty and staff and outside professionals with expertise in the area. They also reviewed policies from between 10 and 15 other school to get ideas, yet focused on making changes on “what would be best suited” for Chatham, Novalis said.

Hamilton said that the students and alumni they spoke with indicated that the way the honor code was written in the past did not reflect their experiences at the school. However, Hamilton added, they did raise concerns that the honor code lacked clarity related to the university’s services.

University President Dr. David Finegold, who was officially inaugurated by Chatham University on Oct. 13, commissioned the mental health task force in early September, the day after the first PublicSource article ran. Finegold is currently out of the country, Campbell said.

Waite and Elsa Arce, director of student counseling services at Chatham, were not made available for interviews.

The updated honor code can be found here.