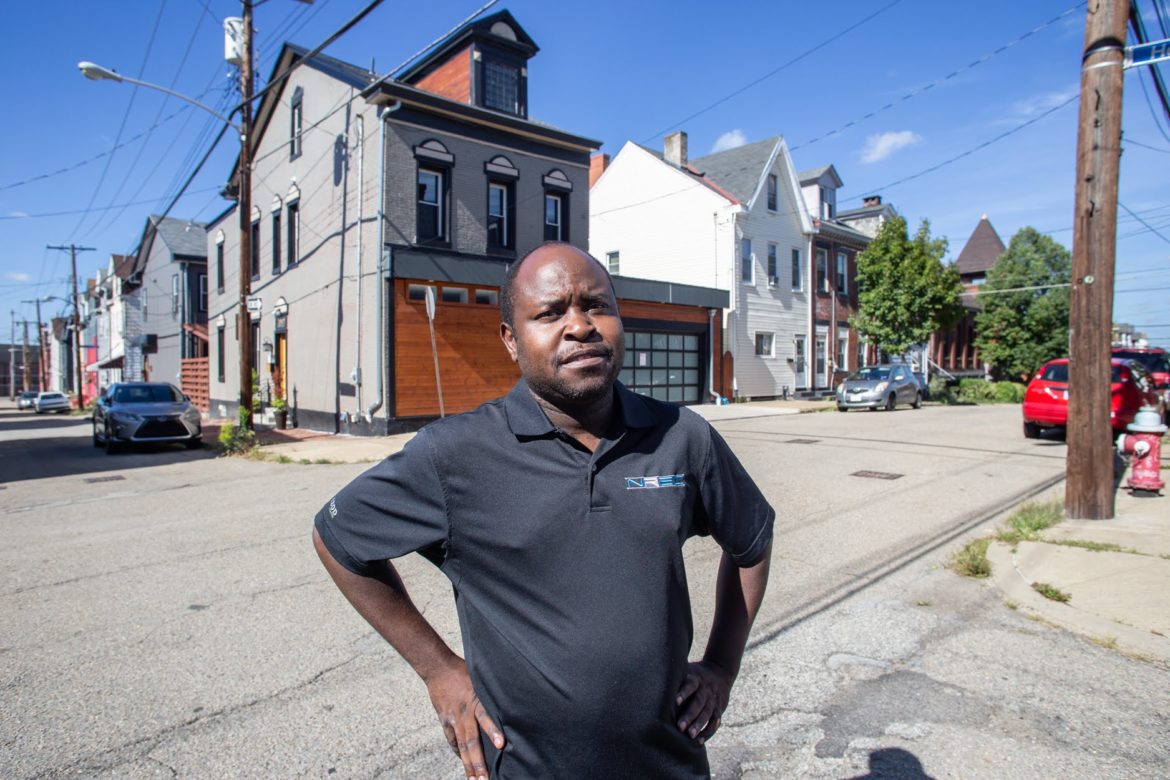 Omar Muya revisits his former home in Lawrenceville. He and his family had to move when the building owner sold to a redeveloper. When his family bought a house, they found an affordable one outside of the city. (Photo by John Altdorfer/PublicSource)

At the Lawrenceville Farmers’ Market in Arsenal Park, Omar Muya lit Sterno cans to heat the samosas he sells there every other Saturday afternoon throughout the summer.

Muya, 34, came to the United States from his native Somalia in 2004. He moved with his family to a house three blocks from the park. “My friends and cousins, we all played soccer in this park,” he said.

When Muya’s family was ready to buy a house, he found an affordable one with a yard outside of the city. He commutes to Lawrenceville each day to his job as an electrician at the National Robotics Engineering Center. Most of the roughly 300 Somali Bantu refugees that called Lawrenceville home a decade ago haven’t been as fortunate.

It is believed that all are now gone from Lawrenceville, exiled to other neighborhoods in large part by burdensome housing costs. Many of them return weekly for English and citizenship classes and to visit UPMC St. Margaret Family Health Center. For nine months out of the year, Somali Bantu children return to attend Lawrenceville schools.

“But they can’t live here, and you see how tragic that can be when they have to go through the reintegration process all over in a new neighborhood,” said Dave Breingan, executive director of Lawrenceville United [LU], a neighborhood advocacy group.

Breingan hopes that a housing policy tool called inclusionary zoning (IZ) may give remaining low- and moderate-income families a better chance at staying in the neighborhood. The goal of IZ is to ensure that affordable units are created as part of market-rate developments.

To that end, LU recently launched a process called Housing for All to prepare for an IZ pilot project in Lawrenceville. In partnership with the Lawrenceville Corporation and Councilwoman Deb Gross, and with technical support from the city’s planning department, a successful pilot in Lawrenceville could be expanded to other parts of the city within two to three years.

In a 2012 report titled, "Is Inclusionary Zoning Inclusionary?" the RAND Corporation, a nonprofit think tank, concluded it is. "While IZ programs serve relatively more-advantaged families than other affordable housing programs generally do,” the report authors wrote, “the degree of access IZ provides to low-poverty places is still remarkable." Specifically, RAND determined that on the whole, IZ households were "assigned to lower-poverty schools" that "performed slightly above average."

Two Lawrenceville public schools, Arsenal PreK-5 and Pittsburgh Arsenal 6-8, offer underserved students opportunities not available in many lower-income neighborhoods. The schools have English as a Second Language [ESL] programs that serve about 30 percent of students. This past school year, the 78 Arsenal students promoted to ninth grade represented 17 countries and spoke 22 languages.

The Somali Bantu children that once walked to Arsenal schools each day now bus in from other neighborhoods — about 150 from Northview Heights, according to Patti Camper, principal of Arsenal 6-8.

Arsenal’s ESL population has plateaued in recent years, while South Hills Middle School, another school with an ESL program in a more affordable part of the city, has increased dramatically during the same timeframe, Camper said.

“Are we really providing opportunities for families to live here — for people to really grow roots in the neighborhood?”

Juma Mkomwa is a Somali native with six children, three of whom ride a school bus 5 miles to Arsenal from Northview Heights. Mkomwa has two other children eligible for preschool, but he said he can’t drive them because his shift at a candy factory starts at 3 p.m. “I can take them in the morning but can’t pick them up. If I’m late for work, I might get fired.”

Camper also said that because of long bus rides, many students can't participate in after-school programs.

This affects not only immigrant households, but all families earning lower incomes, Camper said.

“It’s a very different world for many of our families,” she said. “They don't work, they don't get paid. …Part of why PreK is predominantly white is because the people who work [multiple] jobs are predominantly black or brown.”

The disparities are further reflected in the rental housing and homeownership market. According to analysis by the Pittsburgh Post-Gazette, Lawrenceville lost 120 (about half) of its units that accepted Housing Choice Vouchers, commonly known as Section 8, between 2011 and 2016. Breingan said the number of owner-occupants who lived in their homes for 35 years or more declined by 31 percent between 2014 and 2017.

More than a thousand people live in the low-rise public housing buildings of Northview Heights, isolated atop a hill and encircled by trees. At the entrance is a security gate and a guard who asks guests for their driver's license, the make and model of their vehicle and reason for visiting.

Mkomwa lives with his wife and children in a four-bedroom apartment decorated with traditional Somali wall tapestries. He moved to Seattle from Lawrenceville nine years ago, but returned two years later. “I saw other places, other cities, but I liked Pittsburgh,” he said. But he found he could no longer afford Lawrenceville. Most of the Somali Bantu community had already left for Northview Heights. 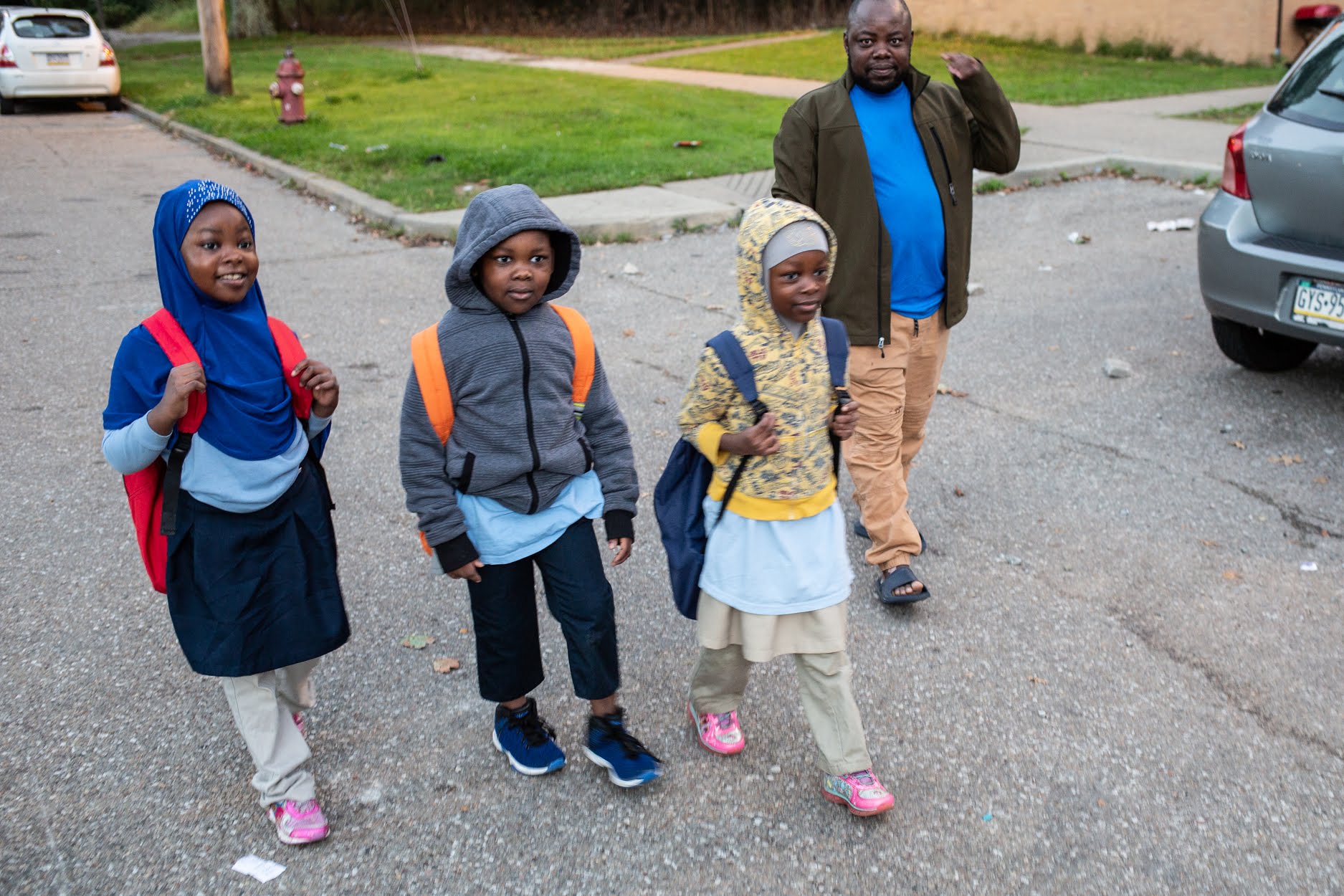 Juma Mkomwa walks his children, Arbay, Mohamed and Halima, to the school bus stop near the family’s home in Northview Heights on Oct. 10. (Photo by John Altdorfer/PublicSource)

Mkomwa’s family lives near the intersection of Mt. Pleasant Road and Chicago Street within the public housing development. The intersection in 2015 was identified by real estate data site Neighborhood Scout as the third most dangerous place in the country. Hundreds of children catch a school bus there each morning and get dropped off every afternoon.

Breingan said LU was founded by the mother of a girl who was shot in a drive-by. “Today we’re the safest neighborhood in Zone 2. At the same time, [the Somali Bantu] stand to benefit from a safer neighborhood. They’ve been priced out to one of the most dangerous neighborhoods in Pittsburgh.” 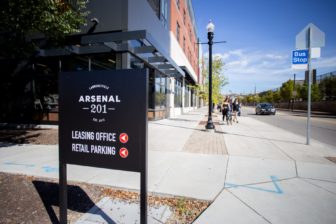 People walk along Butler Street past Arsenal 201, between 39th and 40th streets, in Lawrenceville. Arsenal 201 is one of the neighborhood's newest luxury developments.(Photo by John Altdorfer/PublicSource)

The windows at Arsenal School look out over the city's largest luxury apartment development, Arsenal 201. The first phase of the 625-unit project is complete, and available units range from about $1,000 per month for studios to $3,100 for three bedrooms. Camper recalled when the project was in its planning stage.

“They kept asking for our input and I was like, ‘Why?’" she said. "There will never be a time that I will have kids who walk across the street from Arsenal 201. Because that housing is never going to be family oriented. You're not attracting families with children who will attend our public schools.”

Breingan said that of the hundreds of rental units newly built in Lawrenceville during the past five years, only 10 are priced to be affordable to those earning 80 percent of the area median income or below.

"So much of the housing production that has been created has been at the high end of the market, largely for one-bedrooms,” he said. “Are we really providing opportunities for families to live here — for people to really grow roots in the neighborhood?”

3 thoughts on “Booming Lawrenceville has priced out some residents. Would inclusionary zoning prevent displacement?”