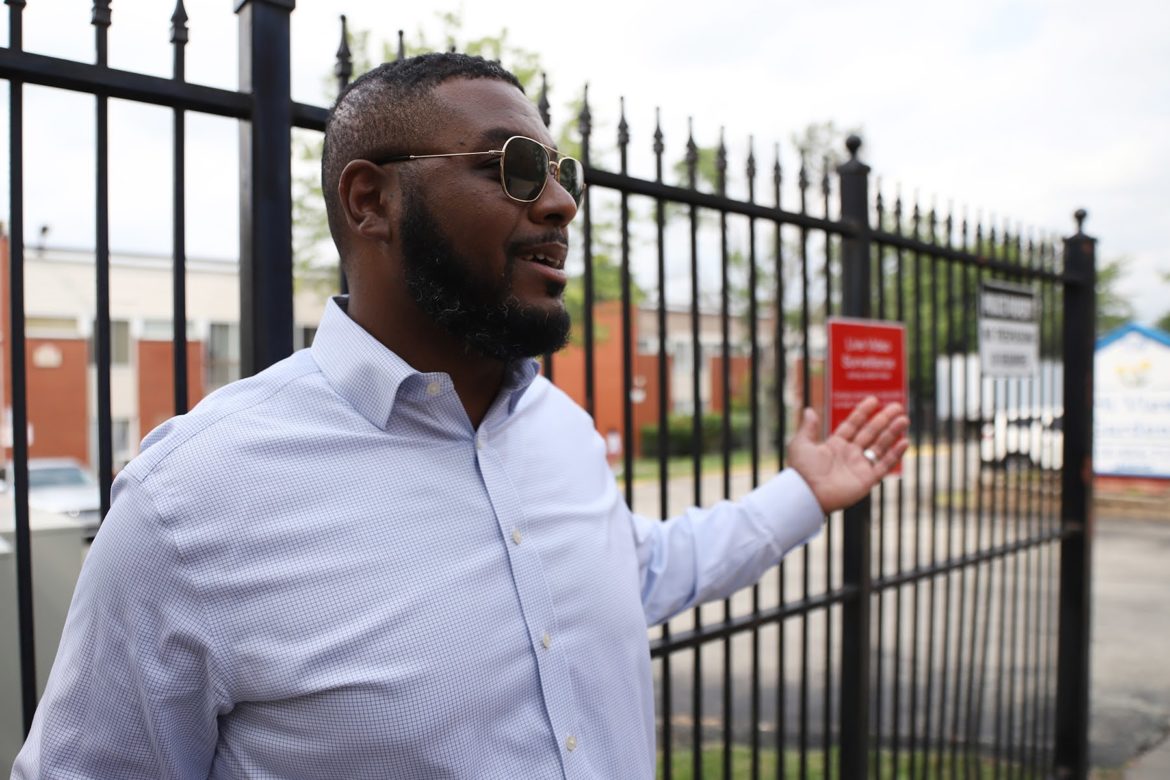 State Rep. Austin Davis, D-McKeesport, stands in front of Hi View Gardens, an affordable housing complex purchased in 2018 by PNC Bank. “They need to address the safety concerns immediately,” said Davis. “After reading your story, my initial question is: Is it safe for the people who live here to live here?” (Photo by Ryan Loew/PublicSource) 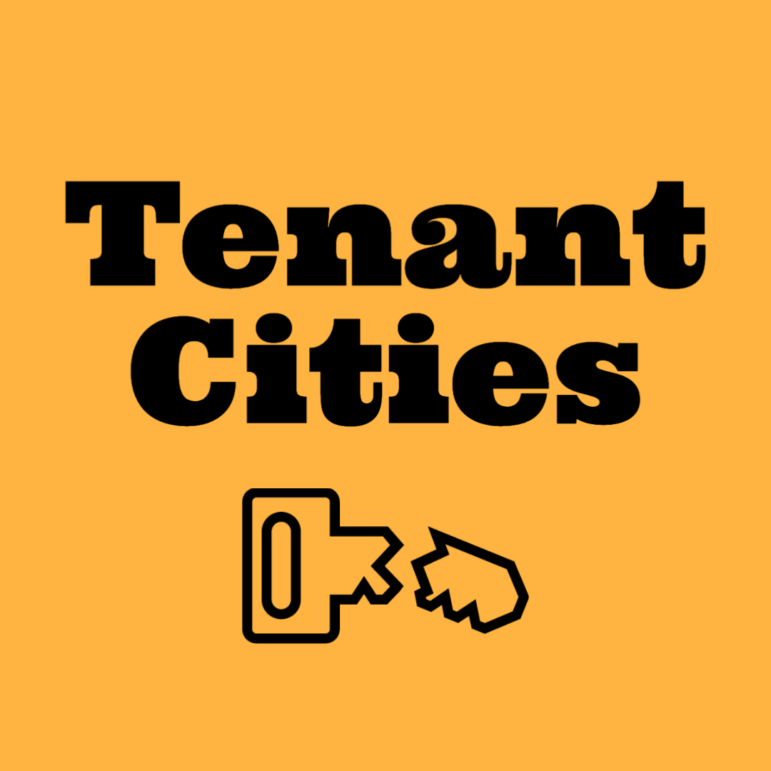 PNC Bank has pledged “immediate action” to address concerns of tenants at an affordable housing complex that it owns in McKeesport, after a PublicSource and WESA investigation revealed health and safety problems. That promise came as elected officials called for prompt improvements to two troubled bank-owned properties that house some 200 low-income households.

“PNC is responsible for ensuring that its tenants have decent living conditions,” Congressman Mike Doyle, a Democrat whose district includes McKeesport, said in a statement to WESA and PublicSource. “... And what has been described doesn’t seem to come close to meeting that standard.”

Doyle continued: “I expect this situation to be rectified immediately – and that PNC will move forward on their larger reinvestment plans rapidly.”

PublicSource and WESA reported that PNC in 2018 bought two limited liability companies that own the 11-story Midtown Plaza and the five-building Hi View Gardens. The properties are a few blocks apart and close to McKeesport’s Lysle Boulevard. Under PNC’s ownership, they have been managed by Maine-based Preservation Management Inc., which has not responded to requests for comment.

Richard Bynum, PNC’s chief corporate responsibility officer, told WESA and PublicSource that the bank had “made major investments over many years in Pittsburgh and across our footprint, specifically to improve low- and moderate-income communities, so this situation is especially disheartening and completely unacceptable.” He added that “the issues about which we have recently learned at Hi View Gardens are not reflective of this commitment or of PNC’s values.”

PublicSource and WESA reported that:

The 42% figure is “a huge number. I think that has to be corrected immediately,” said state Rep. Austin Davis, D-McKeesport, as he was interviewed in front of Hi View on Thursday. “Then we need to talk about, what’s the long-term plan for this housing complex, how do we maintain affordable housing here, how do we make sure these residents are living in a good quality environment but have the option to stay here.” 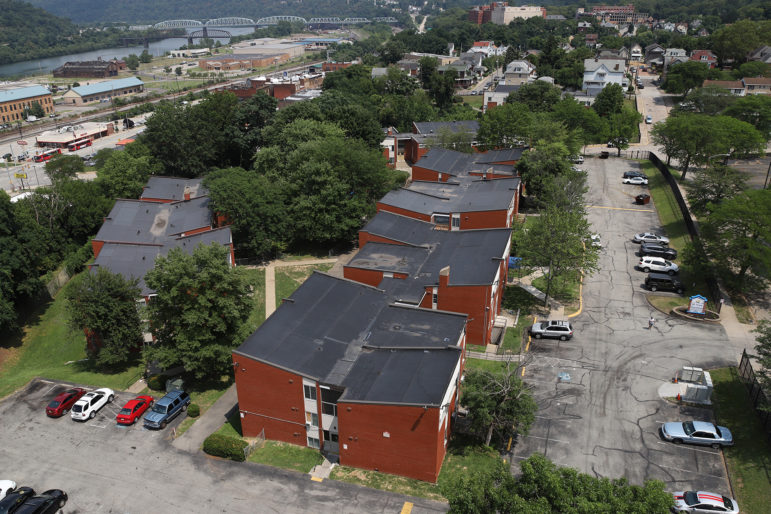 Davis added that he spoke with PNC officials shortly after reading the WESA and PublicSource stories, calling it “a very productive conversation.”

PNC was “deeply disappointed to learn of the issues tenants have been facing at Hi View Gardens,” Bynum indicated, in a written statement in response to the reporting by PublicSource and WESA. “The conditions as reported are unacceptable. While PNC doesn’t manage the property, we are taking immediate action to ensure that tenant concerns are addressed.”

PNC officials, including Bynum, plan to meet with members of the Hi View Gardens Tenant Council and an attorney at the nonprofit Community Justice Project [CJP] this week. CJP represents the council, which formed in May. “We potentially will arrange discussions with a broader group of residents as well,” Bynum said.

He reiterated PNC’s prior statement to PublicSource and WESA: that the bank is committed to buying affordable housing in numerous communities and preserving rent protections, rather than seeing others purchase it and raise rents to market rates.

PNC told WESA and PublicSource that the bank is seeking nonprofit development partners to put in new applications for tax credits to renovate both properties. PNC’s executive vice president in charge of tax credit solutions, Todd Crow, has said that the bank planned to seek that federal help for Hi View this year and for Midtown next year, though that timetable could be slowed because one of Hi View’s buildings is under repair for fire damage.

“I’m pleased that PNC has been working to preserve affordable housing in Allegheny County, but I am deeply concerned by the condition of the housing in Hi View Gardens and the length of time those conditions have been allowed to exist,” said Doyle, in his statement.

Bynum said the COVID-19 pandemic made it harder to maintain apartments by reducing maintenance staff’s access to apartments and disrupting the availability of materials and equipment, adding that “some things have improved” recently and PNC is “fully committed to accelerating the pace of improvements and enhancements to the service levels that residents receive.” 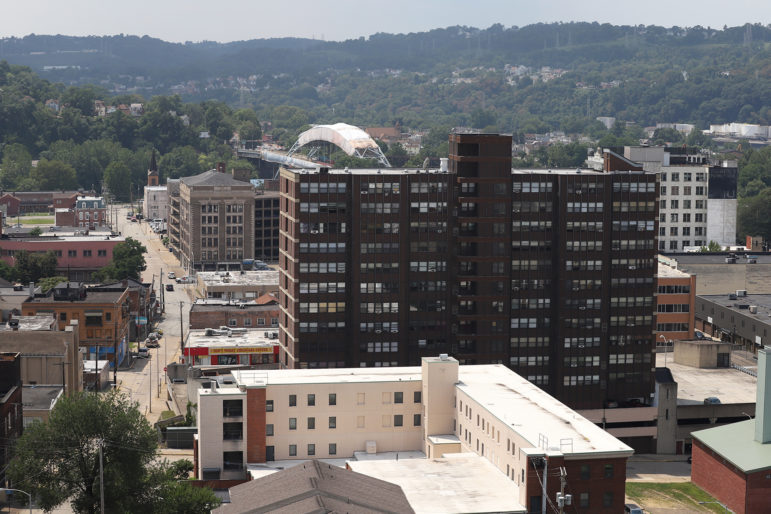 Allegheny County Councilman Bob Macey, a Democrat whose district includes McKeesport, said he was “tired of people using the pandemic as an excuse. It didn’t hurt Walmart. It didn’t hurt Amazon,” and it didn’t keep the councilman from improving his own house. “So I think those are poor excuses. And that’s what they are – excuses.”

Macey said he and other elected officials should “put PNC’s feet to the fire” if necessary. “I think it’s atrocious that a gazillion-dollar corporation should be allowing people to live in this kind of situation.”

PNC is the nation’s seventh largest commercial bank, and earlier this year it had $469 billion in assets, according to the Federal Reserve Board.

Allegheny County Executive Rich Fitzgerald’s office did not respond to requests for comment.

McKeesport Mayor Michael Cherepko said that after PNC bought Hi View and Midtown, bank officials sat down with him, in his office, and pledged to improve the properties. He said he was optimistic because the bank “has the wherewithal, the money, to make these living conditions better for our residents. But that has not been the case." 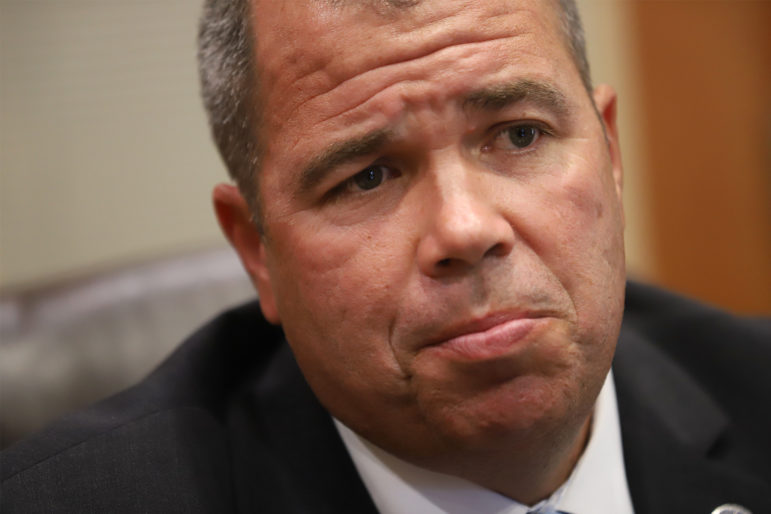 McKeesport Mayor Michael Cherepko. “What you see with PNC does not define the city, McKeesport, in the housing market,” he said. “We have landlords all throughout the city that truly have incredible places for people to live.” (Photo by Ryan Loew/PublicSource)

Earlier this year, the city ordered Hi View’s management to fix that complex’s malfunctioning fire alarm system. The mayor called the conditions described in the WESA and PublicSource stories “a disgrace.”

Cherepko said the city would be happy to meet with PNC officials, to lay out the problems at the properties and to help to implement solutions.

“I understand you're not going to come in and fix everything immediately, but there's things that need to be addressed,” he said. “And we're not talking about little Band-Aids, but big Band-Aids." 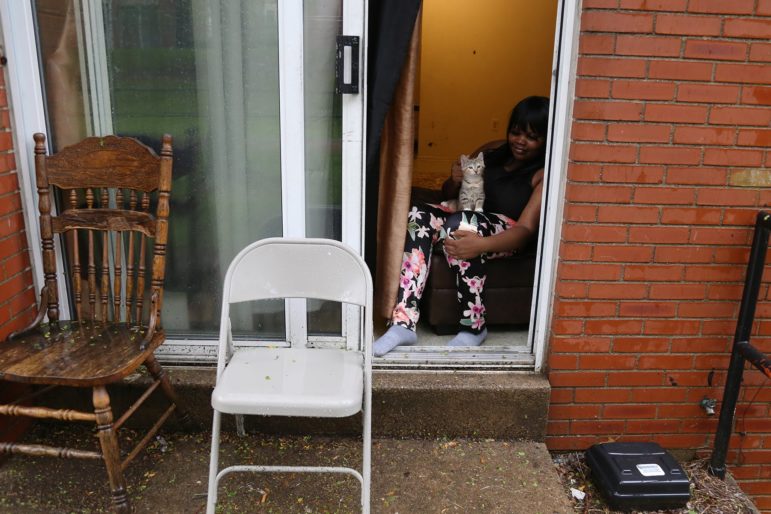 Hi View Gardens resident Daysha Hooper sits with her kitten, Simone. Hooper said the complex had “bad rodent problems” and that water leaks attracted insects which she had to address by buying bug spray. (Photo by Ryan Loew/PublicSource)

Davis said the reporting on Hi View and Midtown spurred him to ask House Urban Affairs Committee staff whether there are policy measures the state can consider to address quality problems in low-income housing. He added that he wondered if the Allegheny County Housing Authority could take over management of Hi View and Midtown.

The state representative added that he — like many others in McKeesport — didn’t know that PNC owned the properties until he learned about it from last week’s reporting. “I know for me, the ownership factor was huge,” he said, “and now actually being able to know who the owner is gives me somebody to hold accountable for what goes on here.”

This content was produced with support from the Doris O'Donnell Innovations in Investigative Journalism Fellowship, awarded by the Center for Media Innovation at Point Park University in Pittsburgh, PA.