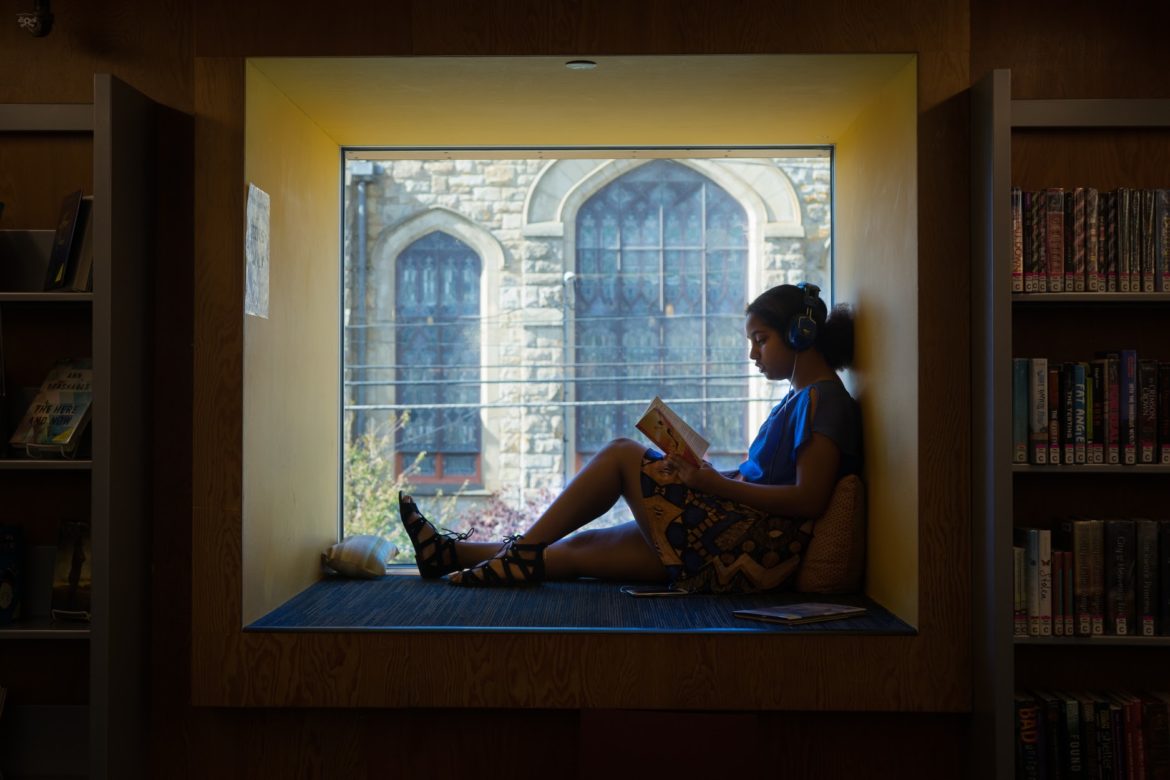 When Nsai Temko was attending cyber school, she felt cut off from the rest of the world. She credits a teen space at the Carnegie Library for helping her get through that time. (Photo by Aaron Warnick/PublicSource)

Cyber schooling was not among my top choices for the dream high school experience. It was the last resort after my mother and I discovered we could not afford to return to Orlando, Florida, and it was too late to enroll in Pittsburgh-area schools. I immediately despised the idea of being alone in the house all day to do school work. My mom suggested I lighten up and give it a chance. I listened to her advice and tried to enjoy cyber school. It was futile.

My mother was at work from dusk until dawn on weekdays, and I was not allowed to go out by myself. Sure, there were movies to watch, I had nail polish and journals to write in, but the lack of social interaction shackled my motivation to my bed frame. It got to the point where I would wake up for live classes, complete homework and go back to sleep. Nothing moved me forward; I continuously wallowed in depressing loneliness.

One day, I got a call from my sister, who is 16 years older than me and lives in California. We caught up on how life was going with her family, and I told her how I felt about my predicament. Being the problem solver she is, my sister sent me bus money and explained that if I pay for transportation, my mom would likely be more than willing to let me go out during the days. She was 100  percent correct. Shortly after the bus money came in the mail, I met with my dad. My parents are divorced, but he lives nearby.

We met at a cafe. He brought up the collection of poems I have written. They were collecting dust on my desk at home, and he thought I needed to do something with them. He told me about an awesome teen space at the Carnegie Library in Oakland.

There, I could bind all my poems into a chapbook. Using the transportation funds from my sister, I convinced my mother to allow me to go to the library. Nsai Temko pictured in the teen space of the Carnegie Library in Squirrel Hill. (Photo by Aaron Warnick/PublicSource)

In the library, I met a librarian named Ms. Sandra. She asked me if I needed anything and then caringly listened to my awkward giggles and thoughts about poetry and chapbooks. We sat down and talked about putting all my poems into a zine. A zine is a personal, handmade way of exchanging information! They can have all types of designs, forms and purposes.

If it wasn’t for the teen space, meeting its wonderful people and being given resources, I would have not had the opportunity to present my poetry collection to the public. I would still be fighting against the thoughts that chip away at my will to get out of bed and brush my teeth. My grades would still be dropping, and I wouldn’t feel nearly as accomplished as I do today. The teen space gave me such a strong sense of security and ability to be myself.

Ms. Sandra showed me different methods of working with paper, scissors, glue, needles and thread. With some wondrous experimentation, I began to work on turning my loose-leaf creations into a bound zine.

After a month of consistently visiting the library’s teen space and working on this collection, I came up with a name. Through this period of fighting the urge to sleep or soak in sadness, I gained some clarity. A path of positivity paved its way through a forest of hopelessness. I earned that hope and focus, and thus, the poetry collection was titled, “Won Clarity.” Nsai Temko's favorite poem she wrote is this one, entitled 'Darling, Your Future.' (Photo by Aaron Warnick/PublicSource)

Even if other teens aren’t going through what I went through, there are enriching activities for everyone available in the city. Librarians can help to build up resumes and project proposals. Some libraries have studios where teens can record music.

Teen spaces are great for study sessions or group meetings. There are organized activities like making pancakes or learning how to knit and gaming time. No matter a teen’s identity or interests, there is something for everyone. The cover of the chapbook Nsai Temko created at the Carnegie Library teen space. (Photo by Aaron Warnick/PublicSource)

There are also events that offer similar components to teen spaces. To find those, it’s best to look at community websites or check out posters at cafes and laundromats. When it comes to finding teen events and spaces that cater to certain interests, look for people who have matching interests and hit up Google. When I became interested in performing poetry, I googled “poetry slams for teens Pittsburgh” and I was pleasantly surprised to find Steel City Slam’s poetry workshop for teens located at the East Liberty library.

In whole, teen spaces are extremely important and can help an entire generation of people find their voices and prosper at no cost. I hope to see more teen spaces and, because I know the hope and direction they can put in a struggling teen's life, I want to be a part of creating them.