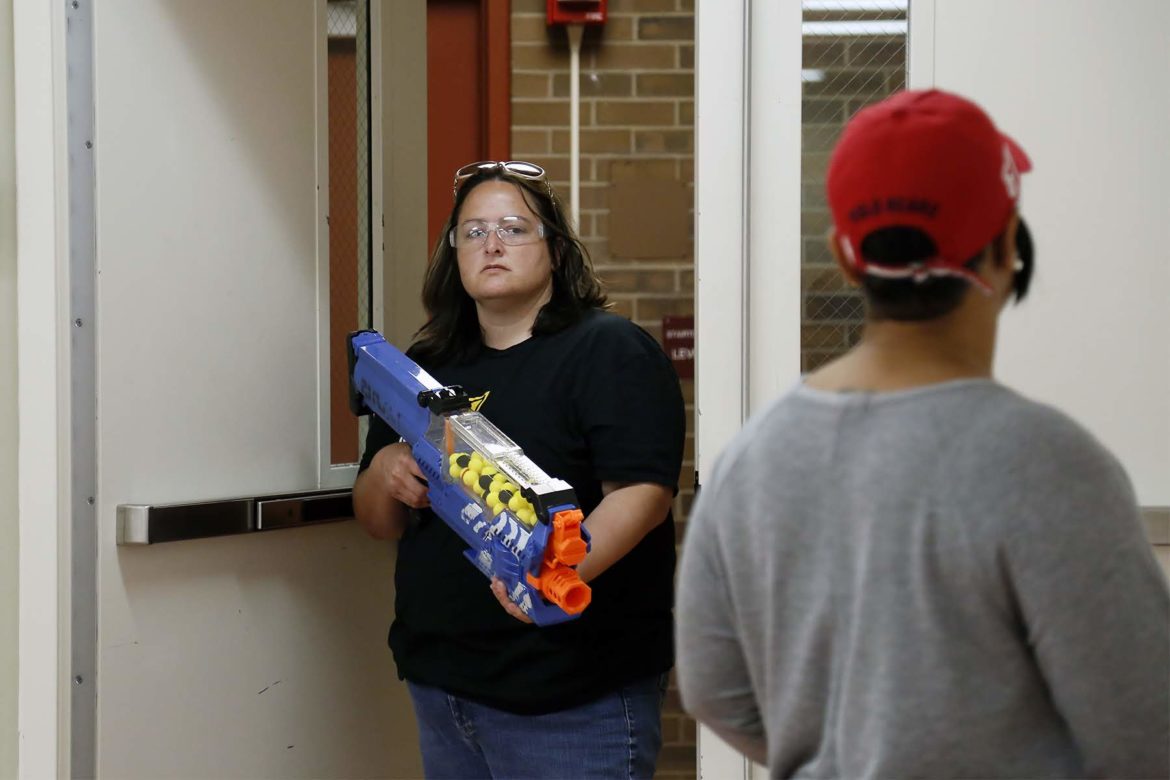 The same day protestors gathered outside Senate Majority Leader Mitch McConnell’s home to demand gun law legislation in the wake of the El Paso and Dayton mass shootings, Pittsburgh Public Schools administrators hid under desks as their colleagues shot at them with rapid-fire Nerf guns.

The same week that America saw a 300% spike in bulletproof backpack purchases, the school district’s Chief of Safety George Brown told a room full of principals that their students know who among them is a threat and who is getting bullied. “It’s important that you listen. The kids know everything."

Pittsburgh Public Schools [PPS] invited PublicSource to observe a two-day ALICE Institute training on Aug. 6 and 7 at the Pittsburgh Gifted Center in Crafton Heights. The name of the training is an acronym for Alert, Lockdown, Inform, Counter and Evacuate. The institute, which was founded after the 1999 Columbine High School shooting, instructs students, teachers and administrators how to fight back, or “counter,” a shooter.

Administrators shut the classroom doors and turned off the lights. They closed the blinds and hid under tables and chairs. In the adjacent classroom, a popping sound erupted, followed by squeals and shouts. The room hushed.

“Oh, I feel nervous, and I know it’s a drill,” said one principal, hiding under a desk.

A man in a yellow hooded sweatshirt is the shooter. He entered the classroom, and the participants cowered. He fired a spray of Nerf balls into the room and under the tables. People covered their heads. After the shooter left the classroom to enter another, ALICE Training Institute instructor John Lubawski told PPS trainees, “That was 32 seconds. He killed all of you.”

Lubawski told participants after the drill that it took the gunman five minutes to enter and shoot everyone in four different classrooms. He counted the victims in the hallway and said “95%” would have died. This exercise was to demonstrate the dangers of a “traditional lockdown,” which entails locking a classroom door without barricading it and hiding in place. If PPS employees had blocked the door with classroom furniture, tried to flee or swarmed and tackled the gunman, Lubawski said they’d have a better chance of survival.

During scenario drills, PPS staff learned to distract the shooter by throwing foam balls at him while screaming and running. They developed scenarios for their own schools and plan to instruct their staff in ALICE tactics this coming school year.

The drill participants also learned to “swarm” the gunman. Individuals each selected a limb of the intruder, “hugged” it and used their body weight to bring the gunman to the ground. PPS staffers would count the number of people the gunman was able to shoot during about a dozen scenarios. Each time, fewer people “died.”

“Countering is not about fighting,” Lubawski said. “It’s about exploiting weakness.”

Lubawski advised participants to “incorporate as much realism as you can” when conducting ALICE drills at their schools. He also said to not allow students to “die” in the scenarios, meaning, if a student is shot by a Nerf gun, they shouldn’t lie down on the floor and say they are dead.

Lubawski then asked if the district has received pushback about ALICE training. Brown said yes. Lubawski suggested the district host a parent pizza night to discuss the training and dispel concerns.

The training went on. After several drills, the PPS employees appeared more comfortable grabbing, throwing and tackling. After successfully disarming the gunman, employees would high-five and cheer.

While ALICE proponents claim their training will better protect students, the concept of “countering” has also been criticized by some parents, teachers and security experts.

Kenneth Trump, president of Cleveland-based National School Safety and Security Services, served as an expert witness in civil cases regarding the Sandy Hook and San Bernardino school shootings. He challenges the idea that a few hours of training will prepare a younger person to disarm a shooter.

“Police and military professionals train their entire career to make such decisions with surprisingly lower rates of accuracy than many might believe,” Trump said. 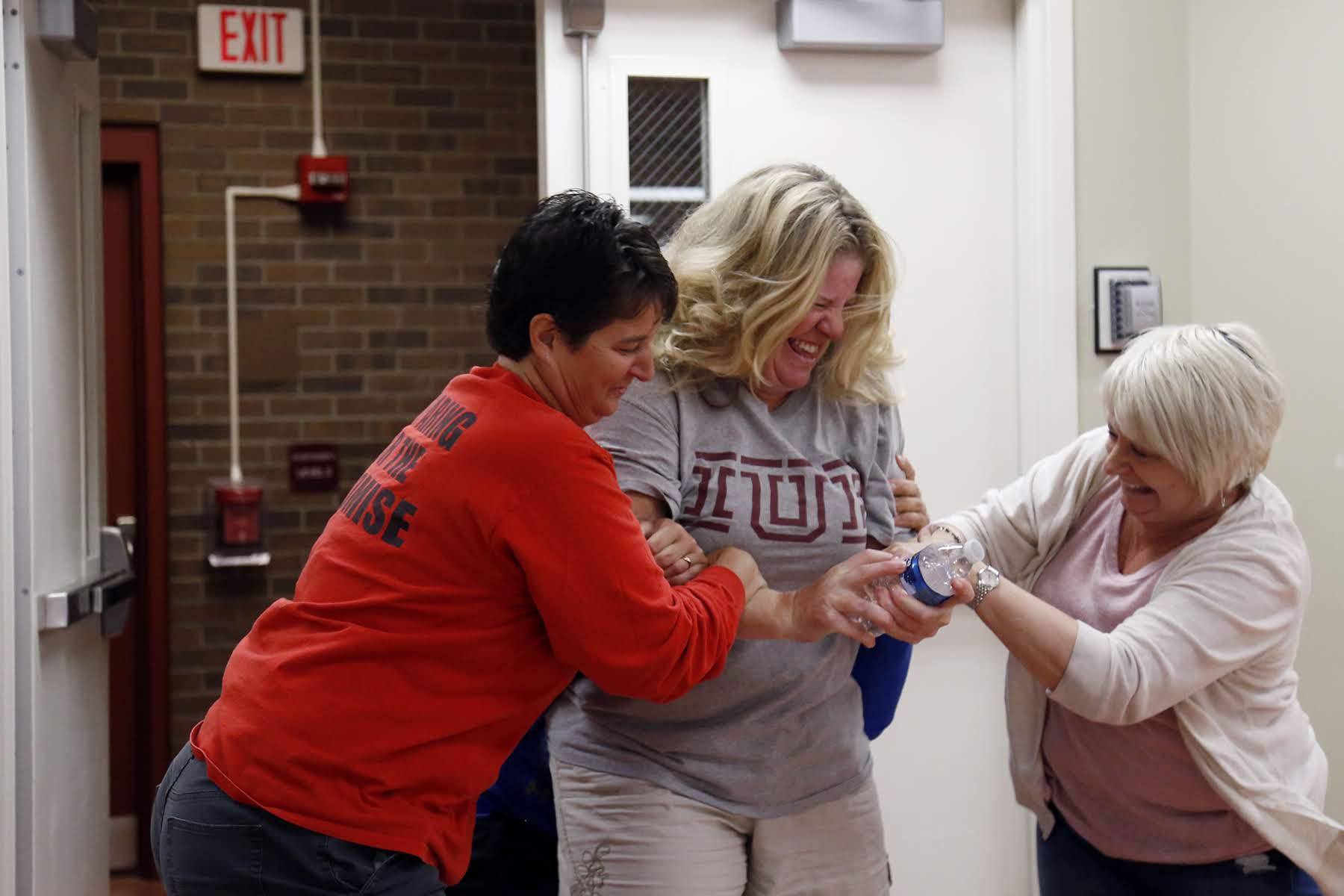 Using a water bottle as a stand-in for a gun, Karen Arnold (center), principal at Fulton PreK-5, is swarmed by Patti Camper (left), principal at Arsenal 6-8, and LouAnn Zwieryznski (right), principal at Liberty K-5, during ALICE training on Aug. 7. (Photo by Ryan Loew/PublicSource)

During the discussion portion of the training, one PPS principal challenged Lubawski on the dangers of traditional lockdown. The principal explained that his school has a daycare, including children as young as 3 months old, and asked the instructor how he expects staff to evacuate babies.

“You can’t walk an emergency crib out of a daycare,” the principal said. “There are so many variables. I can’t move those babies.”

Lubawski said to never let someone into a room after an active shooter event has been announced. To that, the principal said he’d never tell one of his staff members with a child in daycare that they “better not run towards your baby.”

“You’ve got to make this personal,” Lubawski replied, indicating that each principal must tailor ALICE to their particular school and situation.

The two-day training and certification for the 50 participants cost $16,500, according to PPS chief operations officer Pam Capretta. Under Act 39 of 2018, Pennsylvania schools must conduct a school security drill with students, in place of a fire drill, within the first 90 days of each school year. PPS decided to use ALICE training.

“I don’t know what's going on in this world. People want to hurt our babies. Our job is to prevent it.”

In June 2018, Gov. Tom Wolf signed a bill to allocate $60 million a year for schools to use in security upgrades or safety programming. Capretta said PPS hasn’t received additional money from the state for safety and security measures. “It’s very unfortunate,” she said.

Lubawski also addressed special needs concerns during the training. He recommended that students with sensory sensitivity, anxiety or other disabilities not participate in ALICE drills. He described one student with autism who ran out of his ALICE training, down the hall and out of the school. Lubawski said he ran after the child 400 yards into the woods.

As chief of school safety, Brown agreed that student disability and mental health should be a priority when it comes to ALICE training. Students with disabilities may not be able to safely evacuate.

“Students overwhelmed by stimulus will not be running out of the building,” he said. “A student with autism may run out and right into trouble.”

Brown also said elementary-aged students will not be taught to counter. Instead,  “younger kids will barricade, if at all possible.” He said the training isn’t “cookie cutter” because each school is different and each child is different, too.

However, Lubawski noted that “a 6-year-old might be able to swarm where a senior may not.”

Parents may opt their children out of any ALICE training, but Capretta said there are still obstacles if the student goes to school that day.

“We would prefer if a student dropped out [of the training], they pick up their child. The kids will hear and have exposure to the drill if they’re in the building,” Capretta said. 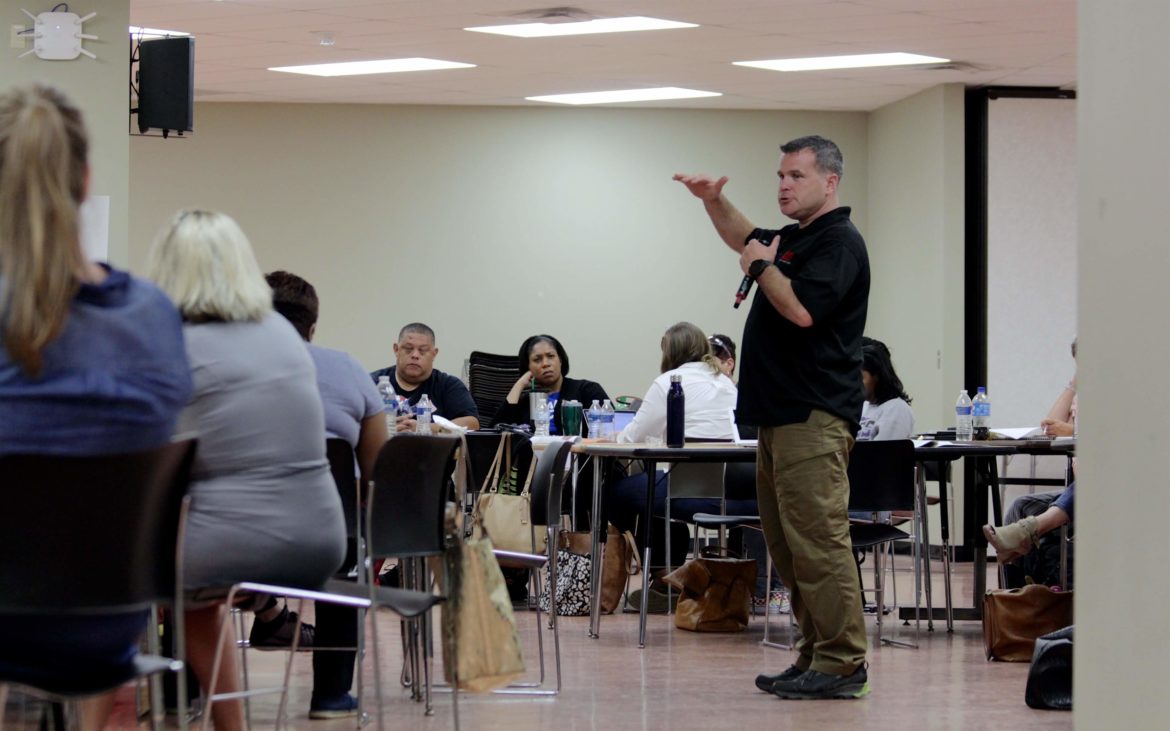 Every PPS school has a safety plan that is submitted to Brown’s department each school year. That way, school police officers know exactly what to do during an event. His police force, he said, is also in frequent communication with the Pittsburgh Bureau of Police. Brown said PPS is doing everything in its power to ensure the safety of students and staff, including the use of ALICE training.

“I don’t know what's going on in this world,” Brown said. “People want to hurt our babies. Our job is to prevent it.”