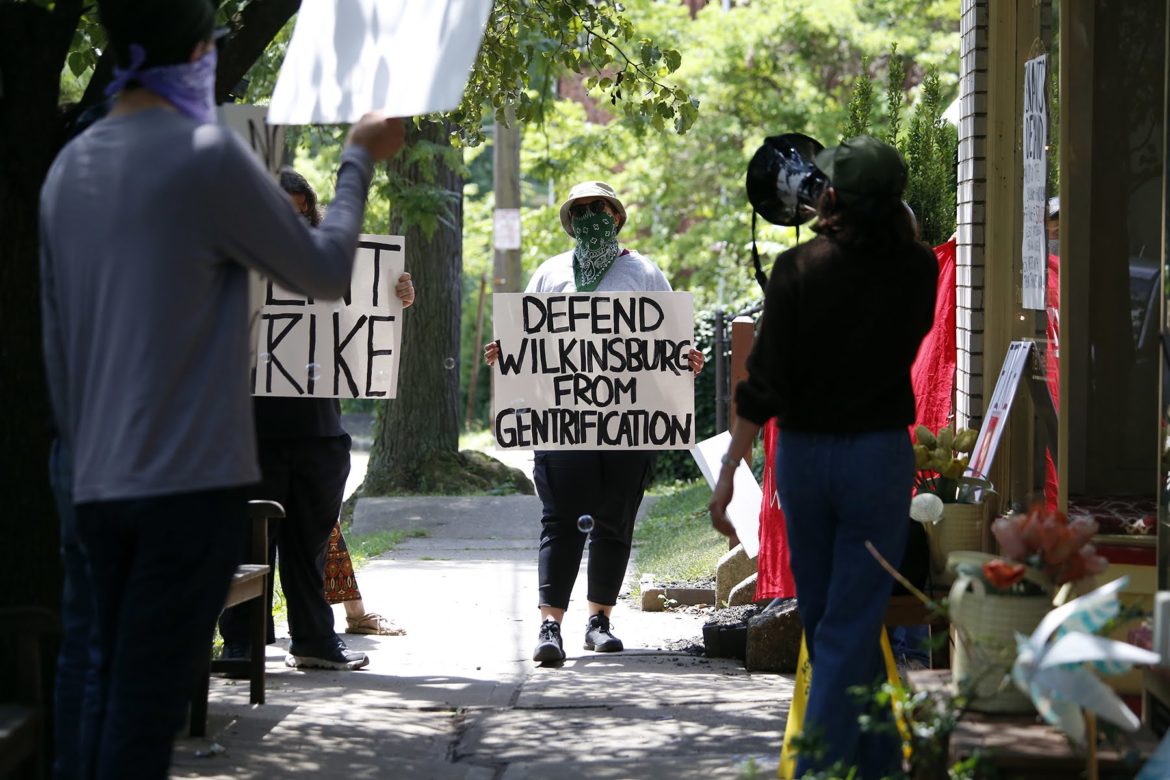 Protesters gather outside of the Wilkinsburg offices of C.P. Development, also known as Regent Square Rentals, on June 20, 2020. (Photo by Ryan Loew/PublicSource)

When Reed Van Schenck saw his photo in the window of his landlord's office, along with a sign saying he was "wanted for questioning" by Wilkinsburg police, the effect was "terrifying," he said.

"I knew I had not done anything wrong," Van Schenck, a graduate student at the University of Pittsburgh's Department of Communication, said in an interview. All he had done, he said, was distribute flyers demanding that his Wilkinsburg-based landlord, C.P. Development, also known as Regent Square Rentals, negotiate with tenants over potential future evictions and the quality of maintenance.

His belief that flyering is not criminal provided little comfort. "I don’t trust the police to be on the right side. I trust them to be on the side of the landlord.”

The pandemic crisis has prompted tenants to organize in the Pittsburgh region, and activism in Wilkinsburg is emerging as a prime example. Tenants organized under the banner of the United Neighborhood Defense Movement [UNDM] have protested at C.P. Development’s office.

Now the UNDM is calling for a “rent strike” against C.P., starting Aug. 1, and is among groups planning to protest at 3:30 p.m. Friday on Grant Street, Downtown, against a potential surge in evictions when current moratoriums are lifted.

The pictures in C.P.’s windows — removed in June — and tenants’ beliefs that they’ve been tailed by police have some of them worried that the borough will favor its biggest landlord over its residents. 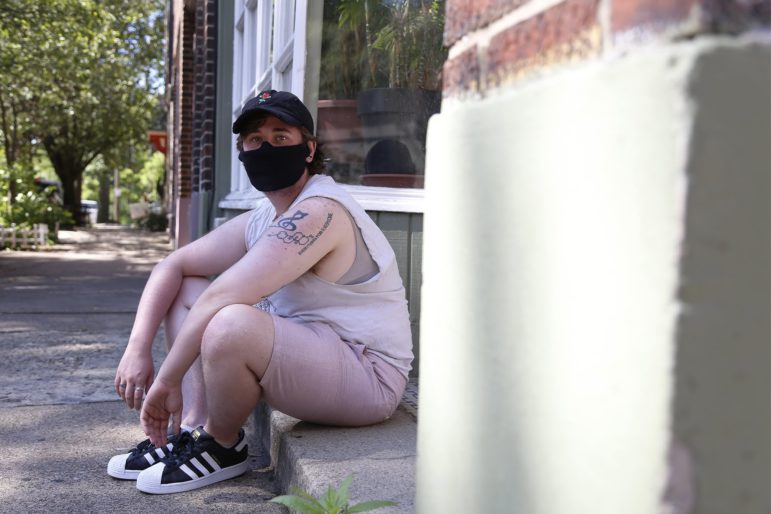 “Tenants pretty much everywhere in the country have little to no bargaining power with their landlords,” said Reed Van Schenck, pictured here, in Wilkinsburg, on July 1, 2020. “The landlords are the ones that own the property, and there’s infinite number of people who want your apartment.” (Photo by Ryan Loew/PublicSource)

Wilkinsburg Police Chief Ophelia Coleman said her department isn't taking sides. Officers have monitored protests, she said, and the department has concern with a possible connection between organizing and graffiti, but that’s all.

As a result of county, state and federal actions taken in response to the pandemic, landlords haven’t been allowed to file new evictions for failure to pay rent since mid-March. On Thursday, Gov. Tom Wolf ordered that economic evictions, which were set to resume after July 10, would instead be barred until August 31. Tenant advocates have been concerned for months that whenever evictions are allowed to resume, a large number of filings could drive lots of displacement.

Some point to cities that saw large-scale evictions in June — 2,182 in Houston and 1,356 in Milwaukee, for instance — even as the pandemic rages.

"Evicting people in a time when going without housing can be fatal is cruel and unnecessary," said Josh Graber, a writer and audio producer who recently moved out of a C.P. apartment, and is part of the organizing effort. "And that’s exactly what’s happening with landlords all over the country — cruel and unnecessary eviction during a time when going without housing could end someone’s life." 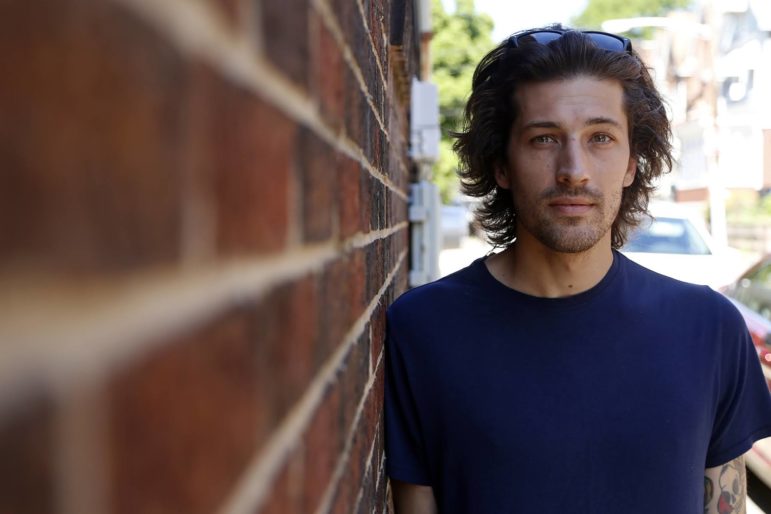 "Evicting people in a time when going without housing can be fatal is cruel and unnecessary," said Josh Graber, a writer and audio producer who recently moved out of a C.P. Development apartment, and is part of the tenant organizing effort. (Photo by Ryan Loew/PublicSource)

C.P. Development has only filed one eviction this year, in February. Calls to the company’s owners, Charles and Peter Patterson, were not returned.

The Apartment Association of Metropolitan Pittsburgh has noted that building owners have bills to pay, and that people having trouble making rent should reach out to the landlord to discuss payment plans.

If evictions surge, Wilkinsburg could be hit hard.

The borough hosts more than 5,000 rental units, which house more than three in five of its residents, according to U.S. Census data analyzed at CensusReporter.org. C.P. owns 122 properties in Wilkinsburg, trailing only the borough government in terms of parcels owned in the inner suburb, according to county records updated in January. The company also owns six properties scattered through Edgewood, Swissvale and Pittsburgh, according to the records.

In March, according to UNDM organizer Anne Grayson, two C.P. tenants wrote to the landlord, asking for negotiations aimed at improving maintenance and preventing evictions during the crisis. Those tenants have since ceased their involvement, she said. In stepped UNDM, an organization created this year which boasts chapters in five cities and says on its website that it "exists to defend working class housing and neighborhoods."

“Tenants pretty much everywhere in the country have little to no bargaining power with their landlords,” said Van Schenck. “The landlords are the ones that own the property, and there’s infinite number of people who want your apartment.” That’s why it’s crucial that tenants start “coming together as a collective, as a class, frankly, and fighting back against the owning class.”

In early May, Van Schenck and others began distributing flyers, calling for a rent strike if C.P. did not come to the table. In a rent strike, tenants withhold payment until demands are met.

A few weeks later, said Van Schenck, C.P. employees showed up at his apartment, and asked about smoking in the building. That day, he saw his picture and those of other tenants in the building, calling on his neighbors "to turn against me, to call the police, which obviously they didn’t do.” Not long after, he went to C.P.'s office to pay rent and saw his picture and others in the window. Amid the pictures was a note reading: "Do you recognize these people? Wanted for questioning. If so contact Wilkinsburg Police Department at (412) 244-2913."

Later Grayson’s picture was added, as was Van Schenck’s bio from Pitt’s website. 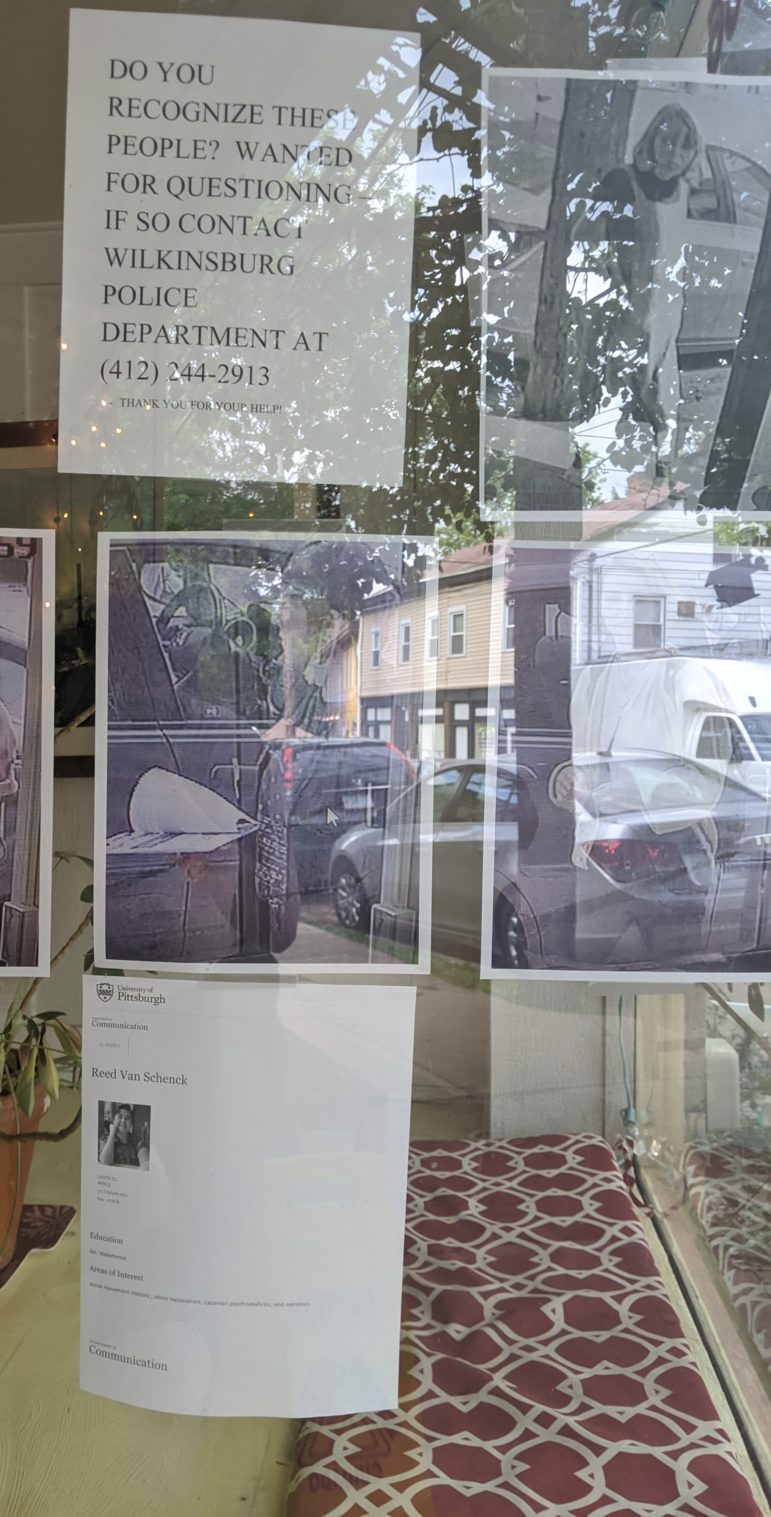 The windows of C.P. Development's office in Wilkinsburg, on June 3, included pictures of four people (one of whom has been cropped out at the person's request), Reed Van Schenck's profile from the University of Pittsburgh's website, and a claim that they were wanted for questioning by the Wilkinsburg police. (Courtesy of Reed Van Schenck)

Van Schenck and Grayson said they were tailed, separately, by a person they recognize as a Wilkinsburg police officer. They said they’ve since seen the same officer monitoring their protests outside of C.P.’s offices.

Coleman said the photos may have been related to a graffiti investigation, not tenant organizing. The borough has seen a surge in hammer-and-sickle symbols, associated with communism,  painted on private and public property, at the same time as rent strike flyers have appeared on utility poles.

Neither Van Schenck nor Grayson have been charged with any crime, according to online county dockets. Grayson said she was unaware of the graffiti accusation until PublicSource told her about it, adding that “no one in the tenant movement in Wilkinsburg” has been cited for that.

PublicSource on June 5 filed a Right-to-Know Law request with Wilkinsburg, asking for all communications this year between borough employees and C.P. The borough did not respond within the time limits in state law, and PublicSource has filed a pending appeal of the de facto denial.

Coleman said her officers are allowed to moonlight for businesses, but she must sign off, and none of them are working for C.P.

Borough Councilwoman Denise Edwards, who represents the 3rd ward, in which most of C.P.’s properties are located, said that if there is any special arrangement between the landlord and police, she isn’t aware of it. “There’s no back door or special anything like that to my knowledge.”

Grayson said UNDM is now demanding improvements to C.P.'s apartments, more responsive maintenance, an end to what it calls harassment and intimidation of tenants, the firing of two employees accused of bullying tenants, and an end to rent collection during the crisis.

The group’s flyers include complaints about maintenance and say: “We refuse to pay rent while workers are being laid off all across the city.”

Grayson continued: “We definitely have a will to negotiate, but some of [the demands] are basically non-negotiable.” After one protest, she said, attorney Wayne Cobb called her, representing C.P. She said that Cobb told her he couldn’t talk about rent collection, but would be willing to discuss other demands. The conversation ended with neither side giving ground. Cobb did not respond to a call for comment. 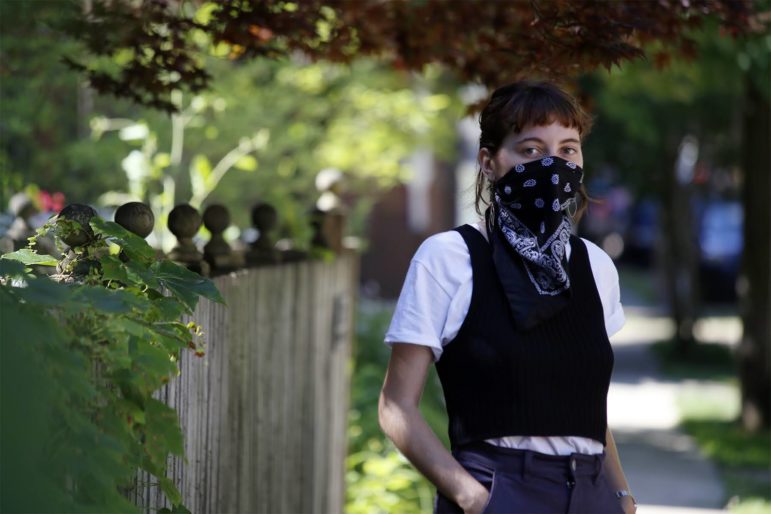 “We also have an interest in struggling against C.P. because they’re taking part in buying up immense amounts of property and … beginning to gentrify the borough," said United Neighborhood Defense Movement organizer Anne Grayson, pictured here in Wilkinsburg on July 1, 2020. (Photo by Ryan Loew/PublicSource)

Grayson, who lives in Wilkinsburg but not in a C.P. building, said that “probably 50 or 60 different tenants have gone on rent strike” against C.P., and UNDM is looking to expand that number, effective Aug. 1.

It’s about more than rent and maintenance, she said. “We also have an interest in struggling against C.P. because they’re taking part in buying up immense amounts of property and … beginning to gentrify the borough.”

Edwards said she has long hoped for an independent organization of renters in Wilkinsburg. She said development in Pittsburgh’s East End is bleeding across the border, and borough officials “were getting the sense that long-term residents were being pushed out.”

She said she knows nothing of UNDM, and added that the landlord “has made a contribution in dealing with some of the blight” in the borough.

“I don’t think C.P. as a landlord is reacting any differently from any other landlord in terms of the market forces,” she said. But market forces don’t protect long-term residents. “We have to find that balance. We don’t want to grow up to be Lawrenceville, let’s put it that way.”

Allegheny County tenants who have lost 30% or more of their income since March 1 can now apply for as much as $1,500 a month in rental assistance, for six months, plus help with utilities, via the Allegheny County CARES Rent Relief Program.

Correction (7/24/2020): An earlier version of this story incorrectly indicated that another owner held the second-largest number of properties in Wilkinsburg.