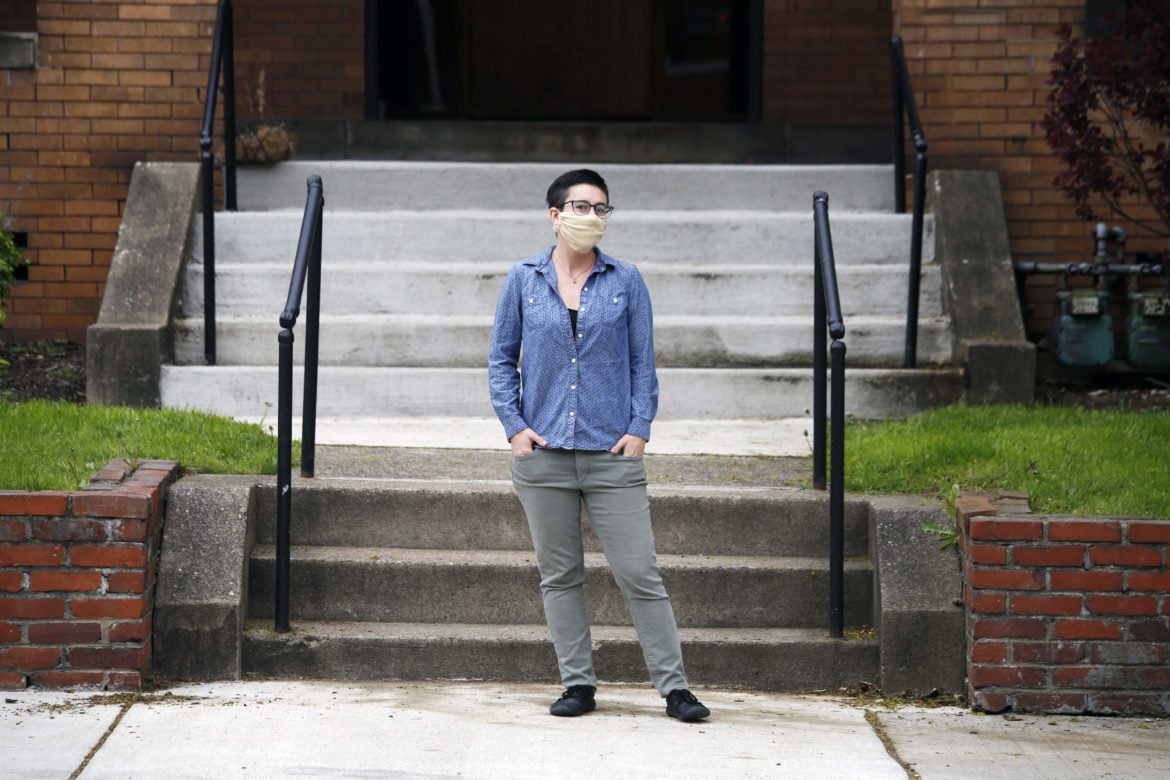 Friendship resident Trieste Devlin is one of 21 JJ Land Company tenants who signed an April 30 letter asking the East Liberty-based company to suspend rent "for the duration of the COVID-19 pandemic,” to waive back rent and late fees and to agree to monthly meetings to address concerns including "unsolved maintenance problems." (Photo by Ryan Loew/PublicSource)

Update (5/7/2020): Evictions and mortgage foreclosures are now on hold, statewide, through July 10, under an order issued by Gov. Tom Wolf and endorsed by Attorney General Josh Shapiro.

Tenants struggling with the rent, and concerned with getting the boot — or big bills for back rent — are getting organized.

Late Wednesday, Allegheny County President Judge Kim Berkeley Clark extended a pandemic-driven moratorium on evictions through June 1. That doesn't keep rent charges from piling up though, even as many unemployed tenants go without pay.

Coalitions of renters are bringing back the tenant council model, which largely hasn’t been a factor in Pittsburgh’s private apartment market for decades. They are pooling their power and urging landlords to waive unpaid rent during the coronavirus crisis.

Nationally, tenant troubles drew headlines in mid-April, when U.S. Rep. Ilhan Omar, D-Minnesota, proposed legislation that would nix rent and mortgage payments during the pandemic. There has been no indication that the bill will become law.

Locally, activists blocked the Greenfield Bridge on Friday to urge a pause on housing payments. A coalition called All-In-Pittsburgh is urging landlords to be patient with their lessees and to consider seeking mortgage deferrals. Tenants of Regent Square Rentals created a council that is asking for rent breaks, and scores of people who rent from JJ Land Company are following their lead. The Pittsburgh Union of Regional Renters [PURR] is assisting those, and other, uneasy tenants.

“People shouldn't even owe rent right now” because public health concerns prevent many from working, said Celeste Scott, a member of PURR's board who is also the affordable housing organizer for the advocacy group Pittsburgh United.

PURR started meeting regularly last year, is funded so far through the POISE Foundation, and is working with a dozen groups of tenants, according to an organizer's email response to questions.

PURR is "doing organizing, and they're doing it in a systematic way," said Kevin Quisenberry, an attorney with the Community Justice Project, part of the Pennsylvania Legal Aid Network, who communicates with, but does not represent, PURR. "It's a growth process."

It’s anybody’s guess whether that growth will outlast the current economic swoon. A voice for the region’s landlords said he doubted there is any broad trend toward tenant organizing.

Tenants "can band together to some degree" under state law, said Jim Eichenlaub, executive director of the Apartment Association of Metropolitan Pittsburgh. “But [landlords] are not negotiating with those folks.”

Landlords, he added, “have employees to pay. They have debt to pay on those buildings. They have utilities and taxes,” which won’t be suspended during the crisis.

Tenant councils are a regular presence in public housing, where resident participation in decision-making is strongly encouraged by the U.S. Department of Housing and Urban Development. They are also common in large, privately owned complexes in high-rent coastal cities. And decades ago, the now-defunct Metropolitan Tenants Organization of Pittsburgh and Allegheny County sought to represent the interests of local renters.

Pennsylvania’s Landlord and Tenant Act acknowledges that renters can band together "for any purpose directly related to their rights or duties" and bars landlords from kicking people out for participating in such groups. It doesn’t explicitly obligate landlords to bargain with tenant councils.

"There is a meritorious argument to be made that those provisions of the landlord and tenant act mean something, and they necessarily imply that landlords have to deal with a tenant organization, if one exists," Quisenberry said.

Eichenlaub, though, said the documents that define landlord-tenant relationships aren’t union-type collective contracts. They’re one-on-one leases, which “are individual contracts. … I’m not sure how an organization can negotiate on behalf of people that come and go in rentals,” he added. “I’m not sure how something like that would even work.”

Philadelphia’s Tenant Union Representative Network helps its member groups to defend renters against evictions and push for unit repairs. In New York and California, advocates for tenants contend that when renters organize, they can have more influence with regulators and with courts that hear housing-related cases.

Two JJ Land Company tenants said this week that they are concerned about the potential for large numbers of evictions when the moratorium is lifted, and worried about monster bills for overdue rent. They want to talk — collectively, rather than one-on-one — with their landlord.

Twenty-one tenants signed an April 30 letter, asking the East Liberty-based company to suspend rent "for the duration of the COVID-19 pandemic," to waive back rent and late fees and to agree to monthly meetings to address concerns including "unsolved maintenance problems."

"All we're hoping from that initial contact is for them to confirm receipt of our letter and to start scheduling with our representatives to sit down and talk to us,” said Friendship resident Trieste Devlin, a former robotics engineer who recently quit working as a barista at Starbucks because she thought the coronavirus made it too dangerous.

The JJ Land Tenants Council asked their landlord for some response by Monday, but did not get it by deadline.

JJ Land owns more than 100 properties throughout the county with more than 600 bedrooms total, according to county assessment records. The company did not respond to requests for comment made by phone, email and a note passed through a slot in their office door.

How do tenants organize?

Pennsylvania law sets no procedures for tenant organizing, and according to websites for California and New York tenant groups, there are no formal rules there either. Various guidelines can be found online. Best practices, according to Quisenberry, include the development of bylaws, open elections for officers and periodic meetings.

The JJ Land tenants are "figuring it out as we go with the guidance of PURR," said Devlin, of Friendship.

She said that a friend of hers, involved in the Regent Square Rentals tenant organizing effort, connected her with PURR. Separately, JJ Land tenant Daniel Unger of East Liberty reached out to the organization. PURR connected them to each other and to other tenants. They texted acquaintances in their buildings, circulated letters and posted flyers.

Word spread to other JJ Land buildings in the East End. The growing network — Devlin puts it at more than 50 tenants — has been coordinating and debating tactics online. 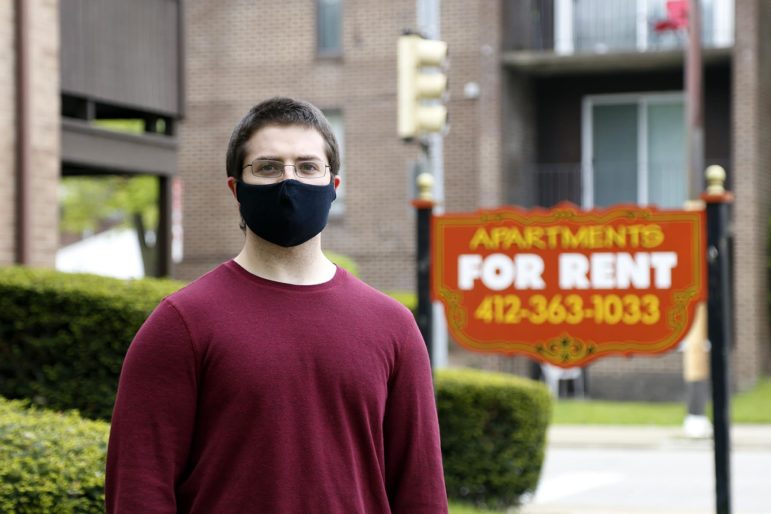 Daniel Unger, 25, of East Liberty, is a member of the JJ Land Tenants Council. (Photo by Ryan Loew/PublicSource)

The JJ Land Tenant Council is now trying to settle on a response to JJ Land's failure to acknowledge its letter, Devlin said. Talking with the press and communicating with elected officials are two tools. A more confrontational option: a "rent strike," or collective decision to cease paying.

Rent striking "is a really powerful tool that renters technically have," Devlin said. "It's also something that could put us as individuals in a lot of danger. ... If we do not pay rent, they have the power to, for example, evict us," to deduct unpaid sums from security deposits and to report the failure to pay to credit agencies, she said.

"I would say rent strike is definitely an option," Unger said. "Every tactic is on the table, up to and including that."

Quisenberry said there are certain circumstances under which tenants can justifiably withhold rent under state law — notably, a landlord's failure to address a health hazard, safety risk or other condition that makes the property partially or completely uninhabitable.

The Apartment Association’s Eichenlaub countered that tenants still have a legal obligation to pay rent. “Those who can, should, and those who are having difficulties should talk to their landlords about what they should do, with payment plans," he said.

Is there room for compromise?

Unger said he and other organizing tenants "are absolutely not deaf to the needs, concerns and material conditions that landlords face,” but want “a solution that makes sure everyone is taken care of."

He was furloughed from his job as a physical therapy technician in March, and is getting by on his fiance’s salary while he awaits processing of his unemployment claim. Devlin said she and her laid-off partner — whose unemployment compensation application hasn’t yet yielded a penny — are paying rent using money loaned by relatives. They said they know JJ Land tenants whose circumstances are much more dire.

Eichenlaub said many area landlords are "trying to be nice" to tenants who are unemployed, including offering partial payment plans.

Quisenberry said landlords are “more likely to be made whole by helping this tenant stay in their home until they can get the assistance that's coming, than you will by rushing in and filing an eviction action” whenever the moratorium ends.