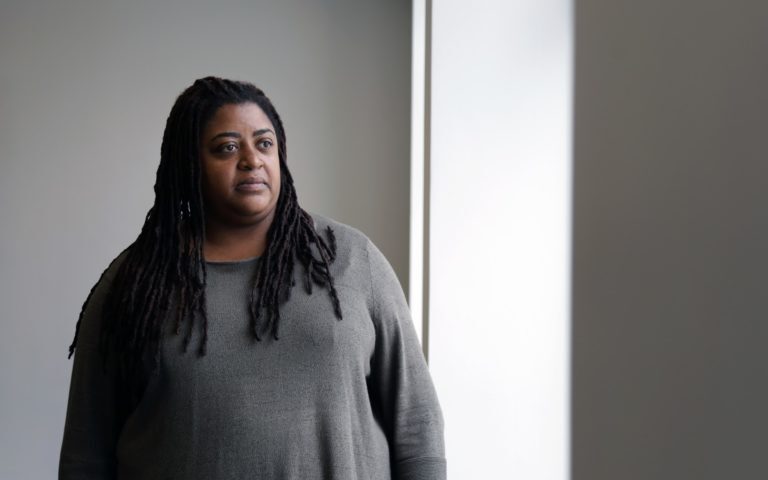 Tiffany Sizemore, leader of the the Juvenile Defender Clinic at Duquesne University. (Photo by Ryan Loew/PublicSource)

When news came that the Minneapolis Public Schools proposed to cut ties with their local police force, local lawyer Tiffany Sizemore saw an opportunity for kids across the Pittsburgh Public Schools district.

So, Sizemore, who leads the Juvenile Defender Clinic at Duquesne University, alongside Jeff Shook, an associate professor of social work at the University of Pittsburgh, penned an open call for Pittsburgh Public Schools to stop using police to manage children in their schools. Instead, they want to see an investment in restorative practices, along with counseling and mental health services.

In the wake of the death of George Floyd, a Minneapolis man who died May 25 after a police officer knelt on his neck for nearly nine minutes, Minneapolis Public Schools terminated its contract with the Minneapolis Police Department in a unanimous school board vote in early June.

In recent weeks, school board members, parents and community members in several cities across the nation — including Denver, Rochester and Charlottesville — have called for similar change in their hometowns.

Sizemore cited national data that shows more than 70% of high schools and about 30% of primary schools have sworn law enforcement officers routinely carrying a firearm on campus.

Pittsburgh Public Schools [PPS] has its own police force of about 20 officers, empowered to make arrests, though they aren’t authorized to carry firearms. The school district does not formally have an agreement with the Pittsburgh Bureau of Police that establishes how the departments coordinate, though steps were taken last year to formalize the roles.

The school board in October 2018 rejected a proposal to arm school officers, despite lobbying from PPS Chief of Safety George Brown Jr., who said officers needed to be armed to keep schools safe from outside threats. 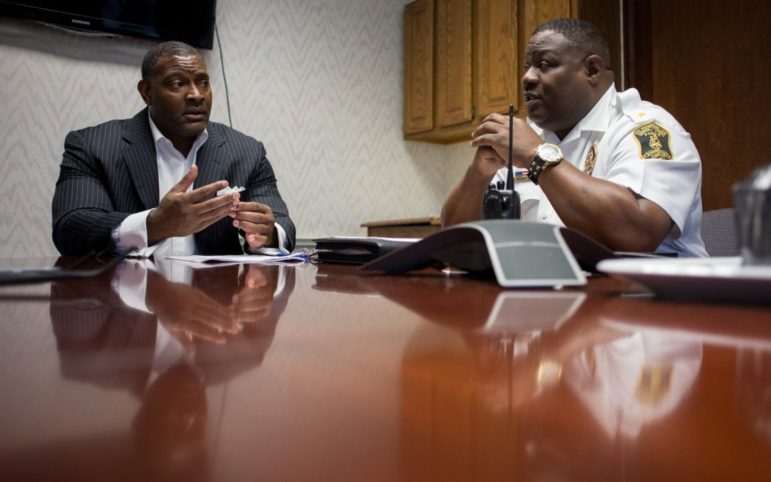 Nina Esposito-Visgitis, president of the Pittsburgh Federation of Teachers, said she does not want to see school officers removed, “because I’ve seen the terrific work they have done. ... And I know the valuable resource they are.”

In response to inquiries from PublicSource about calls to remove school police, district spokeswoman Ebony Pugh deferred to Board President Sylvia Wilson. Wilson did not respond to multiple requests for comment.

Advocacy groups such as the American Civil Liberties Union of Pennsylvania and some Pittsburgh parents have already been calling on PPS leaders for years to remove the police presence from schools and instead invest money in additional resources for students and schools, such as counselors, social workers and mental health professionals.

“The presence of police in schools does not make students safer,” wrote Sizemore, a professor at Duquesne University where she leads the Juvenile Defender Clinic, in a written call for PPS to remove police.

“It increases the number of students who are entering the juvenile and criminal legal systems in this country,” the letter continued. “Once students enter these courts systems, they are more likely to drop out of school and more likely to have another contact with these courts.”

Pittsburgh’s high schools have a resident officer, and in the 2019-2020 school year, the school safety department budget was nearly $7.3 million. The department includes police officers and security.

In 2019, there were 623 youth ages 10 to 17 arrested by police in Pittsburgh, including school and city police. According to the American Civil Liberties Union of Pennsylvania, 84% of those arrested were Black youth.

Additional arrest data being analyzed by the ACLU suggests that between a third and a half of juvenile arrests are school-related in Pittsburgh, according to Harold Jordan, a senior policy advocate at the ACLU-PA, where he leads school-to-prison pipeline and equity work. Jordan said Pittsburgh has long had high out-of-school suspension, arrest and citation rates, especially for Black students, relative to the rest of the state and country.

In December, it was reported that some Pittsburgh Public Schools were among the top 25 schools for arrests across Pennsylvania. Those schools include: Westinghouse Academy, Brashear High School, Carrick High School, Perry High School and Oliver High School.

A 2017 PublicSource analysis of school police records obtained through a Right-to-Know request found that Pittsburgh school police filed charges 3,400 times for cases on school grounds in the prior four years. Eighty percent of the time, charges were filed against Black students.

A 2015 study by ACLU-PA about discipline and policing in Pennsylvania public schools, Beyond Zero Tolerance, found that “as schools increased their use of police officers, the reported number of crimes involving non-serious violent offenses that are reported to law enforcement increases.”

The ACLU-PA has worked alongside a handful of local advocacy groups for about three years to push for a removal of police from schools. Their hope, Jordan said, is to eliminate “the harm that goes with having police being overused in schools,” including to reduce harmful arrests, reduce summary citations and hire student support staff not tied to the justice system, such as counselors or psychologists.

PPS is also required by state law to have a formal working agreement outlining its relationship with city police, though it’s been without an agreement since 2011. Since the summer of 2018, a memorandum of understanding between Pittsburgh Public Schools and city police has been in the works, undergoing revisions after feedback about policing from board members, advocacy and student groups and the community. A key part of the controversy was whether city police would be authorized to make arrests on campus for off-campus or past offenses. City officers are sometimes called by school staff or school officers, at their discretion. 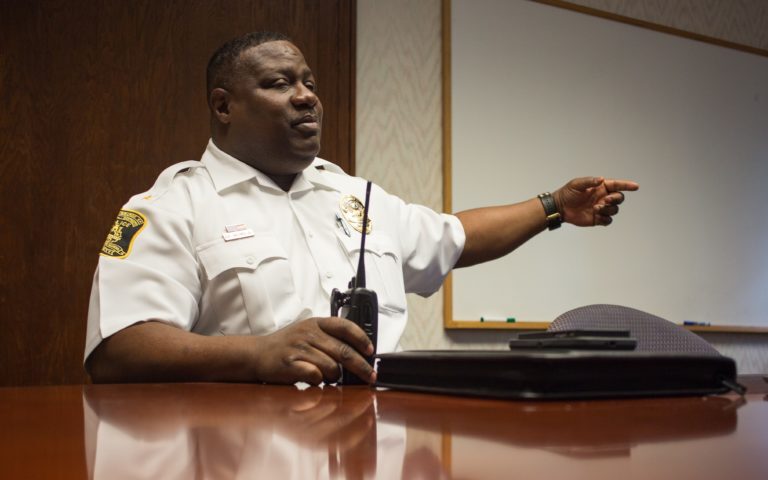 Throughout the conversation about arming school police in 2018, Brown argued that school police officers should be armed to protect students and staff from dangerous intruders who could make their way into the schools and said students had shown up at school and football games with weapons.

“Let’s pray nothing happens,” Brown said after the vote that rejected the proposal to arm the officers.

Kathi Elliott, who leads Gwen’s Girls, a nonprofit advocacy organization for at-risk young women and girls, echoed Jordan’s thoughts on the negative consequences of policing.
“Not only are our kids having to deal with what’s happening in the community,” she said, “but when they walk into a school every day and [are] faced with the same type of over-policing, it is just as traumatic and just as unfair and unjust as the things that we are seeing play out before our eyes, videotaped.”

Elliott was one of 55 Black women to sign a letter sent to the PPS board of directors on June 1, which asked the board not to renew the contract of Superintendent Anthony Hamlet. The high rate of Black students’ referrals to the police made the letter’s list of reasons to not renew. Hamlet agreed to a five-year contract in 2016 to expire next June. The board must decide on whether to renew Hamlet’s contract by Feb. 1, 2021.

Read the letter from Black Women for a Better Education opposing a renewal to Hamlet's contract.

“Many of us have had conversations, have been having meetings, have been in dialogue with the district,” Elliott said. “I just don’t see where the change has been or where it’s going under this leadership.”

While the idea of police-free schools is getting attention lately, Pittsburgh attorney Cheryl Kleiman of the Education Law Center said these are just strides in a long-term movement.

“We have this moment right now that if we listen to students, if we listen to communities … we may be able to make significant strides towards our vision for police-free schools,” Kleiman said. “At the same time, this moment and movement is not new, but one that has been driven by Black and brown students and their supporters for a very long time.”

Sizemore agreed, calling on public school leaders to seize this moment, because this is the chance “for people who have been saying they want change to do something meaningful.”