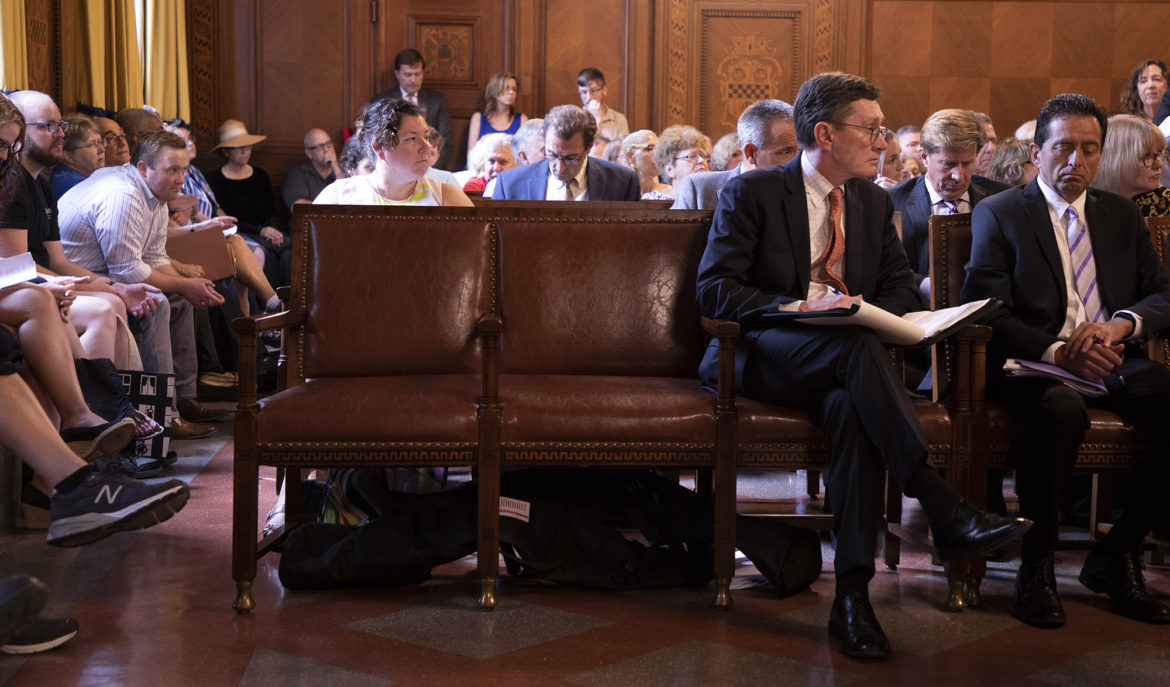 UPMC executives listen to testimonies for and against UPMC's proposed plan during a hearing at the City-County Building on Tuesday. (Photo by Kat Procyk/PublicSource)

Pittsburgh City Council's hearing on UPMC’s $2 billion expansion plan, which had 160 speakers registered and more in attendance, adjourned on Tuesday after four hours with no vote.

Council president Bruce Kraus and the majority of council members said they would not support UPMC’s plan until there was a community benefits agreement [CBA] in place.

The public hearing followed a meeting held on Monday at the Duquesne University Power Center about UPMC’s plans to build an eye care center in Uptown.

Following are some of the scenes from the two meetings and details about UPMC’s plan.

Hill District resident Glenn Grayson Jr., 32, is a father of two. He needs glasses and worries about finding affordable health care for his family. In hopes of getting those needs addressed, he attended an impromptu July 16 meeting at the Duquesne University Power Center. 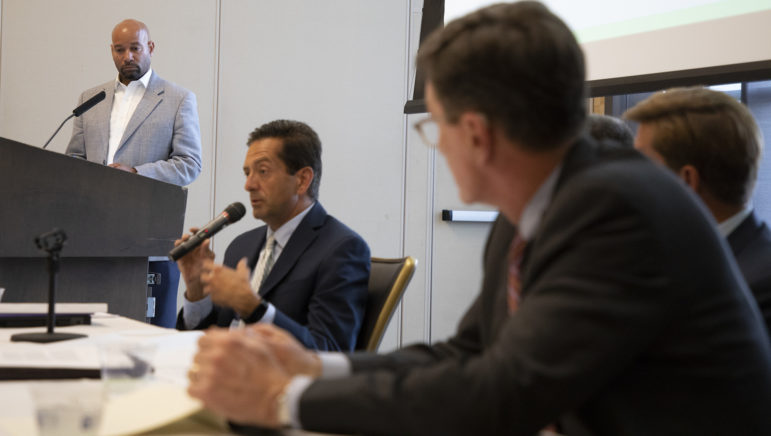 Grayson asked the panel if he would be able to receive affordable care at UPMC’s new facility as a Highmark insurance customer.

Peaslee replied that if Grayson wanted affordable treatment at UPMC Mercy and the new facility, he should get new insurance. “If you want in-network access to UPMC services, you can buy Aetna, Cigna, United, any of those,” Peaslee said.

Residents also raised concerns about UPMC’s practices that went beyond the eye care center. Grayson pressed the panel about racial disparities in UPMC’s hiring practices. As an example, he pointed out that black people are statistically underrepresented among UPMC’s nurses and accused UPMC of primarily hiring black people “to clean and cook.”

Peaslee told him that black people are underrepresented among UPMC’s nurses because they aren’t going to school for nursing. 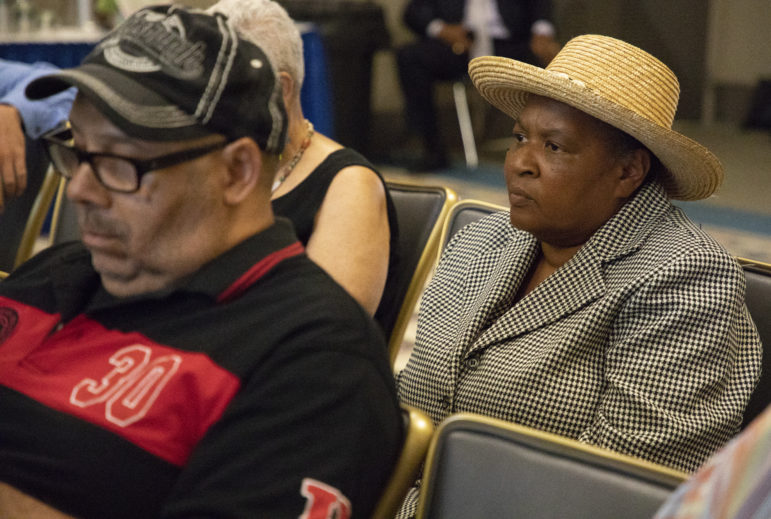 A few dozen people attended the July 16 meeting at the Duquesne University Power Center. The meeting took place the night before a Pittsburgh City Council held a hearing about UPMC’s planned expansion. (Photo by Kat Procyk/PublicSource)

In regards to insurance and affordability, Lavelle added, “If you don’t have Highmark at the table, you can’t really have a discussion.” UPMC will split from Highmark next year, meaning that adult Highmark patients receiving services from UPMC will find those services to be out of network. UPMC Children’s Hospital will be out of network for Highmark customers starting in 2021. The split has been a source of consternation for Highmark patients, who now find their in-network care options in Pittsburgh significantly reduced.

More health care in Uptown—but for whom?

UPMC announced a $2 billion expansion in November of last year. Of that, $400 million will go to the new eye care center in Uptown. If approved, the new facility will be constructed on a vacant parking lot on UPMC Mercy’s campus.

Previously, UPMC proposed making that same parking lot into a power plant for the UPMC Mercy facility. The city approved the power plant in 2012 as a part of UPMC’s Institutional Master Plan [IMP] for the existing campus. Now that UPMC has proposed an eye care center instead of the power plant, the city will need to approve the revised plan. The IMP was approved for 10 years, and the update—that is, the new eye care center—will be completed within the timeframe of the original 10-year plan.

Michael Grace, president of UPMC Mercy Hospital, addresses the city council at a hearing on July 17 at the City-County building to get approval for a UPMC vision center in Uptown. (Photo by Kat Procyk/PublicSource)

During the July 17 meeting some advocates wanted a guarantee in writing that UPMC will provide certain benefits for the local community and have repeatedly asked the city council to reject UPMC’s application unless it includes a CBA. And that’s exactly what most of the city council members agreed to do by withholding the approval for UPMC’s expansion plan until the CBA is in place.

The agreement may include benefits like funding for grocery stores or playgrounds or hiring quotas for neighborhoods where residents are at risk of displacement.

Jeanne McNutt, executive director of Uptown Partners of Pittsburgh, a community development nonprofit, has watched the UPMC Mercy expansion evolve as it went through approval by the zoning board and planning commission. McNutt moved to Uptown in 2007 and founded Uptown Partners that same year. She started working in development because of the outrage she felt as she watched land speculators tear down houses to create parking lots in Uptown. She wanted to put a stop to it. 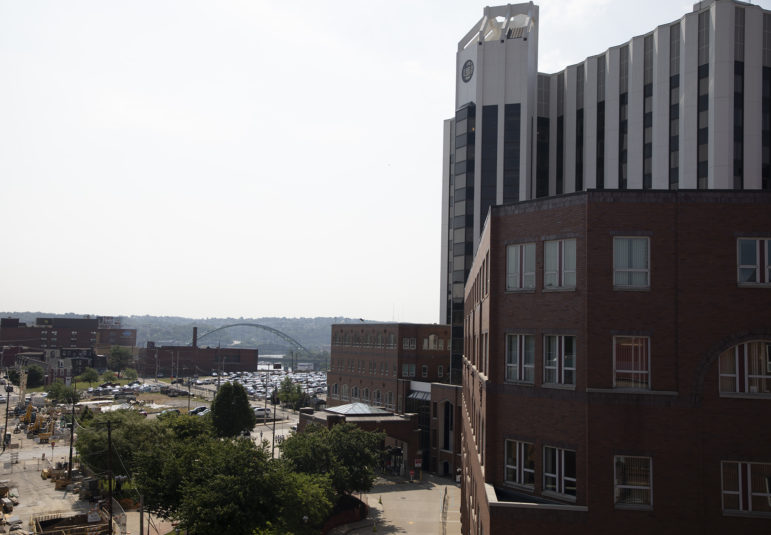 Whenever there is a major development in their neighborhood, McNutt said, Uptown Partners is assessing whether there is a community benefit. According to McNutt, her organization has already persuaded UPMC to provide off-street parking in a garage below the eye care facility and a community space for Uptown residents.

McNutt said that many of the people who came to speak out at the zoning board and planning commission against UPMC were not Uptown residents.

In reaction to city council’s decision on Tuesday, Jennifer Rafanan Kennedy, executive director of Pittsburgh United, wrote in a statement:

“Today the people of Pittsburgh spoke with a unified voice: UPMC, our largest charity, employer and landowner, must address the needs of the community if it wants to keep building hospitals in this city… A community benefits agreement is about nothing less than the people of this city demanding to be invisible no more.”

UPMC is the largest non-governmental employer in Pennsylvania. Who do they serve?

Louis Berry III was born and raised in Braddock. He worked in housekeeping at UPMC for more than 11 years before getting injured on the job and winning a settlement. Berry’s voice is deep and booming.

He remembers the day his career at UPMC changed. While lifting a heavy trash bag, he tore an ACL, a rotator cuff and a bicep tendon. “My shoulder just went kind of dead after that,” he said. After 11 years on the job at UPMC, Berry retired making $13.25 an hour. 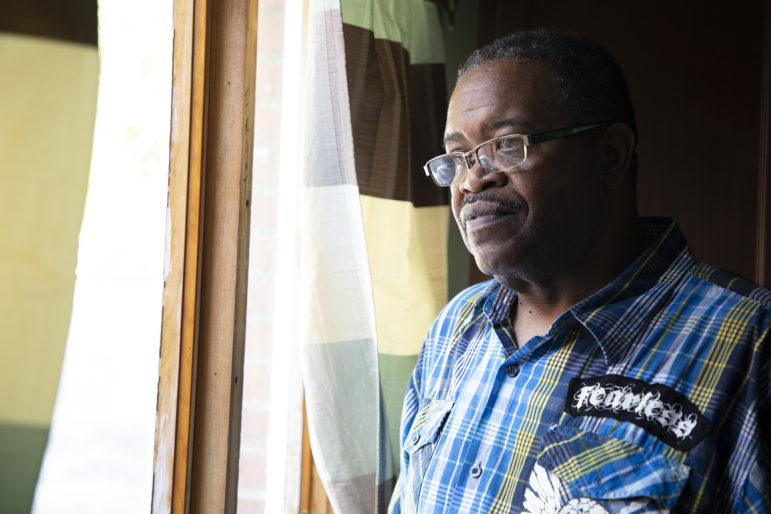 Louis Berry III poses for a portrait in his Braddock home. Berry is a former employee of UPMC. (Photo by Kat Procyk/PublicSource)

Berry is affiliated with Hospital Workers Rising and Service Employees International Union. Although he no longer works at UPMC, he would still like to see the nonprofit change: “I will always fight to make sure UPMC does the right thing by my ex-coworkers and future generations. It’s just something I will always do – until they do the right thing. That’s just part of who I am,” he said.

At the Monday discussion, Pittsburghers from Uptown, the Hill, Braddock and other neighborhoods voiced their opinions. Many didn't see an eye care center as beneficial to the community. With the opioid crisis continuing to gain momentum, high infant mortality rates and high asthma rates affecting the Pittsburgh region, many asked why UPMC is investing $400 million into this facility. Why an eye care center? Why now?

The attendees also took the meeting as an opportunity to raise other concerns about UPMC’s practices.

UPMC’s facilities are publicly subsidized, in the sense that the organization does not have to pay taxes on their land. Berry argued that because of this, local residents should have affordable access to UPMC healthcare regardless of what insurance card they carry. He sees this series of meetings and hearings as an unprecedented opportunity.

“This is essentially the first time in my eight years [of organizing] that UPMC actually needs permission from the public and from council to do something they want to do,” Berry said. “Normally under ordinary conditions, they would just go ahead and do what they wanted [to] do.”

Although Berry isn’t an Uptown resident, he hopes the city will take advantage of the approval process to demand several changes in UPMC’s policies, including increases to UPMC workers’ wages, better health benefits for employees and an end to the organization’s feud with Highmark.

Lisa Sayre, a registered nurse for UPMC, also attended the Monday meeting. She has worked for UPMC for five years. She first came to Pittsburgh in 2007 to obtain a degree from Pittsburgh Theological Seminary.

“I love being a nurse," she said. "It’s one of the things that makes me feel most alive as a person. I don’t know how much background in Christianity you have, but we have this story about Jesus washing the disciples’ feet and they’re aren’t a lot of places in the world where you can wash feet for a living.” 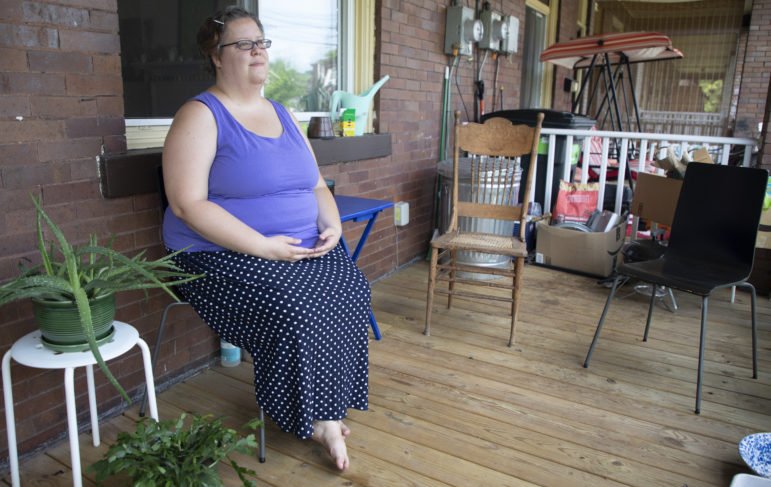 Lisa Sayre poses for a portrait on the front porch of her home in Swissvale. Sayre is a registered nurse for UPMC and works in home health care. (Photo by Kat Procyk/PublicSource)

Sayre started her health care career as a nursing assistant and then attended nursing school at Mercy Hospital. Now she works as a UPMC home health nurse, which includes hospice care.

“I get to see so much of life and death ... especially now as a home health nurse,” she continued. “How beautiful and strong and resilient and funny [people are]. And it’s hard because it’s never a happy thing to have a nurse.”

Sayre said she did not feel her job as a nursing assistant was secure enough for her to speak out against some of UPMC’s practices, but when she became an RN, she began to organize. She sees this as her duty not only for her fellow co-workers but also for her patients. She’s also vocal about her involvement with Service Employees International Union, something she said many UPMC employees are afraid to do for fear of retaliation. She spoke on June 16 and 17, advocating for UPMC workers and patients.

Sayre echoed Berry’s concerns about fair wages. She’d also like to see the minimum wage reach $15. Peaslee said in a 2014 interview with The New York Times that UPMC’s wages are fair and an increase to $15 per hour is “not realistic.”

“UPMC is our city’s largest employer, so they have this impact on the economy of the entire city,” she said.

Sister Carolyn Schallenberger has worked at UPMC Mercy since 1959. She told city council on Tuesday that when the hospital started, there were only 60 beds. 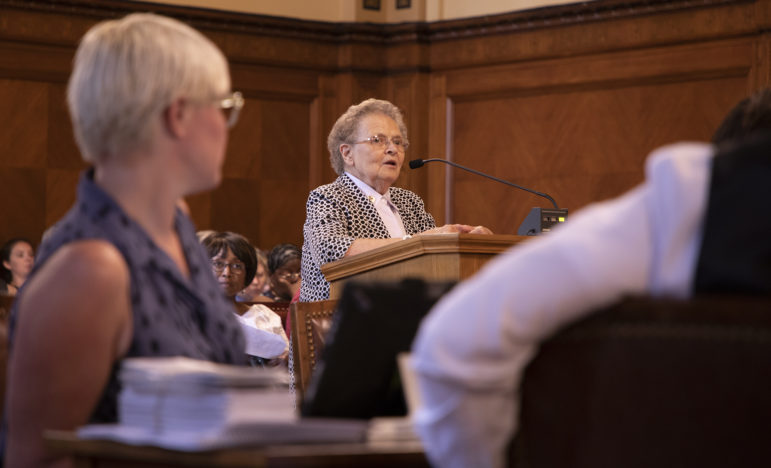 Sister Carolyn Schallenberger testified in support of UPMC at a hearing before the city council on July 17. She credits UPMC for saving the Sisters of Mercy. (Photo by Kat Procyk/PublicSource)

She said UPMC Mercy has been challenged by city council every time they seek to expand or build. “If we had been held back from building, you wouldn’t see what we have today,” she said.

Schallenberger credited UPMC with saving her congregation, the Sisters of Mercy and their 160-year legacy.

McNutt of Uptown Partners said her big concern for the project now is if it will provide jobs provided for people locally. Will her neighbors be hired?

UPMC has touted the construction jobs that the eye center will create. However, McNutt had something else in mind: long-term health care jobs in the eye care facility itself. “And I wasn’t thinking as much about construction because there are a lot of folks in my neighborhood who aren’t certified.”

She hopes for “any kind of jobs to create wealth and some kind of financial security for the neighbors.”