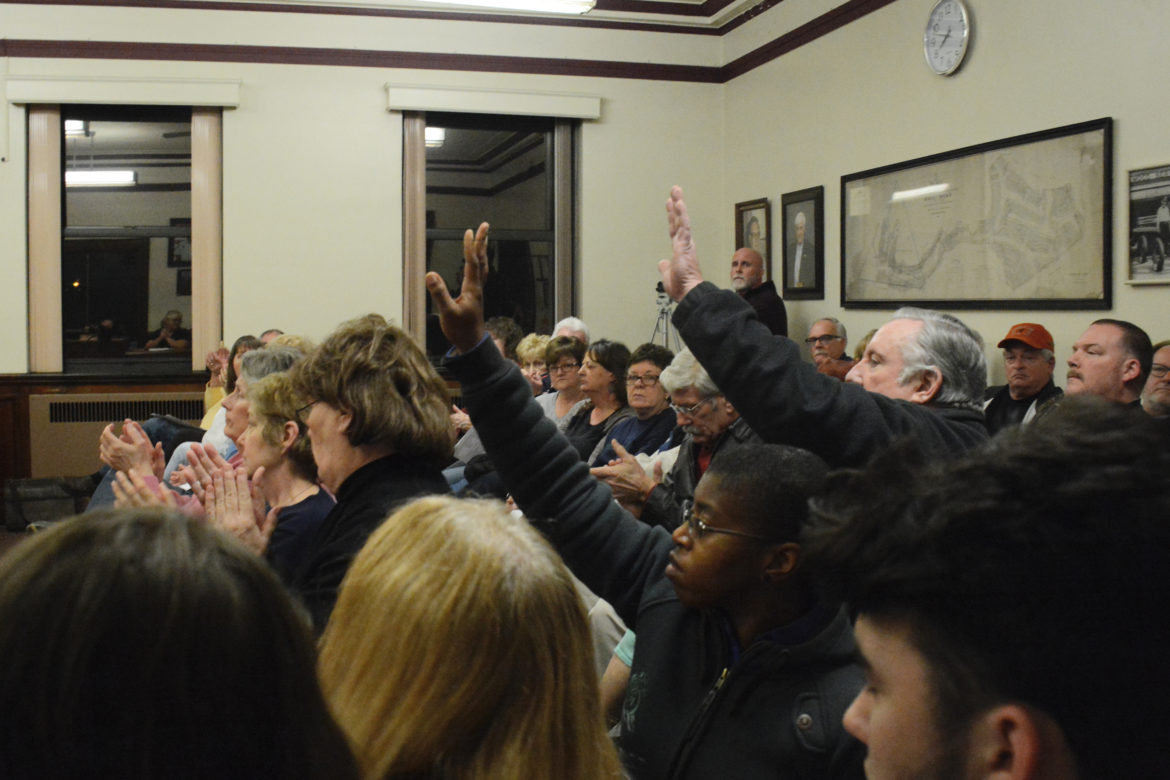 Nearly 50 people crammed into the Munhall borough's council meeting Wednesday night to hear the elected officials debate the sale of 7 acres of land to a private company. Council unanimously tabled the bill to sell. (Photo by Stephen Caruso/PublicSource)

The pressure of the crowd at the Munhall Borough Council meeting on Wednesday evening appears to have altered the fate of a 7-acre parcel near The Waterfront.

The council was poised to make a decision on selling the land they had gained through eminent domain, with the promise of making it a park. But by the end of the two-and-a-half hour meeting, its members voted unanimously to table a motion to sell and move forward with seeking funds to transform the property into a public park.

“We’re very pleased and looking forward to starting to find a niche for the property down there, and I hope council members will work with me,” Brennan said after the meeting.

Citizens engaged in a spirited back and forth with the borough’s elected officials, often referencing PublicSource’s reporting on the proposed sale.

The former mill town along the Monongahela originally acquired the land in December 2016, using eminent domain to take over the land from a struggling nonprofit. The eminent domain petition stated that the borough intended to use the land as a public park. 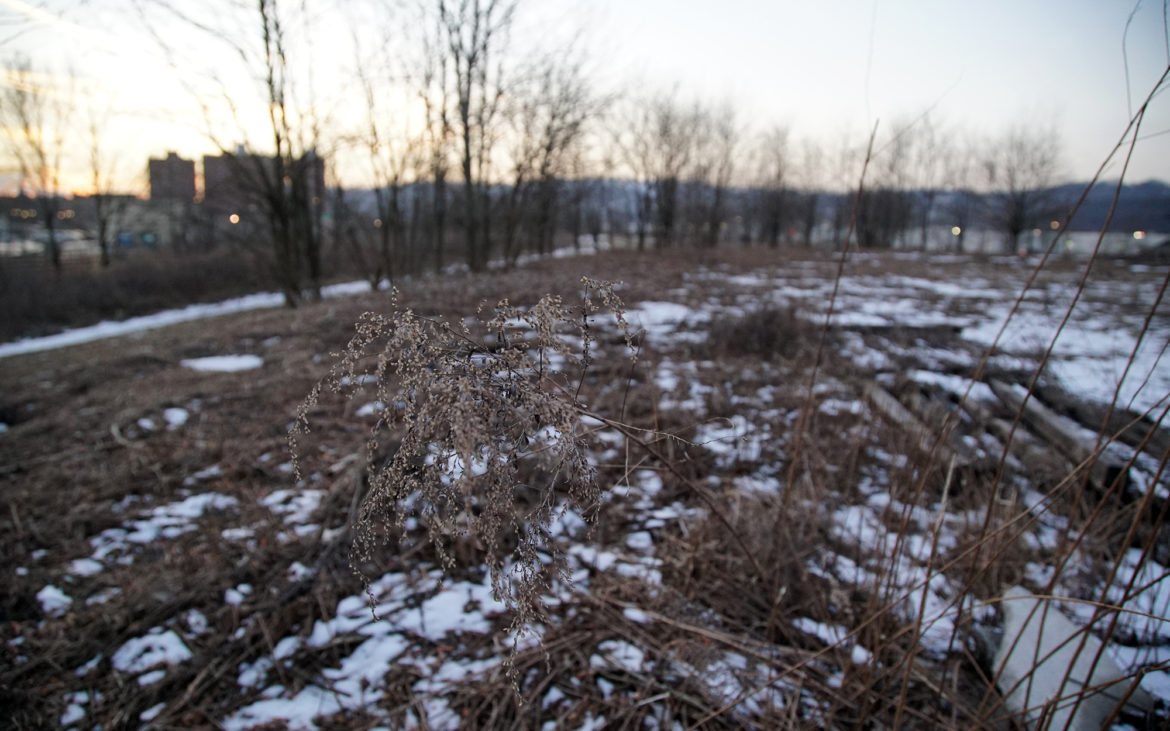 Munhall Borough owns this undeveloped land in The Waterfront area. The borough seized it through eminent domain, claiming it would create a public park, and then put it up for sale. (Photo by Ryan Loew/PublicSource)

However, a private company known as Franjo Construction made an unsolicited offer to buy the land for $75,000 from Munhall in August 2017. Allegheny County assessors last estimated the land’s value at $275,000.

As the borough had not officially listed the land as for sale, it could not accept the offer. But in the fall, council voted to post legal notice that the land was up for sale. In December, the borough received one bid for $125,000 from a company called JLFL RE Holdings, LLC. Four of the six council members previously expressed the belief that the company was associated with Franjo because the new company matched the initials of the Franjo owners.

After a few minor matters at Wednesday’s meeting, Brennan opened discussion on the parcel — adjacent to The Waterfront development of retailers and restaurants — by explaining to council the work he’d done over the past month to apply for grants and find partners to transform the overgrown lot into a park.

Brennan told the crowd that the idea of selling the land and the council’s consideration of a bid below market value was “disappointing” and a waste of time.

Many in attendance agreed, saying they thought the sale was rushed if council was willing to accept a $125,000 bid. To counter, some in the crowd threw out numbers ranging from $250,000 into the millions as the price worth selling at.

Matt Flaherty was one such speaker. A real estate agent himself, he said he first learned about the sale through PublicSource’s reporting in January. Speaking to council, he said he was concerned that they weren’t being diligent in weighing how a public park could attract more attention to the borough.

“It just doesn't make sense,” Flaherty told council. “Nobody walking the streets of Munhall would go for that deal.”

The crowd then goaded members of council in favor of the sale to stand up and speak for themselves, at which point Councilman Jason Stein rose.

As Stein thanked the crowd for showing up, and commented that there was no such crowd for the original vote, he was cut off by sarcastic jeers from the crowd.

“I didn't interrupt you,” he shot back. 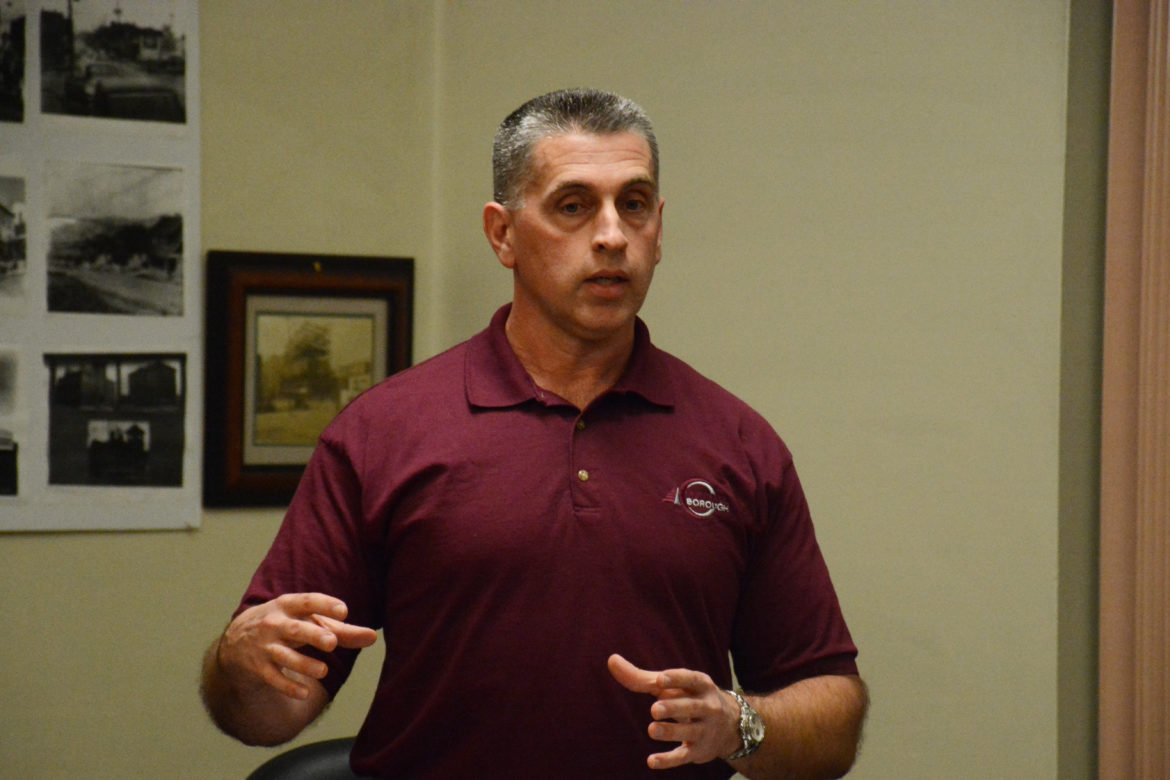 Munhall Borough Councilman Jason Stein was the first to address the crowd about his support for the sale. Council President Robert Falce had to ask the crowd to quit interrupting him. (Photo by Stephen Caruso/PublicSource)

Stein said he had concerns the property wasn’t as valuable as the crowd believed, considering the council only received the one bid.

“A property is only worth what someone is willing to pay for it,” he said.

Stein added that the borough is not in the business of holding onto property, and that it would be better to turn over the land to a company that will pay taxes to the borough.

Talk of the money at play led one crowd member to ask Munhall Solicitor Greg Evashavik what the final gain for the borough would be from the proposed sale price of $125,000.

Evashavik responded that, minus tax liens Munhall would have to pay to the county and schools if it sold the land rather than keep it, the borough would gain about $42,000.

Many in the crowd appeared shocked at the projected profit. One joked aloud, “$40,000? I’ll give you that.”

Council President Robert Falce voiced his favor of holding onto the land to explore the possibilities of a park. As public comment wound down, an opinion emerged — why vote on the sale now?

“That’s up to a member of council to make a motion to table it,” Falce said.

Brennan made his final plea to council to keep the land.

After he finished, there were a few seconds of silence. Then Councilman J. “Putts” Petruzzi rose and motioned to table the bill to sell. Another member seconded it. The room exploded in applause.

Even though four members expressed support of the sale during the meeting, council ended up with a unanimous vote to table the sale.

After the meeting, Stein said the crowd’s reaction caused him to change his vote.

“This crowd seemed fixated only on the money we’d get for the site,” Stein said. “That seemed shortsighted, but I didn’t feel like falling on my sword.”

He added that, going forward, he expected council and the mayor to cooperate on the project because “we’d be foolish not to.”

Correction (2/23/2018): A previous version of this story included an unclear characterization of Munhall Council President Robert Falce's role in the vote regarding the 7-acre parcel. It has been clarified.

Stephen Caruso is a Pittsburgh-based journalist who covers government and politics at The PLS Reporter, an online news outlet focused on Pennsylvania state and local topics. He also freelances. Reach Stephen at stephencaruso23@gmail.com or follow him on Twitter @StephenJ_Caruso.