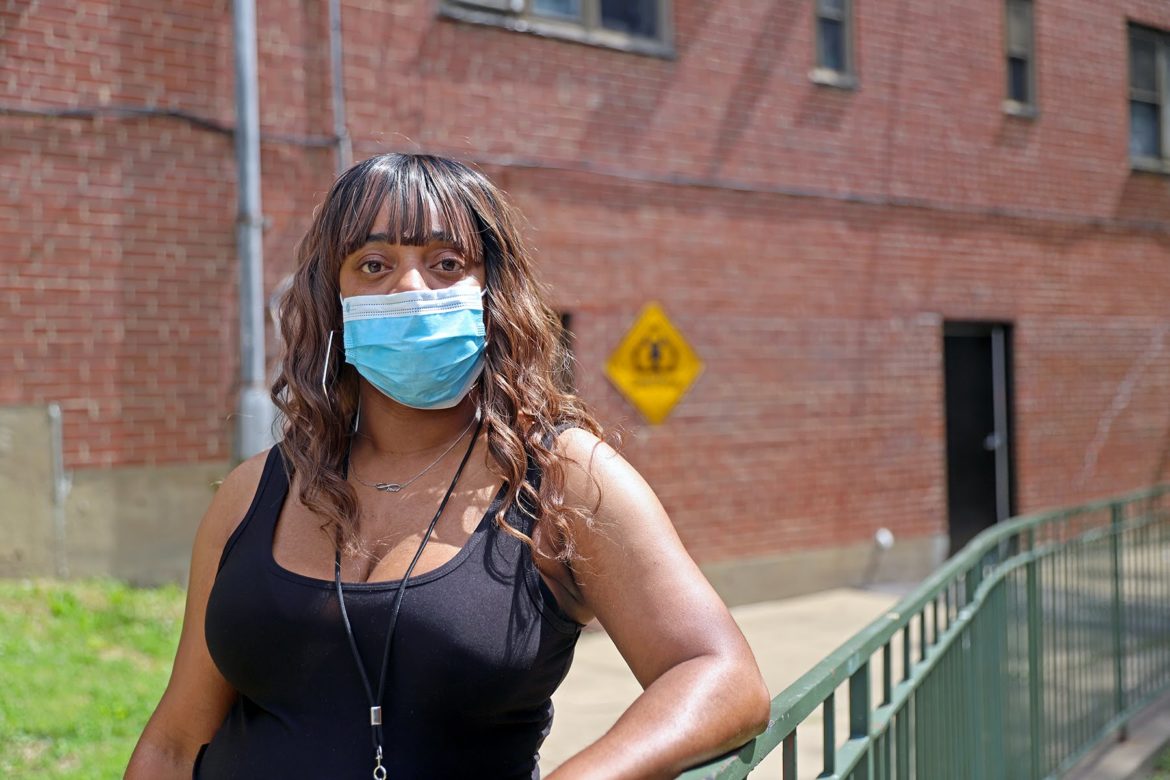 Jala Rucker of the Pittsburgh Union for Regional Renters in Allegheny Dwellings housing where she was working Friday, May 29. (photo by Jay Manning/PublicSource)

Frozen since March 16, more than 400 eviction cases in Allegheny County are set to resume Tuesday in the first of a series of steps toward normal landlord-tenant court activity.

Orders by county President Judge Kim Berkeley Clark had stalled all eviction actions in light of the public health effects of the coronavirus. But on Thursday, the judge issued an order confirming the planned June 2 resumption of action on already-filed eviction cases. That means stopped clocks will start ticking again toward the hearings and decisions required under the state’s Landlord and Tenant Act, and potentially toward the ouster of residents from apartments and rental houses.

Another related milestone has some civic leaders and advocates scrambling for alternatives to the existing eviction system. Gov. Tom Wolf’s moratorium on new eviction and foreclosure filings runs through July 10. No one claims to know what will happen when nearly four months of pent-up landlord-tenant tension is released at a time when the statewide unemployment rate has already topped 15%.

"I'd like to be optimistic and say, no, [landlords] are not waiting to evict," said Megan Stanley, director of the Pittsburgh Commission on Human Relations, and a member of an informal working group convened by the *Pittsburgh Foundation to address eviction. But data from years past, she notes, suggests that the county "could be looking easily at thousands of eviction filings" this summer.

Some are hoping that a potential crisis could create an opportunity to improve a system that is tough on both tenants and landlords. Pittsburgh Foundation Senior Program Officer Jane Downing is floating to courts, state lawmakers and local governments a five-point plan to reduce evictions. An effective response, though, depends on funding, and so far, the amounts allocated don’t come close to matching estimated needs.

If the moratorium expires with no safety net in place, warned Carol Hardeman, co-director of the Hill District Consensus Group, “Well, then Allegheny County is just going to have a lot more homeless people.”

"They can’t wash their hands, they can’t keep up with their hygiene," she added. "And plus just the anxiety in it. We’ll have more people sick — not from the COVID, but just from the stress of it.”

“This eviction thing,” she said, “is just as scary as the COVID.”

Is there a tidal wave coming?

Even in normal times, a typical month in Allegheny County brings more than 1,000 new eviction filings.

An analysis by the Pittsburgh Foundation shows that since 2012, Allegheny County has seen between 13,063 and 14,182 eviction filings each year. The vast majority involve rentals charging under $1,000 a month. Landlords win the power to evict in 85% of the cases. Most of the rest end in settlements, and tenants fully prevail just 1.5% of the time. 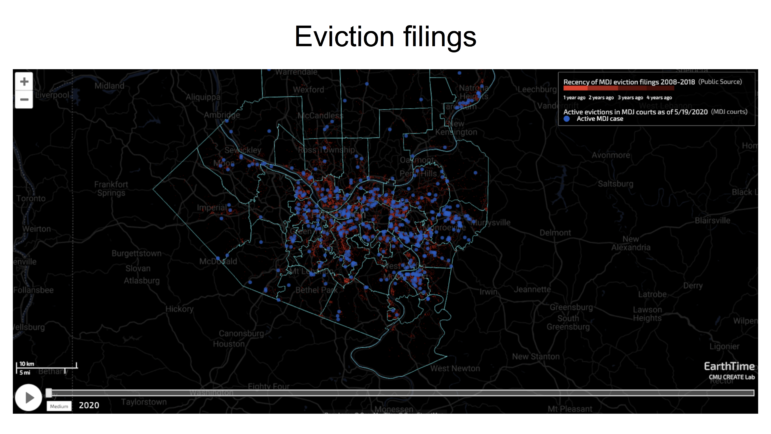 A map by the CMU Create Lab shows the approximate locations of units for which currently active eviction cases are filed (in blue) over top of PublicSource’s data on a decade of eviction cases. (Courtesy of CREATE Lab)

For tenants, eviction can often result in further career and educational setbacks, downgrades in living conditions, mental health issues and the creation of a court record that will follow them forever, said Downing, who leads the foundation’s economic and community development efforts and has been focused on tenant issues since 2017. And even when landlords win, they are often out thousands of dollars of lost rent, plus court costs.

Landlords are reporting that their rent receipts "are not catastrophic at this point — at this point," said Jim Eichenlaub, executive director of the Apartment Association of Metropolitan Pittsburgh. He speculated that enhanced unemployment compensation payments could be helping many out-of-work tenants to keep up with the rent. (The $600-a-week federal boost to unemployment payments, though, is set to expire July 31.)

"What happens when this additional unemployment runs out?” Eichenlaub said. “That could be another story."

If incomes ultimately drop by 10% or 20%, a wide gap will open between rents and many tenants' ability to pay, according to Ira Goldstein, president for policy solutions at the Philadelphia-based Reinvestment Fund. Using data from the Census Bureau and other sources, he estimated that the shortfall between rents, and what renters can reasonably afford to pay, would rise by $39 million to $77 million per month statewide. That extrapolates, over six months, to a need of $234 million to $462 million in need statewide, including $24 million to $48 million in Allegheny County.

Even if the economy was normal, the July expiration of what will be 16 weeks of moratoriums on new evictions would likely undam enough landlord-tenant cases to swamp the Magisterial District Judge court system. The number of cases would rapidly build from the current 479 cases to some 3,000 active cases by mid-autumn, according to an analysis by Carnegie Mellon University's Community Robotics, Education and Technology Empowerment [CREATE] Lab. 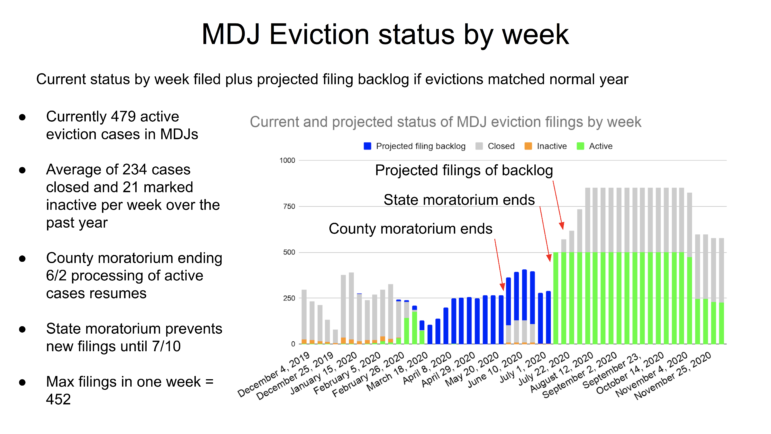 A graphic depiction of the CMU CREATE Lab’s analysis suggesting that the end of the moratorium on new evictions could leave the Magisterial District Judge landlord-tenant court system “overwhelmed.” (Courtesy of CREATE Lab)

"If we don't get rental assistance and mortgage assistance together,” he said, “we're going to see a tidal wave of evictions and foreclosures starting in July, and we'll see landlords going under.”

"There has to be a coming together of minds over the next two or three weeks about the actual allocations,” Downing said Wednesday. There are emerging plans to reduce evictions, and there are potential sources of funding. The plans and the money, though, don’t yet line up.

Downing said her working group — which includes leaders of foundations, government departments, housing authorities, courts and a few landlords — has reached consensus on a number of proposals.

Jala Rucker, a volunteer leader of the Pittsburgh Union of Regional Renters, counsels tenants  facing eviction. She said existing programs require that they dig up documents from their employers and state or federal agencies that may be hard to find and even harder to replace during a period in which many offices remain closed. “It’s just a lot of barriers out here that families have been facing," she said.

She said she's been involved in the working group discussions and that "they are taking it seriously. … But I feel like we need to be at a 10 or above in terms of taking this seriously.”

"I don't think you can overstate the urgency of this issue,” agreed Stanley. "We need to have something ready to go to respond to this when the courts open [to new evictions], under the governor's order."

Lots of CARES — but maybe not enough

The biggest available funding sources are the federal Coronavirus Aid, Relief and Economic Security [CARES] Act allocations of $3.9 billion to the state and $212 million to Allegheny County.

Late Thursday, the General Assembly passed a bill steering $175 million of the state's haul to the Pennsylvania Housing Finance Agency [PHFA] for "mortgage and rental assistance."

"With that substantial amount, there's still not going to be enough,” state Rep. Sara Innamorato, D-Lawrenceville, who has been involved in Downing’s working group. She cited estimates circulating in the House that PHFA needs about $475 million to help struggling renters and homeowners.

Counties and cities may have to find money to address housing problems, she said. "There's more work to be done, especially if there's a second wave [of coronavirus] that comes in the fall."

Allegheny County Executive Rich Fitzgerald said Friday that the county had not yet finished plans for spending the CARES money, but did not rule out using some of it to support residents' housing needs. The money must be spent by year's end.

PHFA this month floated a rental assistance program draft plan that would steer funds to the landlords of tenants who lost income due to the pandemic economy. Landlords receiving funds would have to agree not to evict those tenants this year, to keep units in good order and not to raise affected tenants’ rents.

"Assisting renters that are facing pandemic-related loss of income is absolutely critical,” said Bryce Maretzki, PHFA’s director of strategic planning and policy. “Some of them are the most vulnerable and the most at-risk [residents], and so we are all scrambling to try to make sure that renters, as well as homeowners ... aren't put on the street or end up in the homeless system. That would be a horrible outcome."