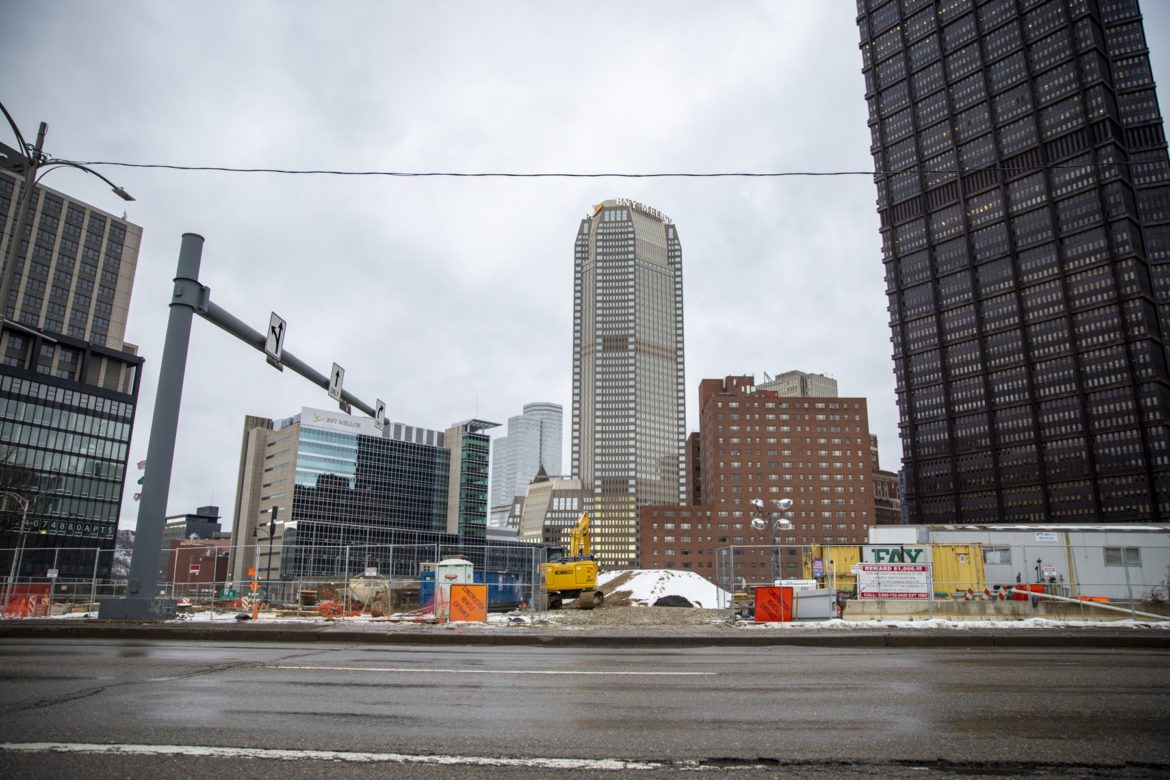 View of Downtown Pittsburgh from near the site of the former Civic Arena, where the Penguins are leading a redevelopment effort, in February 2021. (Photo by Jay Manning/PublicSource)

Update (3/1/2021): Mayor Bill Peduto's administration on Feb. 28 released to PublicSource a March 4, 2019 letter from the mayor to Gov. Tom Wolf, expressing support for a plan "to petition the Internal Revenue Service" to make the former Civic Arena site part of the Hill District Opportunity Zone. "The Lower Hill site is critically linked to the adjacent Opportunity Zone, and its inclusion within the Opportunity Zone is necessary for revitalization of the Greater Hill District," according to the letter.

Federal Opportunity Zones include 8,760 census tracts chosen according to economic distress. The letter does not specifically ask for a change in census tract boundaries, which ultimately occurred in February 2021, and had the effect of making the arena site eligible for Opportunity Zone financing.

Fragile relations between the Pittsburgh Penguins’ development team and some Hill District advocates have become even more fraught this month thanks to the redrawing of a census tract boundary, which comes just weeks from potentially pivotal public meetings about the site of the former Civic Arena.

Census tracts are geographical units that are supposed to include 1,200 to 8,000 people — ideally around 4,000 — and that form the basis of some federal funding decisions.

The U.S. Census Bureau reviews tract boundaries every 10 years before releasing data from the decennial census. While many changes are driven by the desire for relatively uniform tract populations, input from states is considered.

The former Civic Arena site had been, for decades, part of the Downtown tract. The bureau’s decennial redrawing of Pennsylvania’s tract boundaries, released Feb. 2, instead put the 28-acre site in with the Crawford-Roberts section of the Hill District.

The shift could bring more development funding to the Penguins-related team of Pittsburgh Arena Real Estate Redevelopment LP and developer Buccini/Pollin Group, which is trying to pull off a $1 billion redevelopment of the arena site.

Penguins Chief Operating Officer and General Counsel Kevin Acklin wrote in a Monday email to PublicSource that the redrawn line makes it possible to include the site in a tract-based federal Opportunity Zone. There are 8,760 tracts with that designation, including the Crawford-Roberts tract. Private companies can get tax breaks by making investments within their boundaries.

Acklin wrote that he’s not yet sure how inclusion in an Opportunity Zone will affect the arena site redevelopment but added that he believed any benefits would help the whole area. 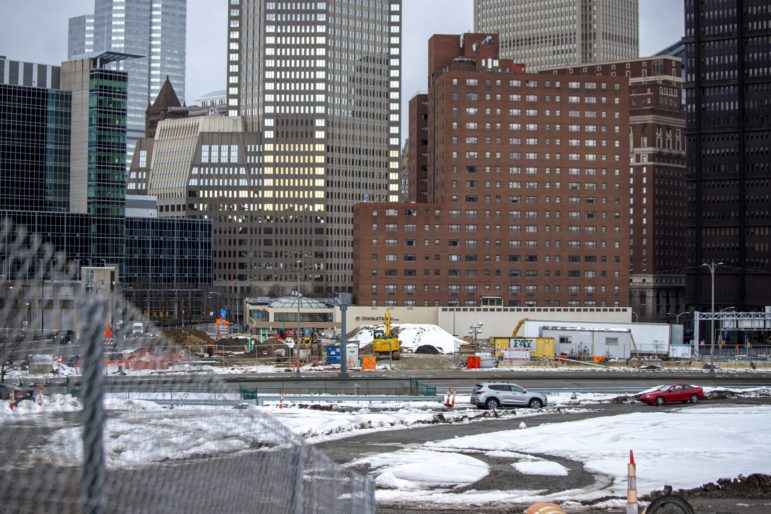 View of Downtown Pittsburgh and part of the site of the former Civic Arena, where the Penguins are leading a redevelopment effort, in February 2021. (Photo by Jay Manning/PublicSource)

"Opportunity Zone designation for the Lower Hill will help attract equity investment for the entire Hill District Opportunity Zone to help support projects in the middle and upper Hill District," Acklin wrote. "Opportunity Zones need investments of significant scale to be successful and worth the complicated tax and legal structure," and including the arena redevelopment project could make the math work for the whole neighborhood.

But at what cost?

Leaders of the Hill Community Development Corp., though, worry that the shift could cost the neighborhood in the long term.

Census tract demographics determine neighborhood eligibility for federal Community Development Block Grant [CDBG] funds. The city this year budgeted for receipt of $13.8 million in the federal funds that are generally restricted for use in low-income census tracts.

A future influx of well-to-do new residents to the former arena site could make the tract ineligible for CDBG funds. That could mean less funding for projects elsewhere in the neighborhood, according to an item in the Hill CDC’s February newsletter.

A change in tract demographics could also have ripple effects on funding to the Hill for “affordable housing, affordable commercial, and other equitable community development efforts,” according to the Hill CDC’s newsletter.

Hill CDC President and CEO Marimba Milliones could not be immediately reached for comment Monday.

The CDC’s leadership is also unhappy that it was not consulted, writing in the newsletter that it “was reckless of any party involved to lobby for this action without proper community engagement and assessment of the potential negative impacts.”

How did this happen?

According to a DCED spokesperson, Mayor Bill Peduto wrote to Gov. Wolf on March 4, 2019, asking the state to petition the federal government for help with Opportunity Zone eligibility for the site.

In April 2019, Davin wrote to then-Treasury Secretary Steven Mnuchin, noting that tract boundaries separated the arena site from the rest of the Hill, therefore making the 28 acres ineligible for Opportunity Zone investments.

Davin asked for “all appropriate administrative and legal action to include the Lower Hill [arena] Site among the Census Tracts so designated as Opportunity Zones.” His letter noted the Penguins-related redevelopment effort, but did not indicate whether the team had notified the state of the issue.

Acklin called the arena a "paradigm site" for the program, based on "our historic commitments to minority participation, wealth creation and direct community benefits to Hill District residents."

The Census Bureau did not respond to a request for comment.

Comes at a delicate time

The Penguins have asked the Hill CDC to schedule a neighborhood Development Activities Meeting. City code requires such a meeting before the City Planning Commission and some other panels hold public hearings on developments of certain sizes and scopes.

The Hill CDC wrote to the Urban Redevelopment Authority board saying that such a meeting is premature because the Hill’s Development Review Panel hasn’t given the plans passing grades and some requirements of a 2008 Community Benefits Agreement and Community Collaboration and Implementation Plan have not yet been met.

But the city code requires that the Hill CDC, as the neighborhood’s registered community organization, schedule the requested meeting, and it’s now set for March 15. The tract issue may only make it that much more contentious.