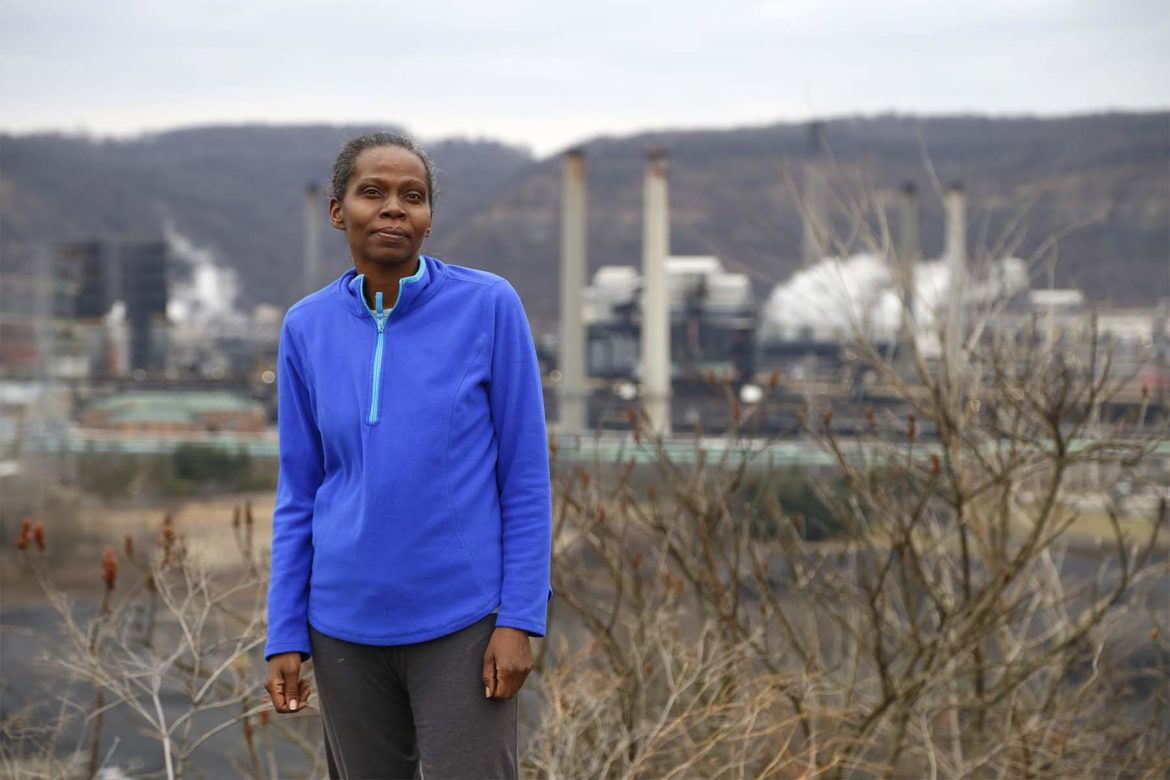 Melanie Meade stands near her home in Clairton, not far from U.S. Steel's Clairton Coke Works. (Photo by Ryan Loew/PublicSource)

I live in a third-generation family home. It sits on a ridge at the top of the hill overlooking U.S. Steel’s Clairton Coke Works. My father worked hard on this house; he added onto it, extended it out, lacing it with gorgeous stained glass windows that he procured from local churches or schools when they were being torn down in our area. As long as the curtains are drawn back, I can see the smoke billowing from the stacks. The stench ranges from rotten eggs to burning rubber.

Still, my father and mother loved their hometown.

My father’s mother's family had a long history here. They had once owned land from beyond Woodland Terrace up to the Desiderio Memorial Park where a 1950s war missile is located; the stretch of land was known as Randolph Hollow. The Randolphs, my father’s family, were fixtures in the Mon Valley long before the Clairton Coke Works. As far as I know, none of my immediate family members had taken on full-time, permanent work at the plant but most all had worked there temporarily or for a summer.

I, on the other hand, never thought of Clairton as my hometown and I rarely felt welcome. Unlike my siblings, I didn’t have my identity wrapped in Clairton schools because, during the mid-1980s, my mother asked for a divorce. She wanted freedom to grow outside of the norm of her everyday life in the Mon Valley. So, from seventh grade to high school, I studied in Beaver Falls and then at James Wood High in Winchester, Virginia.

I remember my high school science teacher having a debate about the climate issues that politician and environmentalist Al Gore was raising. Our teacher encouraged us to take a stance and live by it.

Visiting Clairton on the weekends, it seemed as if my peers there lived in a different world. Many of the students in Clairton high school weren’t discussing climate issues. They called me a nerd and teased me for taking it seriously. The school district in general didn’t seem to care about climate change and environmental issues while it had a major polluter as its neighbor. Ironic because it has not changed much since. The only thing that the school district seemed to focus on was football.

In 1992, I came back to Clairton to attend the University of Pittsburgh. My goal was to complete a degree in African and Latin American studies. My path took some unexpected turns. I had my son in 1996, then worked and lived in the Washington, D.C., area for a while. But the next few years were years of tragic losses.

In 2011, I buried my eldest brother. He was a 45-year-old recovering addict with heart valve failure.

In 2013, my father passed away at 73. He had heart problems. My father had always been our protector, our very own Iron Man or Man of Steel. He had run for mayor of Clairton three times. Had he not passed away, he may have never given up. He was a devout gardener. I thought he’d be around for another 15 to 20 years.

Six months after my father’s death, my mother passed.

The legacy of these losses weighed heavily on me when I met Dave Smith in 2017. This burly gray-haired man worked as an outreach coordinator for the nonprofit Clean Air Council. He had come to our Clairton Community Day with hopes to educate, empower and mobilize the community around the impact of the Clairton Coke Works and put pressure on the Allegheny County Health Department to stand up for our clean air rights. Very few people stopped to chat with him. He was holding a sign that read: “Clean Air Now! Ask about our Legacy of Losses Campaign.”

Confessing to him that I had lost so many family members recently, I felt drawn to learn more about the program and offer my skills and experiences. We began talking about the Clean Air Act, the position of the Clairton Coke Works and the documented health inequity our town suffers with sporadic attention from government agencies in power to change this experience.

Our little town has a bad reputation. It’s known for poor leadership and crime. Our school district has been among the lowest achieving in the state for decades. And some people would say the reason so many Clairton children are sick is because the parents don’t care about their health.

I don't think that generalization of our city’s parents is true, but quite often, I find myself feeling stuck and unwelcome in Clairton. History has shown that people who are in the most need of help are often skeptical of whether advocates and other actions are really helpful at all. While I feel like I’m fighting for our basic rights to clean air, I’m living in a city that doesn’t seem to make a big deal over the pollution and its adverse effects on children and the community, especially people of color.

So why do I stay? It’s because of my deep family roots in the region and my growing family of two grandchildren and one on the way, which stimulates my desire to serve the community. I am a caregiver. I care about people.

I attend a lot of public meetings about our air as a member of the Valley for Clean Air Now, an offshoot group of the Clean Air Council and Clean Water Action for residents of Clairton and the greater Mon Valley. I remember how shocked I was after one public meeting where a doctor who does extensive research about the asthma epidemic in our town shared the numbers. I see individual stories every day, but I didn’t realize until that day how dire our situation is. The childhood asthma rate here is higher than 22%, nearly triple the national average.

Given the realities and these numbers, how could anyone speak highly of the progress made in the city? 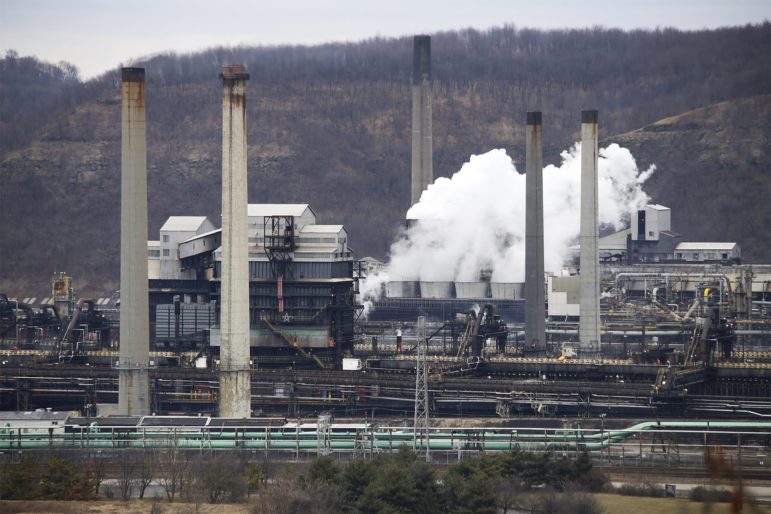 We seem to be in desperate need of a true savior for our so-called City of Prayer. Sure, dilapidated homes are being knocked down and the mayor pulled us out of Act 47 (economically deprived status), but what does it really mean for the residents who are still 20 times more likely to develop cancer from air toxics than people in most areas surrounding Allegheny County?

We are still inhaling polluted air, and the Clairton Coke Works is still willing to pay thousands and millions in fines rather than fundamentally, transparently and completely fix the problem.

My parents gave their very best to Clairton. My father adored his hometown and stayed despite the option to live rent-free on a university campus for work. My mother taught special education in Clairton schools, and she invested personal time to discuss with them how their voices were needed to change or prevent policies that did not serve their children. I know many were appreciative of her lessons.

But I also realize it’s hard to speak up for fear of retaliation, especially in a small community. There are silent witnesses and victims among us. But we must muster a voice in ourselves and our children and understand our own experiences have importance. These experiences must be shared with a world in turmoil as we all are grappling with climate change issues and abusive environmental practices.

When my son plays outside, I see the steam rising above and it breaks my heart. I want a better life for him. That’s why I am driven to fight for the public’s health — for him, for other kids and for myself. I have a dream that my son, one day, becomes part of the solution and I want to be around to see it.

Related stories on air quality from the PublicSource archives:

What you should know about Pittsburgh's air quality (From December 2016)

Pittsburgh has glaring environmental problems. So why the greenwashing? (First-person essay from December 2017)

Will Pittsburgh flourish as a hub of eds and meds or gas and petrochemicals? Can we have it both ways? (From April 2018)

When better isn’t good enough: Why I tell my Google co-workers and industry peers to avoid Pittsburgh (First-person essay from January 2020)

Not good enough for whom? Pittsburgh is a place worth fighting for (First-person essay from January 2020)