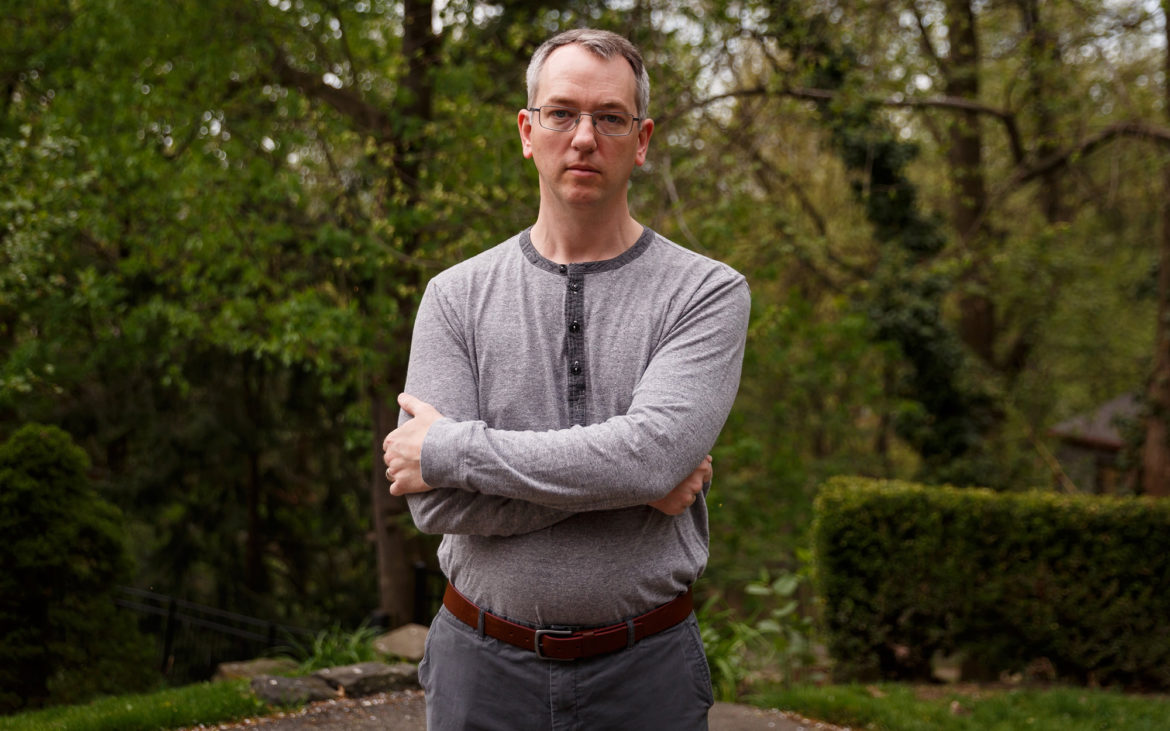 Greg Langmead sometimes wakes up at night to the smell of rotten eggs at his Edgewood home. (Photo by Maranie Rae Staab/PublicSource)

Jim Kelly, the deputy director of environmental health for Allegheny County, made a surprise announcement at the most recent board of health meeting last month.

He said his department was starting to develop more stringent emission regulations that would improve an air quality issue that has long gone unaddressed.

The issue is one that plays an outsized role in perceptions of Pittsburgh’s environment: the rotten egg smell that many people say disrupts their lives. The smell on its own doesn’t cause harm. But some residents worry that the source of the foul smell — hydrogen sulfide — is sometimes emitted with other substances, like benzene, a known carcinogen.

Reducing harmful pollutants has long been the county’s focus, but it has also been out of compliance for its smell about one day a week every year for decades. The new regulations being developed have the potential to continue decreasing the emissions of harmful gases, but one of the main purposes would be to cut down on the stench floating across the city.

One of the board members asked, “Is industry aware of this?”

“Not yet,” Kelly said at the May 2 meeting. And then, after the whole room broke into nervous laughter, Kelly added, “They are now.”

Hydrogen sulfide is a gas emitted naturally in sulfur springs. But locally, it typically comes from either a sewage treatment plant or an industrial operation. 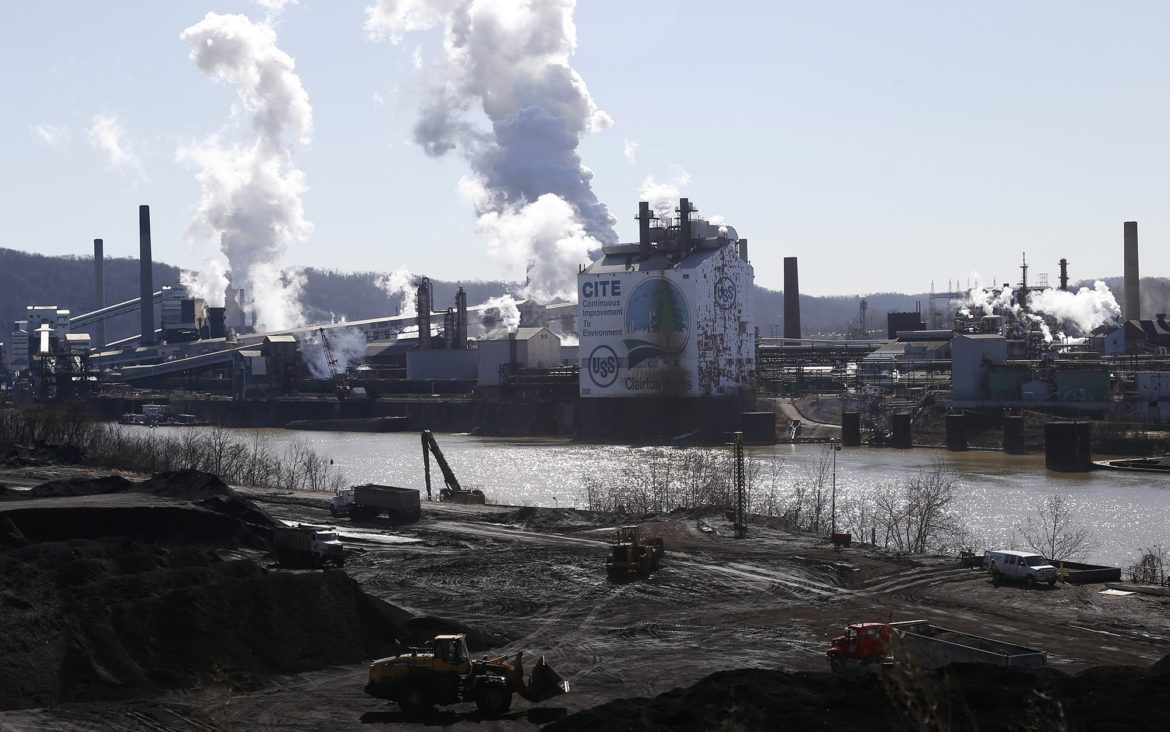 A representative for U.S. Steel acknowledged receiving multiple PublicSource emails but did not provide a comment. The local Steelworkers union did not respond to requests for comment.

Greg Langmead sometimes wakes up at night to the smell of rotten eggs at his Edgewood home. Langmead, an Apple employee, moved to Pittsburgh from Los Angeles. The air didn’t smell this polluted in Los Angeles, he said. “Most long-term residents feel like [the smell] is so much better than it was,” he said of Pittsburgh. “Whereas for me, this is really gross.”

A colleague at Apple moved away, in part, because of the air quality, he said. Langmead doesn’t want to move. As long as it seems like there is a chance the air quality will improve, he wants to stay. 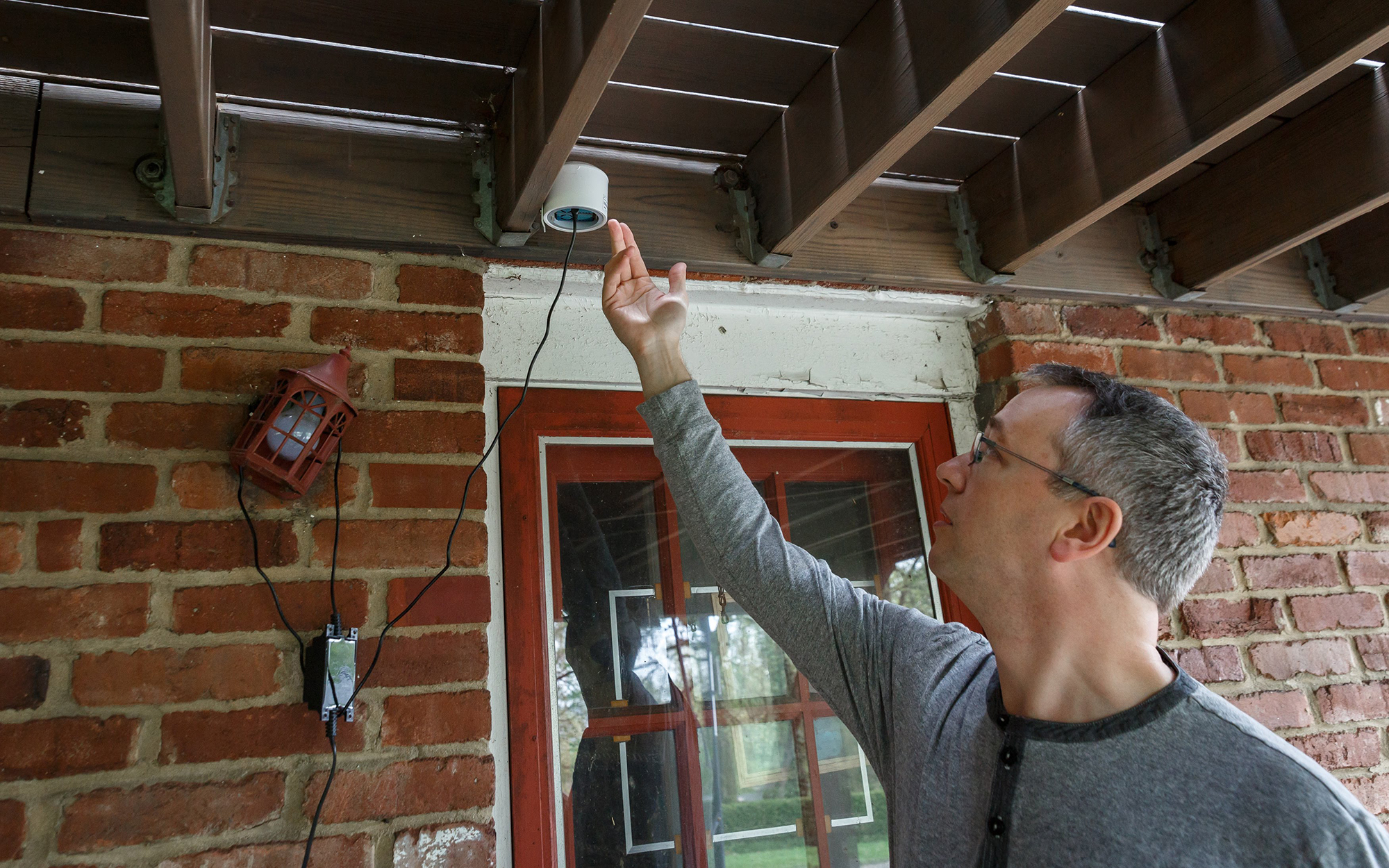 Greg Langmead is able to track the air quality surrounding his Edgewood home using a monitor set up behind his home. (Photo by Maranie Rae Staab/PublicSource)

While Allegheny County has made progress at reducing most other types of pollution, the smell issue hasn’t improved, said Rachel Filippini, the executive director of the Group Against Smog and Pollution [GASP]. For decades, the county has exceeded the threshold for hydrogen sulfide emissions an average of once a week.

“Most of the time there are consequences, which force improvements when air quality standards are breached,” Sue Seppi, the former director of GASP, told the Allegheny County Board of Health last September. “But for the 24-hour hydrogen sulfide standard in the Mon Valley, not so much."

When hydrogen sulfide escapes on its own — at the low levels typically seen in the county — it’s considered benign. But because it has such a strong odor, it has a big impact on local perceptions of air quality. The smell merely underscores the failing grades the county continues to receive from the American Lung Association for its harmful air pollution.

There have been more than 2,500 reports of a sulphuric or rotten egg smell in the past 20 months on the Smell PGH App. Complaints that include the words “sulfur” or “rotten eggs” comprise more than a quarter of all the complaints.

More than a quarter of the complaints Pittsburghers have made on the Smell PGH app are about the rotten egg/sulphurous smell. The app, created by CMU CREATE Lab, tracks the location of the complaints. The largest number of complaints have come from Pittsburgh's East End.

Pennsylvania set a limit on hydrogen sulfide emissions decades ago, but the county has focused on reducing other pollutants rather than trying to reduce the smell.

One of the challenges of regulating the smell is the threat of legal action from industry. There aren’t clear federal standards about how hydrogen sulfide can be regulated or even a widely accepted measuring tool, Kelly said. There is a risk that any action the county takes could be challenged in court, he said.

Although the county may have a strong suspicion the smell is coming from a particular industrial plant or sewage treatment facility, they would need proof to justify imposing fines. The county, Kelly said, would likely have to spend hundreds of thousands of dollars of staff time to prove where the hydrogen sulfide emissions are coming from.

"A lot of people don’t understand we have limited resources, and we prioritize that based on public health,” Kelly said.

"A lot of people don’t understand we have limited resources, and we prioritize that based on public health.”

The new standards would limit “fugitive emissions,” which leak out of the batteries in coke plants. The batteries can leak because oven doors warp in the extreme heat and no longer shut as tightly. To address the leaks, companies would likely be on the hook to pay for repairing or replacing oven doors.

Most of the bad smell doesn’t come from the plumes of smoke that can be seen spewing directly out of the stacks at the plant, according to the health department. The smell comes from the smaller amounts of gases that leak through doors that don’t shut as tightly as they are supposed to inside the coke plant.

Traditionally, the county department has focused on federally regulated pollutants that are known to harm health, like sulfur dioxide, most of which are emitted directly from the stacks. That’s the department’s legal mandate, Kelly said, and that’s what its funding is tied to. It’s unusual for a county to regulate smells and so there isn’t a lot of precedent for it.

Because the new rules would limit all of the gases that escape through the cracks, including federally regulated pollutants like sulfur dioxide, the rules should have a better chance to withstand legal scrutiny from industry.

“It shouldn’t be possible for all the plants to be completely in compliance and still have these persistent violations.”

Right now, the Clairton Coke Works is abiding by the limits of how much hydrogen sulfide it can emit through a stack. But the gases, at the Clairton plant and others, can leak without being measured and the smell persists.

“It shouldn’t be possible for all the plants to be completely in compliance and still have these persistent violations,” said Joylette Portlock, one of the health department board members.

Sewage treatment plants are also a significant source of smell pollution but those plants are not under the health department’s jurisdiction, Kelly said.

A spokesperson for ALCOSAN wrote in an email that its treatment plant made upgrades in the late 1990s and again in the early 2000s to prevent “the foul air” from escaping. Now, the plant’s stink is enclosed and treated with a caustic soda and bleach, which reacts with the hydrogen sulfide to eliminate the smell.

On a recent weekday, Cliff Jones stopped off at a gas station near the Clairton Coke Works. He was on his way to pick up his grandson, who works at the plant. Jones, who lives in Wilkins Township, said he keeps his windows up to keep out the smell. 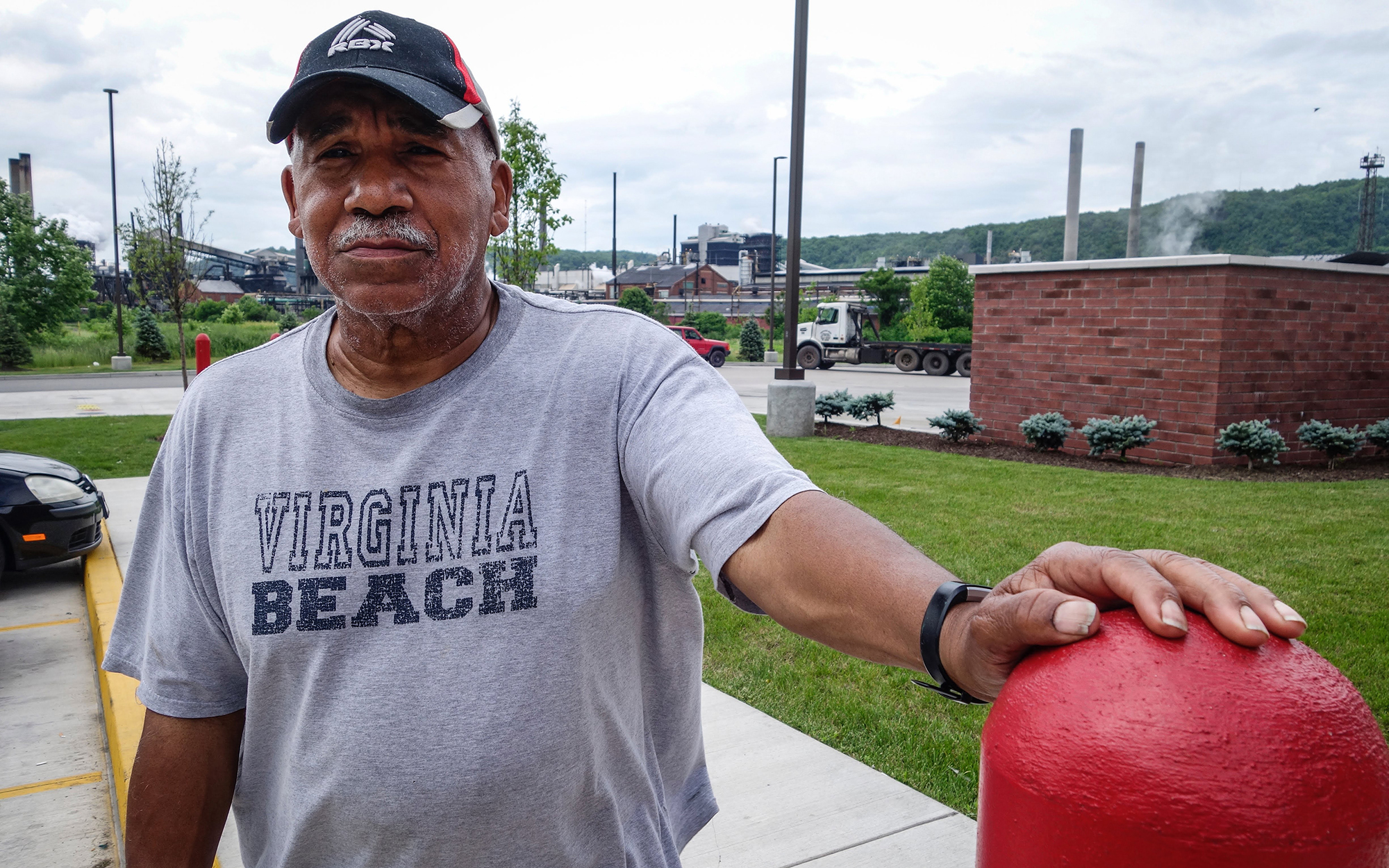 Cliff Jones rolls up his windows when he picks up his grandson from his job at the Clairton Coke Works. (Photo by Oliver Morrison/PublicSource)

He’s lived in the area his whole life, he said, so he’s used to the smell and not afraid of it.

Amari Long, a 19-year-old pre-med student at the University of Pittsburgh, who stopped by the same gas station, said she doesn’t notice the smell much either. She’s lived in Jefferson Hills all her life.

She thinks that’s part of the problem: Locals don’t know about the potential health impacts of pollution and, even when it’s not causing cancer or asthma, the bad smell can have an impact on quality of life.

The largest number of smell complaints on the Smell PGH app come from zip codes on the East End of Pittsburgh, not next to the Clairton Coke Works, but from people like A.J. Collins in Swissvale.

Collins has reported the foul sulphur smell a couple of times but he can’t report them all. “If I reported it every time I smelled it, I would have reported it 300 times,” he said.

Collins said he’s lived in California, Maine, Texas and South Africa. “I’ve never had this issue,” he said. “Definitely it’s the first time I was smelling pollution other than people burning leaves and stuff like that.” 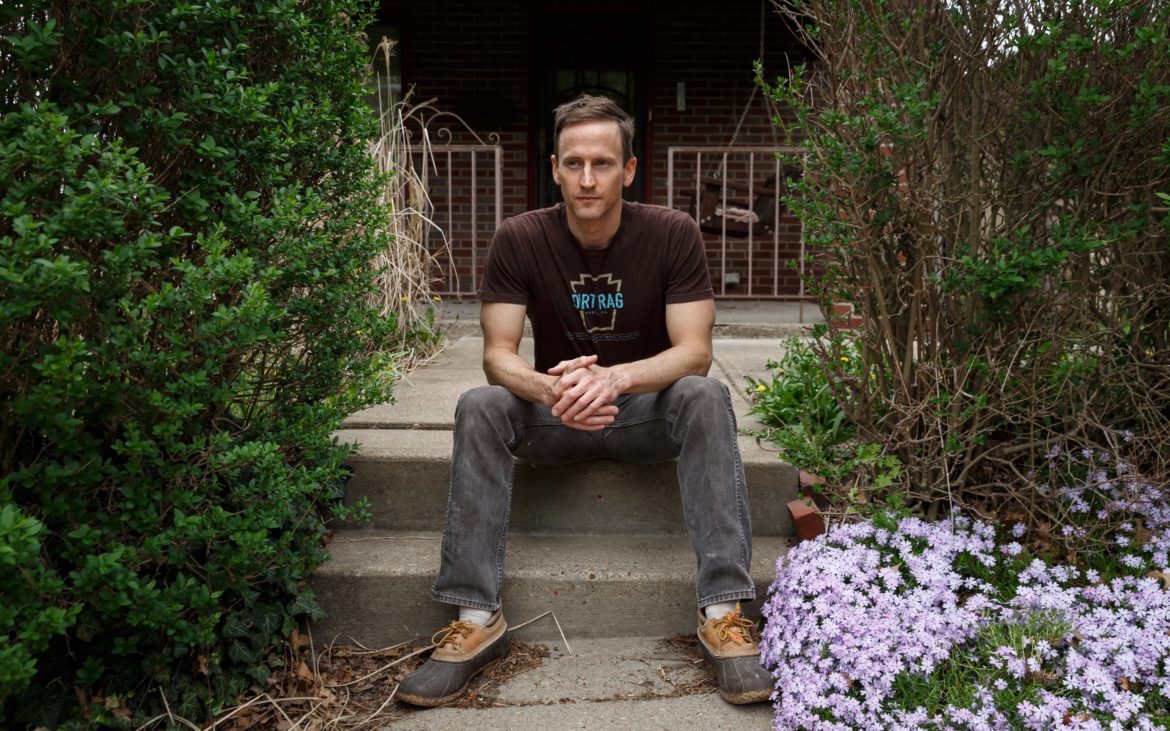 A.J. Collins of Swissvale has lived in California, Maine, Texas and South Africa. “I’ve never had this issue,” he said. “Definitely it’s the first time I was smelling pollution other than people burning leaves and stuff like that.” (Photo by Maranie R. Staab/PublicSource)

The smell pollution has become harder to control in recent years because of the increasing number of inversions, as cold air traps heavier gases like hydrogen sulfide and the smell doesn’t dissipate as quickly.

Kelly can’t say how much rotten egg smell would go away if new regulations are enacted because it’s unclear exactly how much hydrogen sulfide is leaking out right now.

“I expect this will be contentious,” Kelly told the health department board, because of the money it would take to limit leaks. “I’m sure there will be a lot of pushback from industry.”