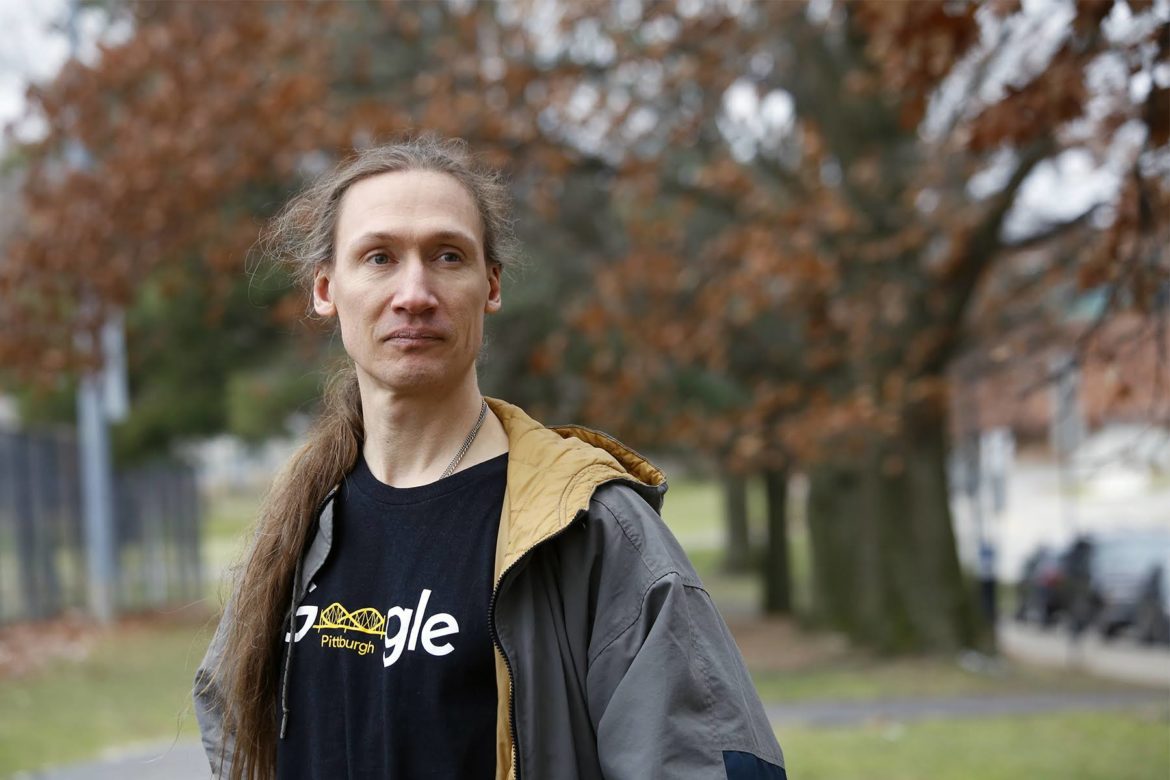 Dennis Towne is a site reliability engineer at Google. He is transferring to another Google location to leave Pittsburgh's bad air quality behind. (Photo by Ryan Loew/PublicSource)

Editor's note, Jan. 11: Google issued a statement in response to this first-person essay.

In 2017, I was working for Google in the Bay Area of California, lamenting the ever-rising cost of housing, when a co-worker mentioned he was moving to Pittsburgh. I talked it over with my partner, and we did some basic research. We checked property values, nearby amenities, crime maps, traffic maps, public transportation and several other things before we decided to commit to the move.

Eight months later, in September of that year, we landed two blocks from my workplace in Bakery Square. I was really happy with this decision and talked to a lot of friends and co-workers in California and other areas, telling them about the relatively low cost of living compared to other Google locations and how we could even live within walking distance of work.

Unfortunately, shortly after we arrived, we started noticing an obnoxious stench in the mornings, a mix of smells resembling coal tar and sulfur. Some days the stench was there. Other days it was not. We thought at first it was just the recent repaving of the parking lot at the Chatham University campus near Bakery Square. A month passed, the asphalt set, and the smell didn’t go away. I began to wonder if someone in the neighborhood was burning tires, or if the nearby recycling center was burning trash at night. We could never pinpoint the source.

Things gradually seemed to improve as the atmospheric changes from winter set in, but then rapidly got worse as the spring and summer of 2018 arrived. Every few days there would be a particularly bad night, with smells so bad we couldn’t sleep. On a few of those nights, I went out to explore the neighborhood near Bakery Square but never did hunt down the source. It was nearly the end of 2018 before I finally mentioned what we’d been experiencing to the right person. They had an answer I didn’t expect.

This was utterly baffling to me. Industrial air pollution, as in “that thing that we used to have in the 1960s.” Sure, countries like China with lax regulation still have that, but here in the United States?

At age 46, I’ve lived in almost a dozen different places in my life, ranging from rural farming communities to large cities. I’ve lived in California, Oregon, Alaska, Utah, Colorado, Minnesota, (upstate) New York, Kentucky and now Pennsylvania. In all that time, I’ve encountered air pollution like this exactly once: driving near the petroleum cracking plants north of Salt Lake City in the late 1980s.

Industrial air pollution is so rare in my experience that I literally didn’t even think to look for it here.  I wonder how many other people new to Pittsburgh are in the same boat.

Meanwhile, it’s 2020, and I continue to wake in the middle of the night to a stench that burns the lungs and turns the stomach. Perhaps I'm just in a particularly bad location. That may be true, but it's worth considering that I live two blocks from Bakery Square, near the corner of Fifth Avenue and McPherson Boulevard. This is the up-and-coming ‘tech district,’ with a new office building being built and housing springing up everywhere nearby. Yet even here, the pollution levels are atrocious; one need only to install the ‘SmellPGH’ app to see complaints and historical data, as well as measurements from local detection stations.

"Multiple co-workers have left Pittsburgh in the last two years, several citing concerns about air quality and lead in the water."

Some parts of our government do seem to understand that this is a problem, but some do not. In a recent PublicSource story, I was struck by Allegheny County Executive Rich Fitzgerald noting that local growth of businesses like Facebook, Google and Uber show that businesses aren’t being scared away by concerns about air quality.

I can’t speak about Facebook or Uber, but in regard to Google, I can say without question that Fitzgerald's assertion is not true. My team and all other local teams I work with have struggled to acquire and keep talent for the entire time I've been in Pittsburgh. Multiple co-workers have left Pittsburgh in the last two years, several citing concerns about air quality and lead in the water.

This is really unfortunate. I like Pittsburgh in a lot of ways. I like my job, I love my co-workers, and I have a good path lined up for my career. However, I simply cannot justify staying here.

As a result, I am also leaving and transferring to a different office within Google. However, I am not going quietly. I am active on our internal lists, encouraging people to use the ‘SmellPGH’ app and to submit county and state environmental complaint forms, for all the lack of good it seems to do.

I was convinced to move to Pittsburgh on the advice of a co-worker three years ago; I am now giving advice to avoid Pittsburgh. I credit myself with discouraging at least a dozen contacts in the tech industry from considering Pittsburgh until the situation improves.

Pittsburgh has made tremendous strides in terms of air quality and pollution in the last few decades. However, what’s considered acceptable by modern society has changed. The air quality may be "better now than in the last 50 years," but that doesn't mean it's good enough to grow the city and the region.

Dennis Towne is a site reliability engineer at Google.  He can be reached via email to dtowne@google.com.

Google has been a proud member of the Pittsburgh community for almost 15 years. We’ve grown to more than 700 employees and are excited to continue growing alongside the local community for years to come. There’s been discussion surrounding a recent article published expressing concern with some local environmental issues. I want to be clear that the article was the personal opinion of one of our employees and that Google remains committed to Pittsburgh. We will continue to work alongside our elected officials at the city, county and state levels to ensure Pittsburgh remains a great place to live, work and play. We have industry-leading sustainability goals and a track record of collaboration on issues like detecting methane leaks and providing the city with tools like Environmental Insights Explorer that aid governments to make better-informed decisions. We look forward to doing more of this in the future.”
- Liz Schwab, Head of Public Policy and Government Affairs

Related stories on air quality from the PublicSource archives:

What you should know about Pittsburgh's air quality (From December 2016)

Will Pittsburgh flourish as a hub of eds and meds or gas and petrochemicals? Can we have it both ways? (From April 2018)