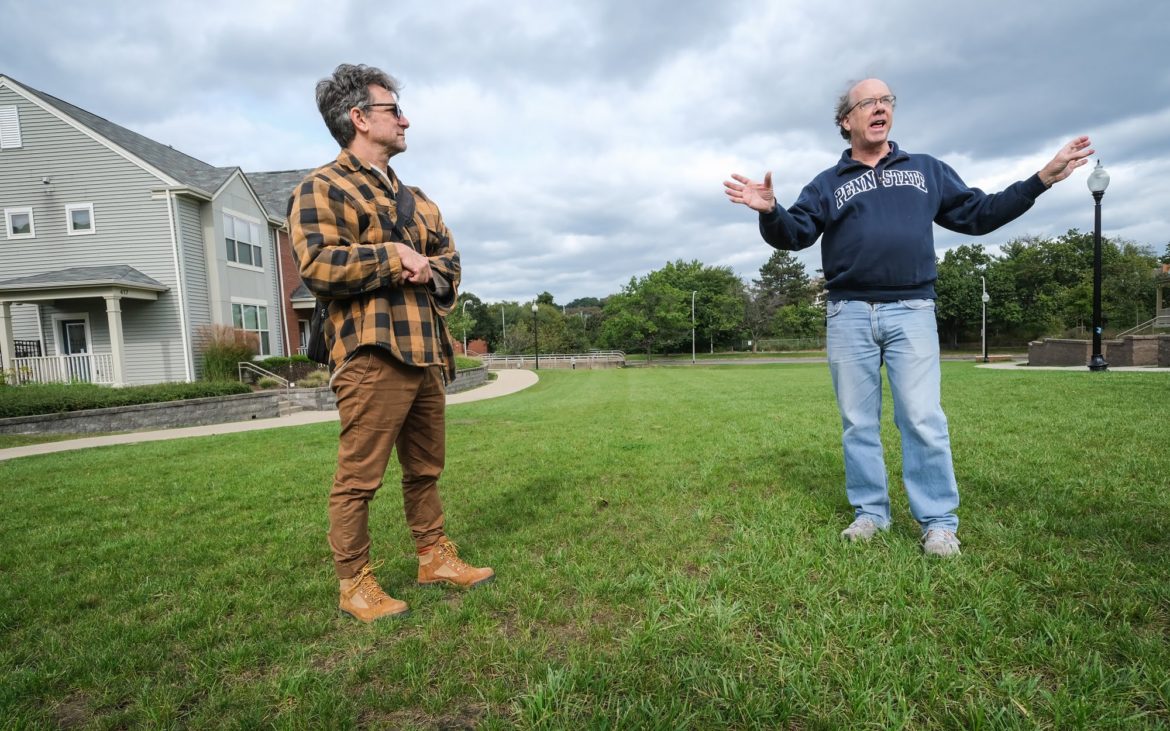 Ian Lipsky (left) and John Stephens are working with neighborhood groups near the site of deadly flooding on Washington Boulevard in 2011. They hope to reduce flooding by bringing an old stream back to life. (Photo by Terry Clark/PublicSource)

Kimberly Griffith and two of her children were driving home after lunch when the rain started to pick up. The day — Aug. 19, 2011 — had already been a rainy one in Pittsburgh.

But on that afternoon, another 2 inches of rain fell in one hour.

Griffith pulled up to the bottom of Washington Boulevard in a storm with enough force to blow off 60-pound manhole covers. The street filled with 9 feet of rainwater and sewage, and Griffith’s minivan was submerged, killing her and her two daughters. Another woman was killed after being swept into the sewer.

Such heavy rain used to fall once every couple of years. But in the last eight years, the area has seen storms with an inch or more of rainfall in a single hour about three times every year. The prevalence of intense rain will likely worsen with climate change, scientists say.

Solutions have long been ignored. Flooding killed a motorist on Washington Boulevard in 1951, but Pittsburgh City Council at the time deemed the $785,000 needed to raise the road and build a storm sewer too costly.

More than 60 years earlier, the city buried the stream that once carried floodwater to the river. Renowned entrepreneur and judge Thomas Mellon argued against it, saying that there was too much water to fit into an underground sewer line. "This run in cases of heavy rains is turned into a raging torrent which an eight-and-a-half foot sewer cannot carry off,” Mellon said in an 1887 article in the Pittsburgh Commercial Gazette.

Now neighborhood groups near the former stream want to bring it back to life in the area around Larimer, Highland Park, Lincoln-Lemington-Belmar and Homewood West. When torrential rain comes, advocates of the resurrected stream hope it will stop sewers from backing up and give water from the hills surrounding the road a natural place to go.

The most ambitious designs for the project could stop much of the flooding on Washington Boulevard and remove hundreds of millions of gallons of sewage from the Allegheny River each year, according to a 2017 design by the firms eDesign Dynamics and Evolve. Millions of dollars in green infrastructure would be invested in some of Pittsburgh’s most economically distressed neighborhoods. But costs could run from $40 million to $80 million. This would make it the most expensive green stormwater project ever undertaken in the city.

“The technology, the design is all doable,” said Ian Lipsky, one of the designers at eDesign. “The biggest challenge to implementation is political will and cost.” 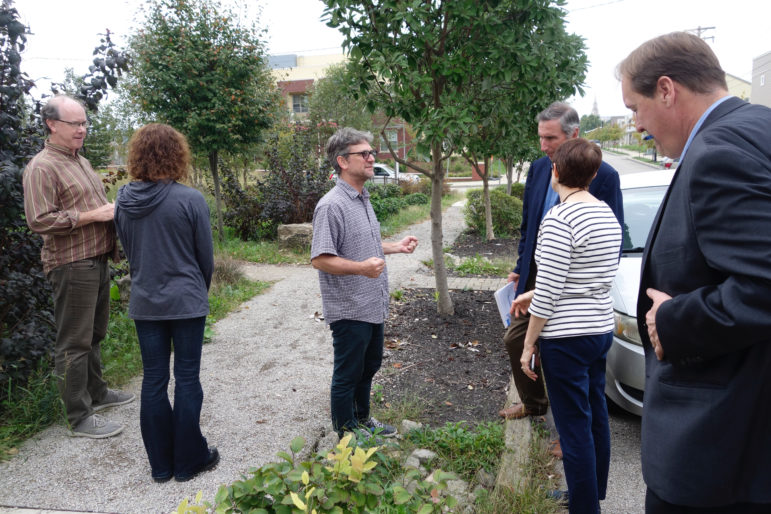 Ian Lipsky (center) talked to ALCOSAN board members and officials about the permeable sidewalk at a small green infrastructure project. (Photo by Oliver Morrison/PublicSource)

After several years of giving tours to anyone who would listen, members of the Negley Run Task Force had a breakthrough. Officials from the Allegheny County Sanitary Authority [ALCOSAN] had agreed to take a tour of the proposed stream project site in early October. ALCOSAN is one of the few agencies with the resources and mission to fund the project.

ALCOSAN’s current plan is to build tunnels that store sewage, not streams.

The authority is expected to spend $2 billion in a federal-mandated agreement to reduce sewage runoff into area rivers by 2026. The spending, which is funded by customer rate increases, will total $3.6 billion over the next two decades to help reduce overflow.

“It’s going to be the largest infrastructure project in the region ever,” Lipsky said. “From my point of view, it would be an enormous shame if its only purpose is to keep sewage out of the region.”

“There is a limited number of piles of $2 billion lying around,” said Thomas Hoffman, the conservation program coordinator for the Sierra Club’s Clean Rivers Campaign in Pittsburgh. Hoffman helped organize the October tour, which began a mile from the scene of the 2011 drownings.

Advocates acknowledge the big expense of Little Negley Run. But they say the project could also prove more economical than a system of underwater tunnels. That’s because the stream would help alleviate some of the flooding and sewage basement backups. The additional landscaping would make the neighborhoods more beautiful.

If enough neighborhoods connect to the stream, advocates believe a portion of the tunnel system meant to address sewage overflows would be unnecessary. 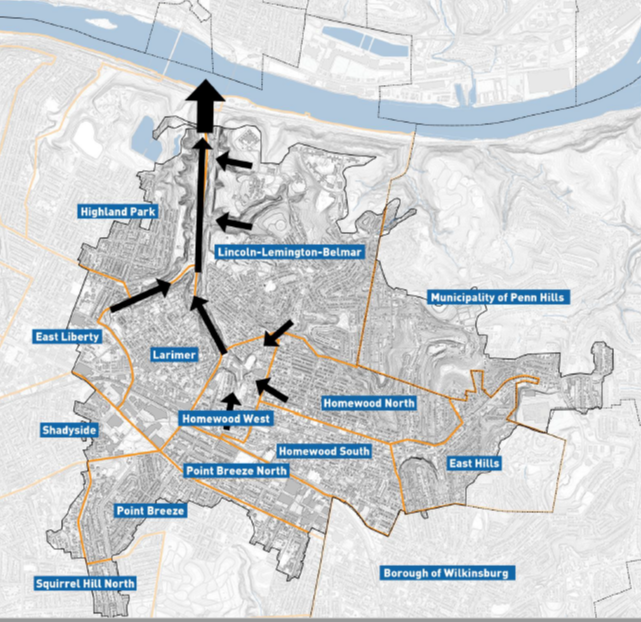 Neighborhood groups in the area around Larimer, Highland Park, Lincoln-Lemington-Belmar and Homewood West, want to bring the Little Negley Run back to life. The arrows show the potential path of the main stream from a 2017 conceptual design. Other neighborhoods in the watershed could drain into it. (Image courtesy of eDesign Dynamics)

The Liberty Green park in Larimer will serve as the symbolic head of a massive green infrastructure project that is being designed by the Army Corps of Engineers and PWSA. (Photo by Terry Clark/PublicSource)

ALCOSAN is required by the Environmental Protection Agency [EPA] to reduce sewage overflow into Pittsburgh’s three rivers. If advocates for Little Negley Run can’t show that the stream can accomplish that quickly, they worry the EPA will force ALCOSAN to invest in tunnels rather than green infrastructure.

“The EPA will come back in five or six years and say, ‘Show us what you got.’” Hoffman said. “And if we don’t have enough to show them, they’ll go, ‘There you go, you have to build the tunnels.’”

A spokesperson for ALCOSAN said the authority didn’t want to speculate on plans and costs until they receive a proposal for Little Negley Run.

The first stop on the Little Negley Run tour was Chadwick Playground, a small park in Lincoln-Lemington-Belmar. Grounded Strategies, a nonprofit that works with local communities to build green spaces, planned to add three rain gardens there in 2018 that would capture runoff from the hills surrounding the park. Eventually, this water could be diverted toward the newly built stream.

But when the bus arrived at Chadwick Park, nobody got off. The project they were supposed to be showing off never got built. Grounded couldn’t convince enough residents to help with the upkeep.

"Asking people to schedule their time and show up is harder than you might think,” Ariam Ford, a former project manager at Grounded, told the tour group, which included eight ALCOSAN officials and two board members. (Ford left Grounded a month ago for another job.)

Ford described the choice between underground tunnels and an aboveground stream as an environmental justice issue. 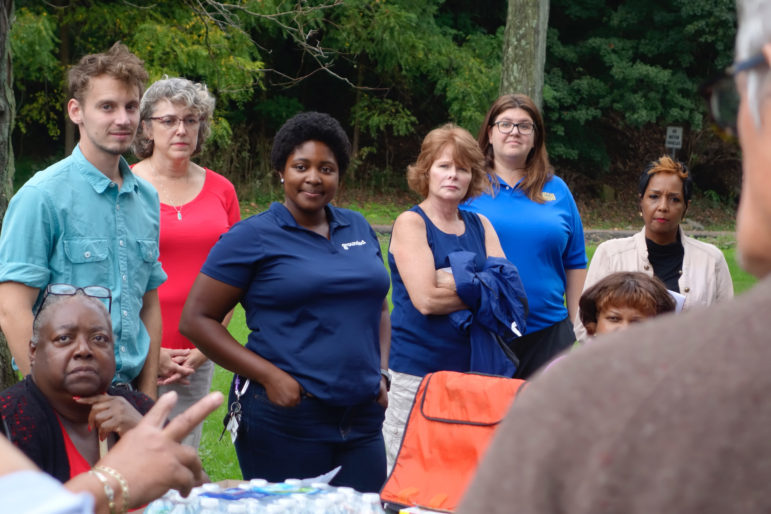 Ariam Ford (center left) listens to a speaker at the start of the October tour. Ford believes that ALCOSAN's spending decisions are an environmental justice issue. (Photo by Oliver Morrison/PublicSource)

Burying such a large infrastructure investment underground, rather than spending it on projects like Little Negley Run, may be efficient from the perspective of the people looking to solve river contamination, she said.

But that approach, she said, wouldn’t eliminate the flooding and basement backups that directly impact residents like she hopes the stream could.

"A lot of low-income homeowners who are affected by flooding and sewer basement backups don’t have the resources to address those issues,” Ford said. “They need more external support than someone who can just pay $20,000 for a French drain.”

ALCOSAN believes that green infrastructure projects will cost more money than its tunnels and that would mean even larger rate increases to customers.

So the first question one of the ALCOSAN officials asked Ford on the tour was: “What is the cost estimate?”

After two hours, the tour ended where it started: at Washington Boulevard.

Stephanie Walsh, the vice president of the Highland Park Community Council, made a direct pitch to ALCOSAN “to double down on its commitment to green infrastructure.” The success of Little Negley Run could be a proving ground, she said, “so then it’s a model you can export throughout your service area.”

ALCOSAN isn’t planning to remove the cap but could consider giving multiple grants at different phases of implementation, according to authority spokesman Joey Vallarian. 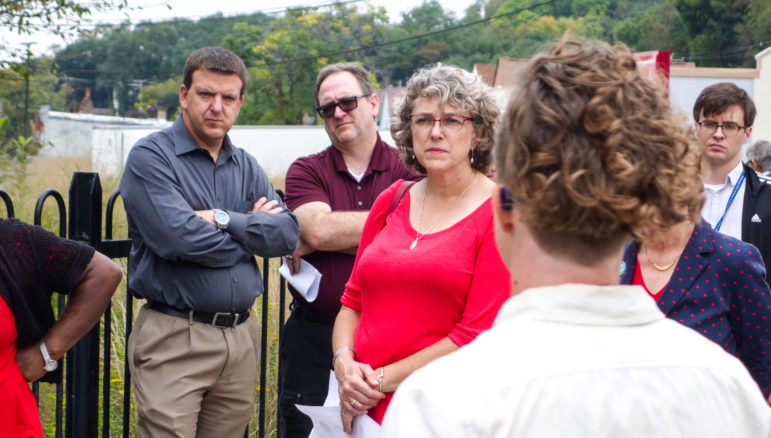 ALCOSAN officials are skeptical Little Negley Run can capture all the excess rain in the watershed, which includes 12 Pittsburgh neighborhoods and part of Penn Hills. That area can receive more than a billion gallons of sewage and rainwater on the rainiest days of the year.

Mike Lichte, ALCOSAN’s manager of planning, said at a regional sewer conference in October that removing enough water with green infrastructure alone would be expensive and difficult. “I’m not saying it can’t be done,” he said.

Green projects like Little Negley Run “are meant to help” plans for the underground storage tunnels to “perform better, not replace” them, Vallarian said.

ALCOSAN isn’t the only source of potential funding.

But even with an outlet for stormwater, Little Negley Run may not fully eliminate flooding risks, said Marc A. Glowczewski, chief of the environmental planning branch for the Army Corps of Engineers in Pittsburgh.

"I would hesitate to say that that design would alleviate the flooding completely,” Glowczewski said. "But we’ll make a dent in it for sure.”