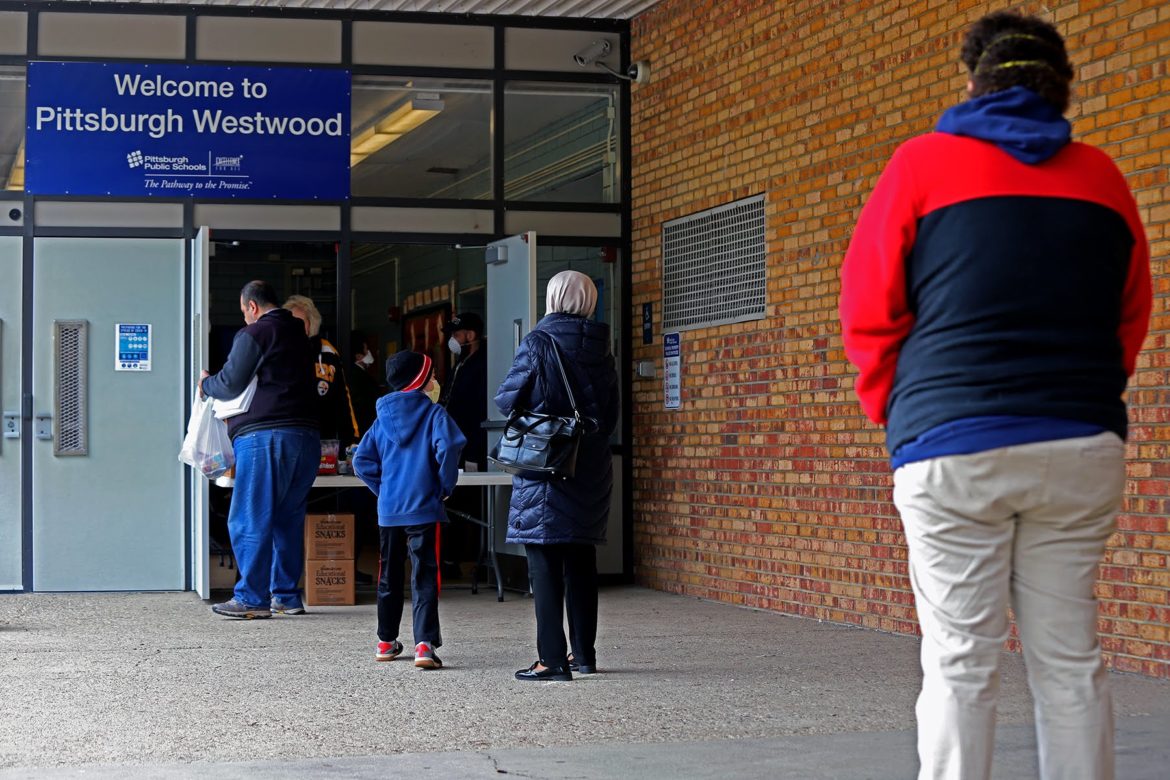 Parents and students line up in April 2020 to receive lunch and schoolwork packets at Pittsburgh Westwood K-5. (Photo by Jay Manning/PublicSource)

It’s a historic task in the making. How can Pittsburgh Public Schools reopen by the end of next month?

More than 300 parents, students, educators, public and health officials, community members and dozens of organizations collaborated on the undertaking. They spent hundreds of hours conversing about what families and staff need for a safe return to  Pittsburgh Public Schools [PPS] as part of the district’s All In to Reopen Our Schools campaign.

On Wednesday, 407 recommendations for the district from the campaign’s 14 subcommittees on topics from instruction to health and safety were made public on the district website.

The 407 recommendations are organized by what can be done immediately, before school starts, within the first 90 days and longer-term district aspirations.

Among the suggestions: a district-developed COVID-19 parent handbook to explain rules and day-to-day operations, a single learning management system to quell confusion and established procedures for holding IEP meetings with parents to identify individual student needs.

The drafted subcommittee recommendations also list its rejected proposals, such as district in-person Back to School events and dedicated video devices to capture live instruction for the at-home students each day.

The final “All In to Reopen Our Schools” district plan will be released to the public on July 22 — the same day the school board votes on the plan at its legislative hearing. A public hearing on the PPS plan is scheduled for July 20.

Those who wish to comment at the public hearing must first register by calling 412-529-3868. Once signed up, those who want to weigh in should submit a written public comment to lgetty1@pghschools.org. Public comments will be read aloud during the live-streamed virtual meeting by Chief of Staff Errika Fearbry Jones.

The recommendations and preliminary report give a glimpse into the minds of the district’s biggest stakeholders.

Based on the July 14 preliminary report and the 407 findings, here are some key takeaways for the Pittsburgh schools reopening:

Families can choose between full-time e-learning by choice, which has both teacher-led instruction and independent student work; or the in-school model, which will mix online learning and in-school instruction. The district also mentioned a third option at the Tuesday conference, a full-time online learning model for the entire school community in the case of another shutdown, severe spike in cases, or restrictions on people meeting in groups.

Superintendent Anthony Hamlet said Tuesday that planning for reopening is “a fluid process,” which is why they created three options.

“It's not static. It's based on the recommendations that we get. And they potentially change every day,” Hamlet said. “We need to be able to pivot at a moment's notice.”

Ted Dwyer, the district chief of data, research, evaluation and assessment, confirmed Tuesday the district is “moving to a one-to-one model.” That refers to a program in which every student receives a technological device. 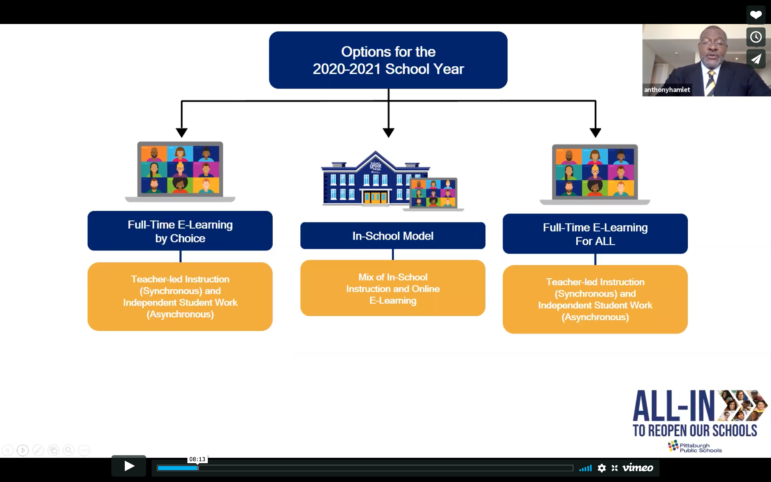 After receiving feedback from parents, administrators, teachers and paraprofessionals about confusion in the spring, the district decided to switch to Schoology as its only online learning management system. They will also integrate Microsoft Teams to support communication, Chief Academic Officer Minika Jenkins announced at the Tuesday hearing.

Among the immediate recommendations for the subcommittee on teacher and staff engagement is the increased use of town halls with the Pittsburgh Federation of Teachers and livestream events with Hamlet and executive leadership.

The subcommittee also proposed that timing on communications be adjusted “so that staff are getting the communication prior to families to avoid unpreparedness for parent questions.” They also noted staff should know what information has been shared with families, so they’re able to reinforce that information.

The subcommittee also proposed the use of text-messaging to replace robocalls to teachers, and using multiple channels to communicate.

Schools and classrooms will need to be much less crowded. Pam Capretta, district chief operations officer, said at a Tuesday meeting the facilities readiness team determined how many students can be in each classroom, given social distancing. At Allderdice High School, for example, 934 of its 1481 current students (63%) could fit under social distancing guidelines.

Bus rides will have one child to a seat. Drivers are recommended to disinfect between routes with a full disinfectant routine to take place each day. Transparent screens and dividers will be at main office counters, library counters, cafeterias, lab stations and other areas where social distancing can prove difficult. Shared equipment and materials will be heavily limited. 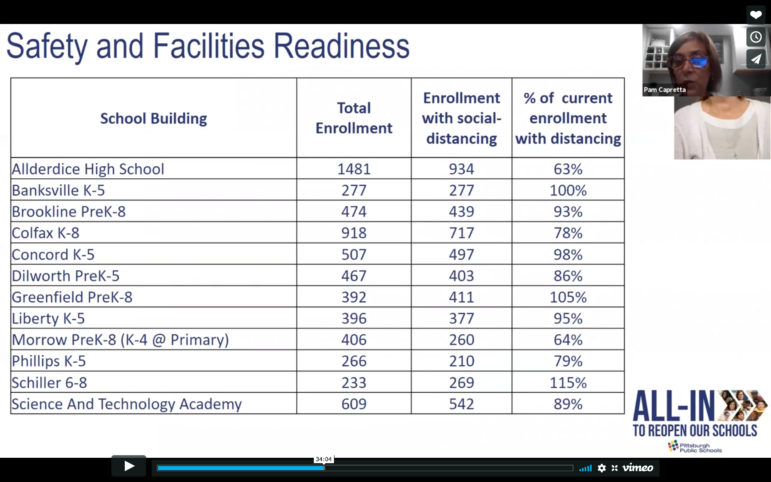 Pam Capretta, Pittsburgh Public Schools district chief operations officer at a July 14 meeting showed a facilities chart for how many students could fit in each school building with social distancing guidelines considered. (Screenshot)

Officials from Pennsylvania’s Departments of Education and Health on Thursday released updated recommendations for Pre-K-12 schools to guide their plans to reopen.
The departments recommended best practices, including mandatory face coverings at school and on the bus, daily symptom screenings by caregivers at home, and limiting the number of students on playgrounds at one time.

“Pennsylvania is a diverse state and that's why a single cookie-cutter approach to safely reopen schools would not and could not be effective,” said Education Secretary Pedro Rivera.

Rivera pressed that individual districts would need to make the best decision for their specific communities, but also said “a hybrid approach is a good model ... that engages each of our communities.”

“At the end of the day, we're going to make decisions based on the data that keeps students, families, our educators safe,” Rivera said. 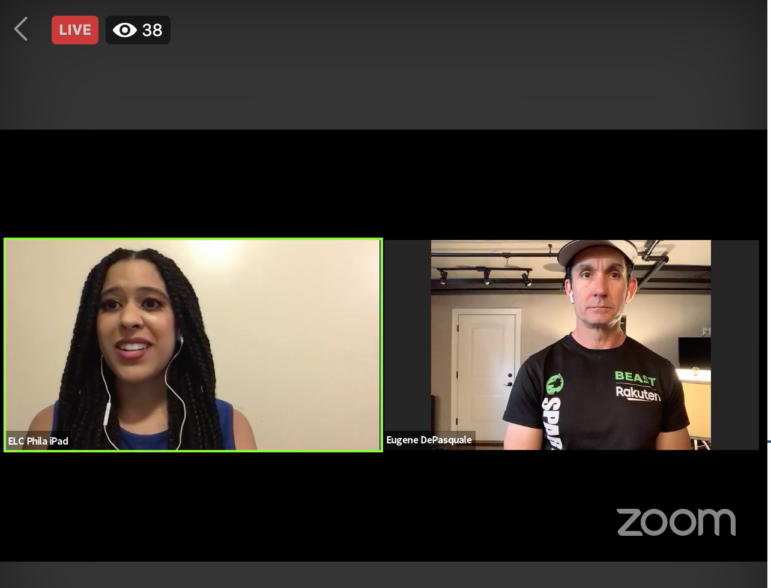 A few hours earlier, in a conversation on Facebook Live, Pennsylvania Auditor General Eugene DePasquale said every school district across the state and country will face rising costs, to provide quality education.

“There’s no question about it,” DePasquale said. “The cost is going to be high, but the cost of not doing this, long-term, will be even higher.”

The Philadelphia School District on Wednesday released its back-to-school plan, which included fewer students in classrooms, more staff and promises to sanitize classrooms and other spaces daily to minimize the spread of the coronavirus. The extra precautions were said to carry a price tag of possibly $80 million or more.

In the conversation with DePasquale, Attorney Paige Joki of the Education Law Center said  a return to normal for schools is “not appropriate.”

“What we need is to move forward and move towards equity,” she said. “We shouldn’t be moving towards the romanticized past that has never served students and that has propped up systems like white supremacy, but we need to look forward and be flexible.”

The 14 committees were separated by four categories: academic programming and instructional support; family support and wellbeing; school operations for a safe and healthy environment; and communications, outreach and community coordination.
Each committee was led by members of the district’s executive cabinet. Here’s a breakdown of the committees and their executive leadership.