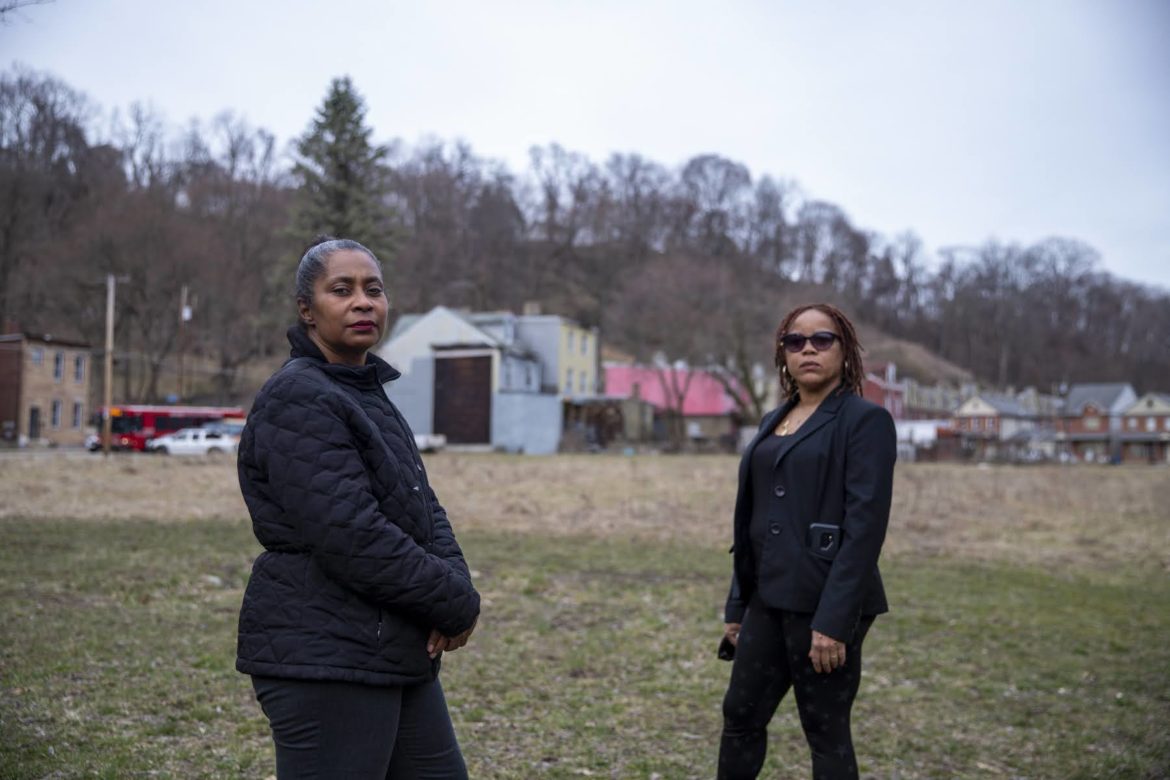 Debbie Reed, left, of California-Kirkbride Neighbors, and Angela Williams, of the Charles Street Area Council, stand on a field along North Charles Street on which they would like to see owner-occupied houses. (Photo by Jay Manning/PublicSource)

Long, dry grass crunched under Angela Williams’ workout shoes as she walked into the field she’s pondered for 32 years.

From this flat expanse in Perry South, you can drive seven minutes south and join the North Shore’s bustle, or seven minutes north for the quiet of Riverview Park. There’s a playground — empty on this warm March day — just a block down North Charles Street.

The field Williams has lived above since 1989 is flanked by a few remaining houses. “What it looks like to me is a barren desert. Right?”

Barren or not, the field is a largely city-owned expanse that, per Williams, could be enlivened with homes for residents who might otherwise be pushed out by gentrification. It’s also close to other developments that seem to be advancing.

Williams and her ally, Debbie Reed, a founder of California-Kirkbride Neighbors, are watching millions of public dollars flow into affordable apartment renovations in their communities. They’re warily eyeing the plans of would-be developers from the Mexican War Streets. And they’re cautiously participating in a planning process hatched by another community group and the Housing Authority of the City of Pittsburgh to redo the nearby Allegheny Dwellings public housing complex — an effort that will officially kick off Wednesday.

To Reed, those efforts don’t adequately consider “the low-income people that have been there when there were buildings caving in on each other and litter everywhere,” and who stayed and worked to improve the neighborhood. She said they “deserve to benefit from the process” of redevelopment.

“We just don’t want to be rolled over on it,” Reed said, “where everybody else benefits from it, besides the people that have been there through all the disinvestment.”

The block below Williams’ house, bounded by North Charles, Strauss and Cross streets, plus Irwin Avenue, includes 50 parcels. Of those, 35 are vacant, totaling 1.64 acres. Either the City of Pittsburgh or its Urban Redevelopment Authority [URA] own 31 of those parcels. Mayor Bill Peduto has lately talked about spurring development of affordable housing on city-controlled land.

In November 2019, Williams approached the URA with the concept of developing mid-rise senior housing on the site. By December 2020, her hopes had shifted to development of 10 affordable houses, for sale. That would be the first of three phases totaling 30 houses throughout the valley. 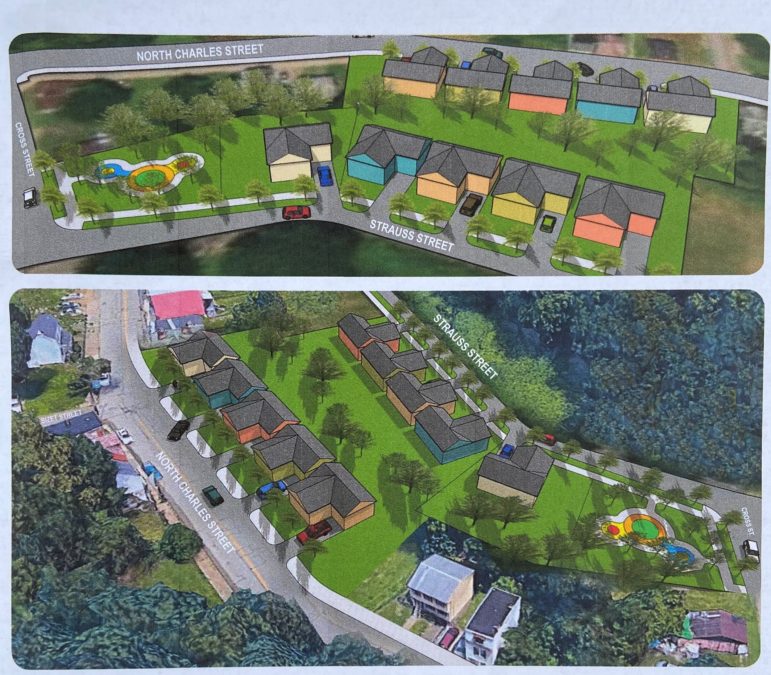 Two renderings of the Charles Street Area Council's tentative plan to build 10 houses on a largely vacant block in part of Perry South.

“This is a good opportunity to provide low-to-moderate-income people with the chance to ... create some level of generational wealth,” Williams said in an interview with PublicSource.

According to Williams, the URA gave her a 29-step flow chart describing the agency’s “disposition process,” and its staff “kept saying to us: ‘Who’s your developer?’”

The URA referred a request for an interview to LaShawn Burton-Faulk, executive director of the Manchester Citizens Corp., saying she is involved in the potential project. Burton-Faulk also serves on the Zoning Board of Adjustment and the City Planning Commission, and in November co-founded JBF Community Development Consultants LLC. She declined to detail her involvement, other than to say she’s “happy to help anybody,” including Williams.

Williams wants the neighborhood group to lead the process and acknowledges they could use some help exploring financing options. In that, she has the backing of The Forbes Funds, which assists smaller, community nonprofits.

“The work that Angela’s doing is incredibly catalytic in our minds," said Olivia Benson, chief operating officer of The Forbes Funds. She said her organization can provide as much as $100,000 in support and coaching to the Charles Street groups. She and her council “know what they want," Benson said, and The Forbes Funds wants to help them to achieve it. 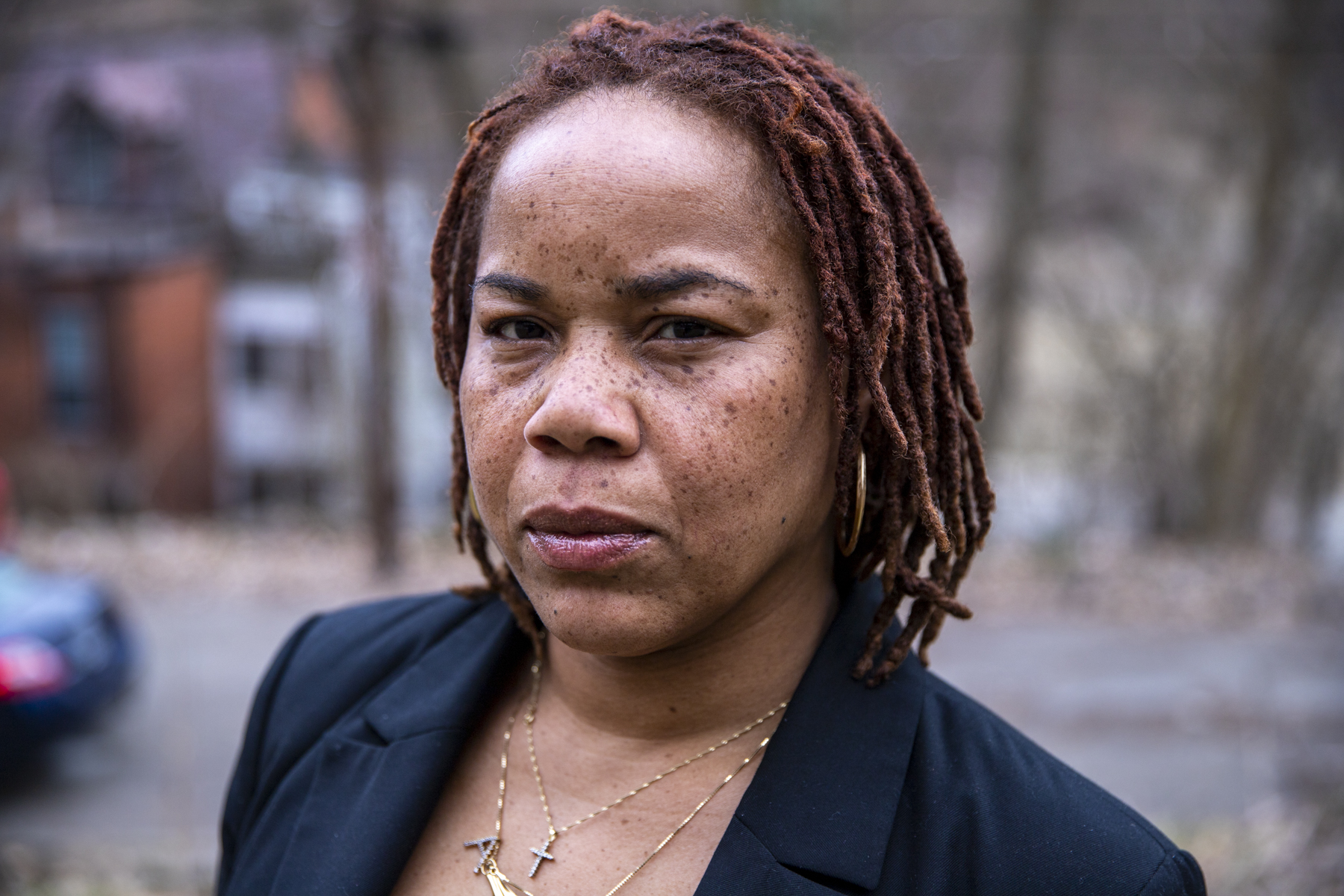 The Buhl Foundation, which focuses on the North Side, could match The Forbes Funds’ investment, and could fund home ownership preparation for Charles Street Valley residents, according to that philanthropy’s President Diana Bucco. NeighborWorks Western Pennsylvania is preparing to offer free help shopping for homes and getting mortgages to Charles Street Valley residents.

Burton-Faulk said it's possible for a smaller neighborhood group to lead a housing development effort, in light of new resources like the city's Housing Opportunity Fund. To be successful, she said, a project has to have "a unified community vision," plus partnerships that bring money and expertise.

‘A lot of fear right now’

Bucco called the North Side "the next hot community.” She said there’s concern it could get too hot, too fast.

“There’s a lot of fear right now, because a lot of people are worried about being able to stay in their homes, with opportunity going on all around them, and concern that they might be cut out,” she said, adding that residents of some of its neighborhoods feel like they “are being encroached upon, from everywhere."

Near the southern end of North Charles Street, Shawn Pippi and his wife, architect Maggie Connor, have purchased several abandoned properties on which they hope to develop a "live-work" space including housing, a tech shop and other commercial uses. They call it the Flocker Street Collaborative.

They plan to do it without public subsidy, said Pippi, who lives nearby in the part of the Central Northside known as the Mexican War Streets. He does, however, want to buy around 10 more lots owned by the city or the URA. The holdup, per Pippi: The URA wants evidence of community group support, and as yet, he doesn’t have that.

Williams views the Flocker Street Collaborative as a potential gateway for Mexican War Streets-style development “to expand into another neighborhood and to gentrify our neighborhood and, in essence, push us out."

Pippi said he and Connor have been attending Charles Street Area Council meetings, joining neighborhood clean-ups and answering questions about their plans. He said he’s happy to help the neighborhood, but doesn’t think he should have to participate in a push for home ownership. “There’s 100 lots in Charles Street Valley that are sitting empty. There’s plenty of places for single-family homes, other than this site.” 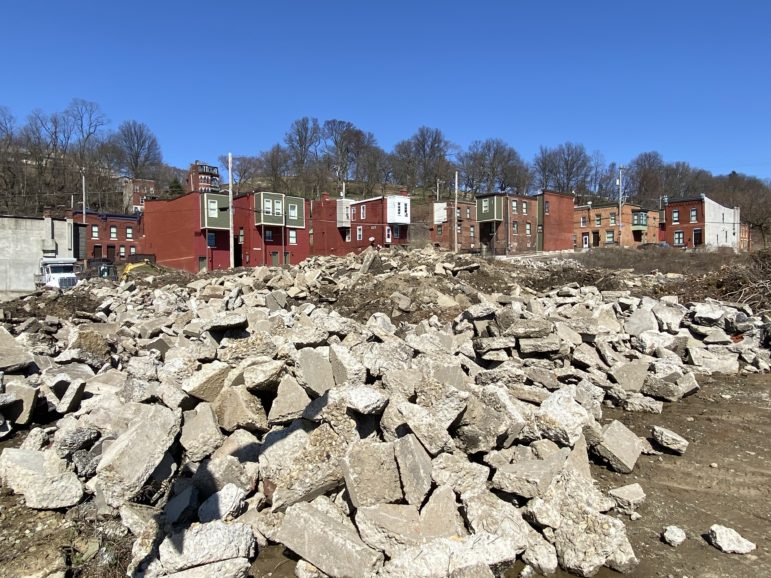 A rubble pile at the corner of Sedgwick and Kirkbride Streets, in California-Kirkbride. (Photo by Rich Lord/PublicSource)

Williams and Reed have also watched as landlord Northside Properties Residences has, since last year, worked through stages three and four of the revamp of some 325 subsidized apartments in California-Kirkbride, Central Northside and Perry South. Those two stages have involved nearly $37 million in public or tax-exempt financing.

Northside Properties Residences is run by developer, landlord and contractor Robert Mistick and his daughter Sarah Mistick. Mistick said he’s not displacing his tenants, and his financing requires that he keep rents affordable for decades.

Williams said some residents of Charles Street Valley and California-Kirkbride want a chance to move out of rentals and into houses they own, “and no one is helping us access the same public resources that Bob Mistick is able to access.”

While cautioning that it's difficult to develop small-scale affordable housing, Mistick said he's rooting for Williams and Reed. “I’m with them in terms of trying to create as much movement forward for that valley, and any way I can support that, I’m happy to support that.”

‘We’re looking out for each other’

The federal Department of Housing and Urban Development [HUD], the Fineview Citizens Council and the Housing Authority of the City of Pittsburgh [HACP] will hold a virtual kick-off Wednesday for two years of planning to redo Allegheny Dwellings and alter the neighborhoods around it.

The $450,000, federally funded planning process may lead to an application for a Choice Neighborhoods implementation grant. That could bring $30 million in HUD funds to Pittsburgh to redo Allegheny Dwellings, and to support residents and improve the surrounding neighborhoods.

“Tear down this old stuff” throughout the neighborhoods, said Cheryl Gainey, the Allegheny Dwellings tenant council president, who is also a member of the HACP board, to PublicSource. “Instead of having old, condemned, raggedy buildings and bushes and weeds growing so high, let’s get rid of all that. Let’s join, and get the Choice Neighborhoods started and move forward.”

Gainey is a recent convert to the process. At first, she was rubbed wrong because the plan to pursue Choice Neighborhoods funding wasn’t initially shared with her.

According to Deming, Fineview and Perry Hilltop initially thought a Choice Neighborhoods process could occur entirely within their borders. But their consultant WRT Design urged that other neighborhoods be included in the plan. The consultant drew a project boundary that encompassed not only Fineview and the adjacent Perry Hilltop, but also the Charles Street Valley and most of California-Kirkbride.

A map of the proposed Allegheny Dwellings Choice Neighborhoods zone, posted by the Housing Authority of the City of Pittsburgh on its website.

“I want a larger study area," including both areas that need investment and that have assets, said Woo Kim, a principal at WRT who is coordinating the planning process for the Fineview Citizens Council. "I want to be more inclusive than exclusive. I don’t know how to do community development and transformation work while just having as narrow a focus as possible.”

The citizens councils regret that they didn’t do more research, earlier on, that could have prompted them to involve other organizations from the beginning, said Fred Smith, co-chair of the Housing Working Group for both citizens councils. “And when [the consultant] said reach out, we did reach out” to Williams’ and Reed’s groups, he added.

Williams and Reed were asked to submit letters of support for the planning grant application. Instead they submitted letters of opposition, with petitions signed by scores of residents. The letters said the two neighborhoods were being invited “as an afterthought.”

“We’re just afraid that California-Kirkbride could be the dumping spot for all of the low-income housing that people don’t want in their neighborhood, so they want to put it in our neighborhood,” Reed said. “And it can’t be a healthy neighborhood with all low-income.”

Kim said that while some Choice Neighborhoods projects involve temporary relocation of residents, there is no plan to move anyone to California-Kirkbride.

Deming said that while federal Choice Neighborhoods funding would go mostly toward redoing Allegheny Dwellings, the implementation grant could help to attract other funding for for-sale affordable housing, if that’s what residents want.

The Fineview and Perry Hilltop councils have tried to mend fences with the neighborhoods to their west. Williams and Reed, along with Gainey, are now wary participants in working groups that will start to draft a Choice Neighborhoods plan.