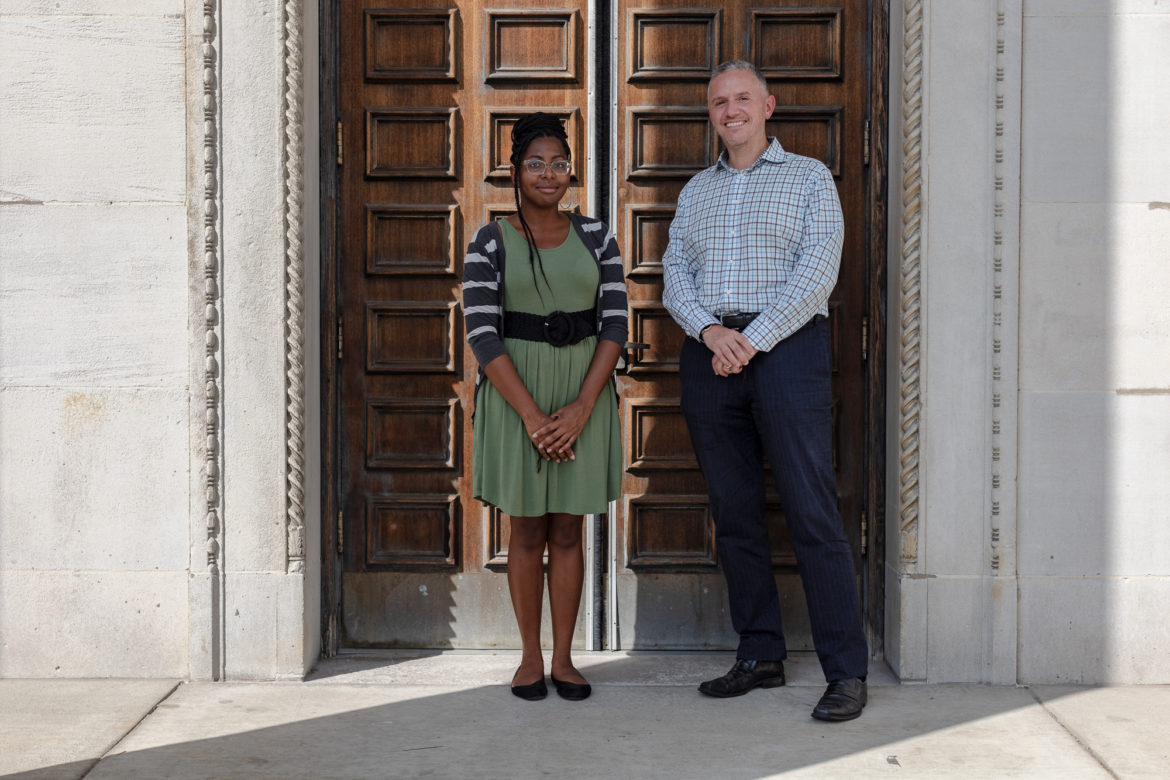 Urban Redevelopment Authority Community Development Manager Laya Mathews (left) and Chief Strategy Officer Tom Link stand in front of a Centre Avenue building being redeveloped into the ACH Clear Pathways Kaufmann Center, an example of the kind of project that could be funded in part through the Avenues of Hope allocations made possible by the federal American Rescue Plan funding to Pittsburgh. (Photo by Quinn Glabicki/PublicSource)

One month into the pandemic, Pittsburgh Mayor Bill Peduto said the city’s Urban Redevelopment Authority (URA) couldn’t depend on city help and would have to become “self-sufficient.”

Eighteen months in, his administration wrote the URA a figurative check for $74.9 million.

That sudden change of fortune for the city’s 75-year-old development agency was driven primarily by the federal American Rescue Plan Act [ARPA], which is the source of the city’s infusion to the URA.

“The truth of the matter is that the stimulus dollars that are being talked about both through the American Rescue Plan and what the federal government is working on now are just really, really big numbers compared to what I’ve seen in the past, in my career,” said Tom Link, the URA’s chief strategy officer and a 17-year veteran of the agency.

Here’s a map of the URA’s road to riches, and its implications for the future.

On April 3, shortly after the federal Department of the Treasury announced the ARPA funding, including $335 million for Pittsburgh, mayoral Chief of Staff Dan Gilman emailed officials at the URA and other agencies, asking for their ideas on how to leverage the funding.

URA Executive Director Greg Flisram wrote back suggesting a “moonshot” for the Avenues of Hope initiative.

On April 23, URA Deputy Executive Director Diamonte Walker wrote to City Councilman Daniel Lavelle suggesting that $49 million go to the URA. The agency provided Lavelle with a memo listing, as the biggest-ticket investments:

In May, after the Treasury issued new guidance on ARPA spending, the administration learned that it wouldn’t be able to use the money to shore up the city’s pension fund or bolster its reserves.

What emerged was a package, approved by council last month, that sets the stage for massive URA-guided spending over three years, including:

The ARPA money remains in the city’s coffers while lawyers for the administration and the URA negotiate a cooperation agreement on its use. City Controller Michael Lamb expects that will involve quarterly reports from the URA to the city on planned used for the money, then transfers of funds, and then verification that the spending was in line with the plan.

That’s still a huge infusion for an agency whose total budget — operating plus capital — has hovered around $23 million in recent years. The URA is still working on its 2022 budgets, which will include ARPA money but also funding from other sources, including, preliminarily, $9 million in additional funds from the city.

“It’s kind of empowering,” said Laya Mathews, a URA community development manager, “because we have a lot of different goals that we really want to achieve, but we were so limited on resources for a while that we couldn’t make progress as fast as we wanted to.”

Update (10/14/21): This story was updated to include information from the city controller on the transfer of funds to the URA.

This story was fact-checked by Amelia Winger.