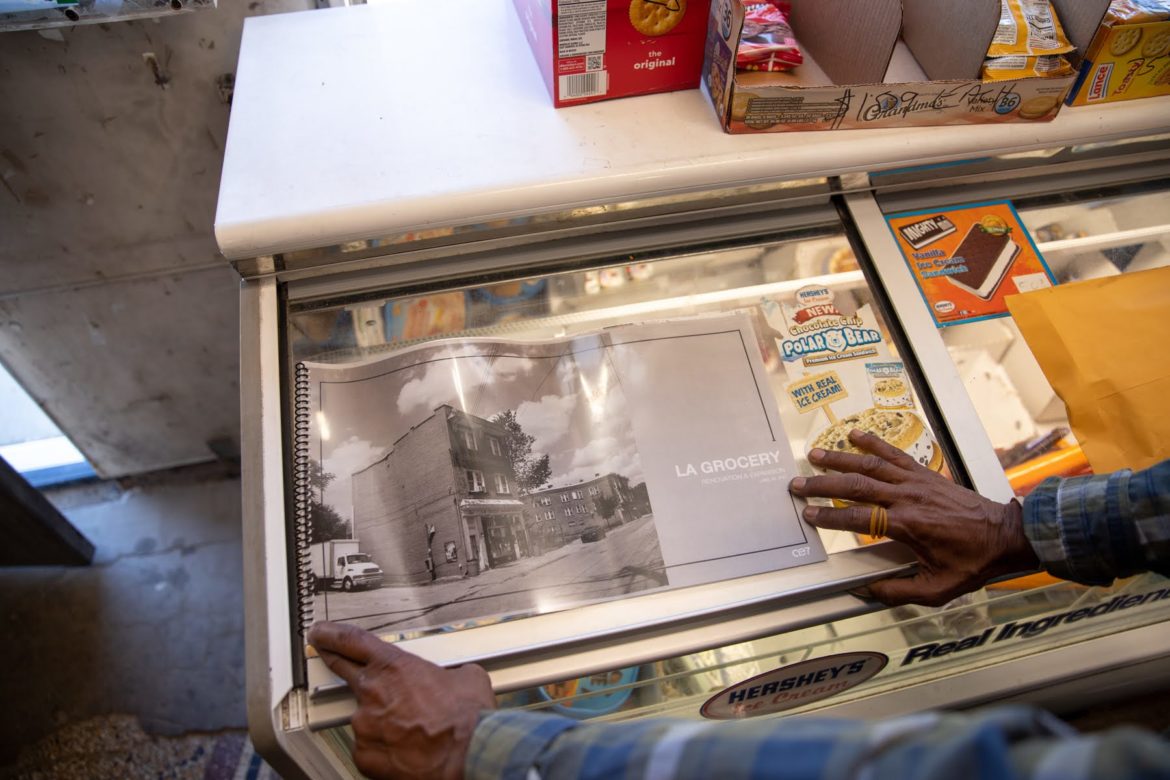 Wilbert "Bim" Moore, one of the brothers who operate LA Grocery on Larimer Avenue, shows plans for the expansion of the 30-year-old store. (Photo by Kaycee Orwig/PublicSource)

James “Dread” Duke and his brothers made it through the bad old days on Larimer Avenue, and now they believe they have every right to hope for better.

One of Duke’s brothers survived being shot outside of their LA Grocery store in the mid-1990s. “Everybody was saying, move the store,” Duke said on an early autumn day as he worked the cluttered, Caribbean-flavored shop. “I didn’t want to move the store.”

A year ago, and two blocks from the grocery, city officials and neighborhood advocates unveiled an initiative called Avenues of Hope, which they said would revive seven business districts in mostly Black neighborhoods. Tasked to run the program, leadership of the city’s Urban Redevelopment Authority admitted to the same problem that Duke has: no money to realize their hopes.

Last month, though, Pittsburgh City Council steered $7 million to the URA, from the city’s American Rescue Plan allocation, for use in the Avenues of Hope. The agency has also made Avenues of Hope a central part of its pitch when applying for state and federal grants. 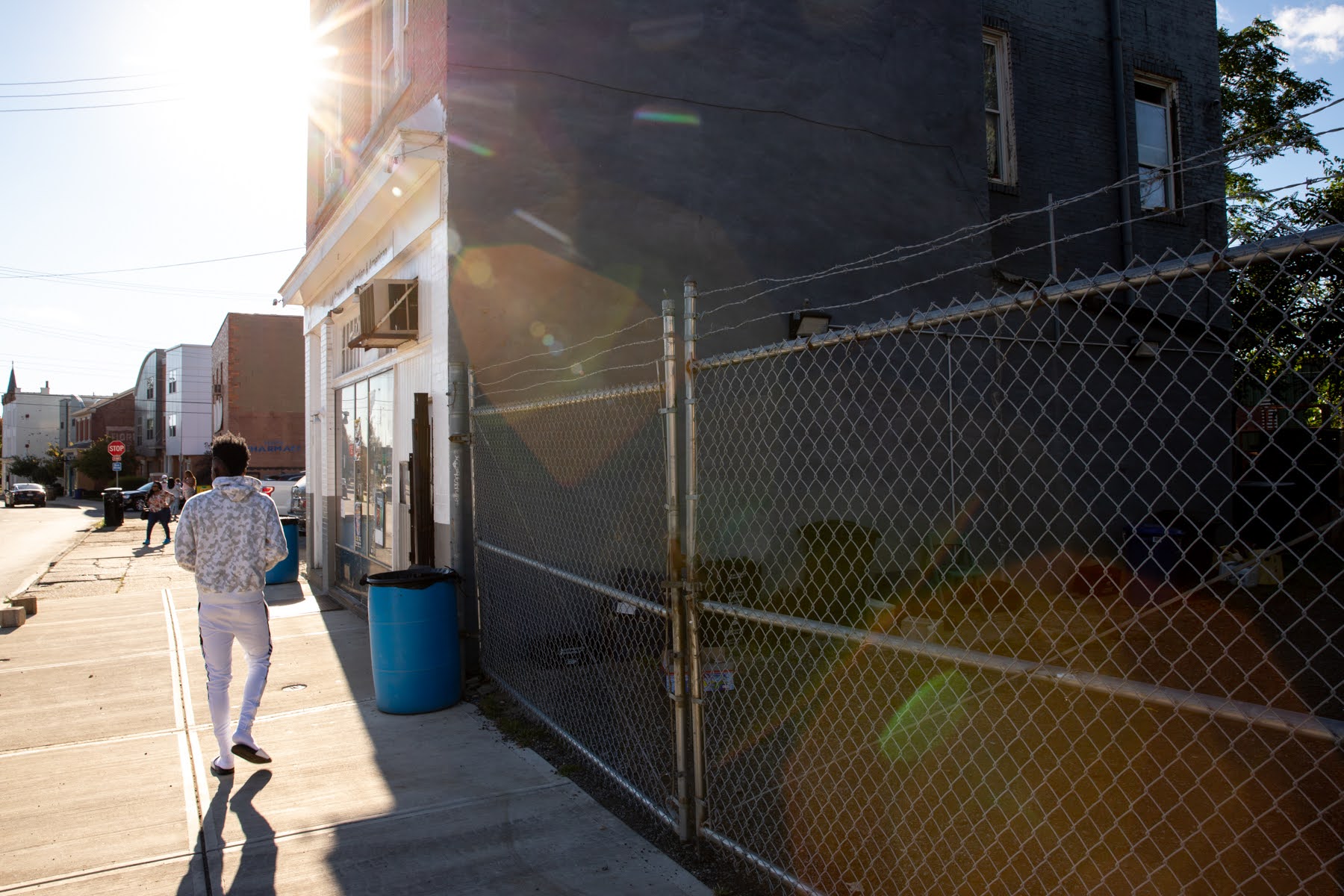 LA Grocery, on Larimer Avenue, and the fenced-in lot next to it, could be beneficiaries of the Avenues of Hope initiative to revitalize seven commercial districts in mostly Black neighborhoods. (Photo by Kaycee Orwig/PublicSource)

As a result, seven avenues – Larimer, Centre, Homewood, Chartiers, Warrington, Second and Perrysville – have become the URA’s primary focus at a time when the agency has more resources available than it has had in years.

What’s so challenging about having lots of money?

Neighborhood leaders in Hazelwood, Perry Hilltop and the Allentown/Beltzhoover area told PublicSource they were just starting to explore Avenues of Hope’s implications for their areas.  There is optimism, though, that the initiative can make a difference for long-suffering main streets.

“Everybody’s got a time,” said Duke, who has been keeping an eye on the Avenues of Hope initiative. “Hopefully it comes time for us.”

The Hill: High expectations, many options

Since Avenues of Hope was announced, Laya Mathews has spent a lot of time explaining what the program is – and what it isn’t.

“It’s not just a big pot of money,” said Mathews, a URA community development manager working mostly in the Hill District. “It’s more of a strategy.”

Part of the strategy is to give the seven avenues priority for funds flowing from existing, locally funded programs. The other part is to create a powerful brand that will set URA grant applications apart from the competition. 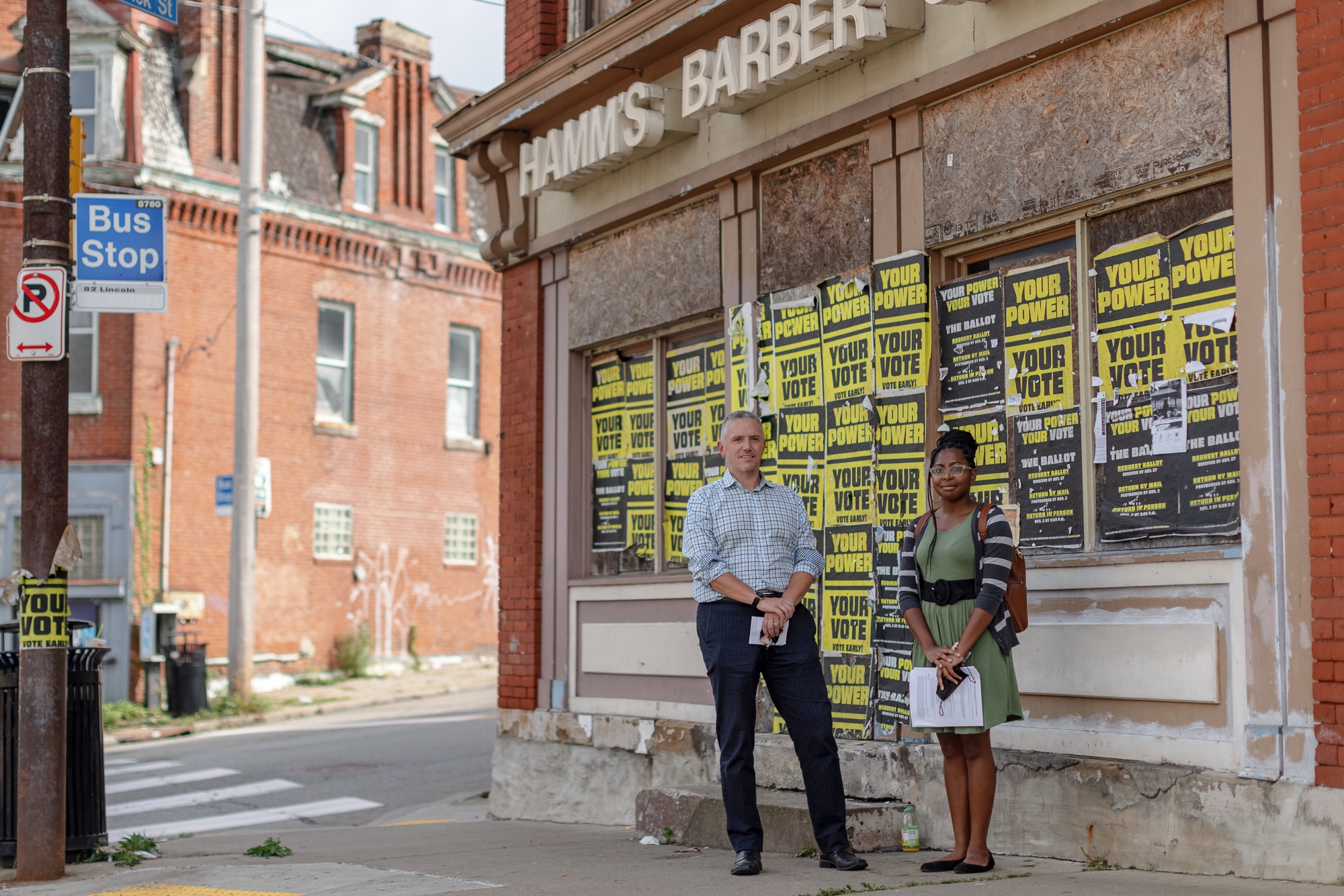 Urban Redevelopment Authority Chief Strategy Officer Tom Link (left) and Community Development Manager Laya Mathews cite the pending redevelopment of the former Hamm's Barber Shop – slated to become Big Tom's Barber Shop and four units of upstairs housing – as an example of a project that has already benefitted from funding attracted as a result of the Avenues of Hope initiative. (Photo by Quinn Glabicki/PublicSource)

Link credits the Avenues of Hope theme for financing wins both large and modest. A big example: $50 million the URA recently received in federal New Markets Tax Credits awarded as a result of an application that emphasized the seven avenues. Not as big: $500,000 in state funding for the development of a new location for Big Tom’s Barbershop in the Hill.

According to Link, the initiative changes the narrative from, say, “we’re helping a barber shop” to a bigger story of focused attention to an important part of a long-struggling community. 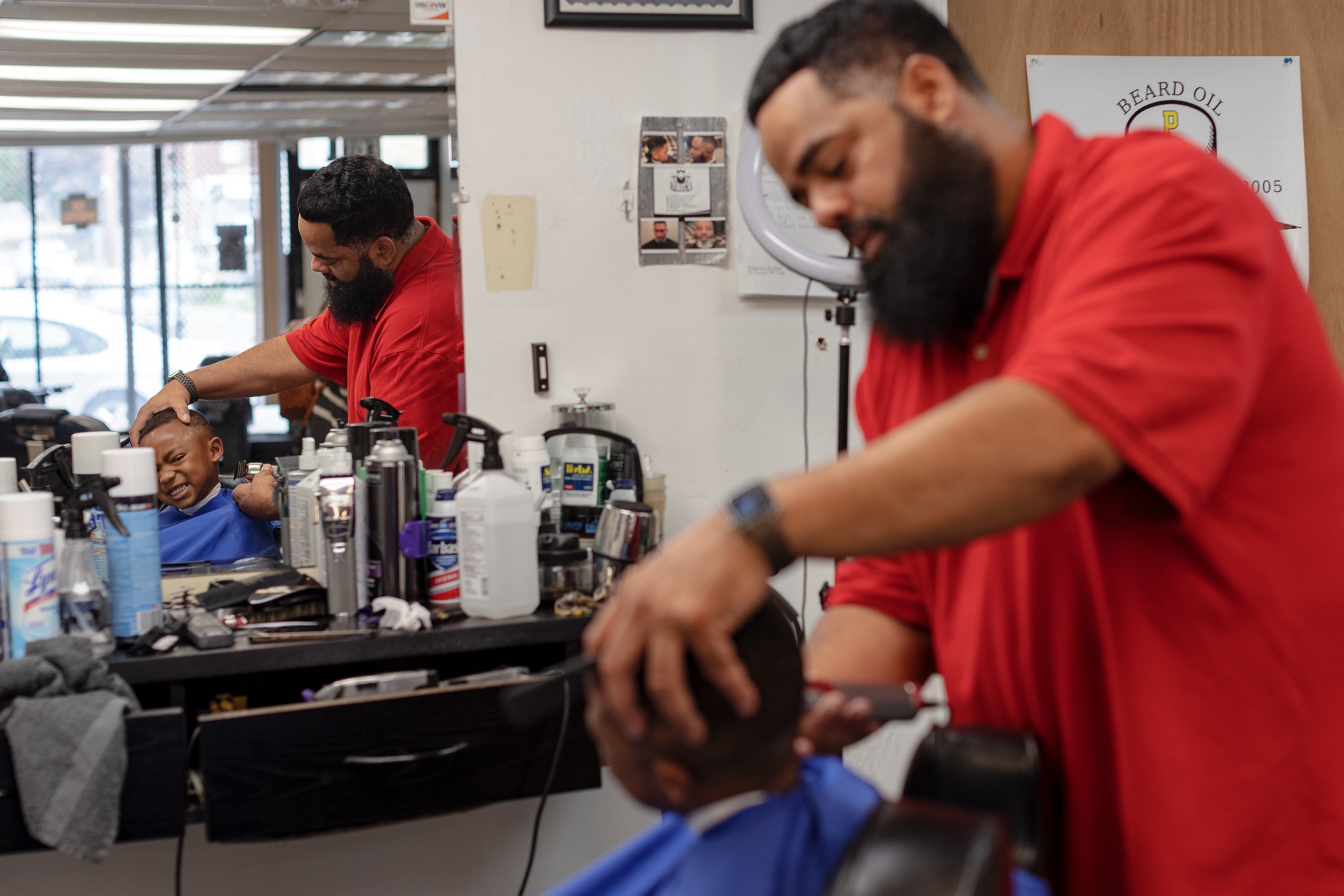 Tom Boyd, of Big Tom's Barber Shop, cuts the hair of a young client. The Avenues of Hope initiative helped Boyd and the URA to win a $500,000 grant from the state, which will help him move into another building on Centre Avenue and develop housing above his new shop. (Photo by Quinn Glabicki/PublicSource)

To date, the URA says it has made nearly $2 million in Avenues of Hope-related loans. Council’s allocation of $1 million for each avenue suggests that the numbers could soar. The URA is also counting as part of Avenues of Hope:

In the Hill, Avenues of Hope could help fill gaps in the financing for the revitalization of the Centre Heldman Plaza, the New Granada Theater, several artist-focused projects and a handful of planned new or rehabilitated commercial-and-residential buildings. 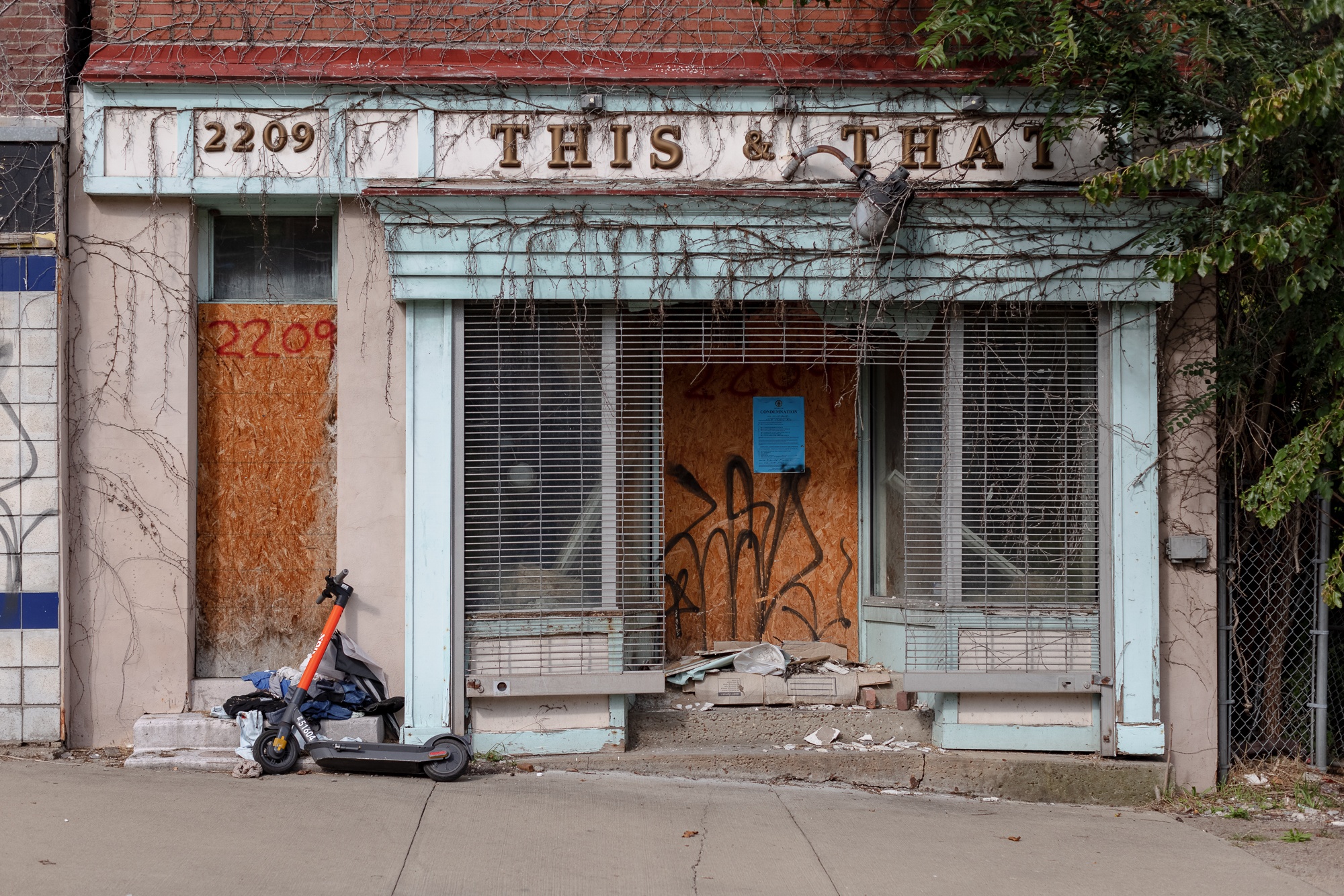 Urban Redevelopment Authority officials say buildings like this one, on Centre Avenue in the Hill District, could be redeveloped under the Avenues of Hope plan. (Photo by Quinn Glabicki/PublicSource)

Centre Avenue is well ahead of some of the other avenues, in that it has been a focus of “years of planning and hundreds of interactions with residents that led to the Hill District’s unique vision,” noted Marimba Milliones, president and CEO of the Hill Community Development Corp. In fact, she said, the Hill’s Centre Avenue Redevelopment and Design Plan appears to have inspired Avenues of Hope.

In an email exchange with PublicSource, Milliones called on the URA to be clearer and more transparent about how Avenues of Hope funds will be invested and to recognize that other communities may not be as far along in identifying their values and visions.

“The URA must always remember that their entree into Black neighborhoods, and especially the Hill, falls upon a backdrop that is always complex and sometimes very painful,” Milliones wrote. “Authentic partnerships are key for enduring results.”

Until recently, it would have been hard for the URA to find a community development partner in the western neighborhoods along Chartiers Avenue. The area didn’t have a registered community organization until the appointment, in June, of the nonprofit community service group Jasmine Nyree Homes to fill the role of liaison between residents and developers.

The year-old organization has a big job ahead of it. Sheraden, in which it is located, has shifted from “a steadfast middle-class neighborhood to a neighborhood that’s lower-middle class with a lot of working-class families and low-wealth families,” said Marque Stansberry, director of supportive services and program development for the organization. “If you go down Chartiers, you’ll see stores, or what were stores, former business establishments, that have seemed to have migrated into more residential settings.”

Link said the URA is aware that the groundwork done for Centre and Larimer doesn’t exist for Chartiers and Perrysville. The agency is planning to hire a consultant to help the less-planned avenues to catch up. And it is planning to take Avenues of Hope on the road, starting with a November community event in Sheraden.

Call it the beginning of the Avenues of Hope tour. “We’ve got to do it over and over and over again in each community,” said Link. He acknowledged that the agency has some catching up to do, after a year and a half of “not being able to go to places” because of the pandemic.

More broadly, the neighborhoods that line Chartiers Avenue need to be heard.

“The area has been ignored, historically,” Stansberry said. “This has been over a long period of time. It’s just a legacy of inequality.”

There’s a building on Larimer Avenue that locals call “the dog house” because the prior owner raised rottweilers, said Donna Jackson, chair of the board of the Larimer Consensus Group. Now a contractor is renovating it, and a would-be coffee shop operator may move in. 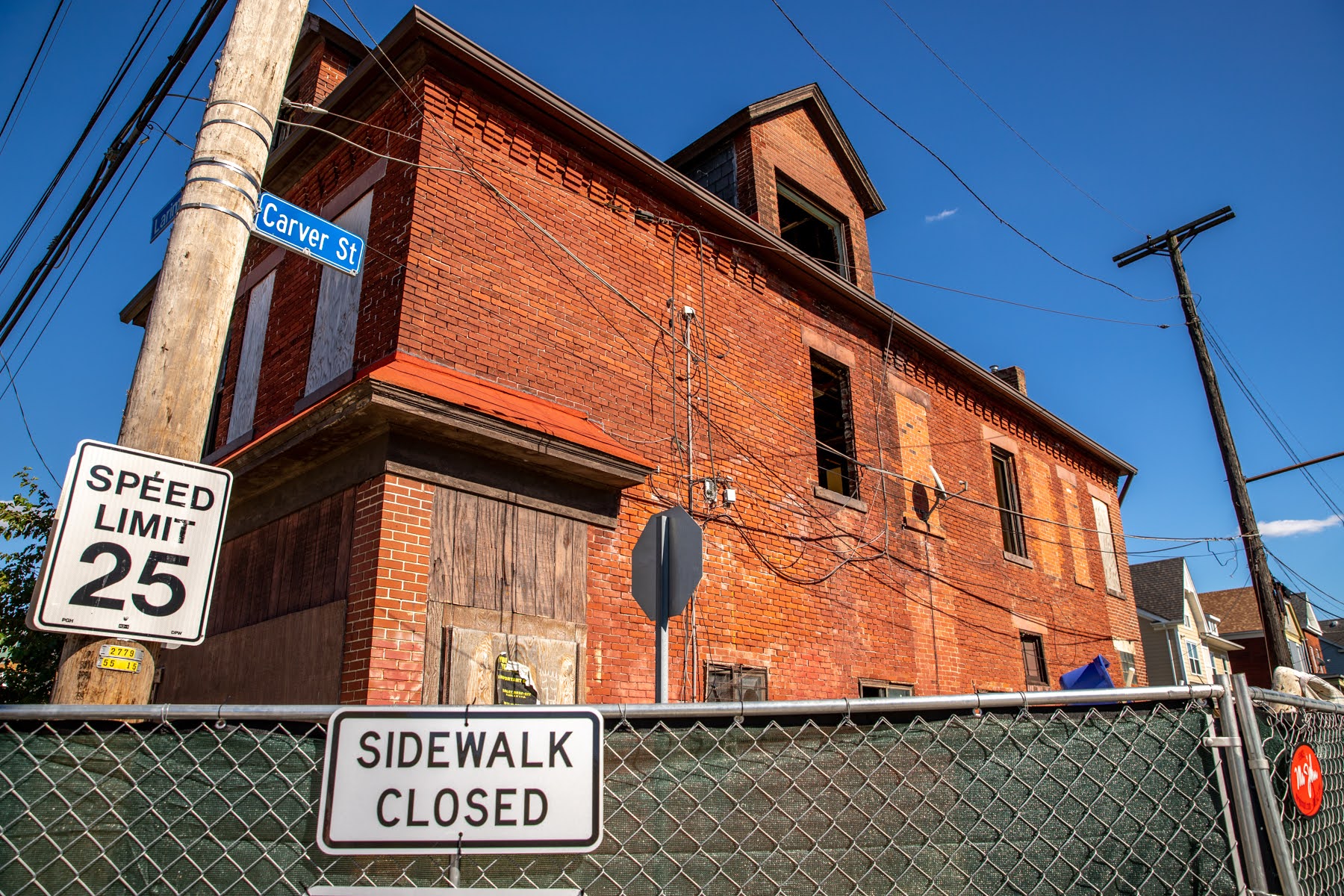 Formerly known as "the dog house," this building on Larimer Avenue is under renovation, and may house a coffee shop with pastries in the future. (Photo by Kaycee Orwig/PublicSource)

“There’s a lot of hope instilled when people see changes,” said Malik Morris, the consensus group’s community engagement manager. “Even this fence around this house, people are like, ‘Wow, they’re working on that!’”

The main drag saw almost nothing but decay for around 50 years, said Jackson. Then the URA and the Housing Authority of the City of Pittsburgh won a federal Choice Neighborhoods grant to rebuild the neighborhood’s affordable housing. That’s more than half done, but there’s still just three tiny stores on Larimer Avenue.

In recent years the neighborhood’s residents have had lengthy discussions about its future, according to Jackson and Morris. Their wish list includes a dentist, a doctor, a bank, an attorney, a cleaners, a bakery, a business incubator — but most of all, a place to eat. 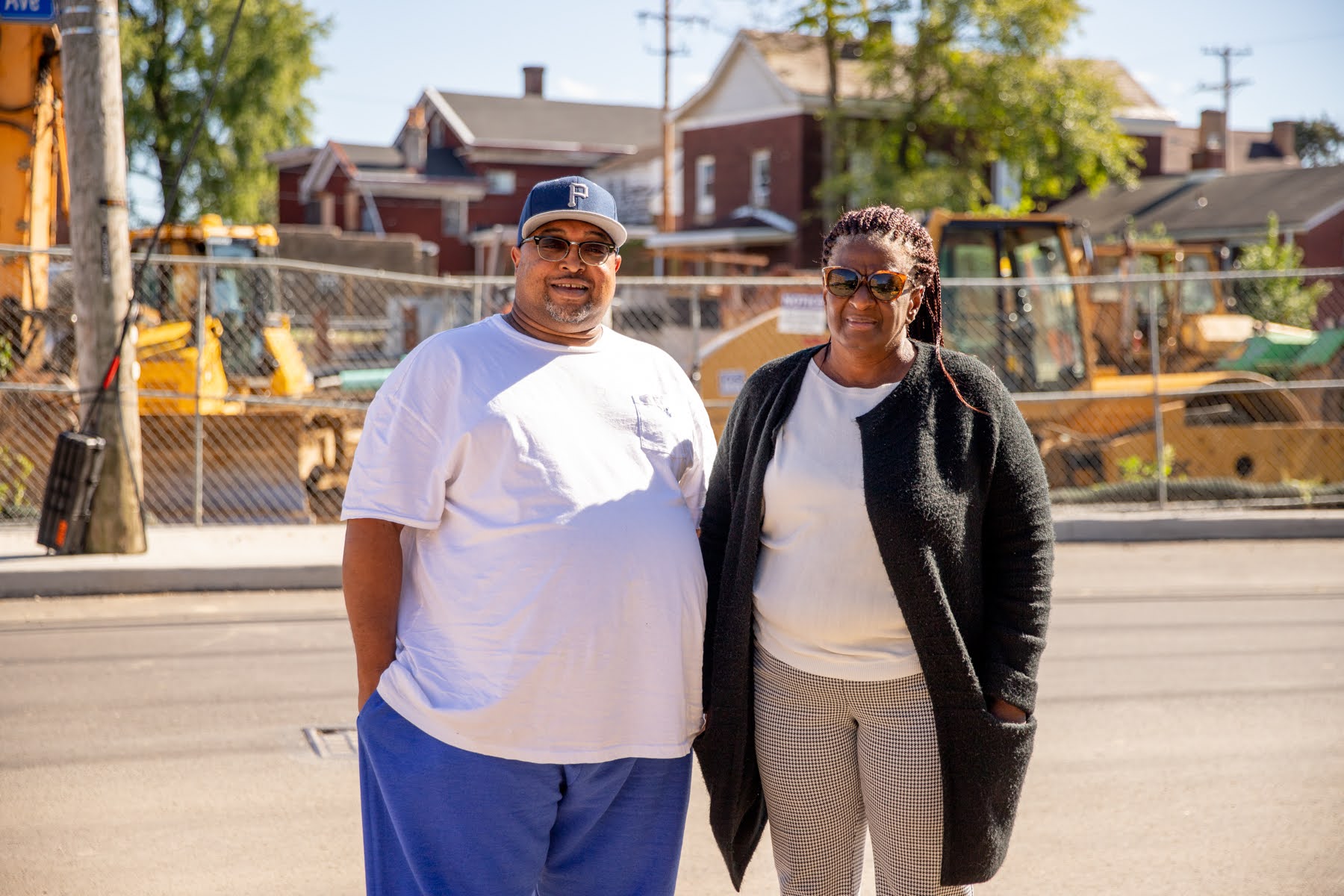 Malik Morris (left), the community engagement manager of the Larimer Consensus Group, and Donna Jackson, the group's board chair, stand on Larimer Avenue in front of the site of ongoing housing construction funded by a federal Choice Neighborhoods grant. (Photo by Kaycee Orwig/PublicSource)

What kind of eatery, and where? Questions swirled at a Sept. 30 virtual meeting of the consensus group’s Commercial Corridor Committee. Full-service restaurant or pastry cafe – or both? Would more than one dining option create critical mass, or cannibalize each other? Where would diners park?

Tough questions. Mathews said the URA’s new resources often result in “a very delicate dance between understanding what the [community’s] needs are and also: Is it feasible? How do we make it feasible? … How can we make sure it works and that it’s sustainable?”

For Larimer and the businesses considering the neighborhood, the dance is easier than it was a few years ago. Jackson noted that Larimer is on the East End’s redevelopment frontier, with vacant land, an engaged population, low rents and new resources now including Avenues of Hope. “Right now,” she said, “to me, we’re the sweet spot.”

This story was fact-checked by Amelia Winger.