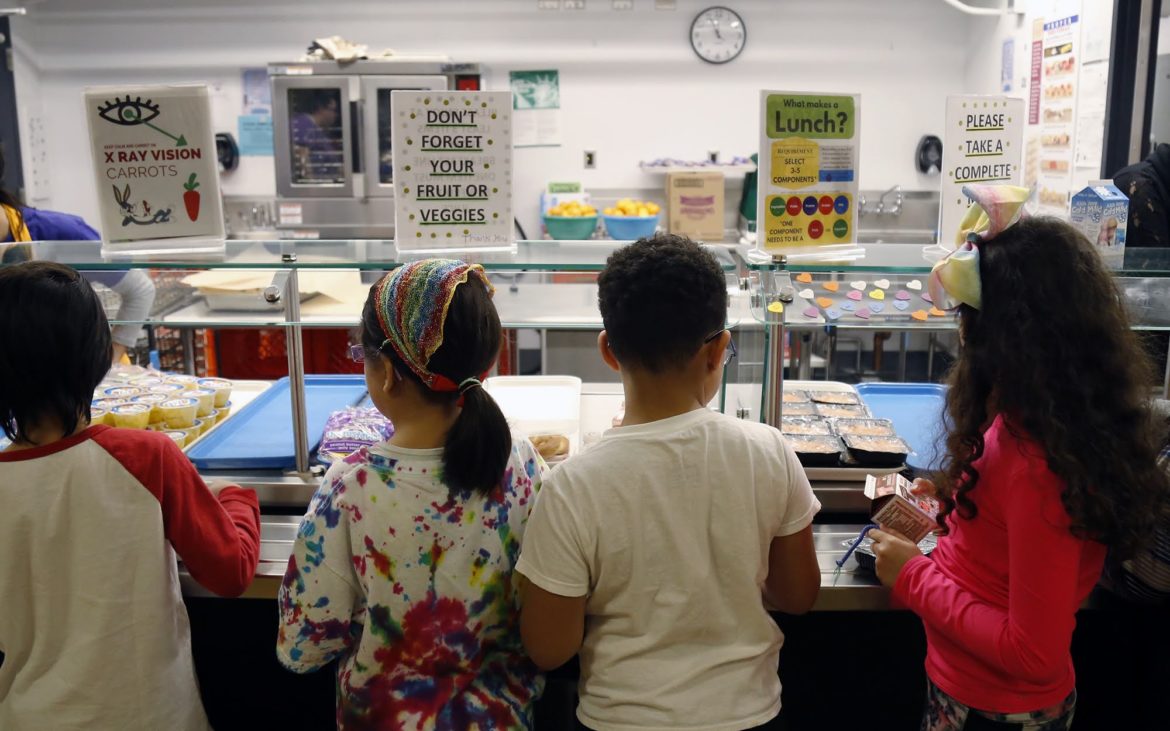 Students make their way down the lunch line at Phillips K-5 school on Feb 19. (Photo by Ryan Loew/PublicSource)

Voters across Allegheny County narrowly rejected a ballot initiative on Tuesday that would have raised property taxes by a quarter mill to funnel $18 million annually to children’s programs.

With 97 percent of precincts reporting, preliminary results showed county residents voted 51.8 percent to 48.2 percent to reject the tax hike that would have created the Allegheny County Children's Fund. The rejection came despite a months-long, million-dollar campaign promoting the fund that was financed largely by local nonprofits.

The initiative would have created a new pot of county money to be distributed by a new county department. The money would have been used for “early childhood learning, after school programs, and nutritious meals,” according to the campaign website.

“We did everything that we could humanly do to take this question...to the people of Allegheny County,” said Patrick Dowd, executive director of Allies for Children and the leader of the campaign. “And although we didn't pull this through, we had half the people in the county say, ‘You know what? This is important. This is a priority. This is something that we should invest in.’”

The proposed 0.25-mill increase in property taxes would have amounted to $25 for each $100,000 of assessed value of property — about $33.60 a year for a typical Allegheny County homeowner.

“When the public speaks through a vote, I believe in those things.”

The ballot initiative was not taken lightly by either supporters or opponents of the fund.

Supporters felt the fund would have been a crucial safeguard against the potential of future funding cuts by the state Legislature.

Opponents criticized the fund, citing a lack of transparency and accountability in the way the funds would be distributed and suggested the nonprofits who provided financial support to the campaign stood to benefit from the fund.

Special education advocates worried that students with disabilities would lose the protections they have under federal law if the fund carried out programs outside of school districts.

“I think people want to vote for something that is transparent, democratic and a solution that involved the public,” said Pam Harbin, co-founder of the Education Rights Network. “This did not involve the public. I worked my polls [in the 14th Ward] today, and the people at my poll were really questioning the transparency part of it because there are so many questions unanswered."

Harbin added: "We definitely want to raise money for kids, but there are real problems in our community that require real solutions. They didn't look at the barriers to kids in programs. They said let's just raise money." 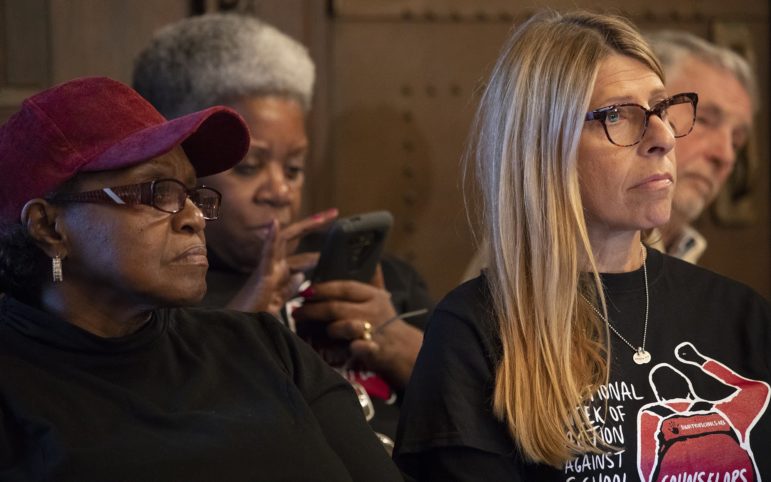 The campaign, with a formal name of “Our Kids. Our Commitment. Allegheny County Children's Fund Initiative,” received more than $1,058,000, mostly in large contributions from local nonprofits that serve youth. As of the most recent campaign expense report filing on Oct. 26, the only for-profit donor was PNC Bank, which contributed $75,000.

That report showed the campaign spent $971,420, mostly on advertising efforts including radio and television spots.

The campaign goal of increasing early childhood, after school programs and nutrition options for children received no vocal opposition. But the process that fund organizers publicized on the campaign’s website, in ads and at community meetings drew critics who said there were not enough details about how and where the money would be spent.

Allegheny County Controller Chelsa Wagner, who had been critical of the campaign, said she thought voters "got it right" on Tuesday.

"In terms of the larger community, [the vote shows] there's that importance of speaking to the community and gauging the community and having something that's truly a grassroots effort," she said, noting that the campaign didn't answer critical questions about where the funds would go if the initiative passed.

Others questioned how the initiative would intersect with school districts and social service agencies already providing those services in the county.

Pittsburgh school officials said no one from the campaign spoke with them about whether the district, which operates programs in early childhood, after school and free meals for students, would be eligible for money from the fund, if approved.

"Children's programming, whether education or food or preschool or health services, are all basic governmental services,” said Ira Weiss, solicitor for the Pittsburgh Public Schools. “School districts are responsible for them. Municipalities are sometimes responsible for them to some degree and so are counties. I think the way to do this is to work cooperatively with those agencies to secure additional funding at the state level."

Dowd, a former Pittsburgh school board member and city councilman, in a previous interview with PublicSource pushed back against charges that the nonprofits who provided financial support to the campaign stood to benefit from it. He said only a few of the groups who supported the campaign would qualify for funding from it. He did not specify which organizations.

And on Tuesday, Dowd promised that he and the other groups that helped lead the campaign would continue to push for expanded access to pre-kindergarten and nutritious food for children across the county. While he said he wouldn’t be leading another ballot initiative campaign, he indicated he’d find other ways to advocate for children's needs.

“We’re not going to run another one of these things," he said. “When the public speaks through a vote, I believe in those things.” But, he added, “In the end, we’re going to have to find another way. We’re going to get up tomorrow morning, I’ll be at my desk...and we’ll be trying to figure out what’s our next option.” 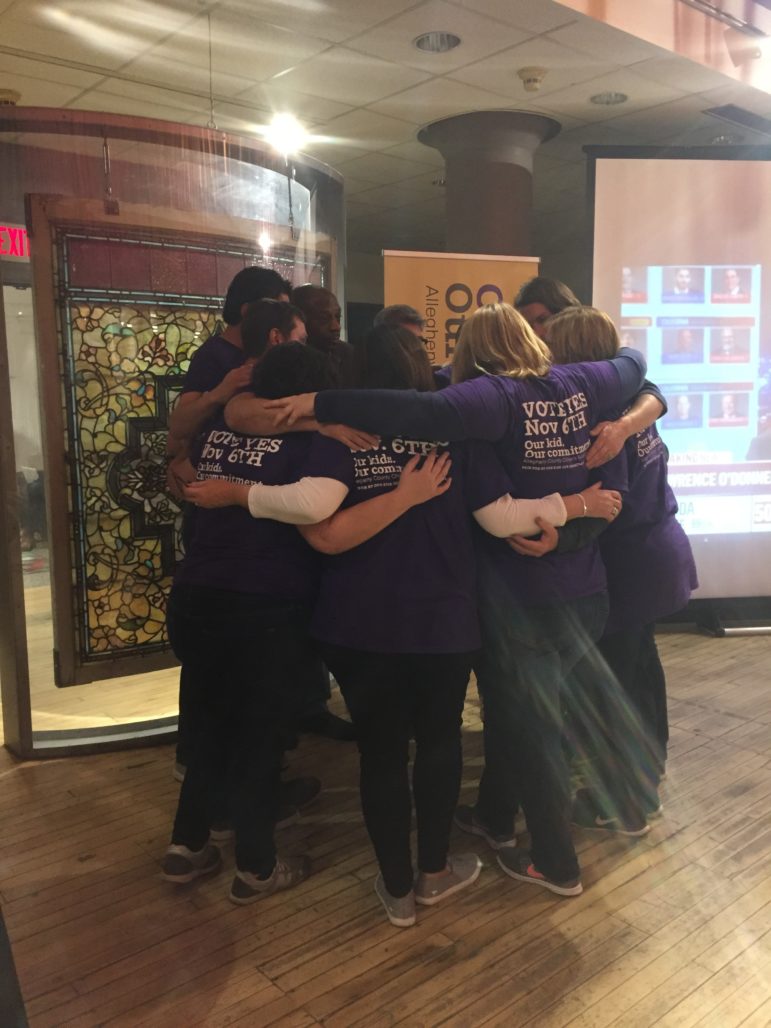 A group that helped to run the children's fund campaign huddle at Children's Museum in the North Side of Pittsburgh after the loss on Tuesday night. (Photo by J. Dale Shoemaker/PublicSource)

If voters had approved the tax hike to create the fund, an Office of the Allegheny County Children's Fund  would have been created and supervised by the county manager. Under the proposal, county council was expected to pass an ordinance creating an advisory commission made up of volunteers who would advise county officials on how to best spend the funds.

To get the referendum on the ballot, the campaign, collected signatures from 63,499 county residents with the help of paid organizers. Pittsburgh Mayor Bill Peduto voiced support but said he’d like to see the children’s fund start as a city initiative before spreading to the county. County Executive Rich Fitzgerald supported the idea of a children’s fund, but not a tax increase.

The children's fund campaign received the bulk of its financing from larger donors. The YWCA Greater Pittsburgh, PUMP and the United Way of Southwestern Pennsylvania donated the most, giving $130,000, $152,000 and $180,000, respectively, according to the Oct. 26 filing.

Other large donors included Trying Together, which gave $80,000, as well as the Mentoring Partnership of Southwestern Pennsylvania, which gave $75,000. The campaign also received about $1,000 in in-kind services from Allies for Children during the most recent reporting period, which covered June 5 through Oct. 22.

Voters approached the polls Tuesday with varying opinions about the fund and were sometimes met by representatives lobbying for or against it.

At the polling place at John McMillan Presbyterian Church in Bethel Park, a man handed out cards that said “Vote YES for our kids,” while a woman provided voters with a flier from the Allegheny Institute for Public Policy that urged “Vote NO!” on the children’s fund.

At the Jewish Community Center [JCC] in Squirrel Hill, Abby Kreckel was hopping on her bike with her two daughters in tow to head to her polling place several blocks away. Her eldest, 4, is starting kindergarten next year but Kreckel said she planned to vote against the children's fund  initiative. She had concerns that the fund would primarily finance private organizations and programs and she prefers the money stay public. She plans to send her daughter to a public kindergarten, she said.

Kreckel, 26, also said she had concerns about creating unnecessary bureaucracy.

“It creates a bit of a duplicate agency that has a lot of private hands in it,” she said. “I think it’s a good idea but I’m skeptical.”

Matthew Thorne, however, a 36 year-old designer, said he was voting for the fund.

“They could have quadrupled the number [of the tax] and I would have voted yes,” he said after voting at the JCC.

Thorne’s wife teaches pre-kindergarten and the two are expecting a baby.

“There’s just no conversation to be had,” he said. “Who votes no on that? It’s ridiculous.”

That’s a position David Mahler, 74, from Squirrel Hill, agreed with. He said making sure kids get cared for is important, noting that “many of the problems in this country” could be solved if everyone was more educated, a process that starts when kids are very young. He added that the children's fund  was necessary because “there isn’t an easy way to do this through normal funding channels.” 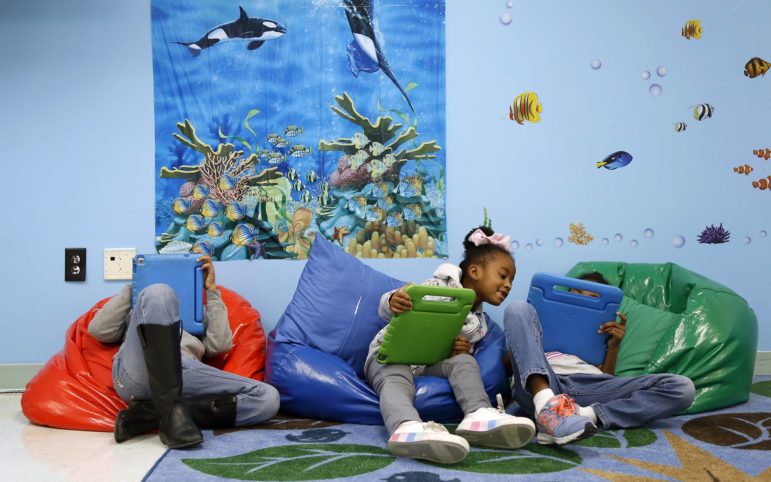 Across town, at the Richard Caliguiri Allentown Plaza along Warrington Avenue, Leslie Springs was also a solid yes vote for the children's fund . Springs, who is 53, doesn’t work anymore but volunteers her time as the president of the Plaza’s tenant council and with 412 Food Rescue and other groups. She said the kids “really need this.”

“I think kids need the opportunities to be successful,” she said. “When it comes to kids, I’m all for it. They’re the most important ones.”

Another man who voted at the Plaza apartments but declined to give his name, said he voted against the measure because he was against an increase in property taxes.

“They should get the money from elsewhere besides my home taxes,” he said. “I pay a lot of money here.”

In Mt. Lebanon, Andres Builes, a father of three, voted yes on the children's fund  ballot initiative. He owns a home and said the tax increase didn’t seem too big of a deal.

Builes, 42, said he supported the initiative because he supports other programs for kids, including the public schools. Even though critics raised concerns about how the $18 million would be spent, that didn’t bother Builes to much.

“We can argue on all sides about what the money will go to,” he said. But, “They need some flexibility.”

Shelley Myers, also of Mt. Lebanon, said she voted yes on the initiative because she sees firsthand the needs of children in Allegheny County. A pediatric audiologist at the Children’s Hospital in Lawrenceville, Myers, 46, said she works with kids from all neighborhoods and know that some are food insecure and don’t have access to the kinds of education and programs other kids do.

“I’ve worked with kids who don’t have access to things they need,” she said, adding, “it’s not a huge amount of money.”