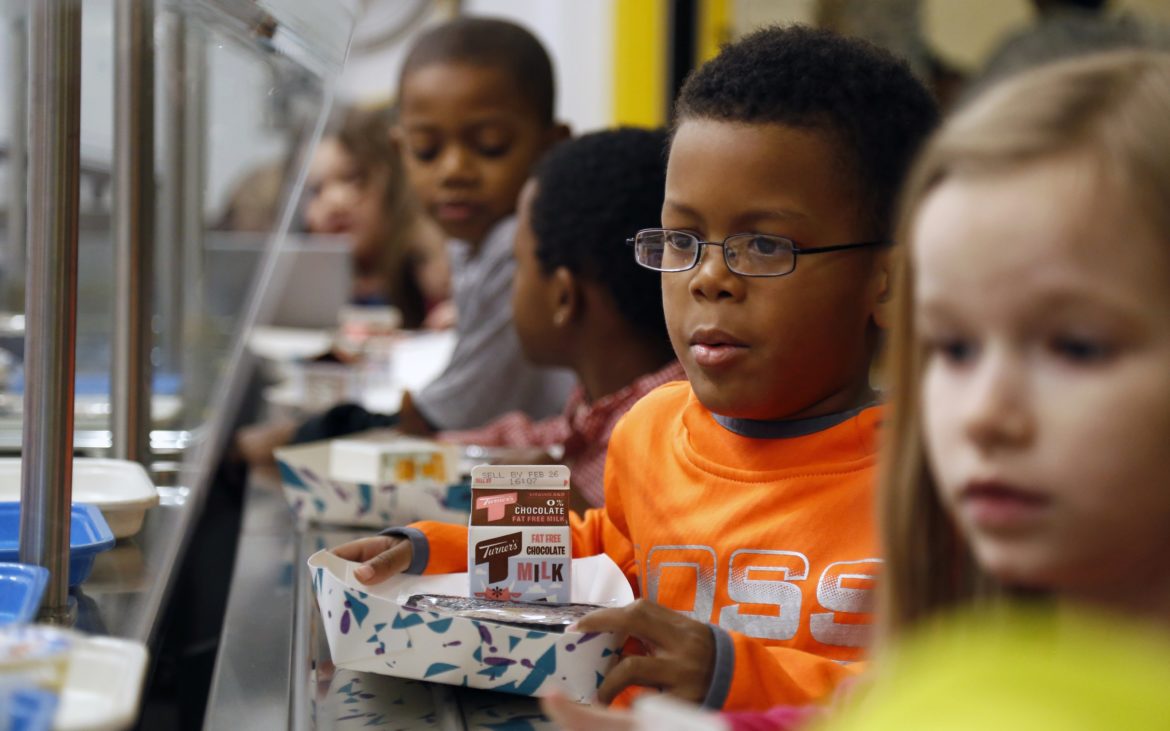 Daelin Johnson, then a kindergartener at Phillips K-5 school, makes his way through the lunch line with fellow students on Feb 19. (Photo by Ryan Loew/PublicSource)

The campaign to create the Allegheny County Children's Fund has received more than $1 million in donations from 10 local organizations. Campaign organizers have spent most of it, primarily on advertising, consulting and voter outreach, according to a campaign finance report filed Friday afternoon.

On Nov. 6, voters will be asked to choose ‘yes’ or ‘no’ to a question on their ballots about the children’s fund. If passed, the county will implement a tax increase to go toward the children’s fund. The revenue would pay for “early childhood learning, after school programs, and nutritious meals,” according to the campaign website.

The filing shows that campaign contributions to advance the ballot initiative now total $1,058,000, mostly in large contributions from local nonprofits that serve youth. The ‘Our Kids. Our Commitment.’ campaign has spent $971,420, leaving $86,580 left in the bank.

As voters prepare to head to the polls, questions about how the children's fund would operate remain. Among the questions are who would manage the nearly $18 million pot of money that the new tax is expected to generate and which organizations would be eligible to receive those funds. The children's fund ballot initiative would raise property taxes in Allegheny County by 0.25 mills — or $25 for each $100,000 of assessed value. It would also create a new county department to manage the money. The ballot initiative dictates that an advisory commission would be appointed to help decide how the money would be spent and that final decisions on fund allocation would go through county council and the county executive.

You can read the full filing here:

The children's fund campaign has received a bulk of its financing — $703,000 — over the past four months, according to Friday’s report. The YWCA Greater Pittsburgh, PUMP and the United Way of Southwestern Pennsylvania have been the three largest donors, giving $130,000, $152,000 and $180,000, respectively, according to Friday’s filing. Other large donors include Trying Together, which gave $80,000, as well as PNC Bank and the Mentoring Partnership of Southwestern Pennsylvania, with each giving $75,000. The campaign also received about $1,000 in in-kind services from Allies for Children during this most recent reporting period, which covers June 5 through Oct. 22.

While prominent nonprofits stand behind the campaign, the effort has also drawn scrutiny. Critics include Pittsburgh Public Schools solicitor Ira Weiss and Education Rights Network activist Pam Harbin who previously told PublicSource they suspect the same nonprofits contributing to the effort could stand to gain funding from it.

Patrick Dowd, executive director of Allies for Children and the leader of the campaign, pushed back against the criticism. Of the groups supporting the effort, Dowd said only a few of them would be eligible to receive money from the fund.

“There's nothing untoward about how [the campaign] is structured or how [the fund] would be structured if it's passed by the voters on Nov. 6,” said Dowd, stressing that the campaign has been structured to avoid conflicts of interest.

When asked directly if some of the organizations that donated expected a return on their monetary investment, Dowd responded: “Are you serious? This is a public fund that would be under public control. Who's going to make those decisions? Will any of the 10 of us make those decisions?”

Decisions will be made by elected officials in concert with public employees and a citizen advisory commission, he said.

“At United Way, we work with organizations across the region. We hear about and witness the power of these programs to make the difference between school failure and success and a future filled with hope,” said Bob Nelkin, president and CEO of the United Way of Southwestern PA, in a written statement.

“We have supported the Our kids. Our commitment. initiative because we know from research and those we work with daily that early learning, after school programs and nutritious meals are services that are critical to the success of our children. Through our United for Children initiative, it is our goal to work with partners to develop preventative strategies that will help our local kids build character, succeed academically and lead healthy lives. The children's fund will get us closer to these goals.” 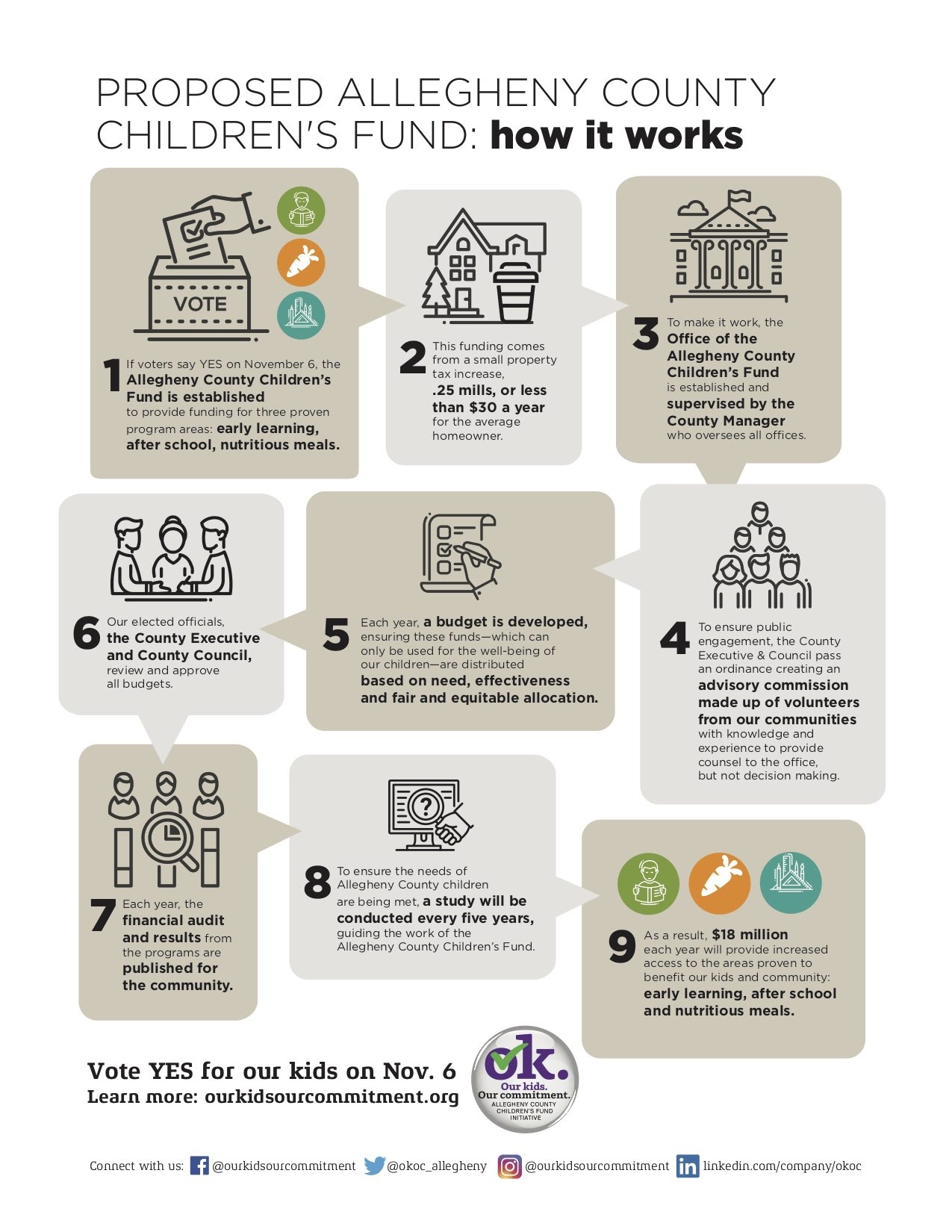 Courtesy of Our kids. Our commitment. Link to site: https://ourkidsourcommitment.org

Colleen Fedor, executive director of the Mentoring Partnership of Greater Pittsburgh, said the group’s financial contribution “is a one-time investment… It’s around a long-term solution to a problem that has continued to grow.”

“This is the right thing to do. Kids are never first on the list of decision making and we want that to change,” Feder said.

Cara Ciminillo, executive director of Trying Together, said her organization donated to the campaign in order to ensure a future funding stream that would not be dependent on state and federal budgets.

“It’s been painstakingly slow to get increases in state and federal funding levels,” Ciminillo said. “This fund is a chance to get a sustainable revenue stream independent of [government] administrations.” She said the county is short 6,700 spaces for preschool.

Ciminillo said because Trying Together is an advocacy group it would not get money from the fund.

PUMP CEO Brian Magee said the goals of the children's fund match some of PUMP’s goals , including equitable access for children to safe recreational facilities and quality food.

“We think this is a great investment in our kids that will put them on a path to success,” Magee said.

Allegheny County Controller Chelsa Wagner also has serious concerns about the initiative. While she said she supports funding for children’s programs, she criticized the campaign for pitching itself as a grassroots effort while collecting more than $1 million in large donations. She added that there’s never been a county council meeting or public hearing where the need for such a fund was discussed.

“This is the furthest thing from a grassroots campaign,” she said. “You can’t take people’s money and then say you’ll come up with a plan for how to spend it later. That’s not how government works.”

Dowd said there was “nothing unusual” about working out “administrative details” after the fact. 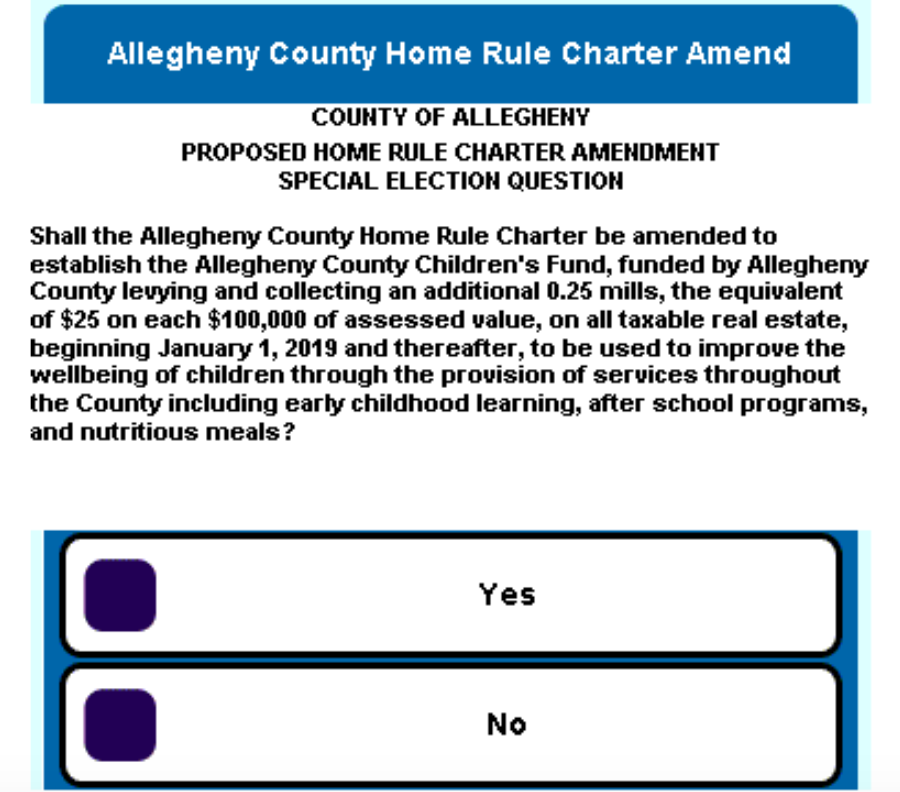 The Pennsylvania Interfaith Impact Network [PIIN] released a statement, criticizing the effort for its lack of detail on how the fund’s advisory commission would be appointed or how the funds would be overseen.

The ERN statement said it opposed the children's fund over concerns that “historically marginalized children, including black, brown and disabled children” would lose their rights under federal law if money from the fund goes to non-school entities.

“Children whose rights are protected by enforceable state and federal laws lose these protections during after-school and PreK programs unless they are administered by the public school system, a condition that is not guaranteed under this referendum,” the ERN statement said.

Voters will get the last word on Election Day.

4 thoughts on “Children’s Fund campaign got more than $1M. Here’s what the final campaign finance report before Election Day shows.”