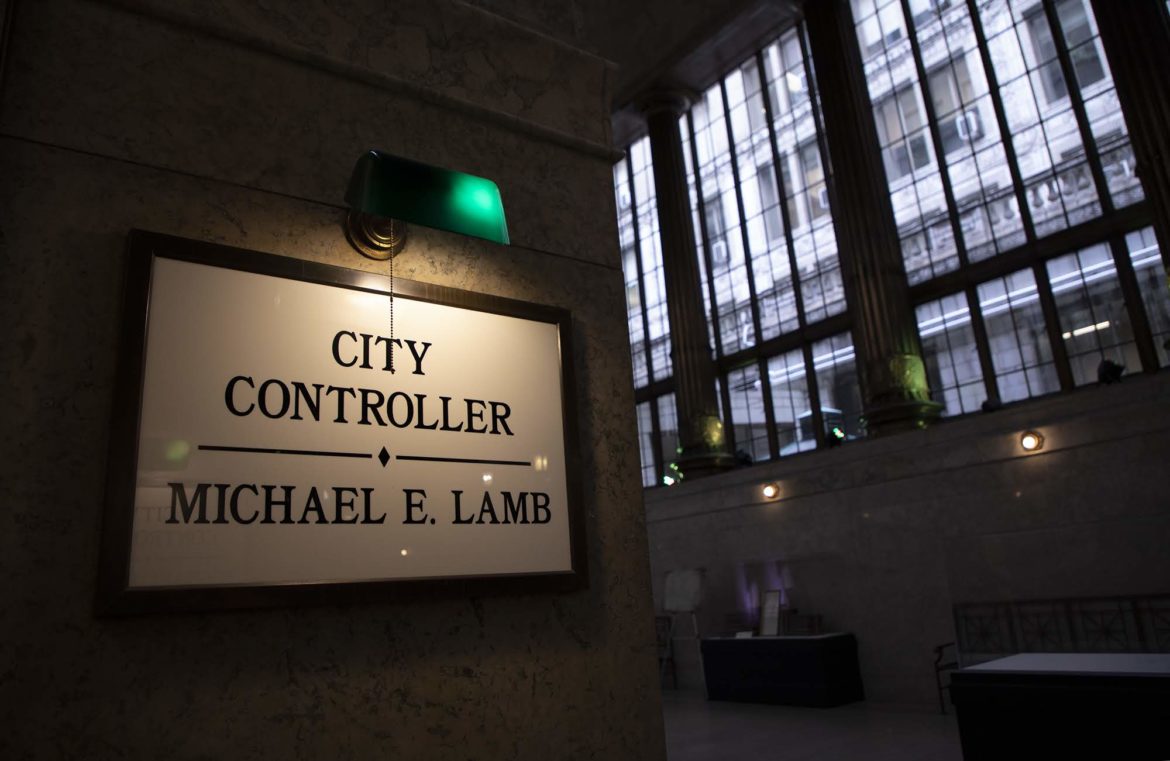 Pittsburgh City Controller Michael Lamb is “putting up a warning flag” about the city’s use of piggyback contracts, he said as his office released an audit of city purchasing on Thursday.

Lamb made clear that his office’s audit, which looked into practices in the Office of Management and Budget’s [OMB] Bureau of Procurement, did not find any fraud or corruption but said the city’s current practices with piggyback contracts are troubling.

“We just see the opportunity for some waste and some abuse,” Lamb told reporters at a press conference Thursday. The audit covered the years 2016 through 2018.

Lamb pointed to the city’s contract with Axon Enterprises, which supplies city police officers with body cameras. PublicSource previously reported that a police commander involved in the deal had financial ties to the company. Lamb said those types of arrangements between “salesmen” and city employees can be problematic.

Salesmen provide "an attractive sales pitch to government employees who are overwhelmed and have a lot going on,” he said. “So we want to make sure we're not falling into that trap.”

Despite concerns raised in the audit, Lamb praised OMB for its efforts to improve contracting practices in the city.

In a response letter to Lamb’s audit, OMB Acting Director Jennifer Olzinger sought to clarify several points. She wrote that OMB seeks three bids before using a piggyback contract through the Pennsylvania Costars system — an online portal for public agencies to find and use piggyback contracts. City spokesperson Timothy McNulty said in an email Thursday that neither OMB nor the mayor’s office would comment beyond Olzinger’s letter.

Another sticking point between Lamb and Olzinger was whether or not to release the documents that show how the city decided to award a contract to a company.

Currently, the public is allowed to see the bid documents and the final contracts the city enters into, but residents can’t see the list of employees who chose which company to contract with or the disclosure forms for those employees. Additionally, the public can’t see the score cards used to make contracting decisions. Olzinger wrote that those documents aren’t allowed to be released to the public under Pennsylvania’s Right-to-Know Law [RTKL].

“Pittsburgh’s RTKL currently prohibits the posting of ‘internal deliberation materials’ of which scorecards and committee lists are considered to fall under,” she wrote.

Lamb said her characterization was “just inaccurate,” adding that because the RTKL allows the city to withhold those documents doesn’t mean it’s banned from releasing them.

“When you look at a contract on the city's website, we should be able to see how the decision was made to award that contract,” he said.

Olzinger also wrote in her response letter that OMB is working to replace its Scout website — a portal for the public to view active city contracts — with a new site. Lamb said he believes the new site will make it more transparent. Olzinger wrote that OMB hopes to roll out the new site by the end of June.

Lamb’s audit said it was difficult for auditors to figure out if the city was saving or losing money on piggyback contracts.

“Given the variety and number of cooperative agreements the city has access to, it is difficult to retroactively determine if pricing was the lowest offered,” the audit found.

Lamb’s audit recommends that OMB “encourage and assist City departments” in figuring out if contracts through piggybacking or public bid would offer the lowest price. He said purchasers should compare at least three different contracts to do that.

Despite the limitations, Lamb’s auditors were able to do some price comparisons, particularly with the city’s piggybacked contract for Amazon goods. In total, the city spent $115,642 on items ordered from Amazon in 2018. The auditors took a sample of those purchases and compared the prices to other vendors and found that, generally, using Amazon gave the city better deals. The same held true when the auditors compared prices at Staples, where the city buys much of its office supplies, to prices from Amazon.

However, when the auditors compared Amazon prices to Grainger, an industrial supply company the city uses to buy hoses, water pumps and other equipment, they found that Amazon had higher prices. Home Depot, they found, had lower prices than Grainger in some instances.

“This again supports the need for purchasers to ‘shop around’ for prices,” the audit said.

Lamb said that because the study of piggyback contracts was limited, it’s hard to say definitively whether or not they’re beneficial.

Lamb also posed questions about the city’s use of purchasing cards, or p-cards, which are like credit cards city employees can use to purchase small amounts of goods that the city doesn’t have under contract or needs in an emergency.

Lamb recommended that OMB educate employees on proper use of the cards and noted that the city should enter into contracts for goods instead of relying on using the p-cards.

The audit also recommended that OMB require city employees to keep better track of documents related to p-card purchases so that the controller’s office can better monitor that they’re being used appropriately. Olzinger responded by saying that city council, not the city controller, has authority to halt payments on the p-cards if a charge doesn’t follow the rules.

Lamb said the city needs to keep its focus on buying local and that using piggyback contracts can impede that.

“If you're not diligent about a local process, sooner or later you're going to get beat on price,” he said. “I think we owe it people to make sure we're getting best price and the only way to test that is to do some kind of local bid. And we owe it to people to give our local vendors a shot.”