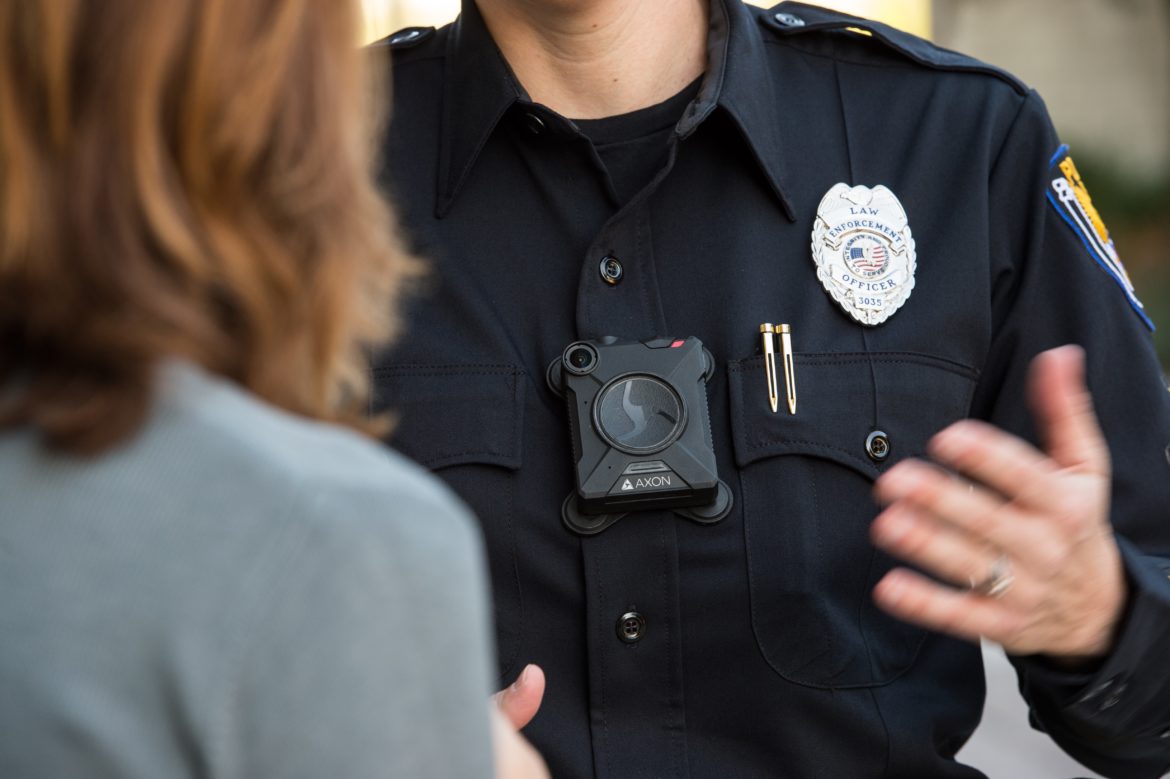 When the City of Pittsburgh moved forward with a $1.5 million purchase of 550 police body cameras early this year, it put Pittsburgh ahead of many police departments in the nation. The choice to adopt body cameras was generally lauded, but how the deal came about was less scrutinized.

In fact, the contract had been ushered onto the desks of city leaders by a high-ranking Pittsburgh Bureau of Police official with close financial ties to the billion-dollar, publicly traded company that provided the cameras.

By the time the city entered into a body camera contract with Arizona-based Axon Enterprise, formerly known as Taser International, Commander Clarence “Ed” Trapp, 58, had served in both official and unofficial capacities as an Axon product consultant for five years, during which he received thousands of dollars in travel-related expenses from the company. Trapp had also been named to an exclusive Axon advisory board for trusted police leaders that sent them on all-expenses-paid trips to advise the company on major business decisions, and paid officers such as Trapp $700 per day for their time and consulting.

The close relationship between Trapp and Axon raises questions about whether Trapp was acting in the best interest of taxpayers as he helped to negotiate with the company for the purchase of body cameras for Pittsburgh's police.

The city opted not to put the body camera contract up for bid despite 48 companies competing nationwide in the police body camera industry. The streamlined process didn’t seem to provide the best deal to the city, however; when compared to deals Axon offered to other cities, Pittsburgh’s cameras-to-dollars ratio was lackluster.

According to records obtained by PublicSource through Pennsylvania's Right To Know Law, Trapp voluntarily disclosed $4,773.71 in travel, lodging and other expenses paid to him by Axon in 2015 and 2016. Though PublicSource requested Trapp’s financial disclosures stretching beyond his first interaction with Axon, records for additional money the commander received from Axon that were detailed in emails and by Trapp in a Sept. 7 interview with PublicSource were not included on financial interest statements. Trapp told PublicSource he was not required to submit financial disclosures until 2015. Pittsburgh Bureau of Police Commander Clarence “Ed” Trapp was assigned to discuss a body camera deal with Axon, formerly Taser International, back in 2012. He became involved in trainings and an advisory board for the company for which he received all-expenses-paid trips. In early 2017, Trapp was involved in closing a $1.5 million deal for body cameras between Axon and the City of Pittsburgh. (Photo by Stephen Caruso/Pitt News)

City of Pittsburgh employees in charge of procurement or any other “official action [that] has an economic impact” are required to submit a “Statement of Financial Interests” annually. These forms are self-reported.

Trapp told PublicSource he accepted additional travel and lodging expenses for trips to Scottsdale, Arizona, to participate in policing conferences organized between 2012 and 2014. More than 4,700 printed pages of Trapp’s emails with Axon representatives — also released to PublicSource through a records request — show he accepted invitations to at least four additional all-expenses-paid trips to Scottsdale between 2012 and 2014. He also advised officers in New Castle, Delaware and Los Angeles on body camera procurement in 2012, at the request of an Axon salesman, and he accepted expense payments from Axon to participate in a 2013 training session in Maryland, so he could demonstrate the company’s products to Pittsburgh officers. He did a paid demonstration of Axon products to police in Clairton, Pennsylvania, later that year.

Trapp described the expenses paid on his behalf by Axon as routine. “I’m sure a lot of companies in a lot of industries do the same thing.”

“I have no desire to work for Axon. I never have. I like my job in law enforcement, and when I retire from the city, I don’t want anything to do with law enforcement.”

To bolster that argument, Trapp told PublicSource that three separate investigations were conducted by city departments into his financial ties with Axon: One by the city’s Ethics Hearing Board, he said, and two by its Office of Municipal Investigations — one prior to the city signing its body camera contract, another afterward. Such investigations are closed to the public; the city denied PublicSource’s request for records related to those inquiries.

Trapp heralded the use of Axon body cameras not only to law enforcement but also to legislators. For at least four years, Trapp provided testimony and participated in talks with state lawmakers about changing laws that would help to expand body camera adoption. According to emails exchanged in October 2013, Axon representatives urged Trapp to lobby a state Senate committee in Harrisburg — while in uniform — for changes to Pennsylvania’s Wiretap Act.

Axon spokesman Steve Tuttle provided a statement about Trapp’s relationship with Axon. He told PublicSource that their interactions were legitimate because Pittsburgh had been a paying customer since 2012, when the police bureau purchased 50 body-worn cameras. “Since that 2012 purchase, Commander Trapp has provided invaluable contributions in terms of product feedback on new product development and continues his role in the necessary and crucial ‘voice of customer’ feedback to Axon.”

The city purchased the cameras in 2012 by requesting Allegheny County issue a sole source contract for nearly $162,000, meaning it was not put out for bid. In 2012, Trapp said the body camera technology was in its infancy; therefore, the city at that time expected many fewer or no other companies to be able to provide the equipment they were looking for.

For the $1.5 million deal made earlier this year, the city also signed with Axon without seeking bids. The city did turn to the National Intergovernmental Purchasing Alliance to find a more recent price comparison for the cameras that the company had provided to the City of Tucson, Arizona, in 2014. According to contract documents, Tucson had put its request for proposals from body camera vendors through a competitive bidding process and ultimately chose Taser/Axon.

Pittsburgh still appeared to receive less for its money than prices quoted by Axon for departments in other cities: Though each body camera contract is department-specific, with different features for different agencies, a $1.5 million deal got the Los Angeles Police Department 300 more cameras than Pittsburgh. New Jersey state police’s $1.5 million deal was part of a 1,000-camera rollout. In Austin, Texas, the original deal was 500 cameras for $1.5 million; a competitor sued, claiming the bidding process was rigged, which led to a court injunction, and the deal was revised to provide 724 cameras for $925,000.

What Axon told these police departments they could get with $1.5 million Source: Prices quoted by Axon to cities in media reports and Pittsburgh body camera contract. In some cases, the number of cameras is rounded to the nearest whole number.

If he could do it all over again, Trapp told PublicSource in September that he would have put the contract out for bid.

“If we were starting over again and the same products were on the market that are now…, I would have reached out and found any reputable body camera program I could find and have them come in and demonstrate their product,” he said.

Yet in past emails, Trapp mocked the mere idea that any company could compete with Axon’s products. “[A] gent from VIEVU body camera was here,” he wrote in an April 9, 2013, email to Josh Isner, a salesman with Taser who is now the company’s executive vice president of global sales. “I must say, I was very impressed with their system and am going to recommend we switch to it... alright, I can't even type that with a straight face,” he continued. “I think the Flex/Evidence system runs circles around the VIEVU, not that you are worried about the competition.”

By forgoing the bidding process, the City of Pittsburgh lost an opportunity to negotiate for a better price and failed to explore a variety of features from the large number of competing companies, features like facial recognition, auto-activation, live-streaming capabilities and other add-ons that could have been useful to Pittsburgh cops.

Trapp’s Axon connections are evocative of the company’s practices in other cities.

“There have been some really questionable allegations” made against Axon, said Seth Stoughton, a former officer with the Tallahassee Police Department who's now a law professor at the University of South Carolina and studies the role body cameras play in police use-of-force investigations. Those allegations revolve around “rewarding agency contacts that Axon works with — allegations of job offers following the commander or agency contact’s retirement, paid travel, hiring them as Taser trainers or Taser-related experts,” Stoughton said.

Those allegations have led to trouble for a number of police departments and their leaders.

Trapp said he did not accept stock or non-expense-related payments from Axon. However, Trapp did serve on the company’s Customer Advisory Board — a prestigious group of police leaders, typically one per state maximum, that helped to advise Axon how it should adapt its body camera products. Members of the board received a flat rate of $700 per day to attend meetings, and at least one member went on to become an Axon employee. It is unclear how many days Trapp provided services for the board, though he said he was not paid a stipend for the first meeting he attended.

Trapp served on that board for more than two years, tendering his resignation via email two months prior to Axon submitting its final price quote to the city.

“This is blatant,” Pittinger said of Trapp's financial ties to the company. She referenced the downfall of former Pittsburgh Bureau of Police Chief Nathan Harper, who served federal prison time for his unethical financial relationships while in office. “I don’t understand why he would do this. Trapp is someone with decades of experience who could make six figures if he retired and went into the private sector as a public safety expert. Why he wouldn’t just do that is beyond me. Instead he puts his entire reputation on the line, for what?”

“There have been some really questionable allegations.”

Trapp found such allegations meritless. He insisted that he’s happy with Axon’s products and services, and that his accepting expenses from Axon was above board.

“I have no desire to work for Axon. I never have,” he said. “I like my job in law enforcement, and when I retire from the city, I don’t want anything to do with law enforcement.”

He went on. “I probably could” make a lot of money post-retirement working for Axon, he said, “but I’ve never been driven by money.”

“If I wanted to make a lot of money, I wouldn’t have become a cop,” he said.

This story was fact-checked by Evan Bowen-Gaddy.

Matt Stroud is a freelance reporter in Pittsburgh and a criminal justice researcher at the American Civil Liberties Union of Pennsylvania. The subject of this PublicSource report is not related to the ACLU or Stroud’s work there. He encountered this information during research for his first book before he started his job at ACLU. The book is about the rise of 21st century technology in American law enforcement. The book is due out from Metropolitan Books/Henry Holt in 2018. Follow him on Twitter @mattstroud.

Check back Tuesday for a story that will take you back to the first interaction between Axon and Commander Trapp.