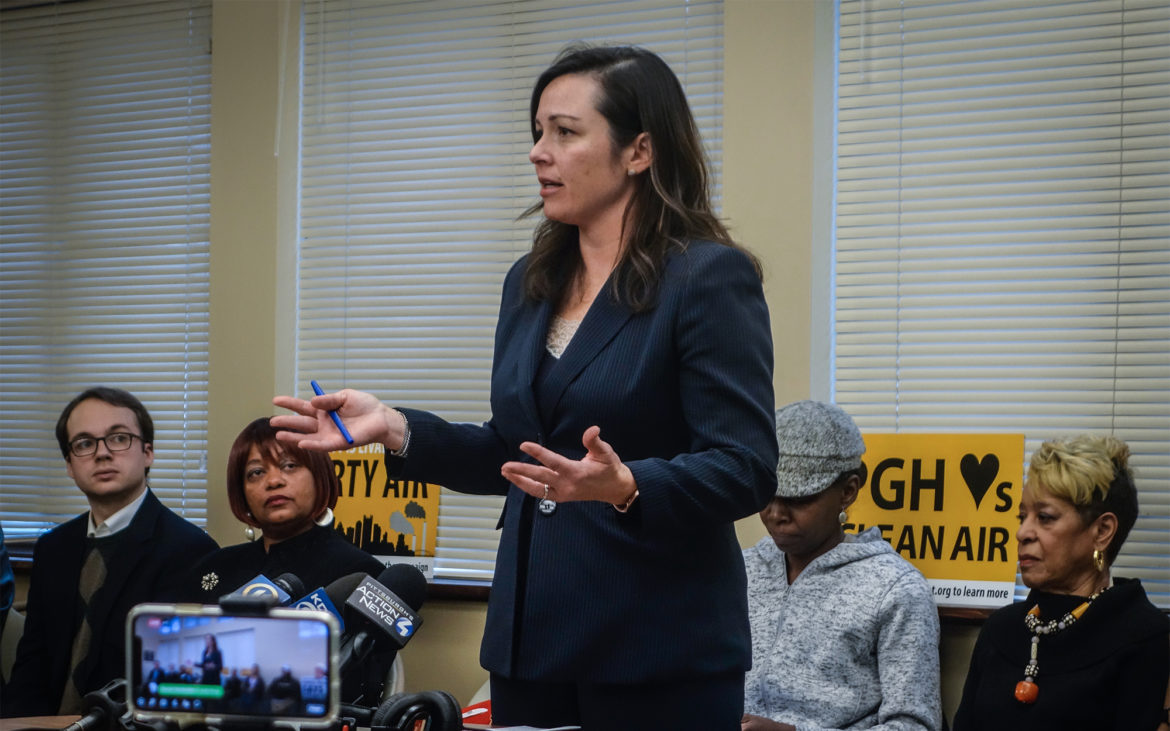 Allegheny County Controller Chelsa Wagner issued an audit on May 8, 2019 criticizing the county government's use of piggyback contracts. Wagner is pictured here at a Jan. 23, 2019 event held in response to a fire at the Clairton Coke Works. (Photo by Oliver Morrison/PublicSource)

In an audit released Wednesday, Allegheny County Controller Chelsa Wagner called out the county government’s widespread use of “piggyback” contracts as potentially wasteful and lacking transparency.

Piggyback contracts are contracts for goods or services — for instance, copy machines or computer software — that were negotiated by one government or agency and used by another government without a separate public bid. For example, if the state government has a contract for road salt, Allegheny County could piggyback on that contract and get the same price from the vendor without negotiating a separate contract.

“Piggybacking is essentially like buying everything you need at the store closest to your home. It may be convenient, but you don’t know you’re getting the best price unless you shop around,” Wagner said in a statement on Wednesday. “This probably isn’t smart for the average consumer, but for government, it’s an abdication of our obligation to look for the best deal for our taxpayers.”

In his letter to Wagner responding to the audit, Tyskiewicz refuted that characterization.

“Piggyback contracts and cooperative purchasing are...good for the taxpayer,” he wrote. “Industry leaders have indicated that piggyback contracts used nationally can save 10-15% as opposed to a singular solicitation.”

The audit, which covers the period from January 2017 through June 2018, includes four major findings or claims:

Tyskiewicz did not to respond to the controller’s specific findings in his letter. Instead, he wrote that he would respond “globally, as I believe it provides a more accurate picture of our efforts” and pointed out what he viewed as inaccuracies. County spokesperson Amie Downs said in an email on Wednesday that Tyskiewicz was not available for an interview.

In an emailed statement, Tyskiewicz reiterated several points he raised in his response letter, including that the county does do price checks for some piggyback contracts. In one example he cited, the county put out a bid for bottled water and identified a company to provide the goods. Upon review, however, purchasing officers determined that a different company with a piggyback contract had a lower price than the company that responded to the bid.

“...[I]n order to ensure the taxpayers are receiving the lowest price for goods and services...we often review piggyback contracts and responses to the invitation to bid,” Tyskiewicz said in the statement. “Our responsibility is to be good stewards of taxpayer dollars.”

“We're now piggybacking on these quasi-governmental purchasing agencies where I don't know that very many people actually know what those entities do or the standards that they follow and that is all around the country,” he said in an interview on Wednesday. “So it really does create a Byzantine, very confusing, non-transparent process.”

Additionally, Korinski said, piggybacking can open governments up to corruption or fraud.

Piggyback contracts can allow government insiders “to game the system by getting a contract approved by one of these national purchasing agencies,” Korinski said. “And then it's very easy for someone else in a governmental department just to say, ‘Well, they're on the list and we can hire them.’”

Korinski argued that governments like Allegheny County should be able to know what goods and services they’ll need for a given year and plan ahead, meaning it can buy the things it needs via contracts that are publicly bid.

The audit also pointed out that the use of piggyback contracts can mean fewer county contracts go to local companies and companies that are run by minorities, women or other disadvantaged groups of people.

Tyskiewicz also said the use of piggyback contracts doesn’t mean the county isn’t contracting with minority business owners. He pointed to The Wilson Group, a “minority supplier of toner cartridge and other office supplies,” which the county spent $50,647 with via a piggyback contract.

“We know that ideally every solicitation would be bid, every award would be local and every price would be the lowest in the country. That’s not reality, however, and our Purchasing Division has a difficult balancing job,” Tyskiewicz wrote. He said purchasing officers strive for transparency and low prices.

In an additional response to Tyskiewicz’s letter, Wagner wrote that while piggyback contracts don’t exclude local companies or companies run by minorities or women, putting more contracts out to bid would result in more local contracts and more contracts with disadvantaged groups.

“I think for something that is that important, we would think that the personnel should be proportional to the importance,” Korinski said.

In response, Tyskiewicz said that the number of purchasing officers is not a factor when it comes to piggybacking.

"The staff complement in the office has nothing to do with the findings of the audit," he said. County employment data from 2018 lists eight employees who handle purchasing for the county.

Despite the problems pointed out in the audit, Korinski offered praise to the county’s purchasing officers.

“They work really hard and they do a good job and they're very diligent,” Korinksi said.