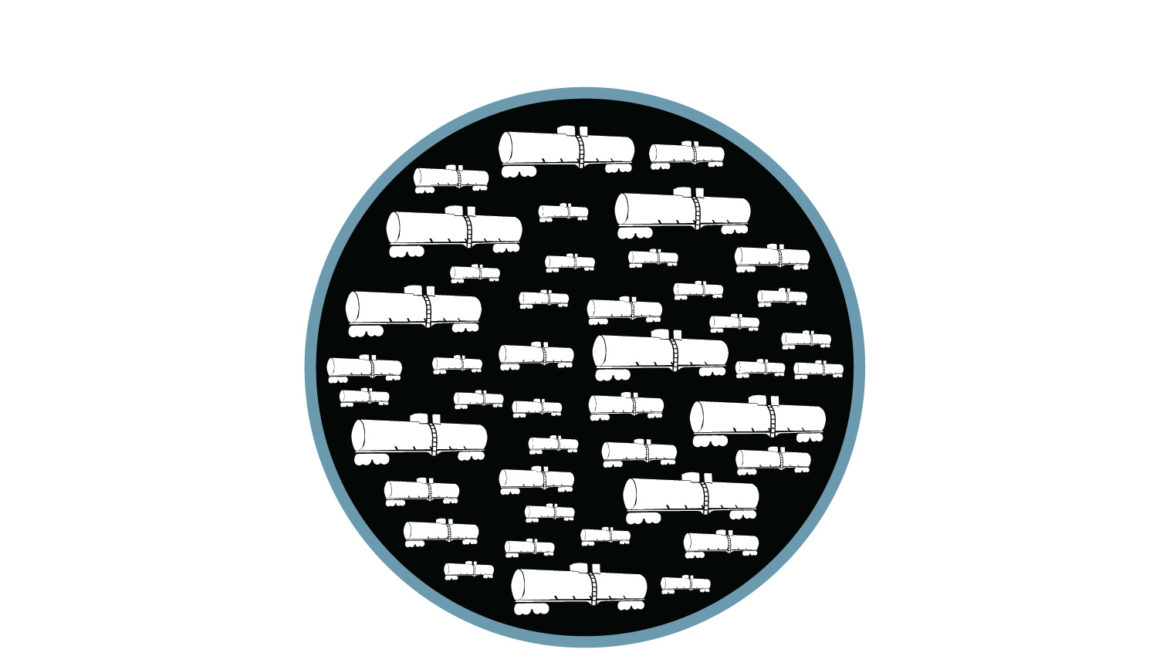 More trains carrying crude oil to East Coast refineries mean a greater risk of accidents. Derailments in Pennsylvania and throughout the country are a signal to some that an accident could be disastrous.

Why is more crude oil moving through Pennsylvania?

North America is now the biggest producer of crude oil in the world, partly as a result of fracking in North Dakota and other Western states. In 2013, U.S. railroads carried more than 40 times what they carried in 2008. Without pipelines to move the oil, much of it has been pushed onto the rails. Refineries processing much of the crude from the Bakken formation in the West are in the Philadelphia area.

Are these trains dangerous?

As crude-by-rail traffic increased, so did its accidents. Some lawmakers and public safety groups are concerned that as production surges, people near railroad tracks are exposed to more danger. And some believe the crude boom has outpaced the necessary regulations to ensure safety.

There have been at least 12 significant derailments involving crude since May 2013 in North America. Some involved explosions, evacuations, environmental damage and injuries. The most devastating was in Lac-Mégantic, Quebec, in July 2013, when 47 people died after a train carrying Bakken crude exploded. Since January, Pennsylvania has had derailments involving crude in Philadelphia, Vandergrift and McKeesport. There were no injuries in any of the accidents.

How much crude oil do these trains carry?

Right now Norfolk Southern and CSX, the major railroads in the state, move as many as eight trains of crude oil a day combined through the state.

Dubbed “virtual pipelines,” these trains can have more than 100 tank cars and can carry millions of gallons of crude.

Is Bakken crude more volatile than other types of oil?

North Dakota Bakken crude is potentially more volatile, corrosive and flammable than other kinds of crude oil. Investigations found that the Bakken crude that exploded in Quebec was classified as a less dangerous type of oil. In February, the U.S. Department of Transportation issued an emergency order requiring testing of all Bakken crude to determine its explosive nature.

Are other types of crude oil dangerous?

Other types of crude from the U.S. and Canada also could pose a threat. All crude oil is flammable and can cause environmental damage, Christopher Hart, acting National Transportation Safety Board Chairman, told the Associated Press in June.

What’s wrong with the rail cars?

Sometimes referred to as the “Ford Pinto of railcars,” the DOT-111 tank cars used to ship crude have been known to be a safety hazard for decades, according to federal safety investigators. Designed in the 1960s, they are prone to puncture and “catastrophic loss of hazardous materials” when trains derail, according to the NTSB.

The derailments have caused an outcry by state and federal officials and safety groups demanding that the cars be taken off the tracks. Canada has already ordered railroads to stop using them by 2017, but U.S. regulators have been slow to act. The U.S. DOT did advise railroads in May to stop using the cars to carry crude oil. The White House is currently reviewing new standards for tank cars, but it could take months before rules are in place.

Emergency planning is largely left up to counties. A state agency oversees 67 Local Emergency Planning Committees, which can request general information from railroads about hazardous materials coming through their counties. That information is not public.

Can you find out when crude oil trains come through your neighborhood?

Officially, no. Railroads are not required to share information about hazardous materials under federal law. Norfolk Southern and CSX, for example, said they don’t give out that information, citing possible security incidents and competition.

What has been done to improve safety?

U.S. regulators asked railroads to comply with a number of voluntary actions. The railroads agreed to slow crude trains to no more than 40 mph in high-risk urban areas. (However, a train that derailed in Lynchburg, Va., in April was traveling just 24 mph.)

In March, CSX agreed to give PEMA access to its real-time monitoring system that tracks crude’s movement through the state. Cory Angell, the agency’s spokesman, said it is working with Norfolk Southern on a similar agreement.

Are first responders prepared for a significant derailment in Pennsylvania?

Daniel Boyles, the emergency services coordinator for Blair County, told PublicSource he thinks railroads are doing everything in their power to prevent accidents. However, he said, first responders need more training. Trains carrying Bakken crude roll through his county twice a week, he said.

Emergency officials in Beaver, Allegheny and Dauphin counties said that awareness has increased and railroads have given emergency responders more training.

A PEMA spokesman said the state is prepared in the case of a major derailment. He added that Pennsylvania will soon use a DOT grant to train county hazmat teams and first responders.

“No community is prepared for a worst-case event,” Deborah Hersman, former chairwoman of the National Transportation Safety Board, told a Senate subcommittee in April.

Under voluntary safety measures effective July 1, railroads will contribute $5 million for training for emergency responders. And they will develop a list of emergency-response resources in case of a derailment.

In a Jan. 23 letter to federal regulators, she said without comprehensive crude oil response plans “[rail] carriers have effectively placed the burden of remediating the environmental consequences of an accident on local communities along their routes.”

Which officials are talking about this in Pennsylvania?

Sen. Bob Casey (D-Pa.) endorsed a bill he said would boost safety. The bill would include $3 million for track inspections and hire 20 new inspectors.

Philadelphia Mayor Michael Nutter backed a proposal to charge a federal freight fee to crude-oil producers and industrial consumers. The money would be used to improve tracks.

Christina Simeone, director of PennFuture’s energy center, said other states have shown leadership on the issue — but not Pennsylvania.

Republican Gov. Tom Corbett has been silent about the safety issue, said Simeone, who commented that there is interest in “minimizing the issue” because of concerns about the refinery business in Philadelphia and gasoline prices in the region.

Pittsburgh Mayor Bill Peduto has not been part of the conversation. In a recent meeting with PublicSource, Peduto said that he is “aware of the reality of what is coming through.” In the case of an accident, Pittsburgh could call on the PA Region 13 Task Force, he said. The task force is an initiative that allows counties to pull resources from the entire region in case of an emergency.