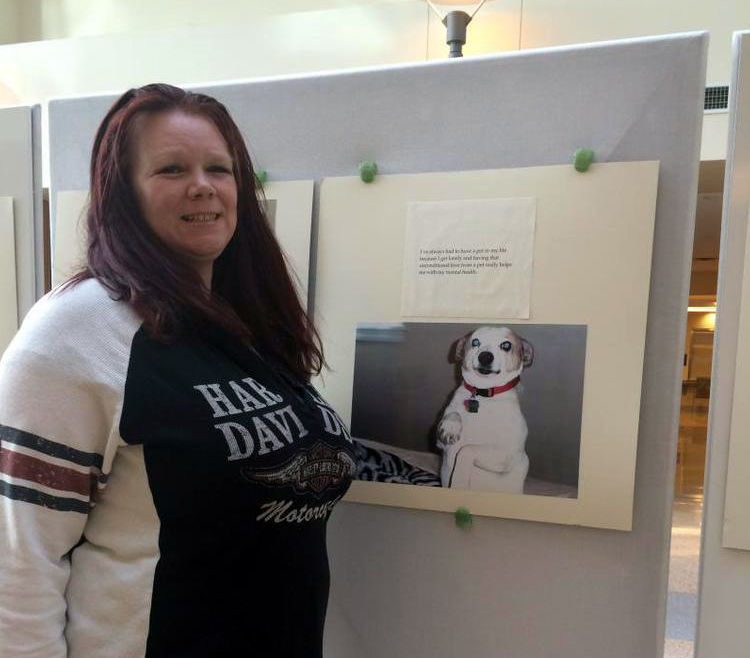 Hope is a U.S. Coast Guard veteran who served from 1997 to 2000. She has been homeless on and off since then and is taking medication for post-traumatic stress disorder.

For a research project at VA Pittsburgh on Monday, she took a photo of her dog, Mattie, who she says keeps her stable and helps her cope with PTSD.

The U.S. Department of Veterans Affairs (VA) estimates that 12 percent of the adult homeless population are veterans, and VA Pittsburgh officials estimate about 180 homeless veterans live in the city.

The VA describes homelessness loosely: “It doesn’t always mean people living in a cardboard box,” said Lauren Broyles, a research health scientist at the VA’s Center for Health Equity Research and Promotion (CHERP). “It could be couchsurfers, people living in subsidized housing about to be evicted.”

Hope, who asked PublicSource not to use her last name, now lives in a house east of Pittsburgh with another veteran.

She and other veterans took part in a research study that was funded through a $25,000 grant from the Mental Illness Research, Education and Clinical Center.

More than 230 photographs and 1,200 minutes of interview videos were shot as part of the project, which asked veterans how they think of their own health and how they make health decisions. Nineteen of the study’s 20 participants were men.

Dozens of photos and accompanying quotations now decorate the VA Pittsburgh lobby, including one that shows the front doors of a church.

This is home. So, this is my new life. It feels good, not having to want for the drug, not going to the bars and stuff.

About two-thirds of the Pittsburgh homeless population has some form of temporary housing, but the instability can cause other concerns.

“If someone has a problem with housing, then they can’t really get their meds,” said Dr. Adam Gordon, a primary care physician. There are many veteran-specific programs for in-patient treatment, drug detoxification, mental health care and behavioral health care, as well as group meetings and transitional homes.

Another veteran, Ed, said he liked to take photos even before he was asked to take part in the project.

“I have cameras of my own,” he said. Ed works at UPMC in food service and resides at housing unit of St. Joseph’s Catholic Charity. He was a medic in the U.S. Army from 1976 to 1981, during which he spent three years in Germany.

Three of his photos made it into the exhibit. One of them was of a homeless shelter. The others were of a tackle box and flowers near the Carnegie Museum of Art.

"I love being out in nature, out fishing, hunting, away from it all," Ed said.

The VA provided Ed with eye and hearing care and helped prep him for job interviews.

Tina Matey of Comprehensive Vocational Services said that compensated work therapy (CWT) can be a life-changer for many veterans. It puts them to work in the hospital in rigorous housekeeping training programs and supplies them with transferable skills.

“Some of them” are then hired full-time at the VA, Matey said. Others have been hired at Chatham University and UPMC.

Veterans are also at a high risk for addiction. Alcoholism is common, but Pat Wilson, nurse manager at the Center for Treatment of Addictive Disorders (CTAD), said, “We have all kinds, especially opioids.”

When people graduate from their methadone clinic, they’re given a naloxone kit (also known as Narcan, the anti-overdose drug) and trained to use it. Wilson said veterans have come back saying they’ve used it, but usually on their friends, not themselves.

Wilson noted that addiction is often a symptom of other problems for veterans.

“I can count on one hand the number of people in our clinic who’ve just had substance addiction, without depression or PTSD,” Wilson said.

Although the programs are there, veterans have had a difficult time accessing the services. U.S. Sen. Bob Casey, D-Pa., is calling for the immediate passage of the 21st Century Veterans Benefits Delivery Act, which would eliminate the VA’s disability backlog that can leave claims and vulnerable veterans stalled for hundreds of days.

According to a press release, Casey’s bill includes legislation that would improve the benefits process, health care, education services and employment and transition assistance.

The “Homeless Veterans’ Opinions of Integrated Care Environments: A Photo-Narrative Study” will be on display in the VA Pittsburgh lobby, on the University Drive campus in Pittsburgh, until Nov. 11. The event is free to the public and open from 8 a.m. to 3:30 p.m.