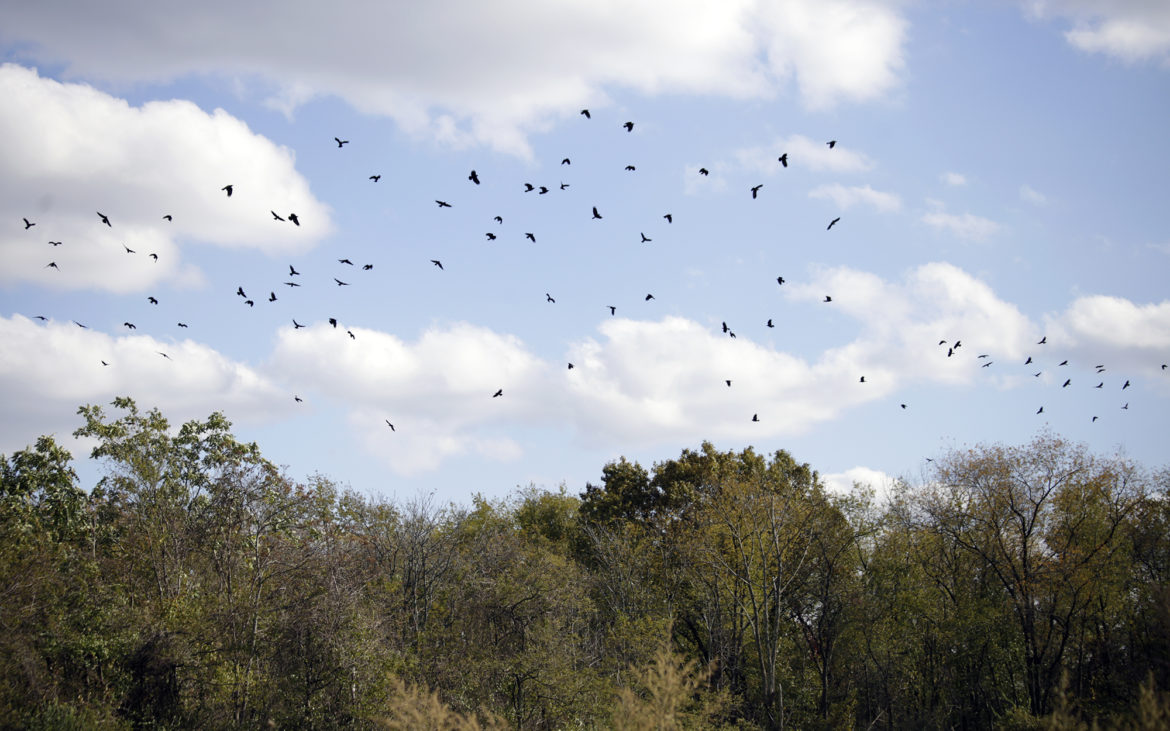 Birds fly above a section of Hays Woods. (Photo by Ryan Loew/PublicSource)

The Urban Redevelopment Authority [URA] board voted unanimously Thursday to transfer 555 acres of the Hays Woods property to the City of Pittsburgh for the creation of a permanent city park, while retaining about 89 acres of the property for future development.

“This is a tremendous opportunity for the city,” said URA Chairman Kevin Acklin, who negotiated the purchase of the entire 660-acre parcel from developer Charles Betters last June for $5 million.

At the time the purchase was announced, the city said Hays Woods would become the largest park in Pittsburgh. With 89 acres reserved for development, it will become the city’s second largest, under Frick Park. Hays Woods lines the south bank of the Monongahela River between South Side and Homestead. Members of the URA board and others listen to URA Chairman Kevin Acklin discuss Hays Woods at a board meeting Nov. 9. The yellow section on the displayed map is 89 acres set aside for potential development; the blue portion is 555 acres set aside for parkland. (Photo by Brian Conway/PublicSource)

Acklin also announced at the Thursday afternoon meeting that the mayor's office has asked to form a commission, to include former Mayor Tom Murphy and others, to decide how to proceed with programming and amenities for the 555-acre park.

Many local residents were in attendance at the standing-room-only meeting, many of whom voiced concerns about the potential of future development on the Hays Woods property.

Baldwin Borough Manager John Barrett told PublicSource for a previous article that the URA met with borough officials twice to discuss the city’s land acquisition. Barrett wrote in an email to PublicSource that the URA, in meetings with Baldwin Borough officials, pitched a concept “of higher end homes, [single] family homes and that they would only build on a portion of the property in a low-density fashion.”

“Whether or not there will be anything on these 89 acres is still a very big question mark,” said URA board member Jim Ferlo.

The parcel of land set aside for development that was presented at the meeting follows a natural plateau near the Becks Run portion of the site and includes two new access roads, one from Becks Run Road and another from Agnew Road in Baldwin.

URA Executive Chairman Robert Rubenstein said the URA had previously discussed low-density, residential housing on the site, and that was something the agency “could and would consider at a later date, subject to much discussion.”

Rubenstein also stated that the URA intended to recoup much of the $5 million spent on the property to date by selling a conservation easement on the remaining 555 acres of parkland. The URA approved a measure to pursue expressions of interest from nonprofit organizations to purchase and hold such an easement on the 555 acres that would guarantee its designation as parkland going forward. Hazelwood resident Matt Peters, a member of community activist network Heartwood, speaks out against a proposal to develop 89 acres of Hays Woods at a URA board meeting Nov. 9. He attended with a person in a bear costume, who declined to be identified. (Photo by Brian Conway/PublicSource)

Hazelwood resident Matt Peters, a member of regional community activist network Heartwood, attended the meeting with a friend dressed in a bear costume. He expressed concern for what a potential housing development would mean for the view of the hillside from his home across the river, as well as the ecological impact of tearing down or fragmenting forestland in an era of climate change.

“To see the map was scary,” Peters said after the meeting. And while heartened to learn that the URA was not voting to approve housing at the Thursday meeting, he said his opinion remained unchanged: “That all needs to be protected.”

Patrick Duffey, of Troy Hill, took a half day off of work to be present at the meeting after hearing about the vote from local environmental groups. He asked who had helped the URA determine which parcel of land would be set aside for development, and found the board’s response — that they would have to go back and check meeting minutes — to be unsatisfactory.

Heather Lodge, of Bethel Park, attended the meeting with her son, Theo. She said they spend most weekends watching the Hays bald eagles from the trail below and she was concerned about what any potential development would mean for their habitat.

“I think we got a lot of clarification about at least what's not happening today,” she said after the hearing. “I think we're going to have to do a lot of follow-up about what is going to happen and on what kind of timetable.” Wildlife abounds in the 660 acres of Hays Woods. (Photo by Ryan Loew/PublicSource)

Wilkinsburg resident Alexander Denmarsh, formerly of Baldwin, urged the board to postpone a vote in order to study viable alternatives to recoup money for the land other than development.

Acklin responded to Denmarsh by saying he wanted to start the process of establishing a 555-acre park for the enjoyment of all city residents and again stressed the city was not taking any immediate action on developing the land.

“I think all that we're saying is this is an area we want to preserve for a future conversation, and the public and folks who are interested in that conversation are no worse off tomorrow with a ‘yea’ vote today,” Acklin said.