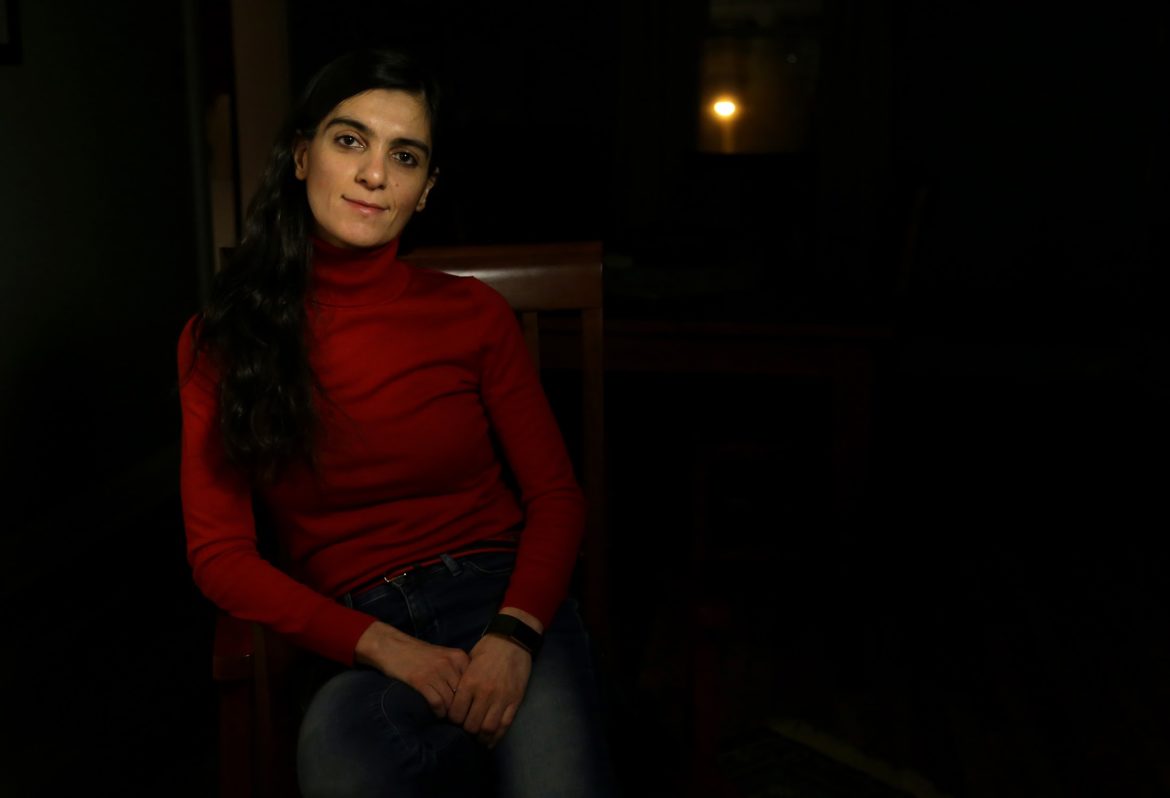 University of Pittsburgh professor Rosta Farzan is a dual citizen of Iran and the United States. She became a U.S. citizen about a decade ago. Academics, like Farzan, are concerned that they won't be able to travel to present their research any longer because of Trump's now-disputed executive order banning immigration from seven majority-Muslim countries. (Photo by Guy Wathen/PublicSource)

Some nights, after she’s had a long day of teaching and studying computer science at the University of Pittsburgh, Rosta Farzan dreams about her brothers.

She has three of them, one older and two younger than she is, and they all stayed behind in Iran when she left for the United States 17 years ago. One is a teacher, another is a software engineer and the third teaches mechanical engineering to kids and owns a cafe. Farzan is in love with Pittsburgh, its hills and valleys, universities and museums. She hopes that one day she gets to show her two younger brothers, who have never visited, all of her favorite parts of the city.

In her dreams, she only ever has 24 hours to give the tour, so she’s always changing what she shows them first. Because her home is near Highland Park, visiting the gardens and reservoir might be up first. Next might be the Mattress Factory, or Pitt’s campus or Mt. Washington.

Farzan, who is 40 and has been a citizen for about a decade, won’t get to show them any of those places if President Donald Trump is successful in reinstating his executive order that temporarily bans immigrants and other travelers from seven predominantly Muslim countries.

Though the 9th Circuit Court of Appeals unanimously ruled against reinstating the travel ban on Thursday, the Trump administration has promised to fight the decision for the “security of our nation.” As the dispute continues, immigrants and refugees remain in limbo.

Some legal immigrants have been rushing into the country while the ban is suspended, but Farzan’s brothers are earlier in the process, still trying to assemble their paperwork.

For immigrants living in Pittsburgh, particularly those who are academics working at the city’s universities, the ban has turned their worlds upside down, causing strife both in their personal and professional lives.

And for Pittsburgh, the immigration ban poses the threat of a “brain drain,” meaning foreign-born professors and researchers, who are some of the city’s brightest minds, may be forced to leave Pittsburgh for another country. It would also mean students from the affected countries wouldn’t be able to attend school here. The Iranian Student Association of Pittsburgh organized the Thursday protest for academics, researchers and students who are against the immigration and visa ban. (Photo by Stephen Caruso/PublicSource).

While Pitt and Carnegie Mellon University don’t publish data on how many faculty members hail from the countries affected by the proposed ban, 103 students are listed as coming from Iran, Iraq, Syria, Sudan, Yemen, Libya and Somalia, between the two schools. Four students from Duquesne are affected by the ban as well as eight from Chatham University.

Pittsburgh Mayor Bill Peduto said he is acutely aware of this reality. He’s blasted the immigration ban as harmful to the city and its families since it was signed and recognizes the “turmoil” it has caused.

“A lot of the economic growth we’ve seen in Western Pennsylvania over the past decade has been through the universities and the hospitals, and those are our Ellis Islands,” he said. “Those are where people are coming from all over the world to help change the world and right now we put a big wall around it.”

While Pittsburgh’s “brain drain” has been lessening recently (a 2015 study pointed out that the trend is beginning to reverse), officials at both the universities and the city remain aware that keeping Pitt, CMU and other graduates in Pittsburgh is vital.

At Pitt, for example, several academics who hail from Iran, including Farzan, said they would leave the United States if the ban is not permanently lifted or if it leads to more dire events like war. This additional brain drain of immigrants could set Pittsburgh back even further, as local business experts have written about in depth.

One of those professors, Kayhan Batmanghelich, who researches and teaches biomedical informatics at Pitt, said the ban will force him to miss his sister’s wedding in Iran and will disrupt the lives of countless others.

“With the stroke of a pen, a wedding is missed, a eulogy not spoken, a job is not taken, a family is left broken, safety isn’t found,” he said.

Trump’s immigration ban is not the first of its kind, at least for Iranians. In 1979, in the midst of a hostage crisis between Iran and the United States, President Jimmy Carter signed an executive order barring Iranian nationals from entering the country and calling for students from Iran to be deported.

Arjang Assad, who was finishing his Ph.D. at the University of Maryland at the time, was almost one of those students. He now serves as a dean at Pitt’s Katz Graduate School of Business.

When the ban was signed in 1979, Assad was preparing to defend his thesis. He already had a job offer. And he was just days away from being deported. But a sympathetic judge, seeing Assad’s situation, threw his case out of court.

“Without that I would be God knows where,” Assad said.

Assad sees parallels between Carter’s executive order and Trump’s. But because Trump’s order goes beyond Iran, it has potential to harm American universities now and for years to come, Assad said. Not only are some students and professors not allowed to travel outside of the United States, but also international students who may have come to Pitt or CMU for school may choose universities in Australia or Singapore.

In addition, American companies and universities may not hire students and professionals from the seven affected countries.

In the long run, the ban could cost Pittsburgh and the United States bright minds.

“There so many inputs to what makes America great, but one of them is diversity and the international flow of ideas,” Assad said. “I see no reason why we should lose that.” Rosta Farzan's mother, Simin Dehghan (right), is an Iranian citizen and has a green card. She spends about six months a year visiting her daughter, a Pitt professor, in Pittsburgh and volunteering at the Carnegie Museum of Art. But now, if Trump's order stands, her mother will be barred from coming back. (Photo by Guy Wathen/PublicSource)

For people like Farzan, who immigrated to Pittsburgh with student or work visas and now have green cards or are naturalized citizens, the ban cuts them off from family members they’ve left overseas or could lock them into a country they often need to leave to do their jobs.

Academics frequently travel outside of the country to attend or present their research at conferences. Now, some of Farzan’s colleagues may not be allowed back to the United States if they leave.

On top of that, Farzan’s mother, who comes to Pittsburgh for six months each year to live and volunteer at the Carnegie Museum of Art may also be barred from coming back. While Farzan's mother has a green card, others in her family were in the middle of applying to get theirs when Trump signed the ban.

“It’s so difficult for them to come here and now it’s impossible so, well, thanks,” Farzan said. “Am I not a citizen of this country? Do I not have the right to see my family? Has anyone in my family ever done anything wrong?”

Leaders at both Pitt and Carnegie Mellon University have made statements denouncing the ban but both declined to comment on how the immigration ban could force faculty, researchers or students to leave.

Batmanghelich, a green card holder, said he’ll move to the United Kingdom if the ban is permanent because he has to travel outside of the United States to present his work. Ali Al-Khafaji, pictured here in Scaife Hall, is a professor of critical care medicine at the University of Pittsburgh and a medical director at UPMC Montefiore. He was born in Britain, raised in Iraq and is a U.S. citizen. His sister was supposed to visit from Iraq recently, but had to cancel because of Trump's executive order. (Photo by Guy Wathen/PublicSource)

Ali Al-Khafaji, a professor of critical care medicine at Pitt and a medical director at UPMC Montefiore, and his wife have other problems. Al-Khafaji’s mother was already visiting one of his sisters in Philadelphia when the executive order was signed. She has a green card, but with all the uncertainty, Al-Khafaji is insisting she stay in the country. She cries every day, missing her home and family in Iraq.

Even though Al-Khafaji and his wife have been citizens since 2012, Trump’s actions have eroded a small piece of their American Dream. Ever since he and his wife have come to Pittsburgh, they’ve been good citizens. They pay their taxes; they help their patients; and they’re friendly with their neighbors. They send their children to the public schools. Now America feels less free for Al-Khafaji even though he doesn’t practice Islam. He just hopes he doesn’t have to explain to his kids why the ban was put in place.

“I just feel like this is not right. How will I prepare my kids? I hope I never have to do that,” he said. “We are Americans.”