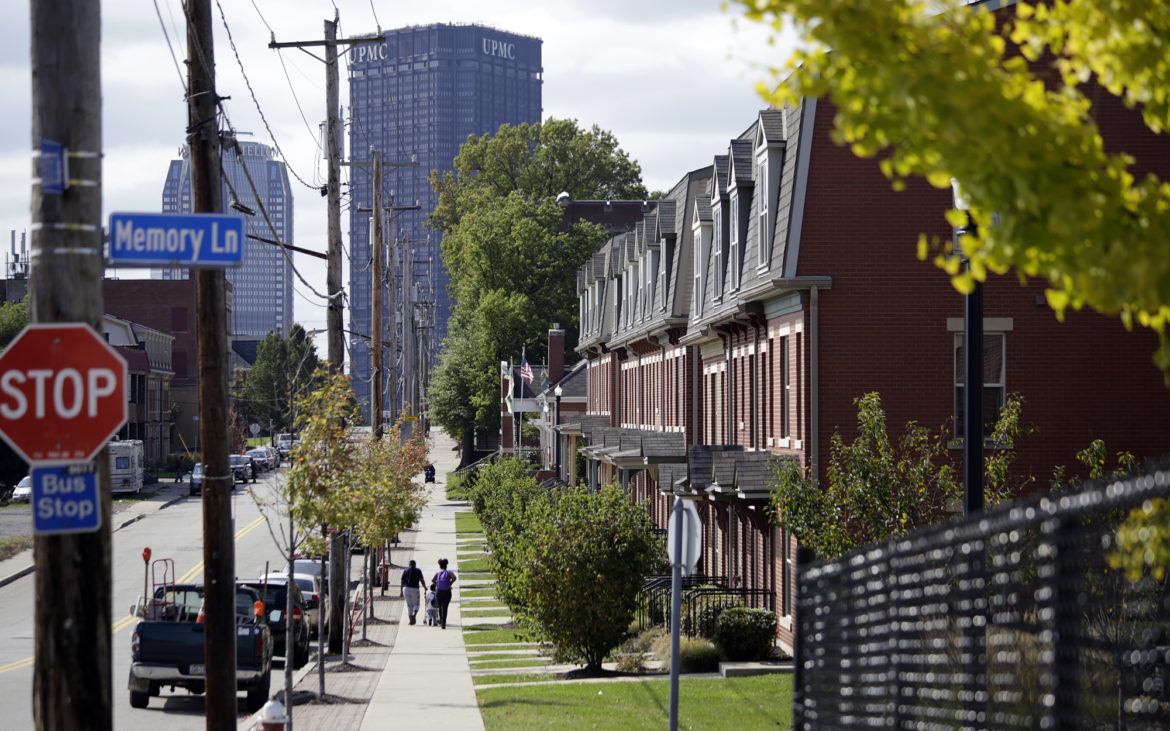 People walk along Bedford Avenue near the Bedford Hill Apartments in Pittsburgh’s Hill District. The Housing Authority of the City of Pittsburgh is trying to secure more low-income housing in the city. (Photo by Ryan Loew/PublicSource)

Pittsburgh’s path to finalizing an affordable housing policy has been arduous, but these days, there’s high confidence on Grant Street that the city will at least find the money for an affordable housing trust fund by the end of 2017. That gives city officials only two and a half months to sort through this practical and political matter of how to raise $10 million a year.

To do that, here’s what will need to happen:

But while those few steps seem straightforward, they belie a tricky political process.

Many in Pittsburgh are concerned the city will become less affordable as it’s reinventing itself into a stronghold for technology and innovation. While more than 10 percent of the city’s housing stock is considered affordable, advocates and public officials agree the city is in need of at least 17,000 additional affordable housing units. Affordable housing is typically for households whose annual income is less than an area’s median income. In Pittsburgh, that means those who earn less than $41,000.

The task force, formed in 2015, concluded that to reach its goal of $10 million annually, the city would need to find “new sources of revenue.” With the city considered financially distressed under Act 47 and only having nominal budget surpluses each year, that would likely mean raising taxes.

The task force members looked at multiple ways to raise money, including getting state approval to raise the hotel tax and using money from expiring tax credits, but decided that those options alone wouldn’t cut it. Involving Harrisburg is problematic, though. Many of the tax increases that could raise enough money would require state approval, meaning the city would be in for a fight with a Legislature that already struggles to pass a budget.

So the task force kept its options focused on what the city could control: the property tax and the realty transfer tax (RTT).

Councilman R. Daniel Lavelle, who was on the task force, became the chief proponent of raising the RTT and wrote it into a bill he introduced to council. But even he wasn’t convinced the RTT was the best option.

“Ultimately, the increase in the realty transfer tax was viewed as the best of sort of the worst options because our hands are indeed tied in terms of what we can actually do,” he said.

The idea of increasing the RTT fares worse among his colleagues on council. That proposal is “dead in the water,” according to Councilwoman Natalia Rudiak. And back in July, Councilman Dan Gilman offered tepid approval, telling the Pittsburgh Post-Gazette at the time: “Do I think increasing the realty transfer tax is a great idea? No. Do I think it’s the only tool in my very, very, very small toolbox? Yes.”

Raising the RTT is unpopular for a few reasons:

Councilwoman Deb Gross said raising the RTT is like “taking money” from the middle class to pay for affordable housing and she’d like to look for a way to make the big spenders pay more.

“If there is an opportunity to garner those dollars from the mega builders, isn’t that a better place to look for contribution?” she said.

Some cities, including New York City, have a special kind of RTT that includes a “millionaire’s clause,” meaning that real estate deals worth more than $1 million are charged more tax than the ones worth less. Pittsburgh can’t have this, though, because of the uniformity clause in the state’s Constitution. The clause says all taxes have to be levied evenly, regardless of how rich or poor someone is. But hypothetically, if Pittsburgh was allowed to have a millionaire’s clause for real estate sales, it could fund affordable housing without creating an additional financial burden for the middle class.

As of July, Lavelle, Gilman, Rev. Ricky Burgess and President Bruce Kraus supported the plan. But it needs at least five votes to pass. So if the council doesn’t sway toward increasing the RTT to raise $10 million for the fund, what are some options that remain?

Raising property taxes by half of a mill (a mill being equal to $1 in taxes for every $1,000 a property is valued at) is still on the table, though Lavelle doesn’t favor it. He worries that President Donald Trump and the Republicans who control Congress may pass a budget that cuts federal funding to Pittsburgh. If that were to happen later this year, he said, increasing the millage rate would be one way to make up the lost money.

“While I don’t necessarily see the draconian cuts that our president is proposing actually happening… I’m afraid to [raise property taxes] now, knowing we may have to do that at some point anyway if Congress acts the way that they’re actually talking,” Lavelle said.

Council members O’Connor and Gross think this strategy may work. The two tax credit programs are called the Local Economic Revitalization Tax Assistance (LERTA) and Tax Increment Financing (TIF). They work differently, but both produce the same outcome: The city receives new tax revenue, which it previously didn’t collect, when the programs expire. Put simply, both programs encourage developers to build in areas that are run down or blighted and gives them a tax break to do it. Both TIFs and LERTAs require a builder to pay a base property tax rate (meaning the amount the land is worth before it has a mall or office complex on it) and then set a schedule that says when the full amount of property tax is going to be due. These schedules usually stretch over multiple years and, eventually, the city will collect the full amount of taxes.

Gross and O’Connor want to see that “found money,” as it’s called, directed to the affordable housing trust fund. Currently, the city controller is auditing the TIF and LERTA programs to see how much “found money” will be there each year. According to preliminary numbers that Gross’ staff compiled, the city could see about $117.9 million come in between 2018 and 2028 — more than enough to put $10 million in the trust fund each year.

The plan is problematic, in part because this kind of “found money” is typically already budgeted and isn’t really “found money” at all. The end result could be a hybrid solution: It’s possible the plan could include a small increase in either the RTT or property taxes, some TIF and LERTA money and a pull from other pots of existing money.

Currently, Lavelle has been privately lobbying his fellow council members to piece together a compromised proposal that could make it past a vote.

It’s not clear what kind of affordable housing funding plan, if any, Councilwomen Darlene Harris and Theresa Kail-Smith would support. Neither returned requests for comment. Councilwoman Natalia Rudiak supports the city taking responsibility to fund affordable housing but she opposes raising the RTT and has concerns about how big of a bond the city may take out. O’Connor and Gross both have serious concerns about the 1 percent RTT but have been working most actively on a compromised plan.

“I think when you’re looking at one option, that doesn’t satisfy me. I always think there are other ways to do things,” O’Connor said. “And if you’re stuck and you’re backed into a corner, and there’s only one option, I’d like to wiggle my way out of that corner and try different options.”

O’Connor and Gross are aligned on using some TIF and LERTA money to fill the fund, but it would deplete funding the city relies on. Rudiak, too, has joined those discussions. One of the reasons the task force recommended finding “new sources of revenue” is because Peduto’s administration is concerned about not having enough money for future expenses like city contract negotiations or the city’s pension fund. That worry came up during the task force’s meetings, said Mark Masterson, the executive director of the Northside Community Development Fund.

“What was inferred is that there’s going to be a ton of budget pressure and no way to pay for it,” Masterson said. “If the mayor and administration aren’t in favor of using these funds, it’s not going to be easy.”

"I’ll work with the council members on this. I want this done by the end of the year."

As long as there is a way to make up for any TIF and LERTA money taken from the budget, Peduto said last week, he supports redirecting those funds to pay for affordable housing. Previously, Peduto had only voiced support for raising the RTT a full percent, though he said on Oct. 13 that a smaller increase along with using some TIF and LERTA money could be a viable solution.

“I’ll work with the council members on this. I want this done by the end of the year,” Peduto said. “I’m willing to be completely flexible to what they feel comfortable supporting. If they can find a better way, we’ll be there with them 100 percent.”

O’Connor said he’s aware that the city will have big expenses coming in the future but that council can use the funds if it wants to.

“Yeah, the money could have been already budgeted, but guess what? At the end of the day it comes to us and we can make that a priority,” he said.

Correction (10/17/2017): An earlier version of the story misstated the status of a tax loophole that allowed developers to avoid paying the realty transfer tax. That loophole  officially closed in 2013. The story has been updated.