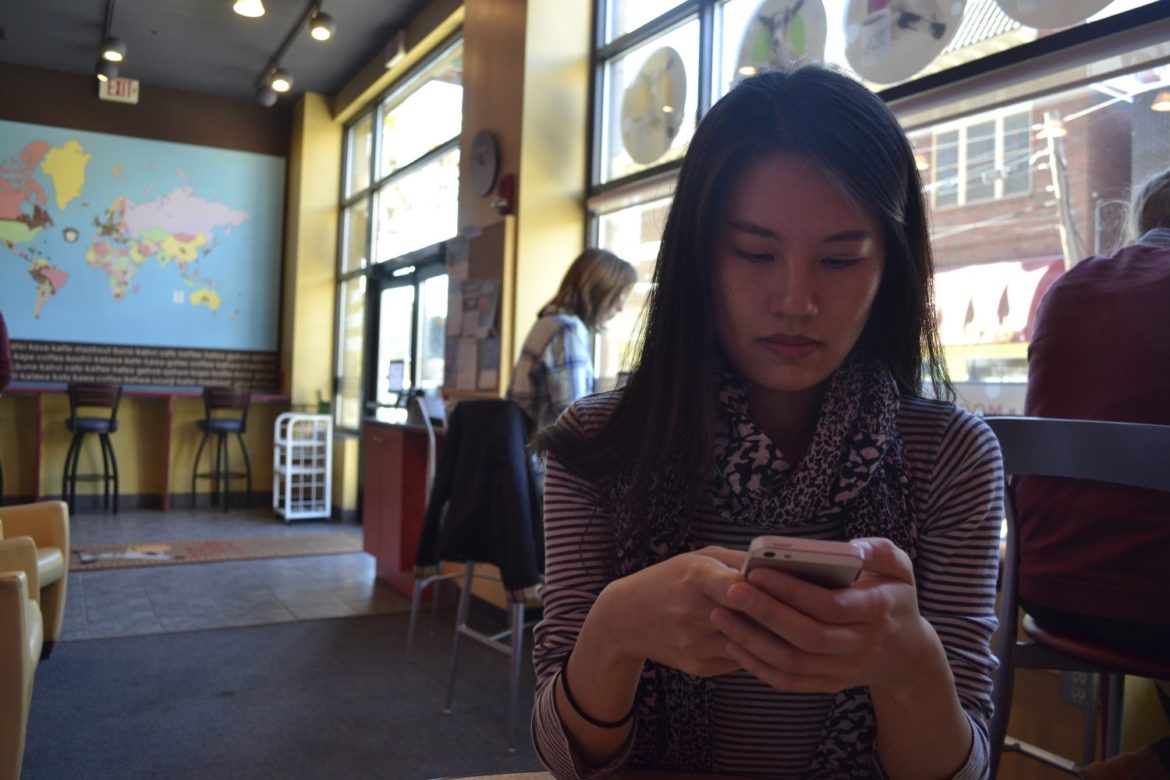 Sunyoung Cho looks out the ceiling-to-floor window of the packed coffee shop in Pittsburgh’s Oakland neighborhood. She sips from a paper cup while busyness brews around her.

Then Cho, a 30-year-old postdoctoral researcher at Carnegie Mellon University, picks up her iPhone and swipes at the screen.

Patrons at the counter are looking at their smartphones, too, waiting in line for their caffeine fixes. Students are staked out at tables, earbuds in and laptops on.

The U.S. Census Bureau says there are 83.1 million people between the ages of 18 to 34 in the nation. Studies show the average Millennial spends 18 hours per day using any type of digital media. And, 90 percent of young adults use social media, which is up from 12 percent in 2005, the Pew Research Center reports.

The Millennials, in general, are more educated and connected. But, many of the generation’s young minds are still developing. Scientists at the National Institute of Mental Health say the human brain continues to mature until age 25.

And if their brains are constantly assaulted by backlit screens, they might not develop in the same way as their parents’.

Although research in brain development among Millennials is fairly new, some medical experts say the brains of people in this generation are physically developing differently because of their almost constant interaction with technology. These changes in the organ could affect Millennials’ communication skills.

Technology use can affect the parts of the brain that control the core of a person’s personality, from how they work in a team down to hand gestures and expressions.

“I think it’s very possible” that technology alters the brain, said Kirk Erickson, principal investigator of the Brain Aging & Cognition Health Lab at the University of Pittsburgh. “But we haven’t yet directly linked these things.”

The brain develops based on how it’s used. Texting and web surfing use different parts of the brain than reading or speaking.

Some neuroscientists have targeted which parts of the developing brain are affected by technology use. According to researchers at the Chinese Academy of Sciences in Beijing, there are changes in the ways the prefrontal cortex, cerebellum and parietal lobe mature.

The prefrontal cortex, which resides in the frontal lobe, controls personality, cognition and social behavior. The cerebellum coordinates and regulates muscular activity, including those linked to language. The parietal lobe deals with interpreting language and words.

Excessive tech usage, according to leading scientific publications, atrophies the frontal lobe, breaking down ties between different parts of the brain. Too much technology use also shrinks the outermost part of the brain, making it more difficult to process information. Erickson said this can affect the way people interact.

In some cases, people have become clinically addicted to technology.

Kimberly Young, a licensed psychologist and professor at St. Bonaventure University in New York, has studied Internet addiction disorder, or IAD, for the past 20 years.

“We’re all a bit too connected,” Young said. “We socially accept it.”

She’s found that IAD is just as dangerous as other drug addictions. Patients have the same poor social skills, grades and health because they can’t control the urge to be online. She’s treated people who have developed blood clots from sitting in front of their computers for hours on end.

Many of Young’s patients have chronic problems, like attention deficit disorder and obesity. They’re distressed, disinterested and disengaged. Some have trouble reading traditional, paper books because they’ve only read off tablet screens.

It’s difficult to pin down exactly which environmental or hereditary factors change brain composition, so research on brain development and technology use is ongoing.

Many Millennials may not need to pick up on traditional communication norms. Through their phones, they don’t have to filter social cues or subject matter.

Even Millennials have mixed opinions about this.

Grace Muller, 26, has deactivated her Facebook account. She tries to limit her daily time online to eight hours during her job at the community resource center Casa San Jose, and one hour at home.

“There’s not a lot of reason for us to be alone with our thoughts when you can have your phone with you 24 hours a day,” she said.

But some Millennials don’t think their generation is suffering in the communication department.

Kirby Shramuk, a Pitt student studying business and Asian studies, said Millennials don’t have bad communication skills. It’s just comforting for them to look at their phones when they’re surrounded by strangers.

Shramuk admits that sometimes, she keeps her earbuds in when she’s not listening to music. Like many other Millennials, whether they admit it or not, she brings her phone into the bathroom with her.

“I think technology is becoming a necessity in most everyday lives,” Shramuk said.

Millennials are bringing their phones into the classroom, too.

Deborah Good, a professor at the University of Pittsburgh’s Joseph M. Katz Graduate School of Business, has been teaching college courses for more than 30 years. She’s concerned about Millennials.

“[Their] attention is being paid to the info coming off smartphones,” Good said. “They interact in 140 characters or less.”

Millennials aren’t on the “same wavelength” as people from older generations, she added.

Erickson, who has been teaching for seven years, said he’s seeing a change in young people as well.

“Students are not coming to office hours very much and meeting with me one-on-one,” he said. “I think that students are much more comfortable sending email.”

In class, his students take to their phones. Instead of copying handwritten notes, they’re typing on laptops or snapping pictures of his presentation slides.

“I have mixed feelings about it, really,” Erickson said. “It’s hard to judge what’s good and what’s bad.”

Technology-attached Millennials are also on a collision course with other generations who might perceive their use in a negative way because they work differently.

“They pull out these cellphones in the middle of meetings … [and] cause a lot of angst in a corporation,” she said. “They’re great kids and they have a lot to offer. What they bring just needs to be focused in the right area.”

Heavy technology use might actually help with communication, said S. Shyam Sundar, a professor in the Penn State College of Communications and co-director of the Media Effects Research Laboratory.

Sundar said the idea that Millennials are bad at picking up emotional cues and can’t talk face-to-face is dated.

“I think we’ve come a long way from that,” he said. “In [a] sense, we are actually able to communicate more richly.”

Technology lets people constantly keep in touch, he said, regardless of age or geography.

A child can easily call his grandparents or send them a message. People across the world can challenge each other in the same video games. Texting is almost as instantaneous as speaking.

“They feel like they’re in the same frequency because of constant communication,” Sundar said.

Communication norms may even change with this new generation. Although face-to-face interaction seems to be the “gold standard” among older generations, he said it might not be viable in the future.

“Millennials might not even think about face-to-face as the ideal,” Sundar said. “Face-to-face might almost be an inconvenience and somewhat pointless.”

Amy Jordan, president of the International Communication Association, has conducted research on media effects in relation to health, primarily focusing on children school age to age 25.

Jordan said young people use technology to separate them from adult culture. They want to relate to each other rather than to their parents.

“I think it’s also normal that they would want to do that,” said Jordan, also director of the Annenberg Public Policy Center at the University of Pennsylvania.

But to keep that connection across generations, people may need to adapt to Millennial trends.

“I think it’s going to be important for the older generations right now to kind of keep in touch with younger generations through some of these technologies,” Erickson said.

70 thoughts on “Technology is changing the Millennial brain”