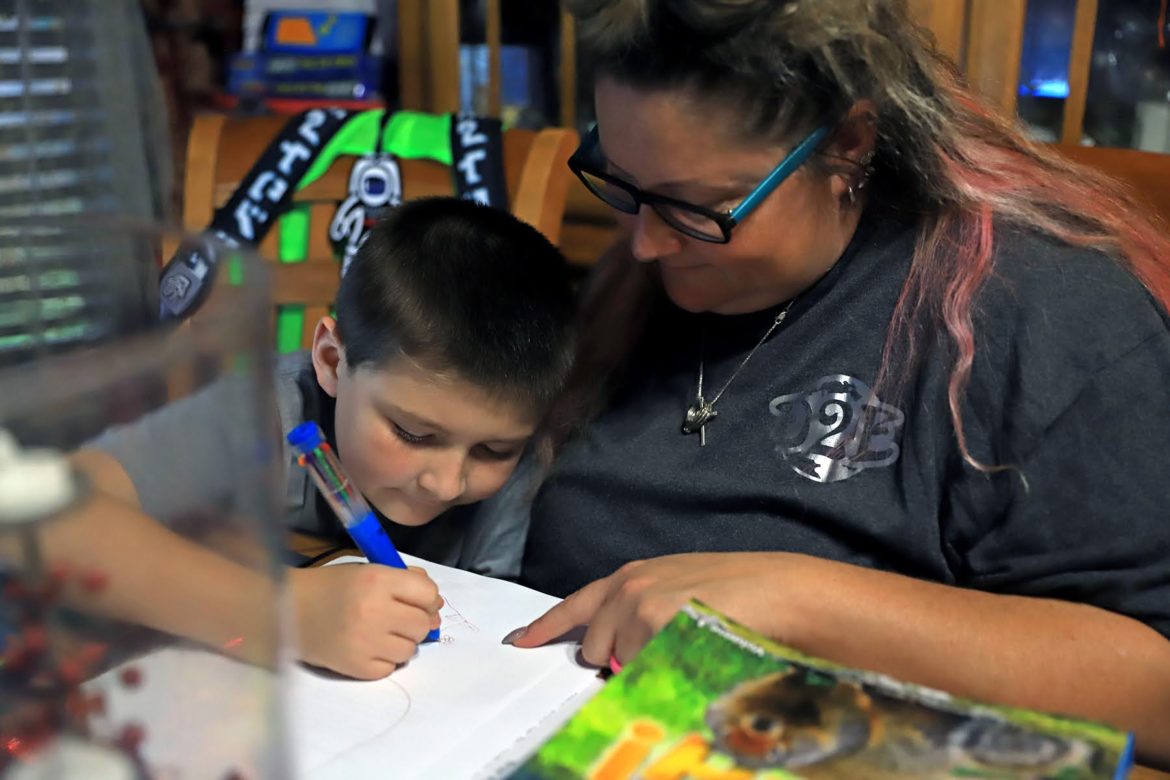 Sherri Kurtz and her son, Michael, taking a break from homework to draw. Sherri and her husband share duties helping Michael with his homework. (Photo by Jay Manning/PublicSource)

Back-to-school traditions were upended for many students as they returned to school this year: no long-awaited hugs from sunburned friends, no hallway time to catch up about their summer adventures and no in-person icebreakers to make connections with teachers.

Pittsburgh Public Schools's [PPS] nearly 23,000 students on Tuesday returned to school in an e-learning environment amid the COVID-19 pandemic. The district will be in full remote learning for the first nine weeks.

The return to school illustrated a new normal for thousands of families and teachers districtwide, as parents juggled work schedules with teaching and technical assistance and students struggled to get connected. 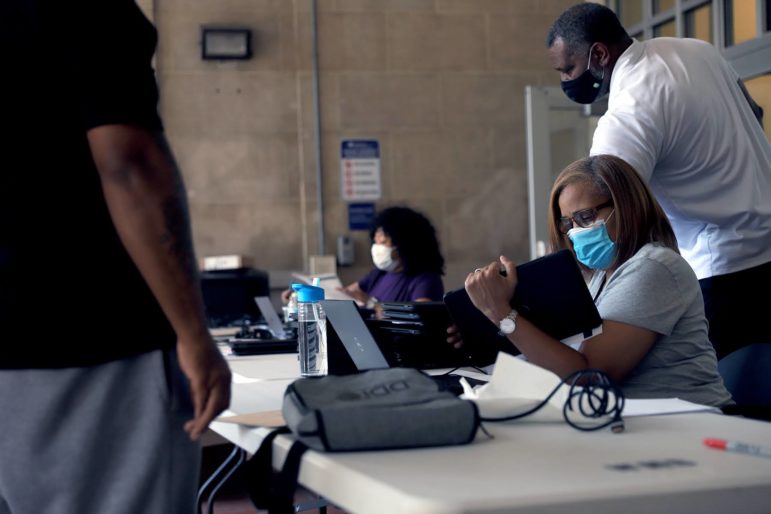 The first day of school followed a weeklong delay by the district because some students lacked needed devices. Some students still lacked devices on Tuesday, so the district offered laptop distribution at Pittsburgh Carrick, Pittsburgh Oliver and Pittsburgh Westinghouse. Students without technology relied on paper writing activities and lesson plans, the district said.

The district did not respond to requests for comment about the number of students who still lacked devices and the shipment of 7,000 devices it still awaits to provide each student with a district device, making the district 1:1.

Students and families were met with myriad challenges throughout the first days of school, including inappropriate cyberattacks by hackers and a lack of access to technology for some families.

Some who spoke with PublicSource described internet connectivity challenges with district devices that prevented students from connecting with classes and platforms such as Schoology and Microsoft Teams. Others described challenges with the adjustment to e-learning and juggling work and home life, with the two now melded together. For all we interviewed, their teachers and principals were a silver lining.

We spoke with some families across the district about their hurdles in the first few days of school and their hope for the future. Here are their stories.

If you or someone you know has a school experience this semester that you would like to share, please email tylisa@publicsource.org.

That’s how 14-year-old Sam Vicente recalls the first day of his freshman year at Pittsburgh Obama 6-12. He awoke before 7:30 a.m. — a drastic difference from the summer — to log into his home computer on the first day of school.

While he didn’t have his own technology issues getting connected, he was witness to the challenges many others faced.

Vicente said kids were unable to stay connected to the class, getting kicked out and unable to access it again. “The teachers were often hard to understand because it was kind of choppy,” he added.

On a normal first day of school, “We would have been moving from classroom to classroom and like meeting teachers and learning how they do things. Maybe starting to do a little bit of work.”

But on Tuesday, his biggest challenge was “trying to not be bored and really annoyed.”

“Annoyed about school … You’re not really doing anything important and you just feel like you’re just sitting in front of a computer all day, getting nothing accomplished,” Vicente said.

He wishes district leaders would consider shorter school days since school is completely online: “Give us a little bit more breaks because it’s hard to just sit in front of a computer for six hours.”

Leah McDougald of Homewood
Mother of Amina, 7, and Savannah, 16 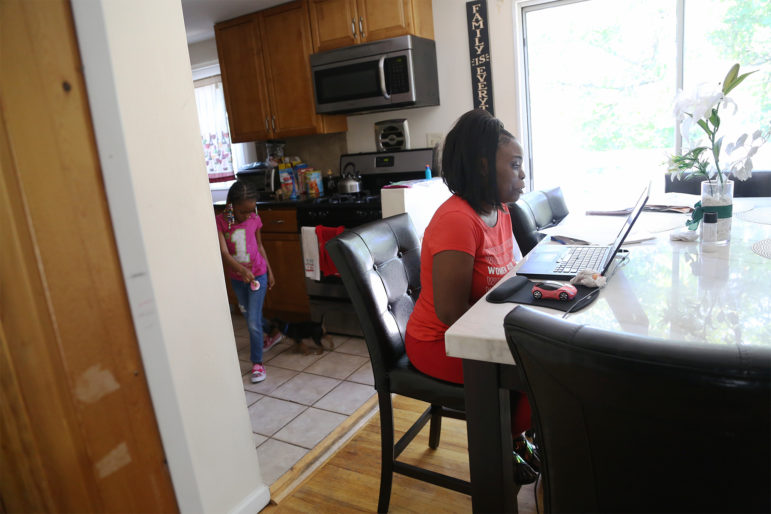 Leah McDougald works remotely at her mother's home in Penn Hills. McDougald's 7-year-old daughter Amina Sirmons, a second-grade student at Pittsburgh Montessori, is seen in the kitchen with their puppy, Cush. (Photo by Ryan Loew/PublicSource)

McDougald is a mother to two PPS students and spent the day juggling her 9-to-5 job working remotely for Duquesne Light Company while trying to help her daughters get connected with their classes and teachers.

“It was pretty frustrating and hectic because it’s like everybody has to know how to navigate the laptops, how to go to the subjects that the teacher wants you to go to,” McDougald said.

McDougald’s 7-year-old daughter Amina needed the most hands-on help. She’s a second-grader at Pittsburgh Montessori. To support Amina, McDougald taught herself how to find assignments and subjects and how to navigate and join meetings and classes on the school platforms. It was a lot, she said but became “smooth sailing” as she became familiar with the platforms.

“A lot of people are not technology savvy, not computer savvy, they don’t know how to navigate,” she said, “and I feel for a lot of these children that they might just give up, especially the ones that are going into high school, cause it’s like, they’re going to be lost.”

The second day of school, however, “was excellent” for her and her daughters. It made her hopeful, especially because connectivity issues were fixed.

Savannah “connected right away” on Wednesday after not being able to connect at all on Tuesday. McDougald helped her daughter Amina navigate the day and was still able to get her own work done.

“I thought it was going to be like it was [Tuesday], but it was a blessing that it wasn’t,” she said with a chuckle.

All Savannah Wood-Sirmons wants is to walk through the doors of her towering, historic beige school building, to see her friends, teachers and lessons face-to-face.

E-learning, she said, “is more difficult, and I like hands-on learning.”

On a normal first day, she would be “with a teacher, in a classroom” being taught face-to-face. But on Tuesday, Wood-Sirmons spent her first day of school with her mother and sister at her grandmother’s Penn Hills home, frustrated and struggling to get connected.

“My laptop wouldn’t work, and when I tried to do Microsoft Teams on my phone, it wouldn’t let me join any of the meetings,” she said.

When she spoke with her friends, some of them were able to log on and attend classes, but many agreed it was “pretty difficult to get on at first.”

She only made it to one class but says she couldn’t hear anything. Eventually, she gave up altogether. She was awash with relief when her teacher told her it wasn’t just her and that they would try to reconnect the next day.

Sherri Kurtz of Observatory Hill
Mother of Zoey, 6, and Michael, 9

As a mom who works Monday through Friday, Sherri Kurtz feels she has to make an impossible choice: “Either pay the bills or teach our kids.”

“And it shouldn’t be that way,” Kurtz said. “I understand that the teachers are working together and working with [students], but for how long?”

Kurtz has two children at Allegheny K-5: Zoey, 6, in first grade and Michael, 9, in fourth grade. 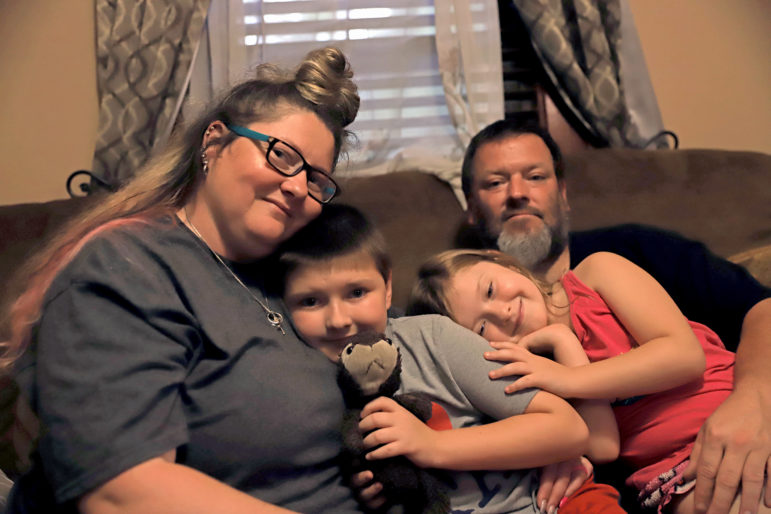 Zoey joined a handful of other classmates at a family friend’s house for the school day so they could navigate the first week together, an arrangement Kurtz expects to continue for the nine weeks of e-learning. For Michael, however, arrangements were a bit more intricate.

Michael’s first week of school and adjustment to e-learning was fraught with joy, panic attacks and tears. Michael has autism and attention deficit hyperactivity disorder.

Her son has an individualized education plan [IEP] provided for students with special needs. However, she says, “I have gotten nothing” when it comes to a clear IEP plan. The learning support teacher told her “‘If you need us, we’re here,’ but that’s about as far as I got,” she said.

Connectivity issues on the first day meant students had lots of play time, she said, which Michael thought “was awesome,” but the adjustment proved more difficult on days two and three. On Thursday, Kurtz received a phone call from a remote instruction program Michael was accepted to, saying he was overwhelmed and crying.

In the days leading up to school, Kurtz worried how she would ensure her son was in a good school environment and set up to learn.

“I need Michael to be comfortable, with people that he knows, and I can’t send my kid anywhere,” she said.

She learned that Michael was one of 45 students accepted to the Allegheny K-5 program inside the Sarah Heinz House on the North Side, where students go each day to complete remote instruction alongside instructional staff. She could finally breathe a sigh of relief. She said the program has nine classrooms of five children each.

For her, the program was a perfect solution.

“It gives me stability for my son just for the simple fact that I don’t have to stress or worry about him during the day.”