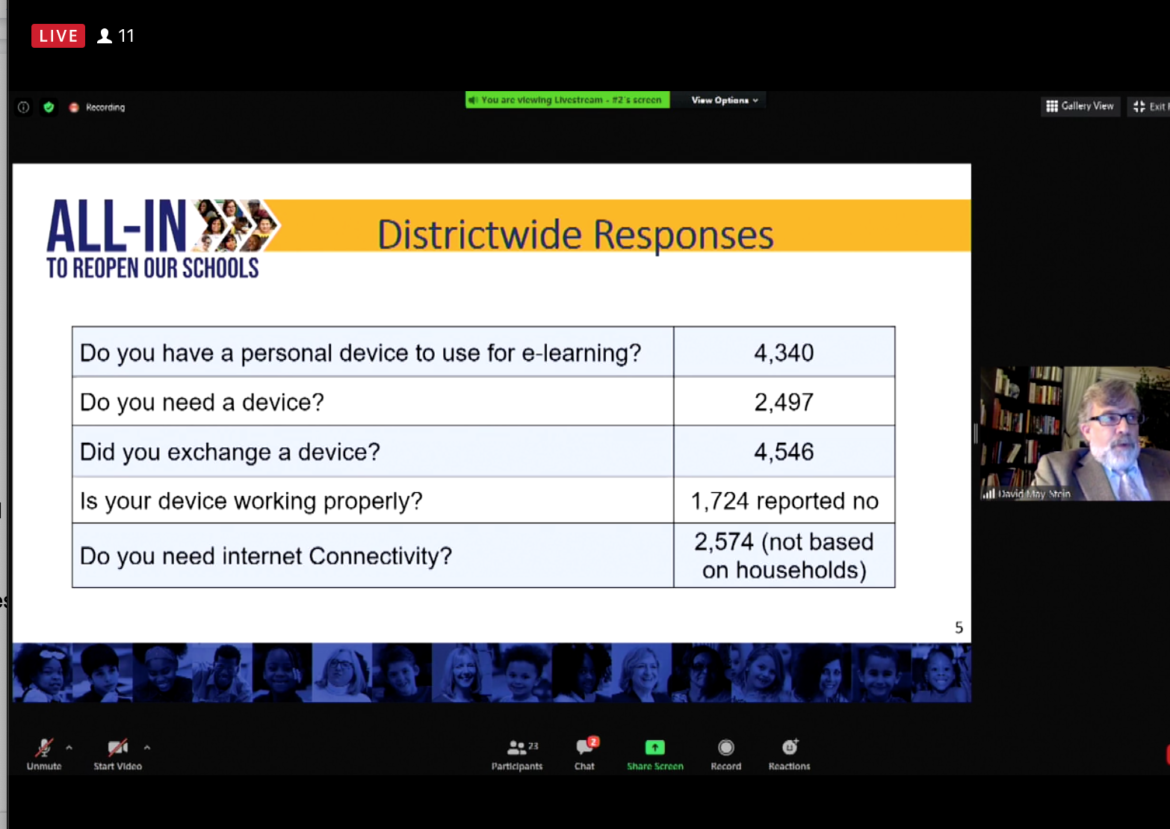 David May-Stein, chief of school performance is speaking about the responses to the student questionnaire being circulated by homeroom teachers at a meeting on Sept. 1, 2020. (Screenshot)

Sam Trumbull awoke to news Sunday that left him gobsmacked.

About 24 hours before Trumbull’s son planned to get online for what would be the first day of his freshman year at Pittsburgh Obama, Trumbull learned school would be delayed until Sept. 8. A robocall on Saturday evening from Pittsburgh Public Schools [PPS] attributed the last-minute delay to “unexpected delays caused by continued technology supply chain shortages across the county.”

Trumbull’s son is returning to the district after attending charter schools from first through eighth grades. As a parent getting reacquainted with the district during an unparalleled school year, Trumbull has been focused on staying up to date with constantly changing news.

He regularly checks the district’s website and social media. He spent Sunday morning scrolling through hundreds of passionate Facebook comments on the district’s page where he saw the school community airing frustrations, asking questions and vocalizing district support.

The district said at a Tuesday board meeting it found nearly 2,500 students still lacked devices for remote learning, according to a survey being circulated by homeroom teachers. Despite the week delay, students may continue to go without technology when classes start if the deliveries don't arrive before next week.

Parents who spoke with PublicSource said that while some technology delays were understandable, they were shocked, confused and frustrated with district administrators’ seemingly sudden decision to delay schools opening by a week. The parents also grappled with what they perceive as a pattern of poor communication from the district on critical updates as families work to best prepare their children for the return to school amid the COVID-19 pandemic.

Superintendent Anthony Hamlet said in a statement about the delay on the district’s website that it was done to “ensure all students have the opportunity to fully participate in e-learning.”

He continued that device distribution will be based on need, only for families without access to devices, in an effort to clarify mixed messages families received about who should pick up devices.

“By delaying the start of school we can ensure that no student is inequitably disadvantaged because they do not have access to the tools they need to start the school year successfully,” said Hamlet, who made the announcement just days after his contract was renewed through 2025.

Schools nationwide face shortages and extended delays in receiving technological devices, the most critical back-to-school equipment needed this year as many districts transition to online learning. The world’s three biggest computer companies, Lenovo, HP and Dell, have told school districts they have a shortage of nearly 5 million laptops, according to an Associated Press investigation in August.

The district placed its first technology order for 5,000 Dell laptops on April 19, more than a month after schools first closed.

A July report by the district suggested leadership knew shipment delays would occur, as the report noted all student devices likely wouldn’t be available until the end of October.

Trumbull said that while a delay makes sense to him, Hamlet’s letter left him with more questions than answers: Will more devices be delivered this week? Will school still reopen if not?

“To be told the day before … It’s hard and it seemed unnecessary,” Trumbull said. “And the letter left a lot of questions. It just didn’t seem to really make sense. The numbers didn’t make sense. There wasn’t a clear explanation of what’s going on.”

District spokesperson Ebony Pugh said the district won’t be completely 1:1, where every student has their own district device, until October.

The decision to delay school, she continued, was made by Hamlet late Saturday after expected technology shipments didn’t arrive. Up to 7,000 devices are expected to arrive the week of Aug. 31, she said, “But as we have learned, a lot of times the date that we get that they are coming,” they don’t arrive.

Along with delays in technology arrival, Pugh said need was greater than anticipated, with more people showing up at distribution sites than expected. 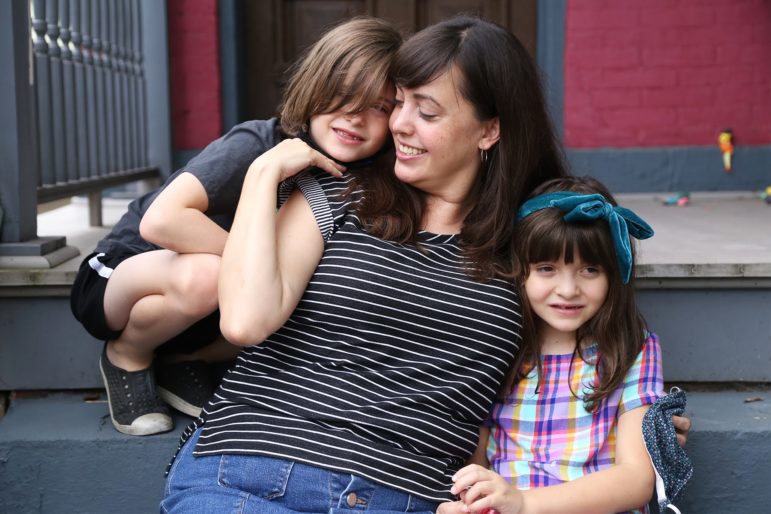 Some parents, including Beth Reiners felt “there’s no way that this was a surprise” to the district.

Reiners had a single thought after she listened to the district’s two robocalls on Saturday — the first to announce the delay and the second to clarify a misstated date: “I knew it.”

“They should have [delayed] months ago,” said Reiners who has two children at Pittsburgh Montessori and suspected school might get delayed while scrolling through Facebook comments on Saturday afternoon.

“I was glad they did it, ’cause I don’t want some kids to get left behind because they don’t have technology, but honestly, they had to know. They were 7,000 short,” Reiners said.

She continued, “They’re functioning as if every part of the machine that makes the school district is going to work and nothing is going to malfunction and everybody can drop their entire schedule or have child care. That’s just not the case.”

How many devices anyway?

On Tuesday, district officials reported to the school board that in recent days they identified 2,497 students who still needed devices through an individual student questionnaire being circulated by homeroom teachers. The questionnaire received about 15,400 student responses as of Tuesday. Students are still being counted; the district teaches about 23,000 students in total. More than 2,500 students also still need internet access, based on survey responses.

“Our district was promised devices,” Hamlet said at the meeting. “Our family needs devices. Our delivery dates from suppliers seem to be a never-ending moving target.”

He continued that in spite of the challenges, he was confident knowing PPS was not unique in its struggles; other school districts he spoke with faced similar issues.

Mark Stuckey, who was also announced as the district’s interim chief technology officer at the meeting, announced that the district distributed 9,199 student laptops to students in need, as of Aug. 30.

In the release to families on Saturday, the district said more than 1,800 students still have a device from last school year that won’t work for e-learning this year. They're expected to return the devices.

In the days leading up to the postponement, confused families were met with hours-long lines and device shortages at some of the district’s five distribution sites. Pugh said long lines only became a challenge after multiple days earlier in the month where district device exchanges and distributions saw low attendance.

Lisa McDonald doesn’t fault the district, “but I think it could be handled better.” McDonald has a son at Pittsburgh Montessori, a school she said has done a “great job communicating.”

But the district is a different story in her view.

“PPS is in a tough spot and their communication hasn’t been the best,” McDonald said.

Still, “I think it would be unethical to start school if all kids didn’t have the technology for it,” McDonald said.

For some families who spoke with PublicSource, patience is wearing thin.

Emily Pocratsky and other parents she’s spoken to have big concerns, both about the timing of the district’s decision “so close to the start of the school year” and about a continued lack of clear, reliable information. 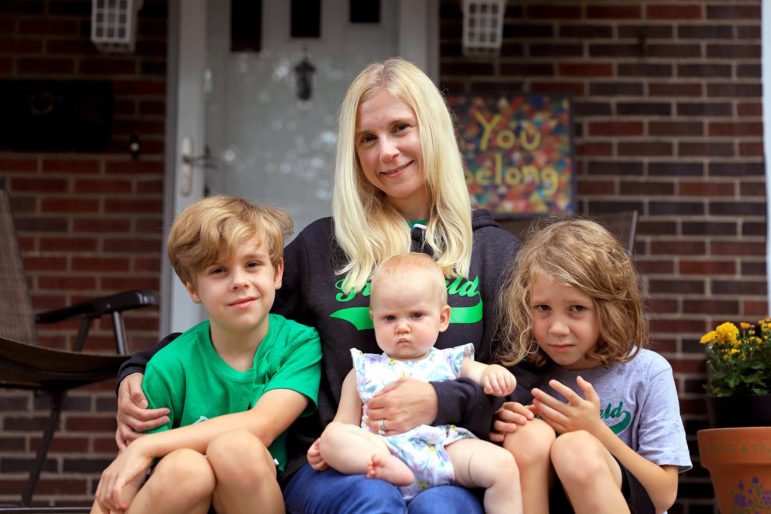 Emily Pocratsky with her children Noah and Theo, who are beginning third grade and first grade at Greenfield PreK-8, along with 8-month-old Meadow. (Photo by Jay Manning/PublicSource)

But between a flow of conflicting information and updates, Pocratsky said, “It’s really a burden for a lot of families and it seems to be going beyond that reasonable patience that we all should have during COVID. … They might not control the supply issues but they certainly can control the way they communicate this information.”

She’s spoken with neighbors, watched webinars, read board meeting minutes, listened to district robocalls and monitored Facebook frequently, all in an attempt to keep up with the changes regarding student technology.

At some point, she said, confusing communication is less about the “emergency situation; it’s about accountability for the management of how they get these messages out.”