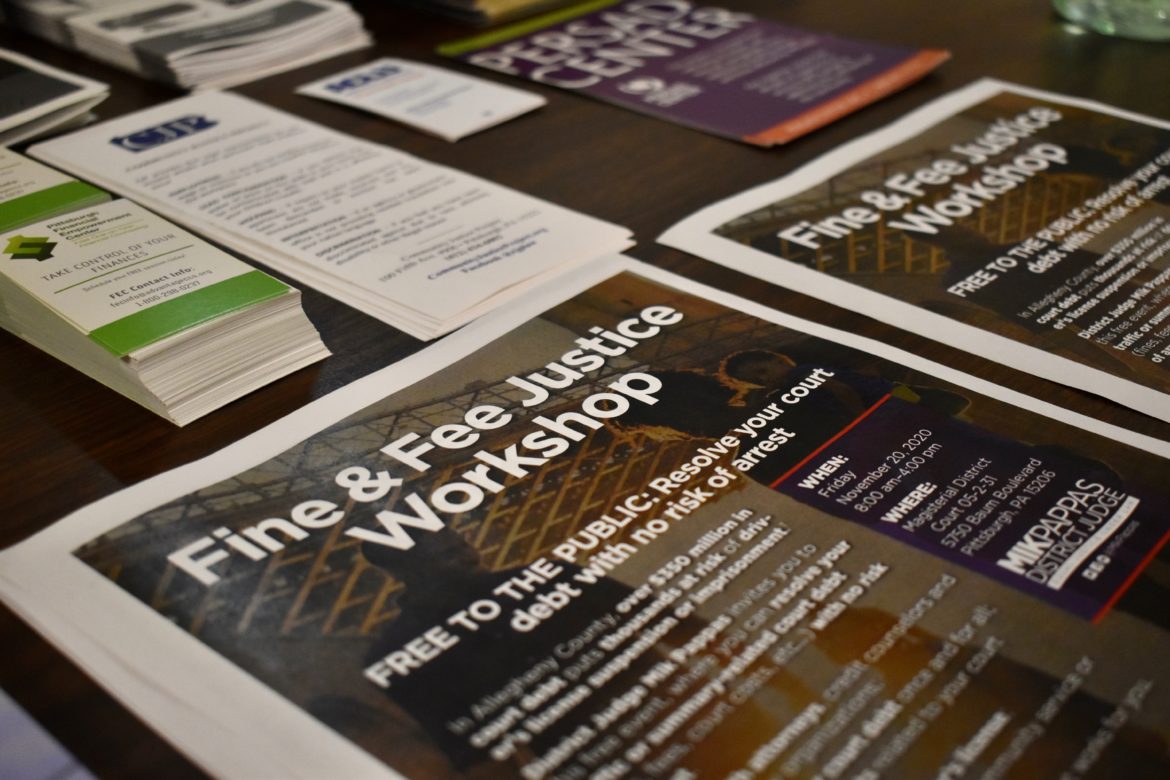 The first Fine and Fee Justice Workshop was part of a countywide initiative to implement court debt reform. (Photo by Juliette Rihl/ PublicSource)

Diona Brown was at Pittsburgh Municipal Court last month for another case when she learned she had two outstanding court fines for when she was at school, two decades ago. Both were for truancy, dating back to 1999 and 2000. She was 16 years old.

It was so long ago that Brown couldn’t even remember why she’d missed school. “Who knew once you grow up you have to take care of that stuff?” she said.

The outstanding amount totaled $404.50. For Brown, who’s been staying at home caring for her three children while they attend school virtually, the amount is insurmountable. “I don’t know how I’m going to pay $400. I can barely do anything now,” she said.

So on Nov. 20, Brown attended Allegheny County’s first Fine and Fee Justice Workshop, presided over by Magisterial District Judge Mik Pappas. Her payment determination hearing was one of 29 that took place at the East Liberty courtroom that day. 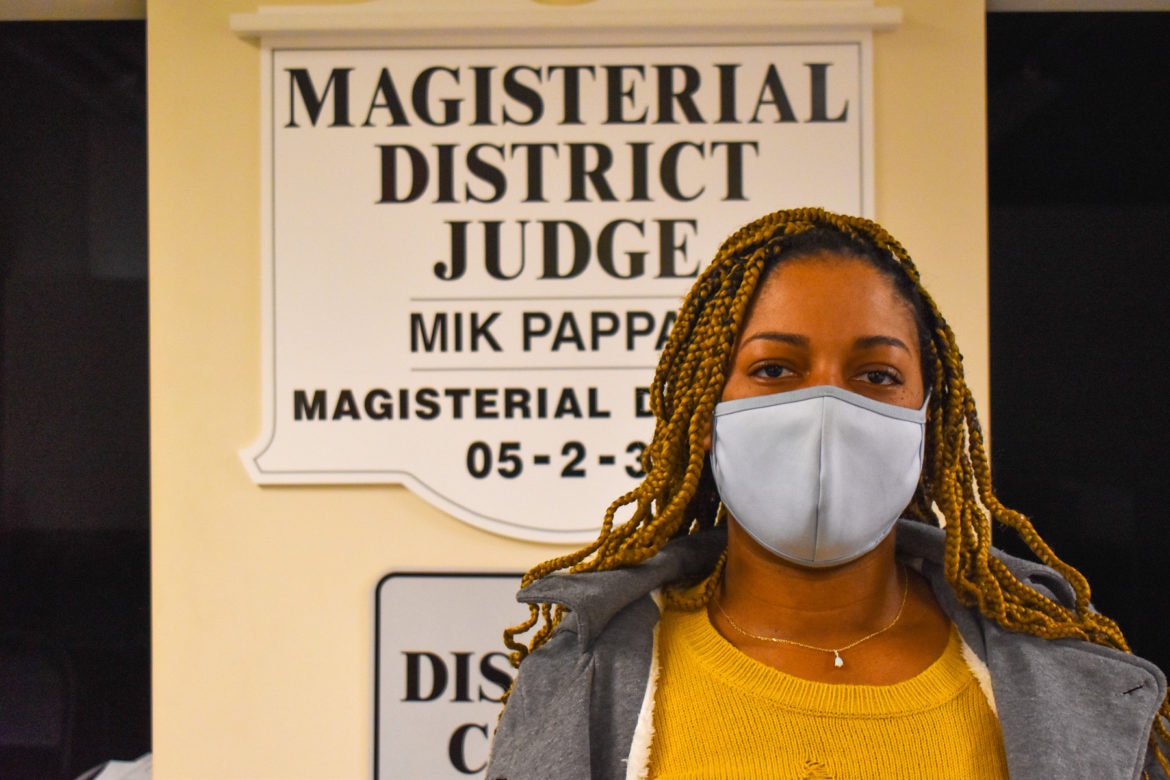 The workshop’s approach was comprehensive: local organizations were there to offer community service opportunities and free financial counseling. A pro-bono lawyer helped her make sense of her paperwork and gave legal advice. Pappas worked with her to go over her individual circumstances and come up with options for satisfying the debt, be it a payment plan or community service.

“What do you think would work for you?” Pappas asked Brown. The judge and Brown settled on 16 hours of community service over the course of several months, at a rate of $26 per hour. The rate is recommended by Independent Sector, a national nonprofit organization that estimates the value of volunteer time in each state.

Brown left the hearing feeling relieved. “It helped me out good, because I thought my only option would be a payment plan,” she said.

The goal of the daylong workshop, which was part of the county’s new Fine and Fee Justice initiative, was to provide individuals with avenues and resources to resolve their court debt. As of 2019, Allegheny County had $350 million in unpaid court debt on the books. Unpaid fines and costs — even for minor infractions — can lead to warrants, a suspended license and, in the most serious cases, jail time. Following a PublicSource investigation, the county was one of 10 municipalities selected by the Fine and Fee Justice Center to join a national reform initiative called Cities and Counties for Fine and Fee Justice. The initiative is being led locally by Allegheny County Council member Bethany Hallam and Brad Korinski, chief legal counsel in the Office of the County Controller.

While the workshop may seem like a novel approach, Pappas said some courts already apply the same framework to other types of cases. For example, truancy cases are often grouped together on the same day, with resources and support services available on site. “So the idea of the workshop is really to do the same thing, but to do it for payment determination,” he said.

Due to an administrative order from President Judge Kim Clark, Pappas was able to preside over any cases occurring in Pittsburgh, not just cases in his own district. Individuals with hearings were able to participate over the phone or in-person, with walk-ins accepted. Most of the hearings were for building code violations or truancy cases, Pappas said. 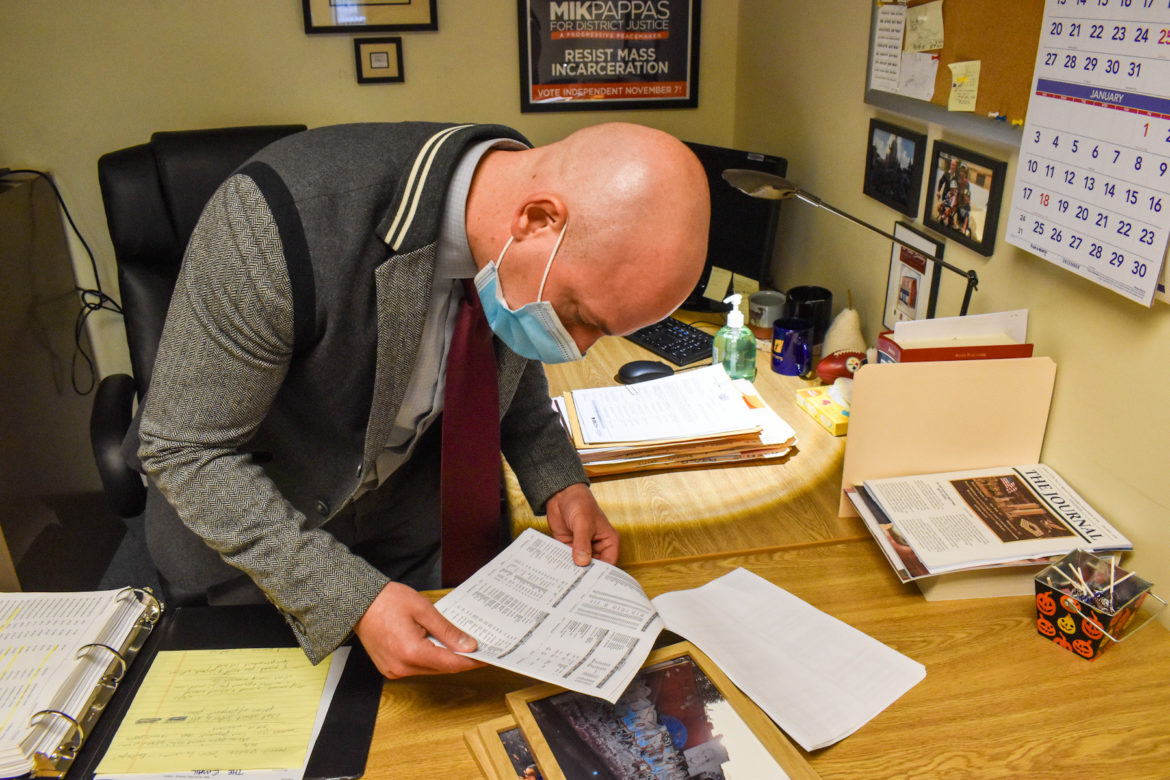 Magisterial District Judge Mik Pappas reviews records detailing the unpaid court debt in his district. There is over $651,000 in debt on a total of 2,208 cases. The cases date back as far as 1991. (Juliette Rihl/ PublicSource)

Porchea Andrews, Garfield Green Zone and public safety coordinator for the Bloomfield Garfield Corporation, was there connecting workshop attendees with community service opportunities. She’s been developing the 1520 Adjudication Alternative Program, a restorative justice program that allows eligible individuals to satisfy their debt or other court obligations through service and self-improvement activities. Activities include planting trees, installing stormwater landscaping and native pollinator gardens in partnership with the Audubon Society. “These are all resume builders, and we’re hoping to get employment partners involved so that when [individuals are] finished with the program, there are employment opportunities,” Andrews said.

Becky Johnson is the program manager of the Pittsburgh Financial Empowerment Center, a city program that offers one-on-one financial counseling. She offered attendees free counseling, including reviewing credit scores, making payment plans and outlining budgets, which could count toward individuals’ community service hours. “I don’t think people realize there’s services out there to help with this process, and you can have an accountability partner,” she said.

For many people, paying off their court debt can be daunting. Pappas said his court has been trying to find alternatives for issuing warrants, which are administratively taxing, costly, and difficult to keep track of. On top of that, warrants can often feel “coercive,” he said, causing many people to shy away from showing up to court. “The perception is, if I go to court, I’m going to go to jail...” Pappas said. “How do you address that? How do you change that dynamic?”

Pappas said he plans to hold more workshops in the future and hopes other judges will consider implementing similar programming. By turning unpaid court debt into community service and financial literacy opportunities, he said, it has the potential to benefit both individuals and the community-at-large. “There’s a lot of value in it,” Pappas said. “There’s a lot of value in people. You just have to give them an opportunity to show it and earn it.”