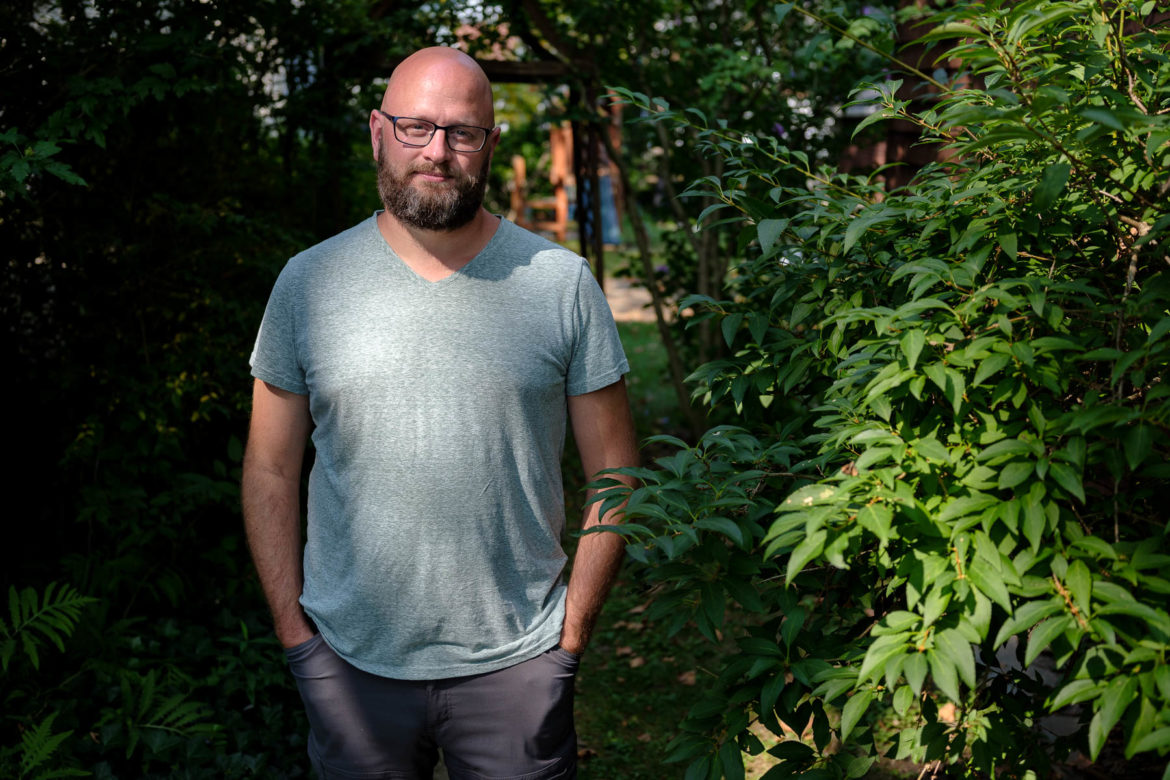 Alex Osgood photographed at his home in Regent Square. (Photo by Quinn Glabicki/PublicSource)

Alex Osgood lost his job selling wine to restaurants when the pandemic hit, but he gained a more intimate connection to his three young children at home.

“We’ve been together for so long,” Osgood said. “We’re bonded.”

His wife works remotely as a mental health therapist once a week and does maintenance work for assisted living facilities the rest of the time. That brings in enough income to keep the household afloat. But the Regent Square family’s finances are still tighter than they’d like, said Osgood, 39.

It proved difficult for him to find a job that would reasonably offset childcare costs — which he estimates as at least $1,500 a month — so for much of the pandemic, Osgood has not been actively looking for a job.

With his children returning to school soon, he’s looking again. But the experience has made him doubt whether the restaurant industry really fits him anymore.

“I don’t want to be the dad that’s never there, and I think that the pandemic’s really given me a clear perspective on what I want in terms of a work-life balance,” Osgood said, explaining that he wants to be productive, while avoiding “something that is going to suck up my entire life.”

Osgood finds himself in a similar predicament as many others in the Pittsburgh area and around the country: there are jobs available, but due to pay, hours or the nature of the work, many of them don’t make sense to take. Businesses are having difficulty hiring and maintaining workers. Some are extending remote work or raising pay, though the disconnect between open jobs and workers willing to fill them is particularly pronounced locally.

The Pittsburgh region's labor market shrunk to levels not seen since the early 1990s. And its rebound has been slower than the national average and other similar metro areas. While jobs continued to grow over the last month, the region has a long way to go, even as the Delta variant prolongs the pandemic.

“We’re really at our COVID low, still,” said Chris Briem, an economist for the University of Pittsburgh Center for Social and Urban Research.

Jeffrey Katrencik felt so determined to open a restaurant that a global pandemic couldn’t stop him.

Carmen Tacos in Finleyville sold take-out meals only for the first six months, and in May 2021 began to offer indoor dining. While Katrencik gets more business now, he has run into difficulty with staffing.

“This hiring thing is no joke,” Katrencik said. “The workforce is depleted, the restaurant industry workforce, and then the people that I do get, retention is harder. It’s just very weird. It’s a completely new territory.”

A few businesses in the Pittsburgh area have garnered media attention, including some appearances in national media, for raising wages amid the labor shortage. Klavon’s Ice Cream Parlor in the Strip District raised its wages to $15 an hour and told several media outlets that it received tons of applications after having severe difficulties hiring.

Kennywood, along with its sister parks Idlewild & SoakZone and Sandcastle Waterpark, raised wages for its adult seasonal workers to between $13 and $16.

Gov. Tom Wolf, who supports a $15 minimum wage, said in a May press release that businesses would benefit from an increased minimum wage. “Boosting wages also increases productivity and decreases turnover,” Wolf said. 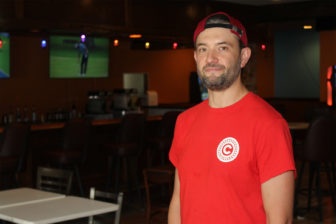 Katrencik employs about eight to ten people at a given time. He pays his workers more than minimum wage but less than $15 an hour.

“There is a point though where small businesses, startups like mine, we just can’t pay any more. It doesn’t make sense monetarily; we’re just starting,” Katrencik said.

There are other ways businesses are trying to appeal to workers, such as allowing more remote work.

Scott Pipitone runs Pipitone Group, an advertising agency that’s been around for about three decades and employs about 40 to 45 people.

Before the pandemic, workers could spend one day a week working at home. Then everyone worked fully remote for much of the pandemic. After the rollout of the vaccine, Pipitone brought workers back but began offering two remote days each week.

Pipitone sees offering two remote days as reasonable but has found that isn’t enough for some workers.

“It’s really tough hiring folks right now,” Pipitone said in mid-June. “We’ve lost candidates because they want to work remotely all the time or four days a week, come in there once a week. It’s like, for that role, no. I don’t think it’s old school.”

How bad is the shortage?

Pittsburgh’s labor force has been hit particularly hard, and the shape of its recovery remains to be seen.

The size of the Pittsburgh region’s labor force, which includes current employees and out-of-work people actively seeking a job, shrunk below the worst of the pandemic in May 2021, according to data compiled by Briem, the economist.

“We have not moved off our low, which reflects all of the loss last year,” Briem said in mid-July. “So that’s the challenge, and that’s sort of the most troubling issue for the region going forward.”

The Pennsylvania Economy League of Greater Pittsburgh looks at the situation more positively, though still acknowledges stark difficulties. In May 2021, the league points out, the Pittsburgh area experienced a 10.4% increase in employment alongside an increase of 105,700 jobs over May 2020.

“There’s this perception that, because of the stimulus checks, that the unemployed worker is just sitting around saying, ‘Well, why should I go work when I’m only going to be making a little bit more than if I sit at home?’ And that’s not what’s going on.”

“We’re seeing that rebound,” said the league’s Vice President of Market Research Jim Futrell in mid-July. “We’re seeing our region regain the jobs that we lost. But the other part of it is we have regained, proportionately, a smaller percentage than the U.S. or our benchmark regions.”

Briem said he believes the impact of college students on the labor force could be a notable factor. Because most students attended class remotely after the pandemic’s start, out-of-towners who would have otherwise picked up work in the region did not actually reside in the region while in school.

It’s possible that, come the fall, more students returning to colleges in person could lead to increases in the workforce, just as children returning to K-12 school could allow more freedom for parents looking to return to work. But many residents are finding that the job market has not kept up with their needs, if they can even find a job.

Barney Oursler, executive director of the Mon Valley Unemployed Committee, said there’s a lack of certain types of jobs, in part based on people’s fear of contracting the virus. He’s seen a lack of work in home health care, for example.

“A lot of those jobs have not come back. Old people are afraid to have folks coming into their home … Child care is not just expensive, but it’s also not available,” he said, citing a national trend of job loss in the childcare industry.

Kacy McGill, one of the founders of Greater Pittsburgh Restaurant Workers Aid, was laid off from their work in the restaurant industry at the start of the pandemic. McGill helps connect local restaurant workers to opportunities like food banks and health care and hosts workshops and other programming.

Workers tend to have a complicated relationship with the industry, McGill said. 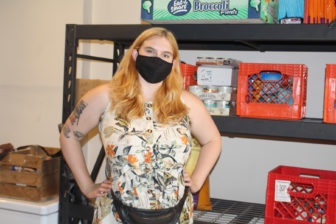 Kacy McGill, one of the founders of the Greater Pittsburgh Restaurant Workers Aid.  (Photo by Matt Petras/PublicSource)

In his work for Pittsburgh Black Workers Center, Jamaal Craig said he’s found that Black workers in particular are often frustrated by a job market that just doesn’t mesh with what they need or want.

“The thing that I hear the most is that everything’s service-related,” said Craig, an organizer with the center. “You know, ‘I’m looking for a job that’s gonna utilize more skills than making a hamburger or wiping down a toilet.’”

He’s also become aware of the ways the job market is especially hostile toward Black residents.

Michael Ernette began assisting the Mon Valley Unemployed Committee when he lost his job at a manufacturing company in early 2021.

“The thing that I hear the most is that everything’s service-related. You know, ‘I’m looking for a job that’s gonna utilize more skills than making a hamburger or wiping down a toilet.’”

“One of the things I find frustrating is that the unemployed worker is not being taken on good faith,” Ernette said. “There’s this perception that, because of the stimulus checks, that the unemployed worker is just sitting around saying, ‘Well, why should I go work when I’m only going to be making a little bit more than if I sit at home?’ And that’s not what’s going on.”

Ernette, 48, who resides in Ruffs Dale in Westmoreland County, has worn many hats throughout his life. He has worked as an EMT, in food service and he has served in the Navy. Now, he’s unemployed and looking for work.

He’s going to attend the Westmoreland County Community College in the fall to pursue long-term interests in writing, communications and the labor movement, but he needs work in the meantime. He’d like to take a job he could work remotely, like for a call center, but the area he lives in has internet speed that’s far too slow. He’s been turned down for jobs after failing internet speed tests.

He’s unsure exactly what he’s going to do. He figures he’s part of what’s being referred to as The Great Reassessment: a phenomenon in the current American economy in which workers are drastically rethinking what part they should play.

“Since the pandemic, there are people that are reassessing where they’re going,” Ernette said. “For a lot of people, it’s child care, and, ‘Do we really need two incomes?’ For me, it’s I don’t really want to be slugging drywall for the rest of my life. I want the rest of my career to be something that I enjoy.”