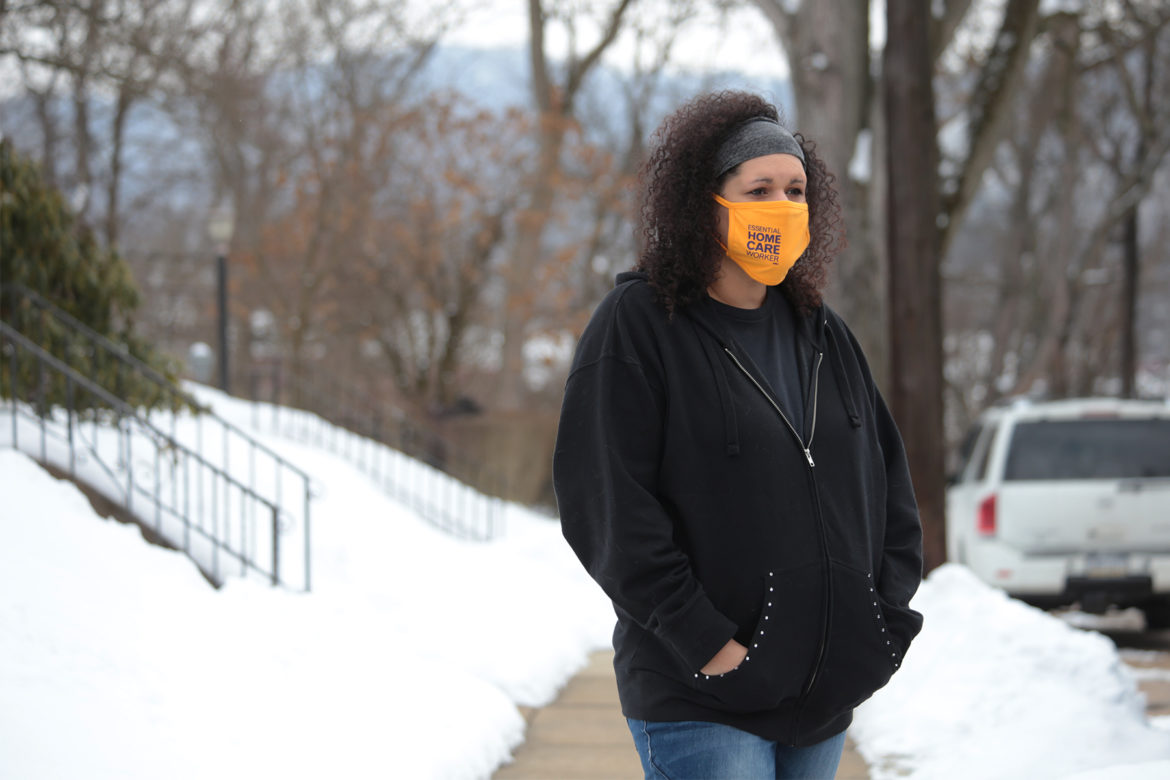 Erica Payne, a 44-year-old West End resident, left her full-time job as a social worker to help take care of her mother. Payne works about eight to 10 hours a week caring for another elderly individual, earning $12 an hour, and she takes jobs like food delivery. (Photo by Ryan Loew/PublicSource)

Christoria Hughes has worked about 13 years for UPMC as a dietary worker, preparing and serving food for patients. She started just above minimum wage and saw slow raises over the years.

In 2012, she participated in the first wave of activism in the Pittsburgh area for a minimum wage increase to $15 an hour. Over the past decade, this policy proposal has become more popular among Democrats, now backed not only by progressive activists but also the vast majority of the party, including President Joe Biden and Pennsylvania Gov. Tom Wolf.

Hughes is glad to see this. But the embrace of a $15 minimum wage is years too late, she said, and falls short of what workers need for a livable wage. 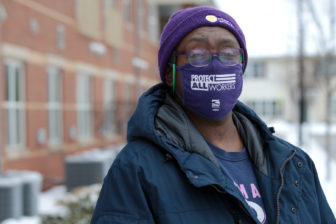 Christoria Hughes, 64, has worked about 13 years for UPMC as a dietary worker, starting just above minimum wage and seeing slow raises over the years. She worries that $15 falls short of what many workers need for a livable wage. (Photo by Ryan Loew/PublicSource)

UPMC pledged in 2016 to raise entry-level pay to $15 an hour by 2021, but while her wage has almost doubled in her time at UPMC, Hughes doesn’t feel like her life has gotten much easier.

“I don’t own a car. I live in subsidized housing. You know? Those types of things,” Hughes said. “When you’re young, you say, ‘Oh, I can make it’ on whatever the minimum wage was back then. But as you get older, you see you can’t make it because the minimum wage isn’t going up any.”

In 2013, then-President Barack Obama proposed an increase in the minimum wage to $9 an hour, and Hillary Clinton proposed a $12 minimum wage increase preceding her 2016 run for president. Today, the majority of Democrats support a $15 minimum wage, and even some Republicans.

However, conservative opponents and industry groups warn a minimum wage hike would burden businesses and cost jobs, while progressives and workers wonder if $15 may fall short of what workers actually need.

Biden’s $1.9 trillion American Rescue Plan includes a gradual raise in the federal minimum wage to $15 an hour over the course of four years. This proposal would also eliminate the separate, highly reduced minimum wage for tipped workers, currently $2.13.

The full-time, annual salary of a worker making $7.25 an hour is $14,500, about $1,700 above the poverty line for a single-person household and about $2,700 below the poverty line for a family of two. Because of racial and gender pay gaps, a $15 minimum wage increase would most benefit women and people of color.

The Congressional Budget Office scored a roughly equivalent $15 minimum wage plan and noted that it would raise worker earnings, while also costing jobs. Biden has privately told governors that the minimum wage provision will likely be dropped from the aid package, though he still supports the policy.

Currently, 29 states have adopted a minimum wage increase higher than $7.25, including nine states that have either already adopted or are legislatively on track to adopt a $15 minimum wage, but not Pennsylvania. Earlier this year, Wolf announced a proposal, similar to past pushes, to immediately raise Pennsylvania’s minimum wage to $12 an hour in July, with annual 50-cent increases until it reaches $15 an hour in 2027.

If there's no change at the federal level, the fate of worker pay depends on state politics, where the governor's office and Republican state house have long been at odds.

Fetterman, currently running for U.S. Senate, has advocated for a $15 minimum wage increase for years.

“I’ve always known it to be true from the experience that I’ve had here in Braddock,” Fetterman said, referring to the borough he served as mayor for nearly 15 years. He said he’s seen families struggle to get by on low wages, and it frustrates him when a low-wage worker is portrayed as a teenager working their first job.

Fetterman said Wolf’s plan for gradual increases may be more palatable to state Republicans. In attempting to portray the minimum wage as an issue with potential for bipartisan support, Wolf points to Florida, a state with a Republican governor and a Republican-controlled Legislature that voted for Donald Trump in both 2016 and 2020; Florida passed a $15 minimum wage in November.

“Right now, the economy is struggling, and this is not the time to add additional taxes or burdens on struggling businesses who are trying to employ as many people as they can to get their businesses up and running,” said Gaydos, R-Aleppo.

“I would love to see all sorts of ways that we could enable people to earn more money, and I do believe that starts with increasing skills sets. But we also have to get people back into the workplace.”

Gaydos chairs the Subcommittee on Small Business and ran a small business that sold data before entering the state Legislature. Among other duties, she was in charge of hiring and setting wages for her workers.

“I paid them more than minimum wage, because, again, it’s the free market, and in order for me to get the level of employees I needed for my business, I paid them more,” Gaydos said. “And that’s the way it should work.”

She said she believes it would be better for the government to help residents increase their skill sets rather than increasing the minimum wage.

“I would love to see all sorts of ways that we could enable people to earn more money, and I do believe that starts with increasing skills sets,” Gaydos said. “But we also have to get people back into the workplace.”

The Pennsylvania Chamber of Business and Industry opposes an increase to $15 for similar reasons.

Halper said he agrees that something should be done to help low-wage workers but believes increasing the minimum wage to be an outdated, unhelpful way to do it. He pointed instead to an Earned Income Tax Credit initiative in Philadelphia, which allows workers to keep more of their pay, as an example of a good alternative.

The Greater Pittsburgh Chamber of Commerce, an affiliate of the Allegheny Conference on Community Development, does not support Wolf’s proposal but said it is "ready to work with public and private partners to review the issue" and is assessing the impact on area businesses.

“It’s shocking to me that our minimum wage is $7.25 an hour. And you’re just expected to live off of that.”

Earlier this month, the Congressional Budget Office [CBO] evaluated the Raise the Wage Act of 2021 (virtually the same as the proposal within Biden’s larger pandemic response bill) and reported mixed results. The CBO estimated a decline of 1.4 million workers but also a reduction of 900,000 individuals living in poverty.

The CBO also estimated a cumulative net gain in earnings among all affected workers of $333 billion over 10 years. The CBO estimates that 27 million workers who would normally make below or slightly above $15 an hour would receive a raise once the full increase takes effect.

In a February analysis of the CBO report, the left-leaning Economic Policy Institute affirmed most of the CBO’s findings, such as the reductions in poverty and increases in earnings for low-wage workers, but instead posited there would be little to no job loss.

When PublicSource spoke to Fetterman Feb. 12, he had not seen the CBO report but deemphasized the significance of job loss associated with raising the minimum wage.

“If there’s logic and decency in that approach, then why have a minimum wage at all?” Fetterman said. “‘Hey, there might be some poor, desperate sucker that would do it for $4 an hour,’ ya know? That would increase more jobs.”

What it means for workers

Francis Nolan Adams, a 71-year-old living in Washington, remembers working a minimum wage job as a teenager in 1963, when it was $1.25 an hour. After 58 years, the minimum wage has increased just $6.

“I don’t even know how they can comprehend that this makes sense,” Adams said.

Adams believes an increase to $15 would be a good start, though he wants it to take effect immediately, rather than over several years. He makes $10.50 an hour as a homecare worker, sometimes less when working odd jobs in retail.

“It’s a struggle,” he said. “I’m lucky enough to have Social Security in my age, but it still doesn’t put me in another category where I can live, like, really comfortable. I can sustain, but I can’t grow. And that’s the problem with minimum wage. It’s just hard to get ahead.” 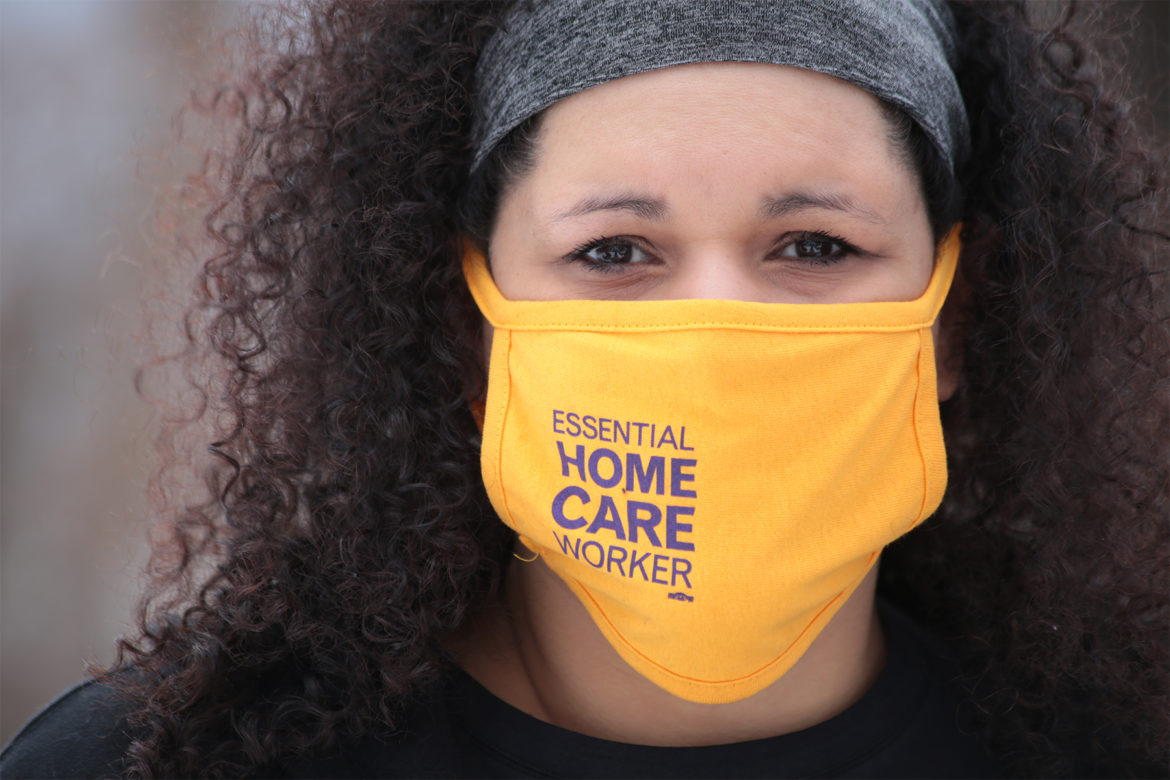 “Fifteen dollars really wouldn’t do too much for us,” said Erica Payne. “It would be a great start, but, you know, 17 would be better. Eighteen would be better.” (Photo by Ryan Loew/PublicSource)

Erica Payne, a 44-year-old West End resident, left her full-time job as a social worker to help take care of her mother who requires help with essential tasks like getting dressed and cleaned.

To collect an income, Payne works about eight to 10 hours a week caring for another elderly individual. She earns $12 an hour and also takes odd jobs like food delivery.

“Fifteen dollars really wouldn’t do too much for us,” said Payne, who serves as a member lobbyist for SEIU Healthcare Pennsylvania. “It would be a great start, but, you know, 17 would be better. Eighteen would be better. We’ve been fighting for $15 an hour for... nine years. Back in 2012, $15 would have gone a lot further than it does now. In Pittsburgh, you’re lucky to [get] a one-bedroom apartment for less than $1200 a month.”

A January report from the Pittsburgh Wage Study from the University of Pittsburgh supports Payne’s comments. The report, which surveyed hospital workers in Western Pennsylvania, found that workers making $15.16 to $18.76 an hour did not experience less hardship than those who make less, in part because higher income impacts eligibility for government benefits.

It’s not until a worker makes at least $18.77 an hour that the study found “higher life satisfaction, and better self-reported health than all groups of workers paid less,” according to the report.

Adriana Jurado, 24, makes $12 an hour as a research assistant for The Pennsylvania Center for Women and Politics, a project of Chatham University, where she studies political science. When she first moved to Pennsylvania, she was earning just above minimum wage at $8 an hour and found the cost of living to be quite expensive in Pittsburgh.

“It’s shocking to me that our minimum wage is $7.25 an hour,” Jurado said. “And you’re just expected to live off of that.”