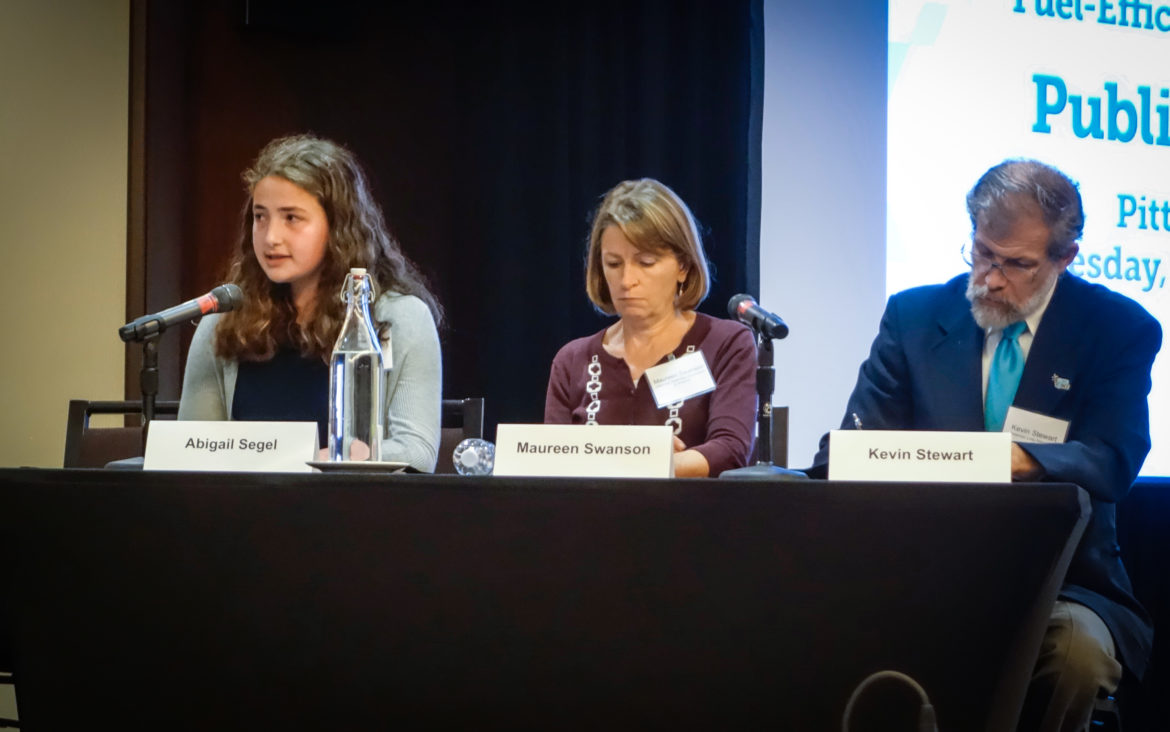 Abigail Segel, a sophomore at Allderdice High School, spoke out against a proposed rule change to federal vehicle emissions standards that would likely increase pollution. (Photo by Oliver Morrison/PublicSource)

The speakers, which included a number of local leaders and health advocates, argued at the federal public hearing that the new rules would undercut local initiatives to reduce air pollution and fight climate change. A representative for Pennsylvania Attorney General Josh Shapiro also hinted that after the hearing is over and the rule has been decided, Pennsylvania and other states could sue if the new rule is adopted. 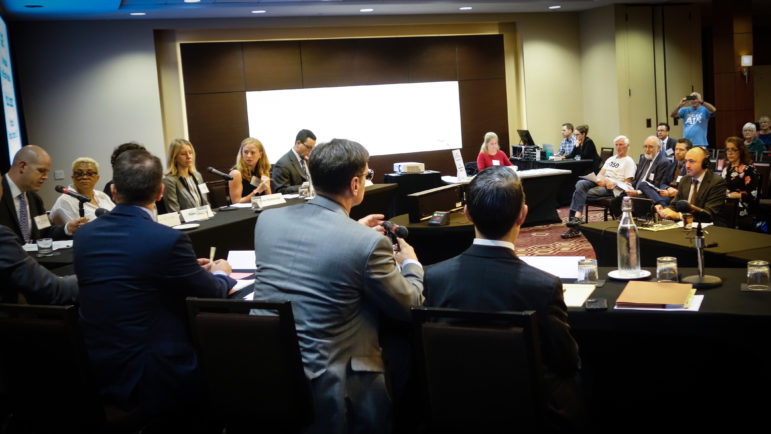 In downtown Pittsburgh Wednesday, more than 140 people were scheduled to speak about a proposed rollback of regulations that require car manufacturers to continue increasing vehicle fuel efficiency through 2026. (Photo by Oliver Morrison/PublicSource)

The new rule proposed by the Trump administration would reverse an Obama administration requirement that car manufacturers increase the fuel efficiency of their vehicles above 50 miles per gallon by 2026 and instead allow manufacturers to stop improvements at around 35 miles per gallon in 2021. It would also take away California’s ability to set its own higher emission standards, which Pennsylvania currently follows.

Environmental advocates argued that the program was one of the most successful for reducing pollution and fighting greenhouse gases that cause climate change. The Trump administration is arguing that, under the rule as is, the cost of cars would go up in the short term and, though the data has been challenged by scientists, could increase the number of traffic fatalities.

More than 140 individuals were set to comment on the proposal in front of four representatives from the National Highway Traffic Safety Administration and the U.S. Environmental Protection Agency [EPA]. The speakers were each granted three minutes. The one speaker before noon who didn’t clearly speak out against the rule spoke in favor of policies that would require more ethanol, rather than directly for or against the proposal. 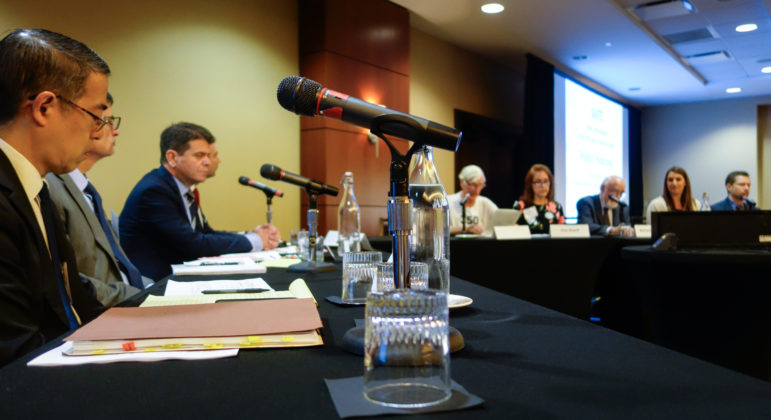 Four representatives from the NHTSA and the EPA were scheduled to listen to more than 140 speakers who signed up to comment on the proposed change to vehicle emissions standards on Wednesday in downtown Pittsburgh.

Those who weren’t able to speak at the hearing can still send in comments online up until Oct. 26.

Here are some highlights from speakers at the public hearing on Wednesday morning:

Abigail Segel, a sophomore at Allderdice High School, signed up to speak at the hearing after learning about environmental issues at summer camp and then getting involved with the local environmental group PennEnvironment.

“In my decade and a half living in America, I have inhaled the equivalent of about 5,500 cigarettes, when in reality I’ve never touched one,” Segel said as her mom, Sara, recorded her testimony from the front row. "It is shameful that so many Americans — 150,000 — die prematurely each year from preventable pollution-related causes.” 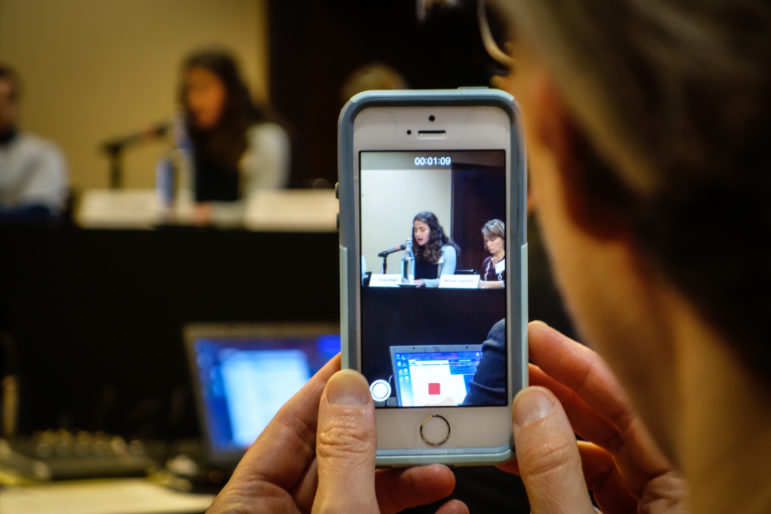 Luke Chinman, another sophomore at Allderdice, whose dad drove him to the hearing, said he was nervous to speak because it would be his first time in front of a crowd.

"Over my lifetime, I have lived in two cities: Los Angeles and Pittsburgh. These cities are both on the list of top-10 most polluted cities in the United States,” he said. “The car emission standards were a promise to the American people to protect our lungs, throats and reduce our risk of cancer. With these rollbacks, the Trump Administration is breaking that promise and instead prioritizing the fossil fuel industry.”

"Ozone is known to trigger health problems, particularly for children, the elderly and people with existing lung diseases. Only EPA has the authority to control vehicular emissions. This rule change diminishes the most significant part of our ozone reduction strategy. We need the EPA to protect the public’s health by supporting the national health-based ozone standard."

Renee Havener, a former hospice nurse, took the day off from work and drove from Syracuse, New York, to speak on behalf of her patients who struggle with chronic respiratory diseases. She said she planned to do an exercise with the crowd to emphasize the impact on her patients.

"I’m not always willing to buy whatever an environmentalist organization says simply on the grounds that the goal is environmental protection. I’m more interested if it’s a successful strategy… Initially I thought I would find [the Obama rule] does some good, but a lot of it is washed out [by economic impacts]. That’s not what I found. Everyone arguing for it had lots of arguments to back it up and everyone arguing against it was using cherry picked data or ideology, and that wasn’t very convincing." 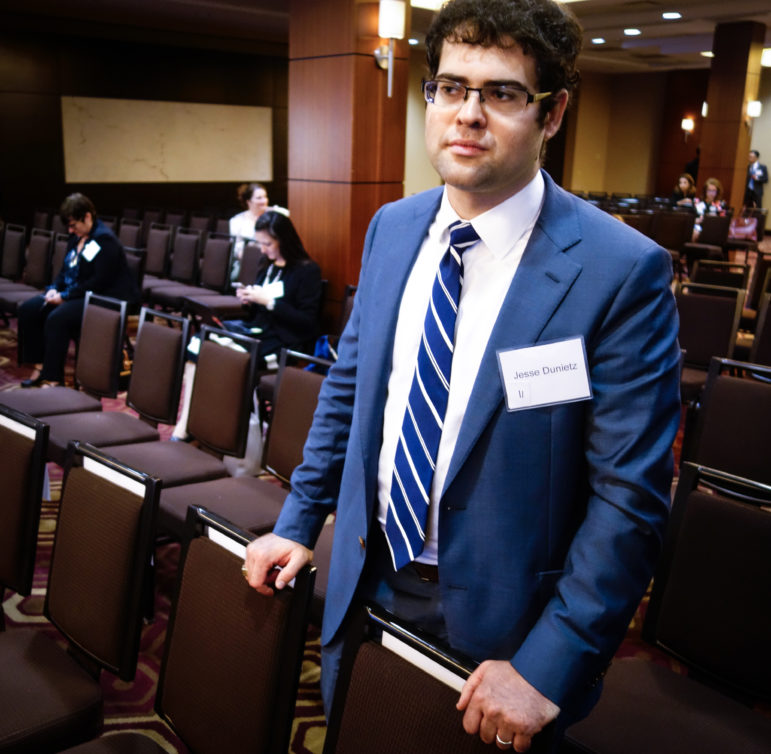 Jesse Dunietz said he was skeptical of the environmental arguments for increasing fuel efficiency standards but, after studying them further, he was convinced that higher standards were backed by the evidence. (Photo by Oliver Morrison/PublicSource)

Michalek pointed to a study that showed cars had increased their horsepower or fuel efficiency by 2 percent per year for more than two decades and the government’s own assumptions show these improvements would continue past 2021. And because the Clean Air Act states that the rules must be set as high as possible, the new rule doesn’t comply with the law.

Michalek was also critical of the new models used to predict how much the price of vehicles would increase under the Obama rule, which to his knowledge, have not yet been peer reviewed.

“I remember the first time I struggled to breathe — I was running with my dad down Main Street and had to stop about half mile from our house… Too many kids worry about when they’ll have their next asthma attack. A rollback of the current cleaner cars standards would put people with asthma disproportionately at risk.”

Strassburger spoke about the urgent local need for the reduction of emissions to fight climate change and its impacts. “Never before have I received so many desperate calls from residents with sewage-flooded basements, downed trees and power outages caused by the record-setting rainfall this year,” she said. "An unprecedented number of landslides this year displaced people from their homes.”

Walter Tsou, executive director of Physicians for Social Responsibility and past president of the American Public Health Association

“If you want to show boldness, consider China where if you buy an internal combustion engine car, the license plate will cost you around $14,000 U.S. dollars — not yuan, dollars. If you buy an electric vehicle, the license plate (which is green) is free or almost free… The point is that all of Asia and Europe are electrifying their transportation infrastructure at a time when we have our head in the sand stuck on gas guzzlers.”

If the Trump rule is enacted, he said, climate change could get so bad that “the only vehicle that we will need to buy is not a car. It will be an ark.” 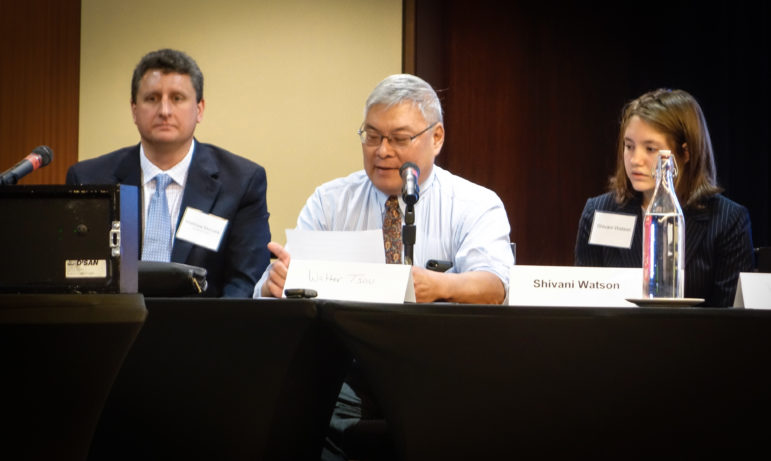 Walter Tsou, (center) executive director of Physicians for Social Responsibility, said that if the Trump rule is enacted, climate change could get so bad that “the only vehicle that we will need to buy is not a car. It will be an ark." (Photo by Oliver Morrison/PublicSource)

“As a mother, I cannot agree with any proposal that would undermine the progress that has been made with the Clean Car standards… Our future generations depend on the current generation to make sound decisions for our health, safety and environment."