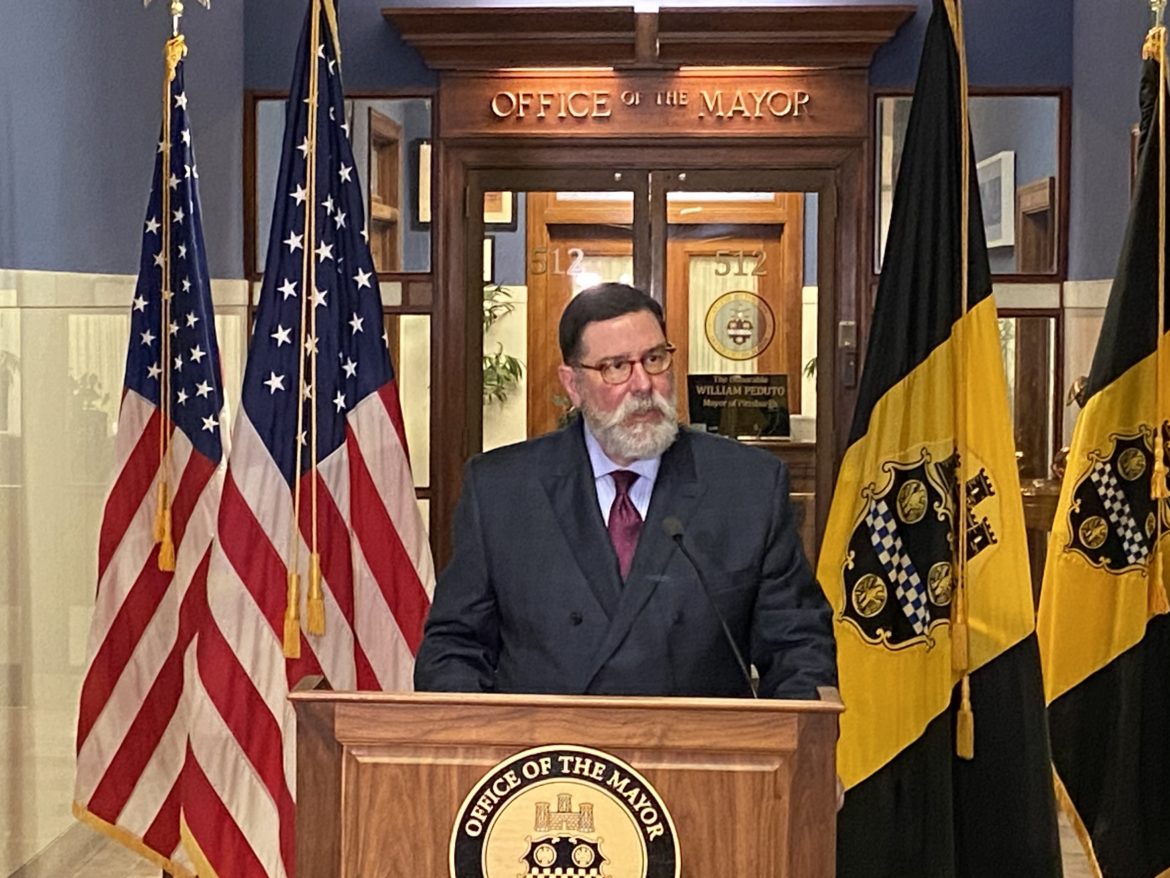 Pittsburgh Mayor Bill Peduto discusses his OnePGH plan for nonprofit, corporate and foundation investments into city needs at a press conference at the City-County Building on April 29, 2021. (Photo by Rich Lord/PublicSource)

Update (4/30/21): Pittsburgh Councilwoman Deb Gross called Mayor Bill Peduto’s OnePGH proposal “totally unaccountable to the public” in a statement issued Friday. Gross – who has endorsed mayoral challenger Ed Gainey – called the plan to empower a nonprofit board to coordinate contributions from the city’s large institutions a “shadow government” that could lead to corruption. She was joined in the statement by One Pennsylvania Executive Director Erin Kramer and University of Pittsburgh Professor Jeffrey Shook, who said that the purported commitment by UPMC reflects a fraction of the healthcare giant’s tax liability if it was not tax-exempt, and did not come close to addressing Pittsburgh’s problems including Black population loss, overpolicing and maternal mortality.

A $40 million investment by UPMC into affordable housing is the biggest piece of a raft of efforts by four large nonprofit organizations unveiled by Mayor Bill Peduto Thursday and billed as the fruits of years of work on his OnePGH plan.

The mayor said he had commitments from UPMC, Highmark Health, the University of Pittsburgh and Carnegie Mellon University to provide funding or services for a variety of city priorities, totaling $115 million over five years. He called those current or planned outlays “the seed money,” which would help an independent OnePGH nonprofit to double that amount in subsequent years.

Peduto and his Chief of Staff Dan Gilman said that at this point, none of the involved funding will flow to or from city government. A variety of arrangements would govern investments in children, the workforce, housing, health, the environment, recreation, mobility, infrastructure and culture. The OnePGH board, they said, would create transparent systems for tracking the investments.

The announcement comes less than a month before the May 18 Democratic mayoral primary, in which challenger state Rep. Ed Gainey has made Peduto’s relationship with UPMC into an issue. Under Peduto’s predecessor, Luke Ravenstahl, the city went to court to wring revenue from tax-exempt UPMC. Seven months into his administration, Peduto dropped that lawsuit in favor of a collaborative approach.

“There would have never been conversations with any of the four institutions if the threat of a lawsuit was hanging over them,” Peduto said at a press conference announcing the OnePGH commitments.

In a press release, Gainey called UPMC’s commitment “too little” and “too late,” saying that if the healthcare giant paid taxes to the city and Pittsburgh Public Schools district, that would amount to $40 million per year. 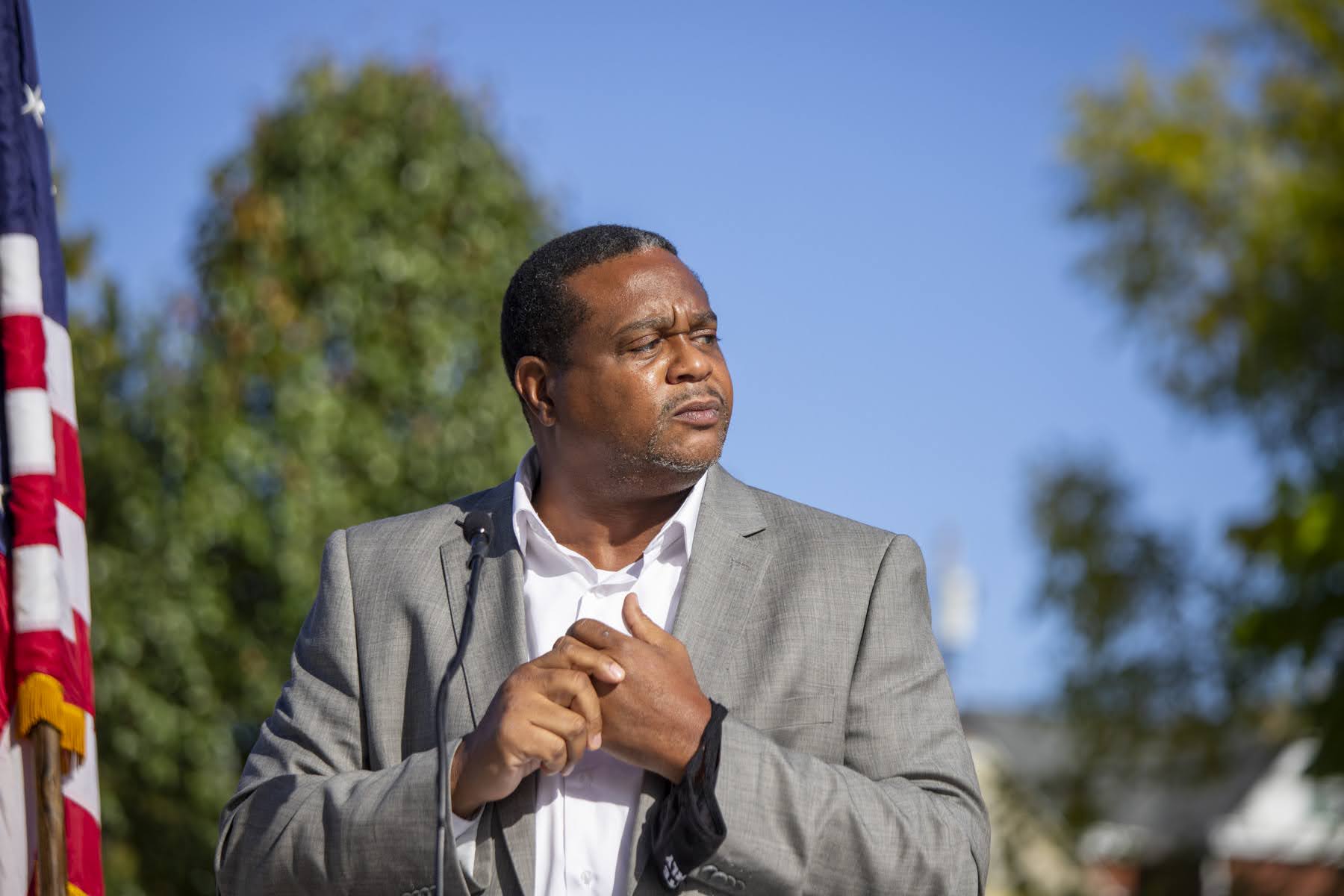 State Rep. Ed Gainey at the announcement of the "Avenues of Hope" initiative in October 2020. (Photo by Jay Manning/PublicSource)

“Now, in the final weeks of an election where Pittsburghers are standing up and demanding a mayor who will fight to make UPMC pay their fair share, UPMC comes to the table with a surprise announcement that they'll make voluntary contributions” to a “slush fund controlled by the mayor,” Gainey said in the release.

Gilman said the city approached the four institutions with a 140-page list of priorities, based on studies including the work of the Gender Equity Commission, and asked where they could help. Results include:

The administration announced that it also had a commitment from First National Bank to back an Urban Redevelopment Authority business loan fund, and had expressions of support from The Heinz Endowments, the Hillman Family Foundations and the Richard King Mellon Foundation.*

Because the involved funding won’t flow through the city, neither its nine-member council nor its controller will be involved at this stage, said Peduto and Gilman. They would become involved if the city contemplated contributing to OnePGH, or receiving money from it.

Instead, the investments will be coordinated by the board of a revamped 501(c)(3) nonprofit organization, formerly known as The Sprout Fund, but now called the OnePGH Fund.

Peduto said the process began in 2015 with a grant from The Rockefeller Foundation to study the city’s resiliency. The city’s needs were initially outlined in 2017. In 2018, the administration convened more than 100 organizations to discuss the effort. In 2019, the city worked with the Bloomberg/Harvard Leadership Initiative and Fourth Economy Consulting to hone the city’s needs into an “investment prospectus.” And last year, in a process delayed by the COVID-19 pandemic, leaders of the city and the four big nonprofits communicated about the commitments.

Gilman said there were no hardball negotiations between the city and the big nonprofits. He said the city presented its needs and asked representatives of each to go back to their leaders or boards to find ways to contribute.

“Then they went back and really started to get creative,” he said. Some found initiatives in their existing plans which dovetailed with the OnePGH goals. “If we had just said, ‘What is the number that you can do?’ it would have been much lower” in terms of total commitments, he said.

The city has made a variety of efforts to tap its large, tax-exempt nonprofits since it fell into financial distress in 2003. Peduto said those efforts yielded just a total of around $34 million in contributions to the city through 2020.

He said the OnePGH model harkens back to the collaborations of the 1950s between Mayor David L. Lawrence and the city’s corporate community.

“This announcement today of the commitment of our four largest institutions, the rudders and the engines of today’s Pittsburgh economy, recognizes how much our city has changed but how much it is the same: That if we all work together, everything is possible,” he said.

*PublicSource receives funding from the Hillman Family Foundations, The R.K. Mellon Foundation and The Heinz Endowments.