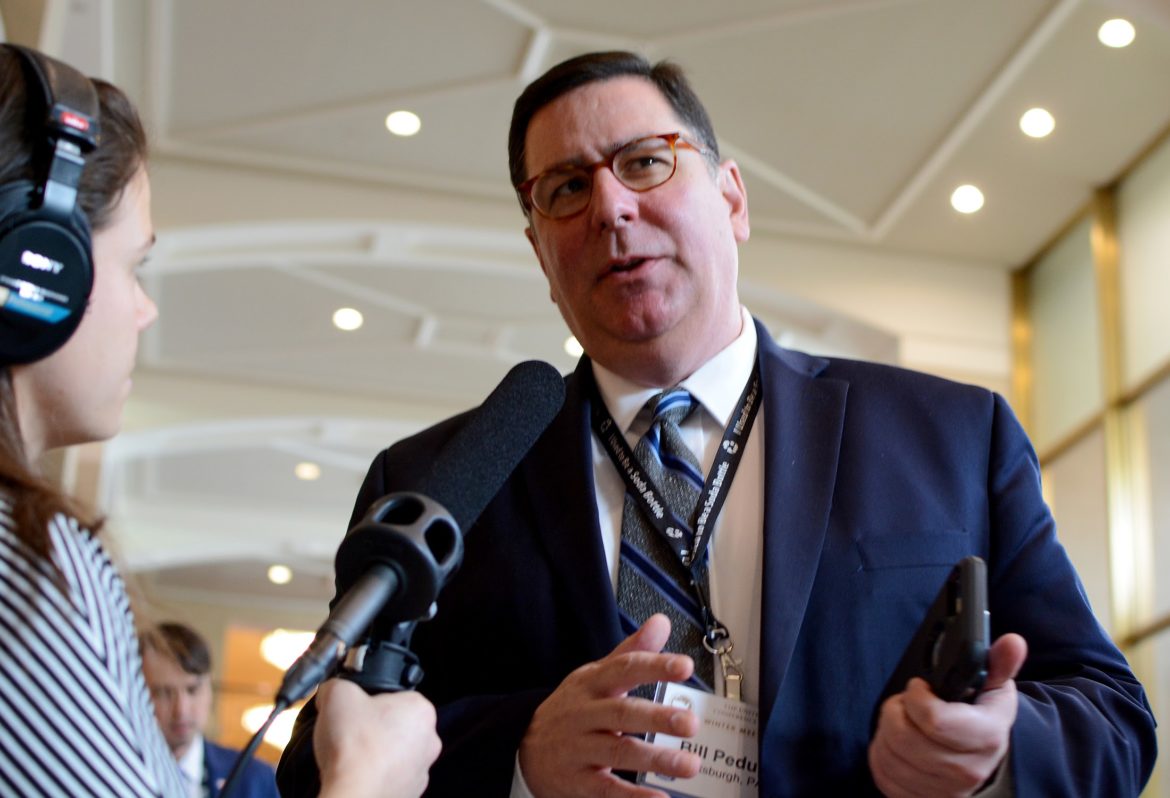 Soon-to-be Vice President Mike Pence was on the stage speaking before a packed ballroom at the 85th winter meeting of the United States Conference of Mayors. Peduto sat in the back listening along with other mayors, aides and staffers.

Pence’s speech, delivered to an audience of about 500 people, focused little on the nitty gritty — he advocated for infrastructure investment, education reform and more support for law enforcement, but he didn’t go into details on policy plans or execution.

The former Indiana governor catered to his audience, emphasizing that “mayors are on the front line of public service,” and that “this new administration will work in partnership with city halls all across America.”

He then repeated himself. It sounded nice — which three topics better summarized the broad strokes of governing a city? But Peduto craves real answers — answers to how he could find funding for affordable housing and quality pre-K programs, fight the opioid crisis amid threats of repealing the Affordable Care Act, or maybe even build a regional light rail system.

“Almost everybody has questions about what the next four years will mean for cities,” Peduto said. Questions about issues affecting citizens’ lives as well questions about how to govern, that he and more than 300 other mayors would try to answer throughout 40 task force meetings, committees and press conferences crammed into 48 hours. There would be speeches and interviews and Mayor Jim Kenney of Philadelphia’s confession that he’d take “George W. back in a minute..."

Despite the shroud of uncertainty, Peduto, who is seeking re-election this year, feels confident in the direction he is taking Pittsburgh — the direction of a shining 21st century tech metropolis that often seemed the talk of the conference. But the mayor also acknowledged that not everyone will benefit from the deals made to reach that sparkling future.

While some at the conference seemed fearful of what the new administration may mean for their cities, of broken ties and funding gaps, to Peduto, it’s the acceleration of a trend for which he has prepared. Peduto has attended the conference each year he has been in office, and often runs into familiar faces among the attendees, who are not only mayors but also business leaders and representatives of national foundations. (Stephen Caruso/PublicSource)

Rather than viewing governing as a top-down model of federal laws imposed upon constituents, he says a mayoral duty is “to bring people together… to build a vision. That means nonprofits, foundations, institutions, corporations and other government agencies.”

“I believe the new model is on cities or regions,” Peduto said.

Peduto likens the changes Pittsburgh is facing to the Industrial Revolution that first put Pittsburgh on the map. And as he feels that “we’re getting our clocks cleaned by Germany and Japan” in automation and industrialization, his goal now is to focus on making sure Pittsburgh is ready for whatever crisis comes next.

He noted that there isn't money in Washington, D.C., or Harrisburg to fund everything taxpayers want — from affordable housing to better public transit — so the onus is on him to work with Allegheny County and Pittsburgh’s institutions like Carnegie Mellon University, the Heinz Endowments and UPMC as well as national corporations like Uber to turn citizens’ needs into reality by bringing these partners to the table and soliciting support.

But for all hype surrounding self-driving Ubers and advanced manufacturing, back in Pittsburgh, Helen Gerhardt, a community activist with Homes for All Pittsburgh, shared criticisms of the mayor.

“I know this city needs to afford and advance fair housing,” Gerhardt said. “He has not stood up for the people who need him most.”

Gerhardt supports Peduto’s use of the “bully pulpit” to defend immigrant communities in Pittsburgh, but she worries that the mayor’s partnerships may not be for the best.

“I think cooperation is great if it’s in service of civil rights, inclusive rights, but [not] if our challenges are being used as an excuse for allowing more power for corporations and big business that don’t uphold the health of the community for everyone,” she said.

She was especially critical of the mayor’s relationship with Uber. She doesn’t believe the company’s drivers get a fair deal. Peduto contends that the city’s relationship brought 600 jobs, all paying $20 an hour or better, while spending zero government dollars — something he knows of few other mayors accomplishing.

The mayor and Pittsburgh drew compliments throughout the conference. Some mayors who knew him, like Mark Holland of Kansas City could say a good word in spite of the Steelers’ recent playoff victory against his hometown Chiefs.

“Pittsburgh is one of the cities that is leading the way,” Holland said. “[Peduto’s] leadership is key in that.”

During a meeting on advanced manufacturing, the speaker gave a shout-out to Peduto without knowing he was in the room.

Peduto also had a chance to showcase the city himself during a panel on innovative ideas. He effortlessly weaved together the story of Pittsburgh’s fall and rebirth, from hard-nosed steel town to millennial tech mecca, in just three minutes, with no slides or preparation.

As he walked out, a few mayors of smaller cities stopped him, trading business cards to try and get tips for their own city.

Later, looking down from the second-floor balcony on a hectic scene of mayors still chatting policy after a whole day of nothing but policy, Peduto seems energized. He waves his hand slowly across the swirling soiree of suits.

“These are my people,” Peduto says. “Mayor is the best job in the world.”

Stephen Caruso is an intern for PublicSource. He can be reached at stephen@publicsource.org.

One thought on “Peduto lauded among U.S. mayors, but knows Pittsburgh has much more to figure out during Trump presidency”