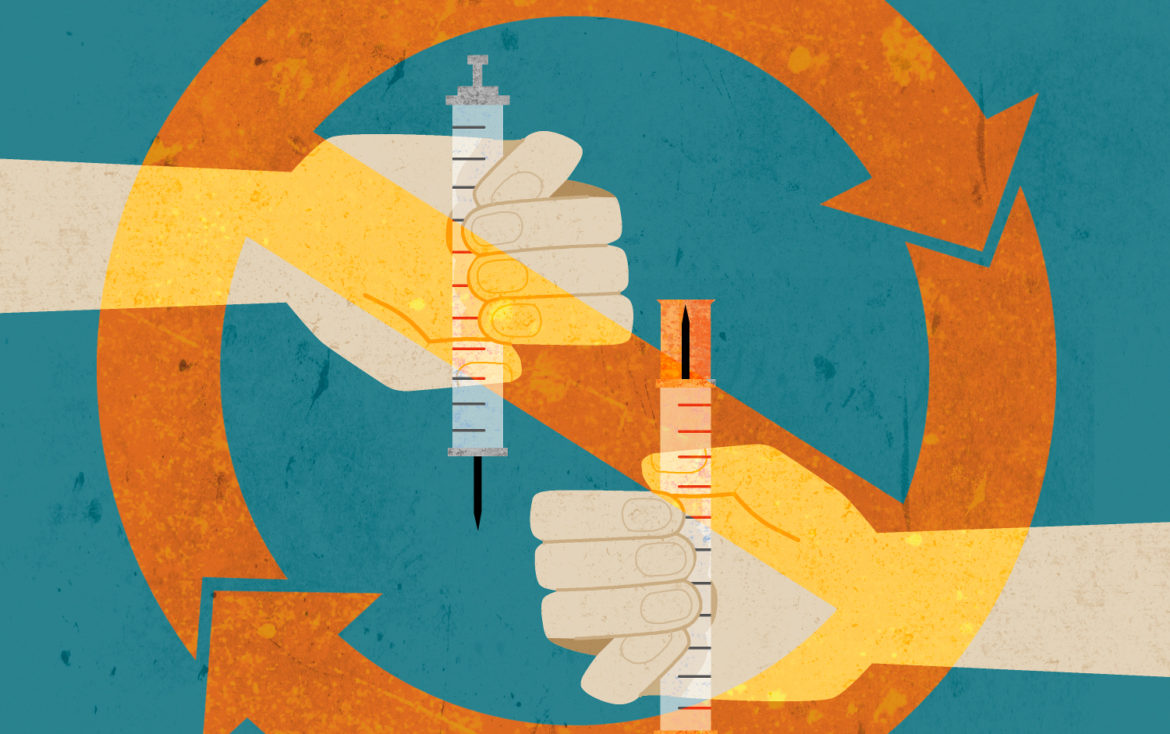 Tens of thousands of Pennsylvanians crave daily injections of heroin. Beyond the threat of overdose is the threat of being exposed to HIV and hepatitis C, both deadly and expensive illnesses that are easily spread through contaminated needles.

But in Pennsylvania, distributing sterile syringes is a criminal act.

For years, Dianna Pagan feared that giving out clean syringes in Reading would land her in jail. Officials there recently agreed to let her needle exchange operate, though she’s faced numerous setbacks for more than a decade, including being shut down following the threat of prosecution.

“There’s no protection,” said Pagan, who contracted HIV while using drugs at age 19. In an effort to help others, she started distributing clean needles more than 15 years ago through Reading Risk Reduction.

Only in Allegheny County and Philadelphia have local leaders publicly supported needle exchanges, essentially ignoring state law out of concern for public health.

“We have laws on the books that are causing needless illness and death,” said Caroline Acker, who helped start Prevention Point Pittsburgh in 1995, back before local officials gave it protection.

Most of Pennsylvania’s neighboring states have explicitly authorized at least some needle exchanges, as have other states hit with an injection drug crisis.

Meanwhile, Pennsylvania has seen an increase in heroin use and in acute hepatitis C, though the state’s health and drug treatment agencies say they lack the authority to fund or implement exchanges.

Needle exchanges in Pennsylvania are nothing new.

In the midst of an HIV crisis in the early 1990s, volunteers in Philadelphia began passing out clean syringes, targeting a high-risk population at a time when injection drug use was tied to nearly half of all local HIV cases.

Exchanges operate under the assumption that drug use won’t stop just because clean needles aren’t available.

In 1992, then-Mayor Ed Rendell, a Democrat, declared a public health emergency, putting the weight of his office behind Prevention Point Philadelphia, the state’s longest-running syringe exchange.

The state threatened a crackdown, but none came.

Now only about 5 percent of new HIV cases in Philadelphia are spread through syringes, according to the city’s AIDS Activities Coordinating Office.

In 1995, volunteers from the unaffiliated Prevention Point Pittsburgh set up card tables to distribute clean syringes and safely dispose of used ones.

Early on, workers faced the threat of arrest and pressure from unhappy neighbors to move elsewhere.

But the county health department eventually embraced the program, giving it regular space to distribute and collect needles. It was authorized by the Allegheny County Council in 2008.

So, the state’s two largest cities accept needle exchanges as effective interventions. But Pennsylvania’s heroin crisis affects small cities and rural areas as well. And when needles are shared, outbreaks of HIV and hepatitis C can follow.

Underground exchanges are operating in Lancaster and Harrisburg, both with implied support from local officials, as well as in Reading.

Scott Burris, professor of law at Temple University, says the flare-up of HIV in the state of Indiana should serve as a cautionary tale.

More than 140 people tested positive for HIV in the state’s Scott County, which has about 24,000 residents and an injection drug problem. Indiana’s governor opposed needle exchanges in the past but signed a bill to authorize exchanges during health emergencies.

“That should be a warning for every small Pennsylvania city and town,” said Burris, who has studied needle exchange and drug paraphernalia laws nationwide.

In rural areas, Burris said, drug users are part of a close-knit community. They tend to know each other, and they tend to inject together.

That means if one person has a bloodborne disease, it can spread quickly to anyone sharing the same needle. HIV and hepatitis C can spread to non-drug users through other means, including sexual contact.

Both HIV and hepatitis C can be deadly and are extremely expensive to treat. Hepatitis C can be even easier to contract than HIV, meaning a new syringe isn’t always enough to stop transmission because other paraphernalia may be contaminated, said Acker, a public health historian and head of the Department of History at Carnegie Mellon University.

Nationwide, acute cases of hepatitis C spiked 75 percent from 2010 to 2012, which the Centers for Disease Control and Prevention attributes mostly to drug use by young, white people in non-urban areas.

In Pennsylvania — which has a drug problem that includes that exact demographic — acute cases of hepatitis C more than doubled over the same period. The state has not pinpointed a cause for the increase.

Both the Pennsylvania Department of Health and the Department of Drug and Alcohol Programs say they want to prevent the spread of bloodborne diseases. But they also lack the authority to implement or invest resources in needle exchanges.

“We are looking at actions that other states are taking to address mitigating the spread of HIV and hepatitis,” Amy Worden, communications director for the Department of Health, said in an emailed statement on behalf of both agencies.

Despite public health research that supports needle exchanges, state law continues to say that distributing syringes for drug use is illegal.

If you support or oppose a change in law, let your state senator and state representative know.

If you support local changes, contact your city and county government.

If you support or oppose federal funding for needle exchanges, contact your senator and representative.

Pennsylvania gives no money to exchanges, and Congress in December 2011 reinstituted a decades-old federal ban on funding exchanges. This means programs are dependent on limited private grant money and local support.

Rep. Charlie Dent (R-Pa.), who currently sits on the congressional subcommittee that oversees HIV-related spending, explains why he’d like the ban to continue.

To him, harm reduction means interdicting drugs and getting users to treatment. It doesn’t mean supporting exchanges.

“It does not make sense for the federal government to hold the use of heroin to be illegal while at the same time funding the distribution of the paraphernalia required to use the drug,” Dent said in an emailed statement.

Exchange opponents argue that the programs encourage drug use, saying in essence that fewer people would inject heroin if fewer sterile syringes were available.

The federal funding ban was lifted briefly in 2009, with support from the Obama administration and AIDS activists.

After two years, however, the ban was reinstated, despite the CDC’s embrace of needle exchanges as an effective intervention to control bloodborne diseases.

The research on bloodborne diseases has existed for many years and is backed by public health experts across the country, including those in Philadelphia and Pittsburgh.

In 2009, the state’s Board of Pharmacy made syringes available without a prescription, a move that signals support for increased access despite state law.

Barriers remain because pharmacists are empowered to decide if they want to sell syringes to customers they suspect of using drugs. Carrying a syringe for illicit drug use is still illegal.

The state has previously said its funding ban keeps it in line with the federal government.

Burris refutes this notion, saying the state should be free to spend its own money as it sees fit, just as Philadelphia spends its own local money on its exchange.

“There’s really no good reason we couldn’t have needle exchanges across the state wherever people are injecting,” Burris said.

With states like Indiana supporting needle exchanges — at least minimally — and Gov. Tom Wolf’s recent embrace of the anti-overdose drug naloxone, supporters are hopeful that needle exchanges can come up from the underground.

Change could come in several ways.

One could be executive action from Wolf, similar to what Pence did in Indiana or what former Gov. Rendell did on a smaller scale as mayor of Philadelphia.

“The governor could say, ‘Look, this is a health emergency,’”  said Benitez, of Prevention Point Philadelphia.

A representative from the governor’s press office did not respond to inquiries about Wolf’s stance on syringe exchanges.

The governor, however, wants to limit the spread of HIV and hepatitis C, deputy press secretary Ajeenah Amir said in an email statement.

That includes working with state agencies and communities to “promote awareness about the dangers of contracting disease through shared needles,” the statement said.

Lawmakers in Harrisburg could also remove the word “syringe” from the state’s paraphernalia law, something several other states have done already.

If syringes aren’t explicitly named, supporters said, programs would have more protection to hand out clean needles without worrying about law enforcement.

Or local governments could follow the lead of Philadelphia and Allegheny County and either declare a health emergency or pass a local ordinance to authorize exchanges.

For volunteers like Pagan, that would mean harm reduction gets an official blessing and public health efforts would no longer be at odds with state law.

“They’ve been doing it here for more than 20 years in Philadelphia,” Burris said. “And the sky has not fallen.”