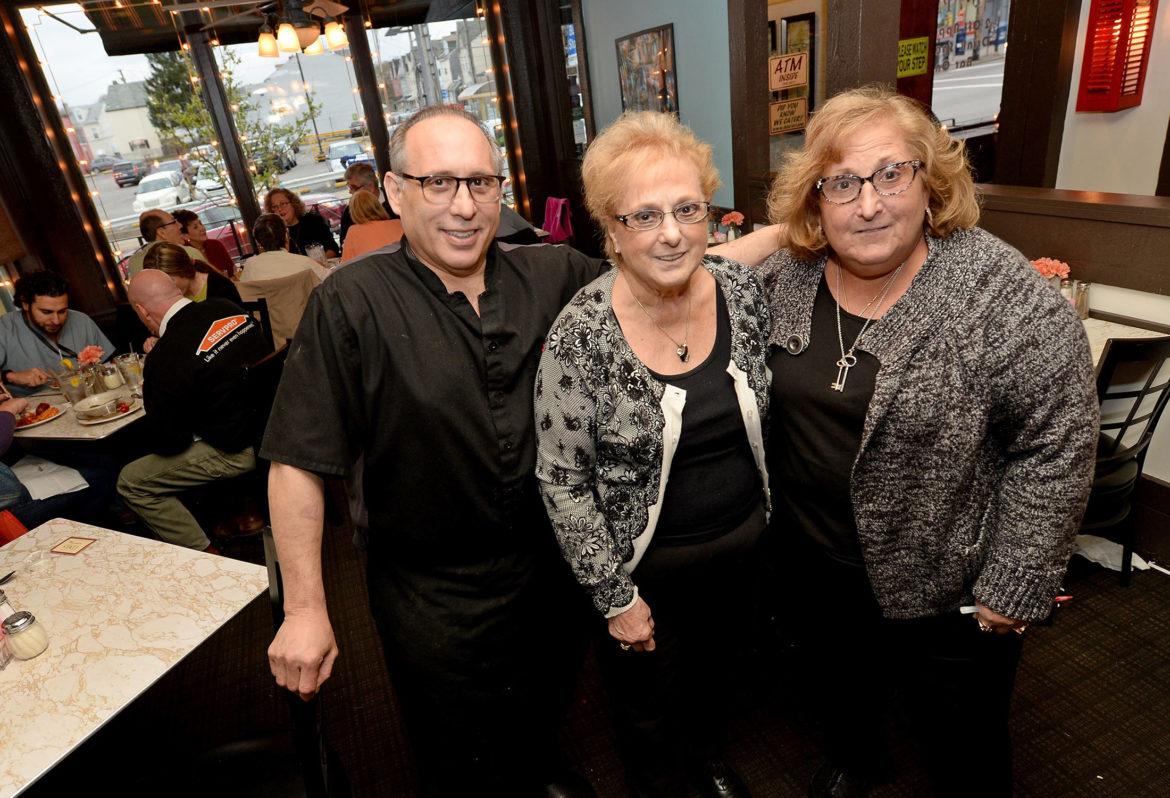 A 2012 episode of the Food Network’s "Restaurant: Impossible "focused on the rehabilitation of Del's Bar & Ristorante DelPizzo. However, Marianne DelPizzo (right) and the other owners, her brother, John, and their mother, Josephine, closed the business a few years later. (Copyright ©, Pittsburgh Post-Gazette, 2017, all rights reserved. Reprinted with permission.)

Marianne DelPizzo admitted it on TV. Celebrity chef Robert Irvine’s Italian wedding soup cooked in her Bloomfield bistro, Del’s, was better than what the restaurant had been serving for years.

The Food Network’s “Restaurant: Impossible,” which Irvine hosts, had swooped in to Del’s, threw out the tacky, flower-print tablecloths and introduced new menu items in a full makeover that seemed like it would save the failing restaurant.

But in the end, “Restaurant: Impossible” made off better than Del’s.

While the restaurant did not benefit from the show enough to survive financially (Del’s closed in 2015), the show benefited by utilizing the state-run film tax credit program.

But nearly every production has turned around and sold the credit. Those sales have created a nearly $300 million cottage industry for unused tax credits, meaning tens of millions of dollars that the state earmarks for TV and movie projects each year end up allowing non-film companies, like Duquesne Light Company and Apple, to benefit.

These cases are not unique.

About $288 million of the tax credits approved have been redeemed. Roughly 99 percent have been sold to other companies that never step foot on a set. The records PublicSource obtained from the DCED do not signal what is happening with the other $233 million. Much of it could still be in the three-year period the companies have to decide if they will use or sell the credit.

The development of a secondary tax credit market troubles Jane Earll, a former Republican Pennsylvania state senator from Erie who sponsored the bill that first put the film tax credit in place; it is “completely contrary” to the program’s design. The rationale for the program was simple, she said, to incentivize a film industry to grow in Pennsylvania.

But without the potential for reselling the film tax credits, the program may never have taken off. The ability to sell any unused credits for cash remains an incentive that has helped to attract the film and TV industry in the state.

“If [the tax credits] weren’t transferable, no one would be able to use them and then no one would film in Pennsylvania,” said Josh Lederer, who brokers these kinds of deals, and said he typically takes home a commission of about half to 1 percent of the credits he helps to sell.

Indeed, there is an incentive to make the credits transferable. If film companies couldn’t get rid of credits they don’t use, they become more of a hassle than they’re worth, potentially driving the companies to other states.

In the case of “Restaurant: Impossible,” the show received close to $1.88 million in tax credits between 2011 and 2013 to film five episodes in Pennsylvania. Butler companies Gustine Investments and Armstrong Utilities purchased every dollar of these credits in 2013. Those two companies used the credits to offset their capital stock and franchise taxes.

Hundreds of other production companies also sold tax credits they received to other corporations. Here are some notable examples:

The film “Foxcatcher,” which starred Steve Carell and Channing Tatum, which was partially filmed in Pittsburgh and Monroeville in 2013, received a $5.4 million tax credit that it later sold in full to Apple.

And Camelot Communications Group received nearly $70,000 to film commercials and promotional materials for UPMC between 2010 and 2014. In total, the group used $68 of the credits and sold the rest to Duquesne Light and the Nestle Purina Petcare Company.

“It’s certainly not intuitive that you’d get a tax credit and then sell it, and it’s not intuitive because it’s a really bad policy,” said Scott Drenkard, director of state projects at the Tax Foundation, a conservative-leaning research group and think tank. The buying and selling of tax credits is baked into Pennsylvania’s tax code. This market can exist because the tax credits are transferable and have few restrictions for how they’re used. That means it’s perfectly legal for a film production company to sell their unused tax credits to another company.

In the end, the film companies get cash and other companies avoid paying taxes.

The rationale for the tax credit is companies that film in Pennsylvania will hire local people to do some of the jobs on set and the out-of-state crew will stay in hotels and eat at restaurants here, all things that stimulate local economies.

The state’s Department of Community and Economic Development [DCED], which oversees the film tax credit program, said in its report to lawmakers in fiscal year 2015-16 that the program has generated an estimated $3.65 billion in total economic activity since 2007. This figure includes the money spent by film crews staying at local hotels and eating at restaurants and buying equipment in the state, among other expenses.

“If [the tax credits] weren’t transferable, no one would be able to use them and then no one would film in Pennsylvania.”

The DCED uses the “economic impact” figures that measure how much money was spent in the state and how much the state made in taxes as rationale for the high rate of tax credit sales. In response to questions from PublicSource about the massive amount of credits sold, the DCED said it was only following what the law said it could do and reiterated that the program still provided an “economic stimulus” for the state.

Economists and lawyers have questioned the state’s economic impact figures, saying they’re inflated. Two think tanks in Pennsylvania, The Tax Foundation and the Commonwealth Foundation, have written several reports and blog posts pointing out that Pennsylvania’s analysis of its program operates on the assumption that no films would be shot in the state if the tax credit didn’t exist, a claim the Foundation says is bogus in part because filmmakers had been shooting in Pennsylvania decades before the credit existed. Additionally, the Tax Foundation has called into question the state’s use of an economic model that assumes every dollar spent in tax credits generates more than one dollar in return.

The DCED has also rebuffed the state Auditor General who pointed out a lack of transparency and oversight in the department in a 2014 audit. In response to that report, the DCED said it “was peppered throughout with general comments that seem more like opinion than fact” but said it had addressed the issues of oversight the Auditor General raised.

No credit resale, no films?

Amid the disagreements about the tax credit’s benefits, the sales continue. The way these sales happen is wonky but follow the same general pattern: A production company with unused or leftover credit approaches a broker who connects them with another company who wants to buy the credit.

One of those brokers, Josh Lederer, who is the vice president of Fallbrook Credit Finance in Calabasas, Calif., said the process is pretty simple. He helps the two parties negotiate and write up a purchase agreement, then file a transfer request with the state. In Pennsylvania, that request comes in the form of Appendix K, a form that both a buyer and a seller must fill out.

Heidi Havens, a spokesperson for the DCED, said each Appendix K form is evaluated individually before it’s sent to the Department of Revenue for approval or rejection. According to Kevin Hensil, a spokesperson for the state’s Department of Revenue, a transfer request is only denied for a range of technical reasons, including if a company did not fill out the form correctly, tries to sell more credits than they have available or tries to use the credits retroactively. Additionally, Hensil said both buyer and seller have to be up to date on their tax payments for a transfer to be approved. The “Those Who Kill” crew filmed on Wood Street in Braddock in September 2013. (Photo by James A. Mahathey)

The ability to transfer tax credits is key to the program and the secondary market it’s spurred. The way Lederer sees it, the program causes film companies to want to come to Pennsylvania. “Any industry you want more business in, you need to subsidize it,” he said.

But he thinks none of them would choose the state if they knew they couldn’t unload the tax credits they don’t use. What good are Pennsylvania tax credits to a Hollywood company after they’ve gone home?

According to Drenkard, the state would be best off if it eliminated transferability and looked into ways to reduce waste.

Earll said if the state is going to continue to allow transferability, it should establish stricter rules about how companies that receive tax credits use them. The current rules allow any company to buy a tax credit and use it to pay off up to 50 percent of its tax liability.

Earll, who now works as a political consultant in Harrisburg, said solutions start with how the state assesses the program. The program was originally designed “with the understanding there’d be an honest-to-goodness analysis every year based on experience, not projected figures.”

In Earll’s view, lawmakers should be concerned.

“I’m surprised no one in the Legislature is jumping up and down about this,” Earll said.

The Fund for Investigative Journalism helped to fund this project.