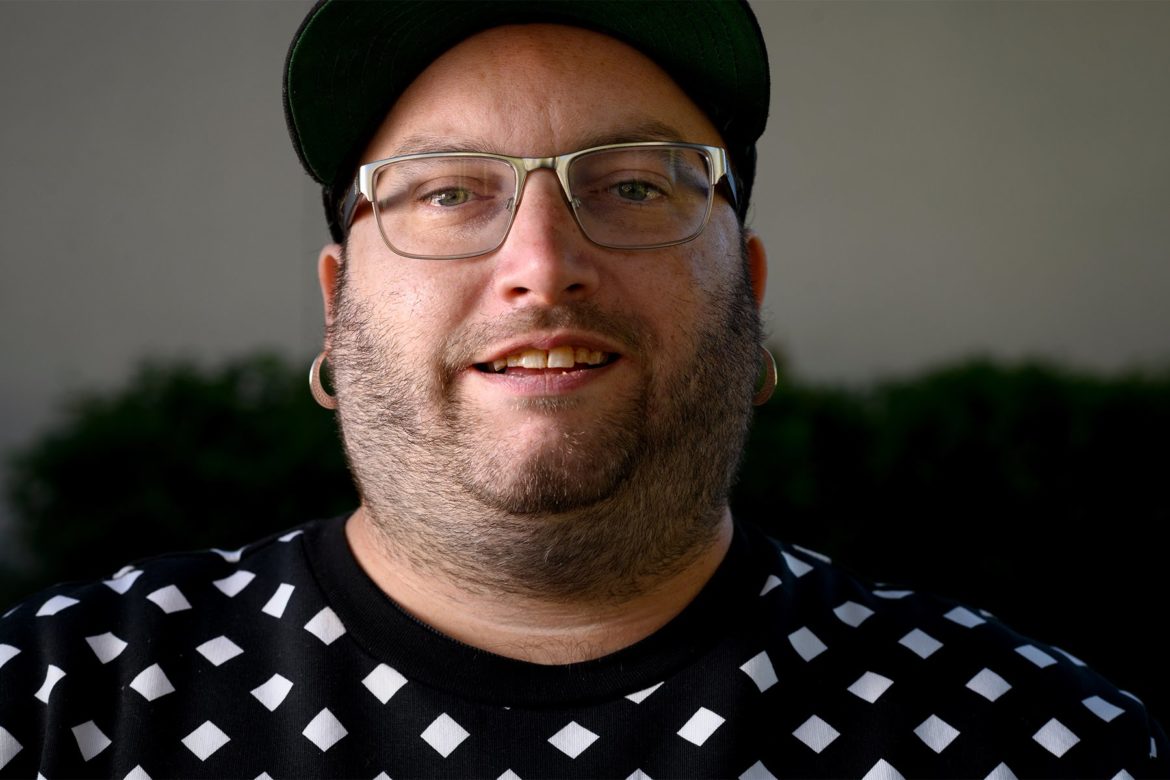 Jordan Pearlman, 37, of Squirrel Hill, who lives with OCD and bipolar I, is photographed in Squirrel Hill on Tuesday, Oct. 8, 2019. (Photo by Justin Merriman/PublicSource)

In March 2010, I planned on pitching my dream. I went to an event for the Pepsi Refresh Project, an initiative where Pepsi offered grant money for community empowerment projects. I wanted to start an urban arts community center that would incorporate the elements of hip-hop, like production, DJing, graffiti art and dance.

In the middle of the event, I had a manic episode.

I didn't know what was going on. I thought I had died. I started asking people if I was in heaven. Instead of taking me to a hospital, the police arrested me.

When I was released from jail eight hours later, I was still manic. I thought I was the hip-hop messiah and that I was going to bond the West Coast and the East Coast. Then I thought I was the actual Messiah, sent by God to deliver His message to the world. That lasted for a good five or six months. It may sound funny now, but there’s no higher high than thinking you’re God — and no lower low than realizing you’re not.

The following year, I hit rock bottom. I’d been suffering from severe undiagnosed obsessive-compulsive disorder [OCD] my whole life, and I’d been battling substance use disorder as a way of self-medicating and keeping my illness under control. I knew then that I had to get sober. That’s when my recovery journey began.

I’ve been sober since Sept. 1, 2011. Shortly after, I was diagnosed with extremely severe OCD in addition to bipolar I disorder, a type of bipolar disorder that includes manic episodes.

For me, OCD is a daily and constant torturous disease.

One symptom of my OCD is intrusive thoughts. If I have a question or I didn't hear something right, I’ll repeat it to myself over and over again. The demons in my head are always telling me, “You're not good at this. You tainted this. You're slow at this. You didn't hear it right, so you have to hear it again in your head, until you hear right over and over.” I’m scared to think, because any single thought can turn into a vicious cycle that can last for months.

It feels like someone took my brain out, wrapped it in poison ivy, put it back and said, “If you itch it, it'll get worse.”

In college, my OCD demons told me there was a specific word I had to keep repeating over and over in my head or else something bad would happen. I repeated that word nonstop for six months. I must’ve said it to myself hundreds of thousands of times. I don't want to repeat the word here.

Sometimes I think something bad is going to happen if I don't tell someone else the thoughts I’m having. I often confess them to my Alcoholics Anonymous [AA] sponsor or my mom. I feel awful doing it.

A lot of my OCD intrusive thoughts revolve around possible contamination from substances. Even just the smell of marijuana makes me think I’m high.

One time, I was standing in an elevator with a woman who was holding her baby in one hand and a beer in the other. Wanting to make the baby more comfortable, she asked me to hold her beer. So I held it. And I started worrying that maybe the fluids from the beer can had somehow gotten inside my hand and affected my sobriety. I ruminated on it for months.

I don't know a single other person in AA that truly believes if they touched a beer can, alcohol would enter their system through osmosis. I worry all the time about “cheating” my sobriety — I don’t want any amount of substance to enter my body whatsoever.

Like a lot of people with OCD, I do rituals around the house. Before, in order for my brain to say the lights were off, I had to feel pain in my fingers. I would shut the light switch off so hard that, to this day, I can’t feel the tips of my fingers.

People often say things like, “Oh, I'm OCD” or “Oh, my OCD makes me do this.” But that's not the 2% of people that truly suffer from OCD. My OCD affects my thoughts every second of every day. It's really, really scary. Sometimes I think about it, and I'm so scared at how sick I am.

I can honestly say that getting sober is the best thing I've ever done. It brought me closer to my mom and other people who care about me. But because I’m not self-medicating for mental illness, my symptoms can feel twice as bad.

In the past few years, I’ve been through quite a few outpatient treatments, including five intensive outpatient programs [IOPs] that lasted three hours per day, three days per week for about three months. I also went through one partial outpatient program that lasted up to eight hours per day for between six and eight weeks. All of my treatment has been voluntary and allowed me to live at home. I've been blessed to have never had to be involuntarily hospitalized or had an inpatient stay for mental illness.

I'm still on a decent amount of medications, but they haven't really worked, so my social support system helps keep me on track. I regularly go to AA, two OCD peer groups, an OCD therapist and a psychiatrist. I cherish my peers, both in my OCD group and in AA, as well as friends and family who support me.

My biggest supporter is my mom. I’m an only child, so we have each others’ backs 110%. She’s my best friend. I spend the majority of my time with her. But she’s 78, and sometimes I worry about what will happen if she passes before me.

Living with severe mental illness, it can be hard to do “normal things” in the real world, like go to work. In 2010, I started a new job selling patents. At the time, I still thought I was the Messiah. When I relayed the message to my manager that I thought God had sent me, I was let go. My mental illness really impacts my ability to work, but I have faith that I’ll persevere and become employed in the future.

It feels like someone took my brain out, wrapped it in poison ivy, put it back and said, “If you itch it, it'll get worse.”

Because so many other people have helped me along the way, it’s important to me to pay it forward. For the past year and a half, I’ve volunteered at the Community Resource Center in McKees Rocks two or three times a week. On Fridays, I pick up food donations and help serve hot lunches. I really just like to hang out with the people there and help out. I'm helping them, and in return, they're helping me add structure to my day.

I try to take my experience with mental illness and use it for good. I’ve wanted to be a stand-up comedian since kindergarten, so in February, I participated in Stand Up for Mental Health, a comedy event at Temple Sinai. Eight of us did stand-up routines highlighting the humor in our experiences with mental illness. I was anxious to get up in front of such a big crowd — about 150 people — but speaking in front of my AA peers helped to prepare me. Incorporating my mental health issues and making light of them even got me out of my own head for a little bit.

For the past nine years, my dream has stayed the same, to start an urban arts community center in Pittsburgh. My OCD has kept me from being able to work, but one day, I hope to open the center and serve as its executive director. Although mental illness has presented some obstacles, I still have the faith and the drive to make my dream a reality. 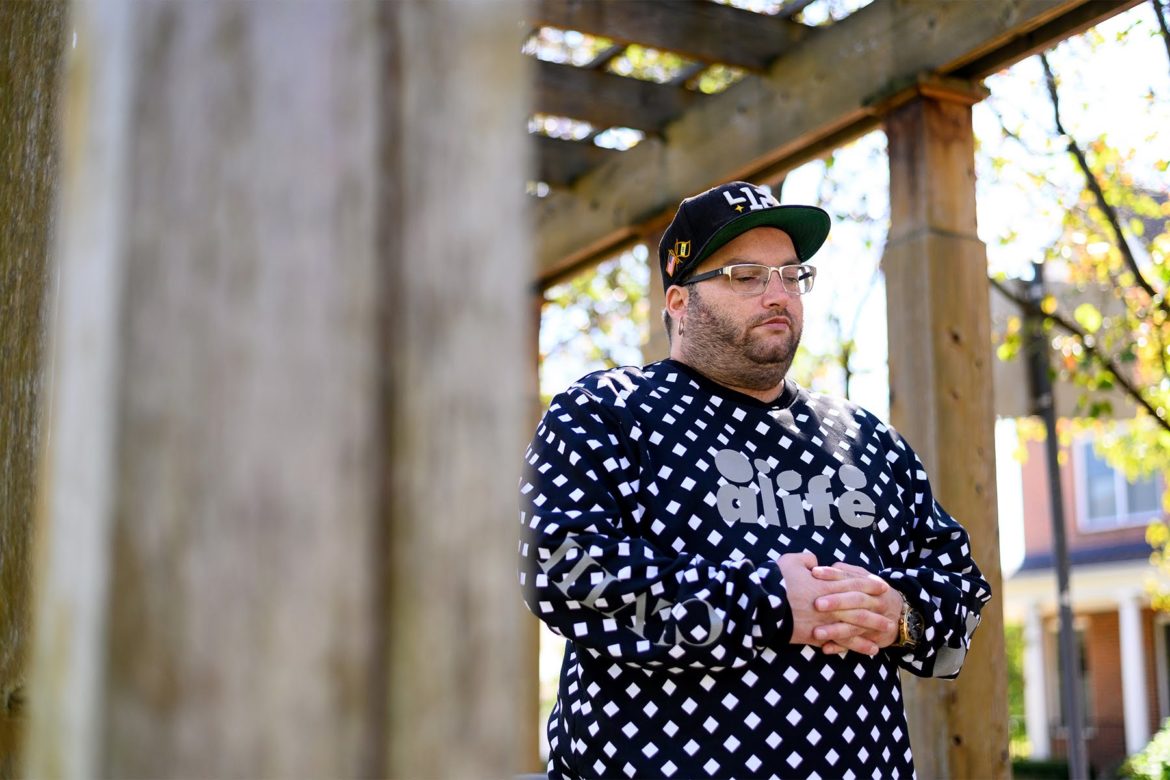 "I struggle from severe mental illness every single day. I accept that I will likely have intrusive thoughts for the rest of my life. By accepting it, it hurts a tiny bit less," Jordan said. (Photo by Justin Merriman/PublicSource)

I’m not quite where I’d like it to be in my recovery yet, but I’m really faithful to my higher power. I was raised Jewish, but certain things happened to me during that psychotic episode in 2010 that strengthened my belief in God and made me believe it would be OK to accept aspects of other religions, too. Some people want to label what I saw as hallucinations, but I label it as God putting people, places and signs in my path.

I know how fortunate I am because I’ve seen other people who struggle with OCD and addiction end up less fortunate. Riley, who was a friend of mine with OCD, also struggled with substance abuse and self-medicating. He was doing so well — he’d been sober for a few years, and he had even written a thesis about OCD and addiction. The two of us traveled to Los Angeles together where we both spoke on a panel about OCD and addiction to about 100 people. The trip was an absolute blast.

Six weeks later, I got a call that Riley had relapsed, overdosed and died. He was so intelligent and so dedicated to helping other people with OCD and addiction. I truly believe the pain of living with his OCD got the best of him. It was a tragedy.

With OCD, doing the simplest things make me happy because it's such a struggle. It’s like a full-time job in my head. If I can do anything positive — go to an AA meeting, work out, apply for a job, even just get out of bed — it's a triumph.

It’s like when the great Pittsburgh Steeler Ryan Shazier was injured and the doctors thought he wouldn’t walk again, but he stood up and took that first step. Every day, I have to stand up and take that first step again.

I struggle from severe mental illness every single day. I accept that I will likely have intrusive thoughts for the rest of my life. By accepting it, it hurts a tiny bit less.

To others struggling with mental illness:

It's OK to have your own reality. But if it starts hurting or becoming repetitive or scary, if the demons start winning, please go and talk to somebody about it. It’s OK to talk about your pain. The intensive outpatient programs aren't so bad. It's a great place to go, and they’ll accept you back again if you need it.

I don't understand the exact nature of your mental illness because everybody is different, but I understand the pain that you're going through. And my heart goes out to you.

Jordan Pearlman is a mental health advocate, a certified peer specialist and a lifelong Pittsburgher. He can be reached at pearlman331@gmail.com.

The Staunton Farm Foundation has provided funding to PublicSource to cover issues related to mental and behavioral health.